Popayán: My Hatred of Mass Tourism 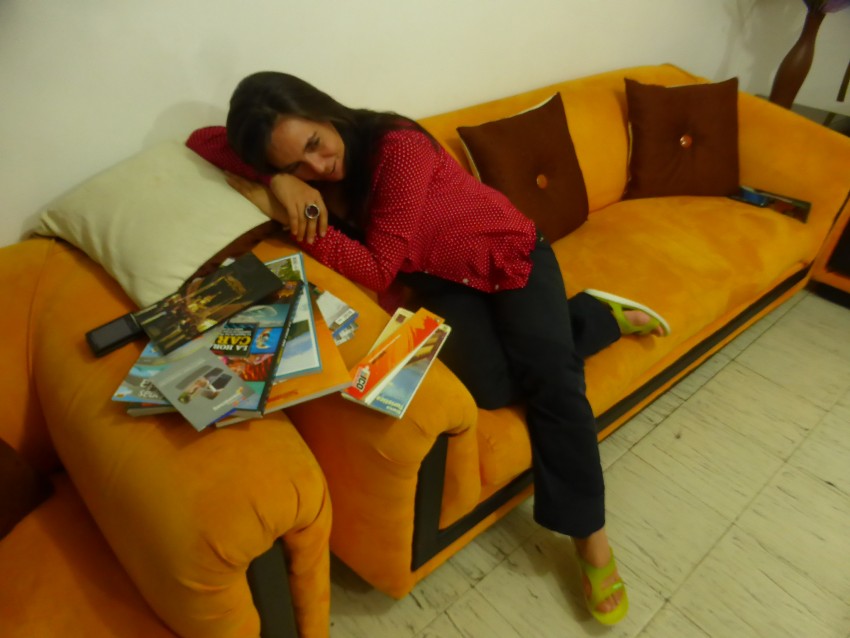 My tour guide... This is exactly how my brain felt after she talked about her country and showed me pictures for three hours, trying to be nice...

Selfish girls piss me off.  Well, selfish guys piss me off too but a selfish girl is more selfish than a selfish guy.  She seems to expect more.  When the football game has begun and you come to the hostel to meet your friend and I so that we can hurry and get to a television to watch the game and you show up late, make us wait longer so that you can go all the way up the stairs to use the toilet is unacceptable.  We will be in a bar in 4 minutes.  Then we can watch the game.  You can pee there.  That way we will not be still standing around impatiently waiting for you so that we can get somewhere.  Let’s get there.  Then you can deal with nature.  And check to see if your watch works.  Asshole…

The Germans slaughtered the Brazilians in the World Cup Semi-Final in a record 7-1 win.  No one I have talked to has ever seen such destruction.  I am faking that I am a huge fan, and I am a huge fan right now, but I am one of those part time fan jerks who I hate that show up only when the time is right.  I know just enough that I can handle a conversation about the game and the players and no one seems to pick up on the fact that I am a complete football imposter.  I really get into the games though.  There is no faking that.

I met up with Lucia at 6:00 pm and she took me to her best friend’s house to present me.  Am I getting in too deep?  I bought the groceries and Lucia cooked dinner for her friend Caro and her husband and I.  When Lucia suggested we listen to music Caro went to the youtube and put ‘Rock in English’ in the search bar to appease me and a playlist came up.  Ridiculous.

Lucia’s friends are my age and they are really nice people but I have learned a lesson; Do not ask people too much about their country.  A map came out.  Then I was shown about 700 pictures of husband Dario’s trip that he took.  People are irresponsible with their pictures.  You have to learn to read your crowd.  Show them six or seven picture highlights of what you think is awesome.  If people want more they can ask for more and they can look for more.  Do not drown them with a presentation that they are forced to look at.  Then, after the picture show, five massive magazine books of pictures came out.  Five!  Caro showed me pictures from her magazines for at least two hours.  No exaggeration on the time.  I had a hard time being polite.  It was way way too much.  And it was in Spanish so I could hardly understand what was being explained to me.  And I had to sit there through it and pay attention because the focus was on me.  It was Mass Tourism.

Caro showed me every region of Colombia, and she went through at least 900 pages of photos.  I am not even kidding.  That is why it took two hours.  I got to the point where I was really considering faking sickness to get out of the house.  I told her that I was not going to the Amazon but still I got a 200 magazine on the Amazon shown to me page by page and every fucking picture was explained to me.  I told her that I hate Mass Tourism, but I was shown 200 pages of the coffee region of Colombia that I will likely not even stop in because they confirmed to me after I said I hate Mass Tourism that it was heavily toured and full of gringos, and then after that short conversation I was shown 200 pages of that region and had about 300 pictures explained to me of a place I have no intentions of visiting.  I was shown all of the really expensive places and ritzy hotels of Mass Tourism that I would never step foot into.  Fuck me it was hard to sit though.  I started to make it obvious that I was out of care, and she noticed it and sort of made a reference to it and then still showed me another book.  I have now seen more about this country in magazines alone than I have with my eyes in 6 months of travelling nine countries through South America.  They are nice people and I know Caro just wanted to share, but wow, read your audience.  She knew I had enough after she had been through all of those magazines and then she pulled out a flyer she wanted to show me.  I put my hand on it and said, “Please, no more,” in Spanish.  Everyone thought that was pretty funny.  I was not trying to be funny.  I was just my defense mechanism from trying to not lose my shit.  Wow it is hard to be nice sometimes.

Lucia, her daughter Isabella and I left right after.  I made it clear that I was too tired to do anything else.  In the taxi on the way to my hostel I told Lucia and Isabella that I was completely destroyed from the tourism show.  I kissed Lucia goodnight, got out of the taxi and went to bed.  Fuck it is hard to be nice to nice people who are being nice but going way too far…

“I am becoming a lot more lousy on days after partying. My hangovers are not getting worse, but I am losing the ability to sleep in. Aging is a headache....”
— Learning about Life
[View All]