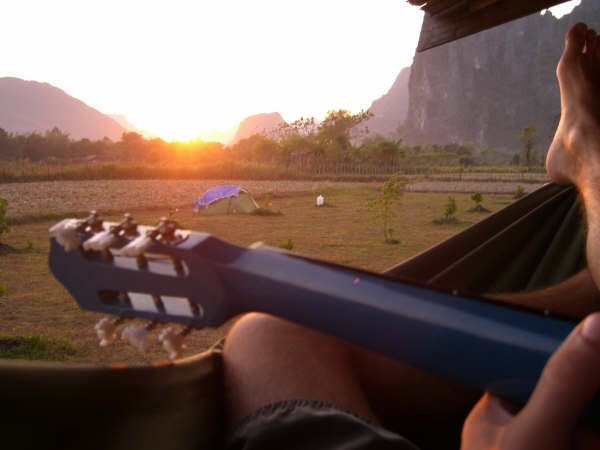 Vang Vieng. My paradise. Vang Vieng has a lot of things to do that can occupy a man’s day, including, it seems, local Laos girls who really like western boys. You can explore the caves, ride a tube down the river, party all day in the sun and in the riverside bar-shacks, and splash into the river on the giant rope swings.

Another great way to spend your day is by doing nothing and laying in the sun in the hammock of your bungalow porch, playing your guitar and smoking grass, or chilling out after eating a happy pizza (happy pizza meaning ham, pineapple and marijuana, or pepperoni and magic mushrooms if you really feel like going for a ride). It is nearly impossible to have a lousy day in sleepy Vang Vieng. If you do have a lousy day, just find the nightlife and the Asian Laos girls, whose dark brown skin can brighten anyone’s day.

I had only meant to be there a few days (which suddenly turned into two weeks) and I ended up down a side street on a dirt road in town and came upon a restaurant-pub that I had never seen before. There was a pool table inside, so I ventured in. There was a Swedish couple playing on the well-worn table and I was visiting with the gentleman when I first noticed our waitress. She was one of those very cute local Laos girls. I had been talking to the Swede for a while and I told him that I thought that the waitress was a sweetie-pie. I asked him how old he thought she was. He said, “She is one of those that you can’t tell if she is 15 or 28.” He was right on the money.

So I smiled at her. She came to talk to me a little and I found out her family owned the bar we were in and she was 20 years old. Her name was Katta, or Katja, or Kattu… I still do not know exactly what it was, but since she never bothered to correct me, I just kind of mumbled it when I said it. She complained to me that she wanted to spend the evening at Vang Vieng’s only nightclub, but her friends were not in the mood to go.

Katta, or Katja, or Kattu … whatever… and I made small talk and I beat her in a game of pool, gloated, and threw my hands in the air in victory when I sunk the 8-ball. When she again hinted at her desire to go to the nightclub, I took her cue and mentioned that I might be interested in going. I had been waiting for her to bring it up again thinking myself an idiot for missing a well presented opportunity. I had been drinking opium tea that I had bought in her bar, and finished the rest of my drink. She asked if I still wanted to go to the club, and after my assurance, we headed out. She got on her motorbike/scooter and I climbed on behind her, feeling like a huge pussy at the idea of being doubled on a motorbike by a girl.

I bought some drinks at the nightclub and she found us a table. I hate dancing more than anything, but I have recently discovered after 10 years of parting that dancing will certainly help your case if you want to kiss a girl; and I wanted to kiss this one. So, I danced like a perfect fool with no sense of rhythm. She may have been embarrassed at moments, but nonetheless, seemed thoroughly entertained. I think the opium helped my incapable dancing, but having never tried it before or since, it is debatable whether it was hormones or the drug that made me dance with no inhibitions.

We tired of the nightclub and went to my friend Addy’s bar. Addy is a local Lao in his mid 20’s and when my lady companion had her back turned, Addy gave me his full endorsement of her with two thumbs up.

Katta, or Katja, or Kattu…whatever…and I had a couple of more drinks, and although she was way too drunk to be navigating her motorbike, that was how we left the bar. I was pretty nervous of her driving and after a couple of scares I made her stop so I could drive until we could get rid of her bike at her bar. I was on opium, but I felt much more capable at driving on that than she was at driving drunk.

On our riverside walk we found some people gathered around a campfire near my bamboo bungalow, so I brought out my guitar and played and sang to the best of my ability for everyone, which was shitty as per usual. She seemed bored, so I left my slightly amused audience to walk her home and on the rickety bridge, I made my big-loser-pussy move and held her hand. She was pretty drunk so when I got her to her front door, I let go of her hand, made plans to meet her the next day at her bar, bid her a good evening, and headed back to my hut to try to sleep. The opium seemed to make me a perfect gentleman.

I was tired but excited when I went to her bar at 2pm the following day. When I said her name, her family told me she had already left. She had already left?! What? Where? “Don’t know. Left.”… I had been stood me up by the little bitch. Whatever. I was pissed off, but what can you do? Girls suck sometimes. Laos girls, western girls…all girls.

Fast forward four days, and I was walking back to my bungalow from Addy’s bar at 11:30pm, sick as a dog. It seemed to have been alcohol poisoning from too much Lao moonshine earlier in the day (which is a fantastic story in itself, involving a village of people who had never seen a Caucasian before, where there were pigs and chickens were running between my table at the party and the dance floor six meters away). People had been telling me all evening how rough I looked and that I should probably get some rest. They were right as it had been torture to be out so I started for my place to find some sleep.

I was about half way to my hut when suddenly a motorbike pulled up alongside me. There was a girl on it and I had to look twice before realizing it was Katta, Katja, Kattu…whatever… She told me she was going to ‘Smile’ bar and wanted me to come with her. However, I was in very bad shape and needed to find a toilet and my bed so I declined the invitation. She mentioned that I should come and find her the next day at her bar. I rejected her again and said, “You know where I am staying. If you want to see me you can come and find me this time. You kind of blew it when you stood me up.” She tried to pull the ole, “I was waiting for you and you were the one who did not show up” move on me. I did not feel like dealing with her. I had the shits so bad from the alcohol poisoning that I really needed a toilet as soon as possible and I needed to get to bed. Basically I was passing up ass so that I could shit. She repeated again that I should come to her the next day. I told her once more that she knew where I lived. She told me that she would not come and find me. I told her, “Oh well,” and walked away. I was afraid I was going to shit my pants.

At 2am, I was sound asleep when a knock on the door of my bamboo hut awoke me from my slumber. Another knock and I heard female broken English saying, “You remember me…?” I put on my underwear and opened the door. My condition suddenly seemed much better.

Kattu, Katja, Katta…whatever…was standing just to the side of my bungalow door when I opened it. Booty call. One of those wonderful Laos girls! Alright! I played it cool and sat with her on my porch. She smelled of whiskey. Our useless-pointless late night conversation turned into her asking, “Tonight, I sleep here with you?” Maintaining cool guy mode and not wanting to seem as excited as I was, I told her that I supposed it would be ‘okay’ if she stayed and we soon went into my bungalow. One thing led to another and I ended up sleeping with her by doing as little sleeping as possible. Lao sex! I spent the next two days hanging out with her, doing her, and touring with her by driving her motorbike with her on the back. I even bought her a pair of pants she was eyeing up. Everything has its price.

Vang Vieng was perfectly awesome aside from a terrible itching bout that kept me awake for hours of horrendous scratching from what appeared to be opium withdrawal from the one night of experimentation. Laos girls and all girls…they are ridiculous. They are the source of man’s frustration and happiness. You often need to dance with them to get anywhere, or so it seems. I fucking hate dancing. But I danced with her and the next time I met her I treated her with indifference and she still showed up at the middle of the night knocking on my door to have Lao sex with me! So, I guess the moral of the story is that you can treat girls like crap and still get laid, but you need to dance with them first!

“Usually, I think I am pretty sharp and a victor (or at least an equal against the competitors in the game of life)…but I was incapable of counting money about three minutes ago. The bartender was laughing at me.  Math is one of my strong suits.  I could not make my bills add to 30, and then when I tried to overcompensate that, I made them add to 70.  The bartender wanted to help me.  I told him, “Wow, I am blowing it.  I have been drinking beer all day.”  He said, “And you are have been doing a great job of it.””
— Day Drunk in Lesotho
[View All]