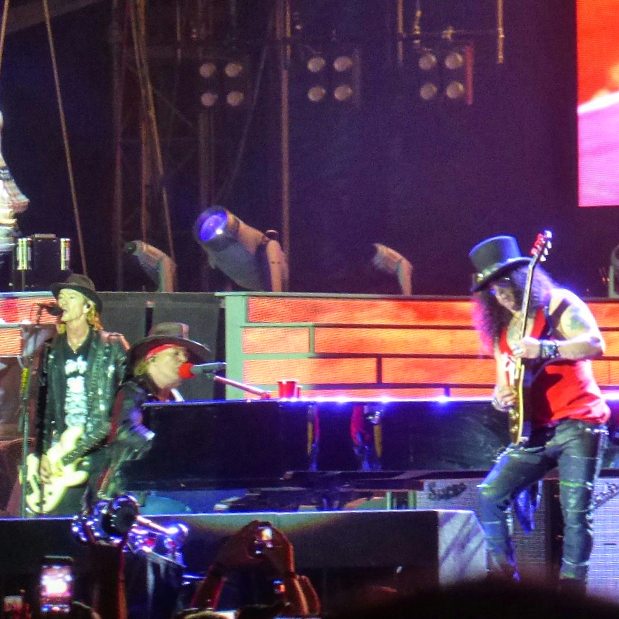 On the drive on the way there, I bought tickets on Stubhub for $145 ($183 CDN) for seats on the bottom of the Commonwealth Stadium, 36 rows from the stage.  Trevor had never been to a huge rock concert before and I could not wait to take him to such a show.  And with it being GNR, it could be one of the biggest rock shows one may ever get to see.

The Commonwealth football stadium holds 60,000 people for games.  The concert was sold out.

While Trevor and I were trying to get parked, Our Lady Peace was playing as a warm-up band for Guns ‘N Roses.  We missed the entire OLP show.  I would have liked to have seen them since tomorrow marks 20 years to the day since I first and last time I saw that band.  Maybe I will catch them two days before 40 years have passed next time. 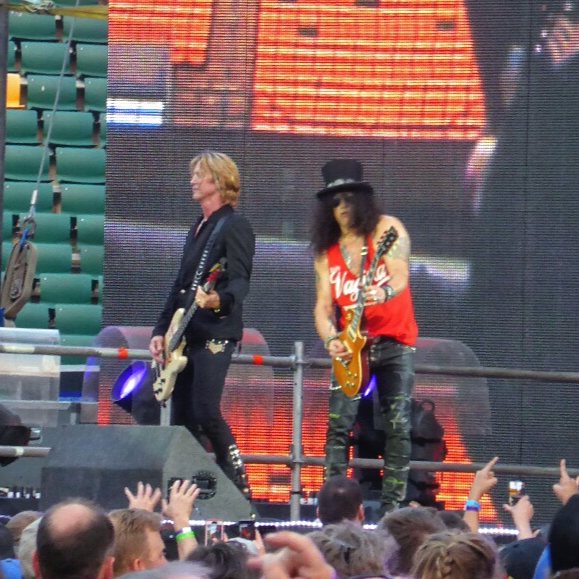 Eventually, by the time Trevor and I got into Commonwealth, it was three songs into the Guns ‘N Roses show.  Axl was actually on stage on time.  I had not been expecting that…

I guess everyone grows up in eventually!

Trevor wanted a beer once we found our awesome seats.  It is weird as I know he is underage to drink alcohol if I think about it, but I have not had to think about being around someone underage for so long that it slipped my mind.  When I went to buy us two beer I handed him his and I did not even think about the fact that he was too young to be drinking it until we left the concert hours later.  We only had those two beer at the show, but I guess I was busy thinking about how this is his 17-year-old first real rock concert and forgot about his 17-year-old drinking age…  It really did not matter much thought as I would have bought him a beer anyhow…

The Guns ‘N Roses set-list was great and it was so nice to see Axl, Slash and Duff on stage together.

The whole GNR show was fantastic and the band also did a few cover songs.  I love it when huge bands do covers!  They did Blackhole Sun, as a tribute to Chris Cornell, and my eyes began to water.  That wound is still fresh.  Even though it is three months after the death of Cornell, a person I have never met in my life, I still get watery eyes when things connect…  It is amazing how much music impacts a person.

I was surprised to see Frank Ferrar on the drums.  I was expecting Matt Sorum (Who played on the Use Your Illusion albums) to be the drummer, just based on his hair, but they have Frank Ferrar instead.  I know Frank.  I met him in 2010 at a concert in London when I had an Afterparty Pass to the Guns ‘N Roses (Nee ‘Axl’s Roses’) version of the band when Slash and Duff had been exiled.  The band at that time was still massive, but the members of the band were essentially fill-in musicians (guys with names like ‘Bumblefoot’) playing GNR songs with Axl singing.

Frank was with Axl at that time in London.  At the concert after-party, Frank said we were all going to hang out together and then he ditched me (understandably) for the hottest Swedish groupie you could imagine.  He had been with the groupie in Stockholm for the show previous to the one in London and the groupie had flown in from Stockholm to see him again.  I would have ditched me too for her…

That was the last time I saw Frank.  It was the back of him as he was forgetting who in the heck I was and walking away with the beautiful groupie as security would not allow me through the hallway where the ‘Haves’ were going…

The Guns ‘N Roses show was one of those concerts where I sang as many words as the singer because nearly the only words Axl said that I did not know were the brief moments when he talked to the crowd.  Slash and I had a few dueling guitar solos…the only difference between our work was that my solos were air and silent.  I have likely air-guitared those solos about half as many times as Slash has probably played them.

I know where to bend those air-notes!

This is kind of how Slashs guitar solos looked in my mind. I was kind the guy on the right though I have fewer tattoos and a better nose.

Apart from Slash’s solos melting my and Trevor’s minds, another of the highlights was the Guns ‘N Roses cover version of The Who’s ‘The Seeker’.  Axl sang the song in his real Axl speaking voice, with no falsetto.  I had never known him do that before, and it was actually really cool to hear him sing in such a way…

All in all, the show as great. 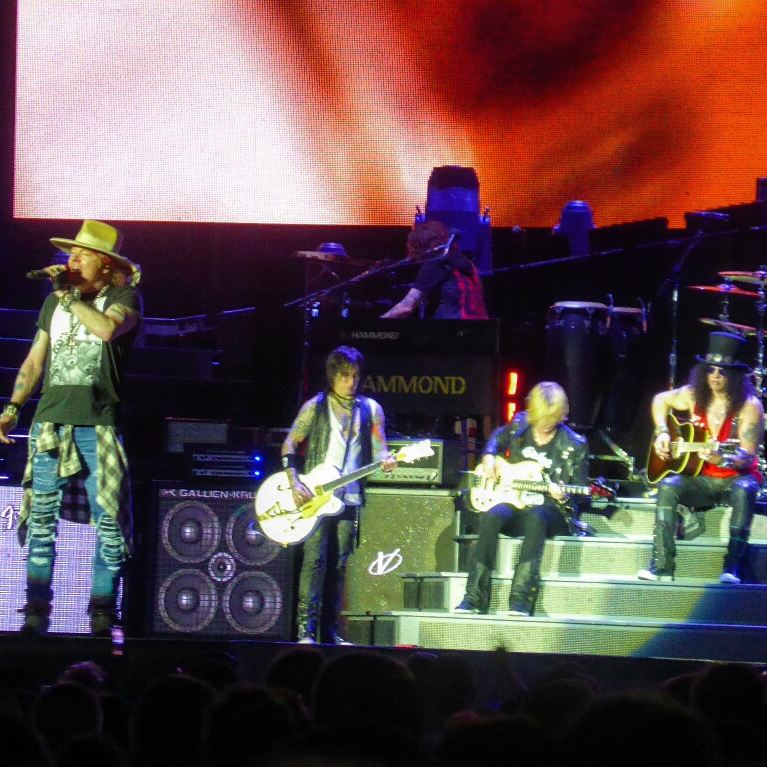 Axl, Some Guy, Duff, and Slash.

The band sounded so good, with their core together for this tour for the first time in about 20 years.  And to see my 17-year-old cousin at the show, smiling and being blown away…money well spent!

Thanks to Axl, Slash and Duff, for kicking a ton of ass and getting over the bitch-fight.

Yea, so we saw this on the road home in the morning. Chyaaa….Cool! 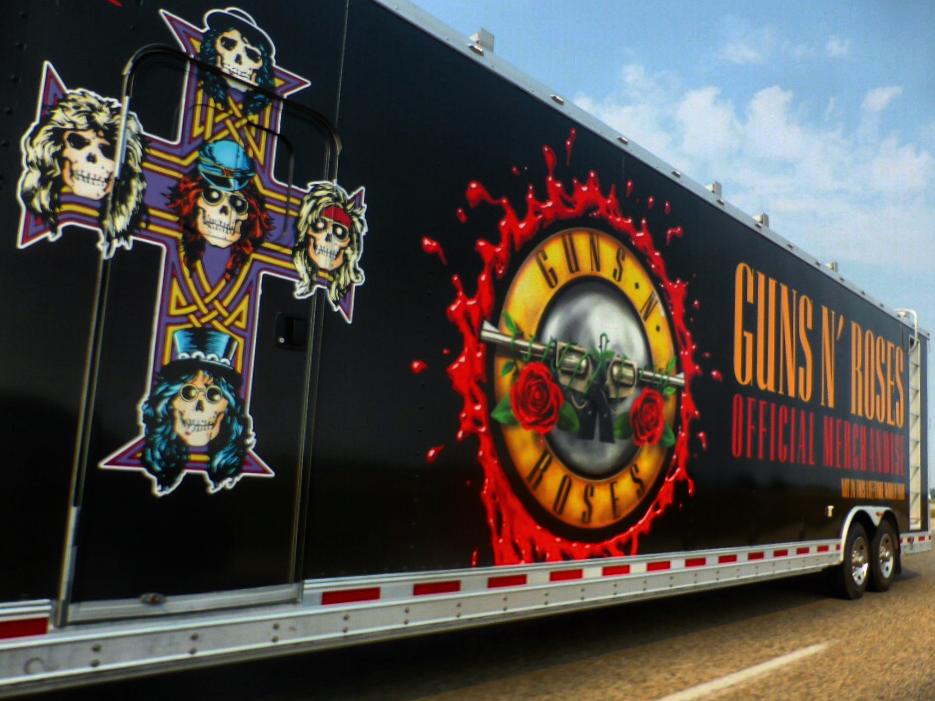 The Guns ‘N Roses merchandise truck on its way to Vancouver!
We gave the heavy-set lady-driver sucking on a cigarette two very enthusiastic ‘thumbs-up’s!…