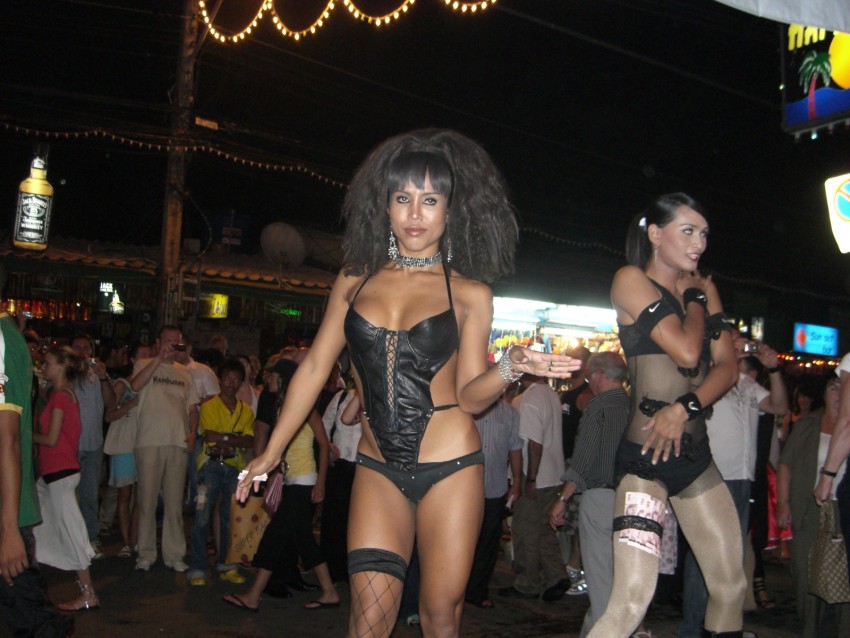 It was early August and my German girlfriend and I had just left Australia on a cheap flight to squeaky clean Singapore. After a couple of days of sightseeing and eating, I stumbled across $98 tickets to fly into Bangkok. Bangkok is always an interesting city of naughtiness. I had once previously encountered the wonders of a sex show in Thailand and I asked my girlfriend if she was interested in seeing one. When she told me she was, I booked our flights and we flew out the next day. 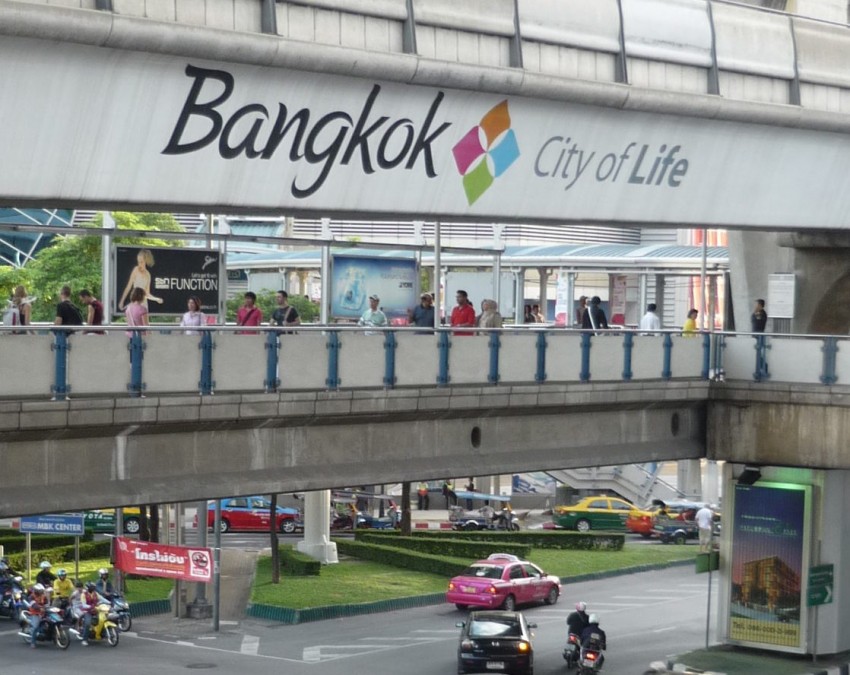 That should say, ‘Bangkok – City of Crazy!’

We were hanging out on Khoa San Road in Bangkok, Thailand when a dirty tuk-tuk taxi driver approached us about attending a ping-pong show. Bingo. We jumped into his tuk-tuk, a three-wheeled motorbike with a covered bench seat on the back, and headed to a shady area of Bangkok. He took us to the front door of a building and muttered something in Thai to the host coming out of the place to meet us when we arrived. I am sure whatever he told the host in Thai was something along the lines of, ‘Charge them as much as you can’ because when we got to the door the price was suddenly 800 Baht/person instead of the 500 Baht we were told the price would be (30 Baht to $1). 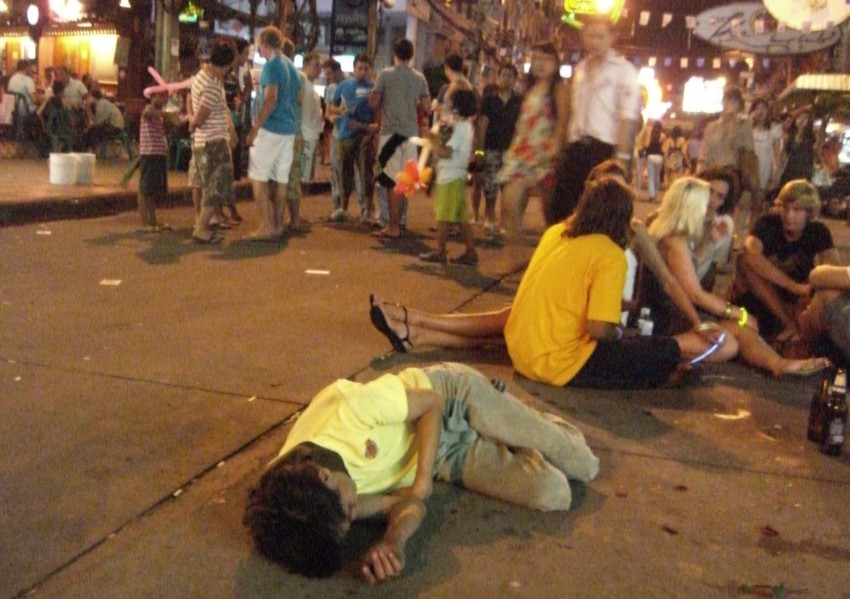 I argued with the host and the bouncer and threatened to leave, although I had no intentions of going anywhere except inside with my girlfriend to see the sex show.

He did not call my bluff and told me that we would not get a free drink when we went in at 500 Baht each. I argued again and told him that I knew the free drink came with the entrance fee. He buckled to my firm negotiating, unbelievably, and we entered a curtained doorway into a very dark bar room. Once our eyes adjusted to the darkness, I got us two whiskey and cokes from the bar and we headed to the center of the room where a small stage sat in the middle of it with old theatre seats placed around the stage in three or four rows. The whiskey was so watery that I am sure the coke had to have been watered down too.

Pervert row was where I took us to watch the show and it began on a stage that was about 3m by 3m and no more than 1m from where we were sitting in our seats . Many black-lights come down from the ceiling to make everything glow.

Well, things were off and running in no time flat. The show began with a girl who had three ribbons in her vagina that glowed in the black light; green, orange and white. She wrapped the ends around one of the three stage poles and walked around dancing and circling the poles until she had exhausted all of the ribbon from her vagina. There was probably about 15m of each color.

The next girl who came out had a string in her vagina and started pulling on it and plastic flower after plastic flower came out of her that also glowed in the black light. There must have been about 10m of string and plastic flowers inside of her. Then a girl came out with a bottle of Pepsi in one of those old-fashioned 300ml glass bottles with the pop off metal lids, no twist offs. She had the man next to me hold the base of the bottle. She straddled it, squeezed it with what appeared to be her vagina, and ‘poof’, it shot off and sounded like a champagne bottle, foam and everything. Then she demanded a tip from the man she had asked to hold the base of the bottle. I thought he had been doing her a favor, but that is just how Thailand is sometimes.


Next of the sex show was a girl who came out with a newspaper and danced around for a while. Then she reached into her vagina and pulled out a string that had about 20 razor blades weaved through it’s length. No blood, no cuts, nothing. Then she used each razor blade and sliced about 20 slits in the newspaper to show that they were legit. I was convinced.

Next, a girl who came out with a Pepsi bottle full of clear water and Pepsi bottle that was empty. She laid on her back, pushed the drinking end of the full Pepsi bottle into herself, and her vagina guzzled half of the bottle of clear water. She danced around a little, grabbed the empty bottle she had brought with her, put the small drinking end into herself, and then peed out a dark substance that looked exactly like Pepsi. Either she had food coloring inside of herself from the moment she walked out or else she had a magical vagina. Either way it was pretty impressive and probably not very healthy.

Then, a girl came out with a birthday cake and a hollow tube. She lit the 10 candles or so on the cake and on command she could pussy fart well enough that she could shoot her farts through the hollow tube and could blow out the candles on the cake with her pussy fart two at time. Well, I was beside myself with delight at suck fine work. Then she did the old ‘whistle in the vagina’ trick where she put the whistle in her vagina and could blow it with her pussy farts. “Fweet Fweet Fweet.” Awesome.

Next we had a girl who shot ping-pong balls into a cup but was not very good at her trade. The stage was hard and when she missed the cup the balls would bounce in all directions. One of the balls came out of her vagina, bounced on the stage, bounced off the stage, and then bounced off the top of my wrist. Very very uncool. Maybe it was the hypochondriac in me, but I swear I felt a burning sensation for the next 20 minutes on the spot where the ping-pong ball hit my wrist. I had to lie to my girlfriend and tell her that the ball missed me just so that I could avoid the iron bush scrub that I am sure she would have put me through.

On stage next was a woman who had a thick blue marker and a blank piece of paper. She danced a bit, then slid the marker in herself and squatted over the paper and held the paper firmly in place on the stage and only moved her hips around. After about 90 seconds of hip and ass swaggering, she held up the piece of paper for the audience to see. At the bottom of the paper were the words, ‘Welcome to Thailand’ with very nice penmanship, but the most impressive part was that she also drew a portrait of a man’s face above the words that was really detailed to include even glasses. I was so moved by her artistic ability that I tipped her 100 Baht (about $3.33) to have the portrait for myself to mail to a friend at home for the wall of his garage where I think it will be a dynamite conversation piece.

Next were a couple of lesbians who came out and fooled around a little on the stage but their effort was pretty weak at best. But then, the grand finale came out…a bikini clad Thai woman in her late 30’s and Thai man in his mid-40’s who was wearing Homer Simpson style white underwear. My sweet and innocent girlfriend looked at me in disbelief as she wondered if she was really going to see what she thought was to come.  I just nodded my head at her, smiling about what I was sure was to come.

The couple on the stage were about 1.5m or 2m from my girlfriend and I in our seats. They started to kiss. He removed her clothes. He laid her on the stage and went down on her for a while. She took off his underwear and went down on him. Then he climbed on her and fucked her right there in front of us. I could nearly touch them they were so close as he put her in every position imaginable. I looked at my girlfriend and her mouth was hanging open, she was so blown away by what her eyes were watching. It was totally, ridiculously, outrageous. He finished up, got up, and stepped off the stage with her following closely behind, both naked, and the bar turned on the lights. We left and people were coming in the building to watch the next show take place again. Repeat performances.  Unbelievable. Bangkok, Thailand…totally unbelievable. 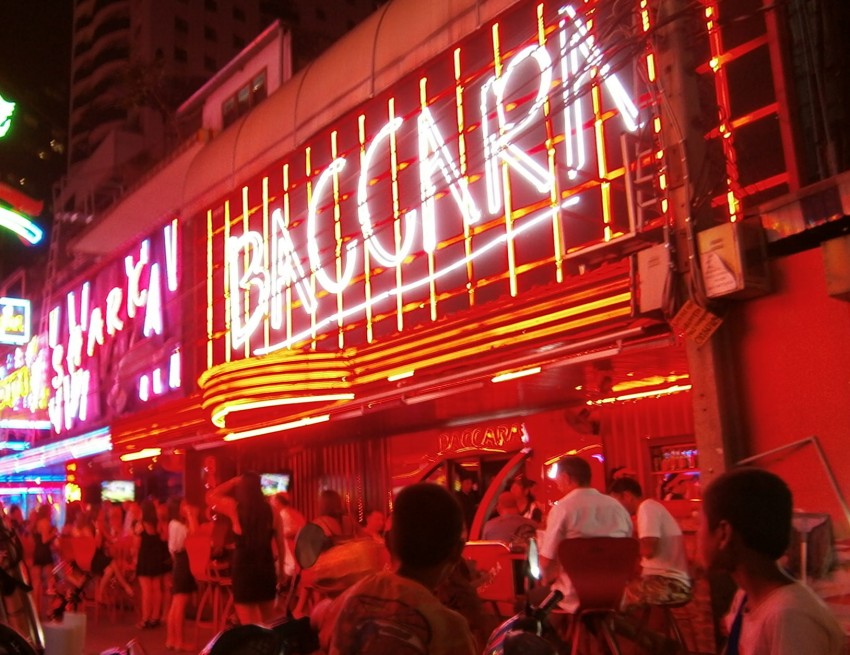 We left there and went to the Sio Cowboy (Cowboy Street), the Go-Go district of Bangkok that is also out of this world crazy. We entered a bar called ‘Baccara’ and there were 15-20 girls in bikini tops, short skirts with no underwear and high heels, dancing on a square stage in the middle of the bar. All the girls were wearing numbers buttoned to their bikini tops in this plush, fancy bar. Above the dance floor on the second floor were another 10-15 Thai girls dancing on a see-through glass floor directly above our heads, wearing schoolgirl uniforms and no underwear. They were also wearing buttons with numbers on their uniforms so that all you had to do was look up, pick you number, and pay for your own personal indulgence. 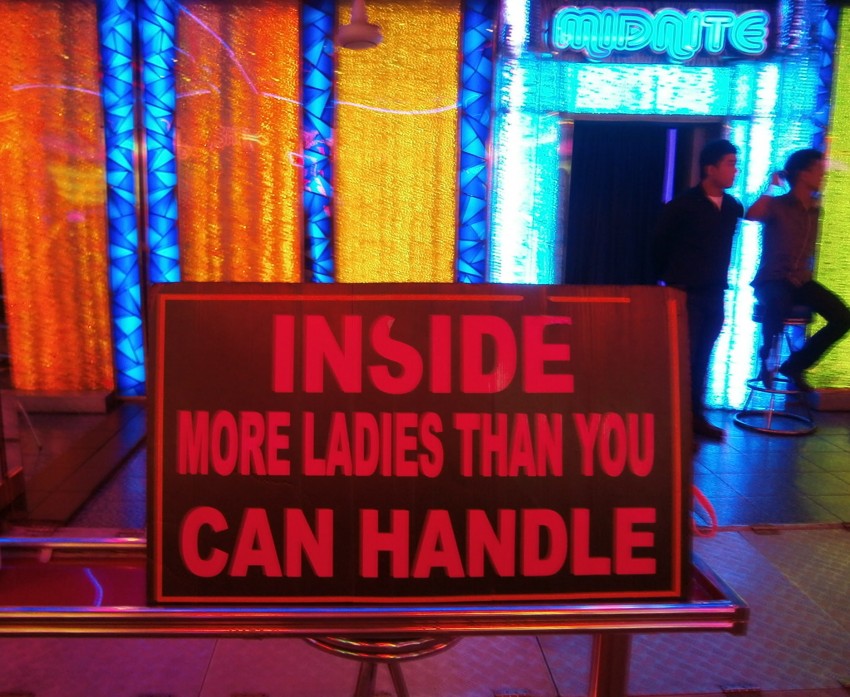 This is not a dirty place; this is a plush, red velvet walled palace. Everyone was very cool to us in there, everyone was friendly, and the go-go girls sure liked my girlfriend. I smiled at them, but they were busy smiling at her. We left after about an hour and got into a taxi to go home.

A police check stopped our taxi to assess us white tourists. The cop asked me where I came from so he could have a short conversation with me to make sure I was not messed up on drugs, and when he realized I was coherent, he sent us on our way home. Our cabbie told us the cop checked our car to make sure us tourists were not in Thailand to get mixed up in heroin, coke and meth. Bangkok is a crazy place. A city of sins.

Do you want more like this?
Try my other story: Death Threat Thai Sex
https://www.bigbeaverdiaries.com/koh-samui-death-threat-thailand-sex-diary/

“me - "I am off to a bon voyage gathering for a drink, but only one or maybe two." her - "Can you really stick to one/two? You look too cheeky to be sensible."”
— Samantha from London
[View All]