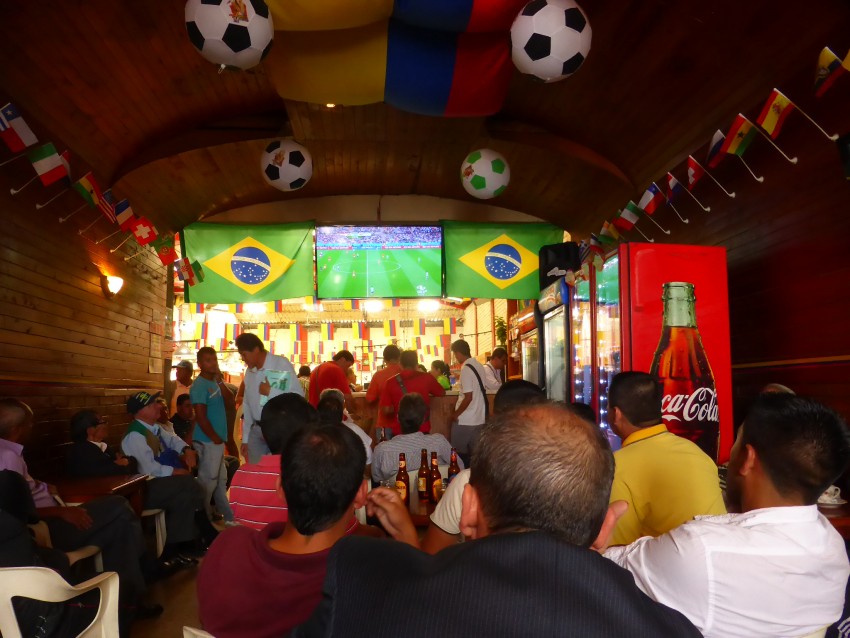 People love my wooden sunglasses.  I get a compliment on them nearly every day by someone.  When people ask me, “What are they made from?” my standard response is, “I think a small Chinese child’s hands…”  The reality is that it is probably entirely honest and that is pretty sad…

My dates with Lucia include me carrying a Spanish/English dictionary like it is my man-purse.  It is necessary for communication with her and vocabulary.  My Spanish is escalating like a rocket by being in a fling with someone who does not speak a word of English.  And this is necessary because on the night I met her I wanted to talk to her friend in Spanish about her crazy hair and I called her a crazy dog instead.

I finally thought the situation through and changed hostels this morning so that I could have a private room.  Sometimes I wonder why my brain does not think of these things earlier.  I moved to the Or for C$30,000 pesos/one person and C$32,000/two people.  I told them there would be two people staying and pay about an extra dollar a day to not have to answer questions for my female visitor.  Lucia and I went to watch the Holland lose to Argentina in the semi-final World Cup game where I think I was sadder than the Dutch people who were watching the game with us and then Lucia and then we came back to my hostel, four beer deep.  It the first time we had been alone in private.  Well that was awesome. I took her clothes off, which was a pretty freaking exciting moment in my life!  That Colombian snack!  Finally, I got to sleep with her.  It is pretty awesome when a woman can not communicate with you well and during sex she suddenly utters an “…Orgamo!” to you and refers to you as “Delicioso!”  Yea!  Mega Awesome!  I have wanted that woman very much for five days and I have shut everyone else in the city out of my life for her.  That beautiful woman with that killer little 152 cm body and those huge boobs on that frame…

Wow.  Life is a treat, and that treat today the most delicious Colombian snack.  I have nicknamed her ‘Petardo’ which means firecracker in Spanish.  Thanks for helping acquire that Charm and Gringoness.

Lucia and I went for dinner at about 10pm.  We were in a chicken restaurant and the girl asked me what I guessed was Spanish for, “What part of the chicken would you like?”  I lifted my leg above the table and showed her my thigh.  A drumstick arrived shortly thereafter from a very grinny waitress.  Lucia caught a taxi home and I went back to the hostel for the night.