Ayahuasca and Mental Inception – Rio de Janeiro Forest – March 15 – 2014
We were up early to meet a group of three other gringos at Central station at 10am.  We were early.  We were tired.  We caught an air conditioned seat reclining nearly empty bus to somewhere outside of Rio de Janeiro, Brazil.  I was not in charge so I had no idea where we were going and I did not really care.  I just knew that the road was taking me to a place I have never been to in my consciousness. 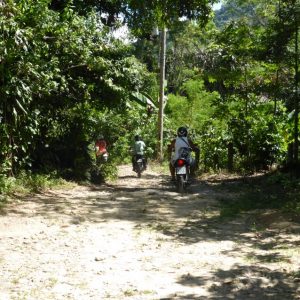 After lunch in a sketchy town outside of Rio in which I was told to not eat red meat to hopefully avoid probably future vomiting, us five gringos negotiated $14 Brazilian Real ($4.60 US) per person motorcycle taxi to take us very far out of the town and down a rocky dirt road into the forest.  We had grocery bags of fruits and vegetables and I was carrying a tent to get through the next 30 hours.  After the bikes took us as far as they could, we walked up a path through the forest in the heat of the day for about 15 minutes and then took a break on the side of the path.  This is where my group introduced me to rapé.  Wait, that looks weird.  It is rapé, with an accent, and not just rape with something like a French accent.  It is a different word completely.  This was a weird journey, but not rapé weird.  Rapé is pronounced ‘Ha-Pae,’ just so there is no confusion.

Anyhow, rapé is just like sniff snuff.  It was widespread in Brazil until the early 20th century, but it is a big part of the ayahuasca/Santo Daime scene.  The indigenous peoples of Brazil are thought to have been the first to use ground tobacco as snuff.  They use an ‘V’-shaped applicator in which one end is loaded with the snuff.  That end is placed against a nostril and someone blows on the other end to shoot the snuff into your nose.  It seems that once you become handy at this practice, you can fill the applicator yourself and then blow on one end with your lips to shoot the tobacco up your own nostrils.  It was an intense rush, and I was told that they like to use it because it opens up paths within you and gives a sense of clarity.  I would say it clears your sinuses.  It is a crazy surge no matter how you view what happens.  It made me dizzy, my legs shook, and my eyes got very watery.  I was told to ask for something when I took it. I asked for a positive experience.  I am not sure if rapé is for me, but the rest of my crew really seem to enjoy rapé. 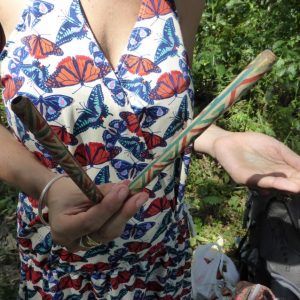 How to shoot rapé into our nose.
Rio de Janeiro, Brazil.

I took my belt off and put it in my backpack as we moved on.  It did not seem like I was heading to a place to appropriately wear a ‘Bad Mother Fucker’ belt buckle, even after trying rapé for the first time.  Then, at the end of the path, which was about another 30 minutes of walking through the forest, we passed a waterfall just before reaching the church.  This was not a the church that just flashed though your mind with ‘big doors and a steeple.’  It was more like a building with a roof and walls, and in the center of the room was a pole with depictions of a cross on it.  A gringo couple I was with had brought a painting of Jesus and a painting of Mary.  The one carrying the painting of Jesus showed it to me on the way.  He said, “Check it out.  It has Jesus shooting lasers.  Pretty cool hey?”  I had never seen anything like it.  I asked this friend how he had found ayahuasca/Santo Daime.  He told me he had found it through someone he was with in narcotics anonymous in the United States.  He said he met a spiritual native Indian there who directed him on this path.

Everyone in my group told me that they liked my spirit immediately and they told me that I will likely have a great experience.  They asked me what I am looking for.  I told them, “I want to see my inner spirit.”  One of the veteran girls told me that is one of the best answers she has heard.

So, we headed to a rock just away from the church where we sat and sang hymns in Portuguese.  They chose a rock to sit on the get in touch with nature.  I was told that the hymns are channeled from spirits to people who translate them into words and write them down.  After singing for a stint, we headed towards the waterfall for a swim to feel alive and to feel fresh from the heat of the day.  Then we came back to the church to change clothes.  I wore jeans and a rock and roll cowboy shirt.  Everyone else was wearing matching white long sleeve dress-shirts and ties, men in slacks and women in long shirts.  A woman had a hula hoop and we were having a go at it outside of the church, but we were told to stop.  Having fun was not good for the future of mental conditioning.  That seemed very churchy.  Some locals came.  There where children there.  I later remembered to count the people in the haze that would follow. 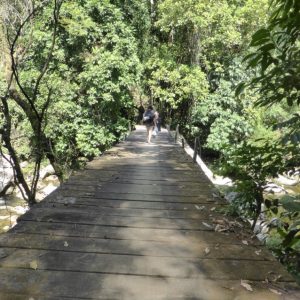 Bridge of the mind on the path of crazy mental depths!

We were segregated in a circle around the pole in the middle of the church, and there was a sort of line drawn on the floor to keep the women and their energy on one side and the men and theirs on the other.  The lights were on in the room and a smokey scent filled the air.  There was a little Jesus to be taken in.  Candles were lit.  The Santo Daime drink was poured into a small glass.  Santo Daime/Ayahuasca is the result of taking the leaf from one plant and the vine from a different plant and boiling them together seven times.  A three year old was given a small amount of ayahuasca while music and singing in Portuguese filled the air.  Eventually, I was called up to the pole where the leader handed me the glass everyone had been using.  It was a brown liquid, and there was about 125 ml in the glass.  It had a bitter taste and I drank it down in one swallow.  That was at 19:45 and I stopped keeping track of time.

After a short while passed and singing took place, my arms began to feel very heavy.  It was dark except for the candle light and we all focused our energy on the pole in the middle of the church.  I was told to not cross my arms or legs as I sat in my plastic chair, to keep the energy flowing as we were all as one.  There were 14 of us when I counted, in the candle light with the crickets chirping around us.

These are the scribbles from my notepad, as my mind went to crazy places… 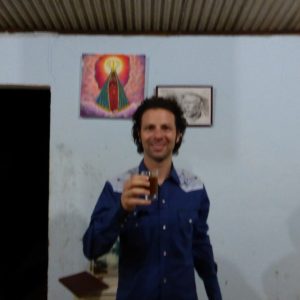 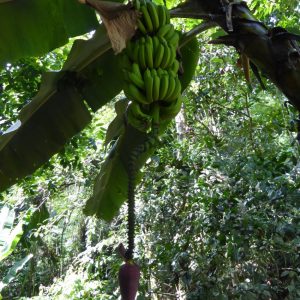 Banana Tree on the grounds. 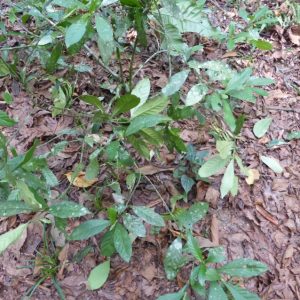 Dimethyltryptamine or Justicia pectoralis. One contains DMT and the other does not. These leaves are then mixed with the vine and boiled together. 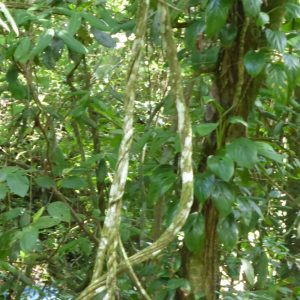 Banisteriopsis caapi vine, This chopped up and mixed with the leaves, and then they are boiled together. 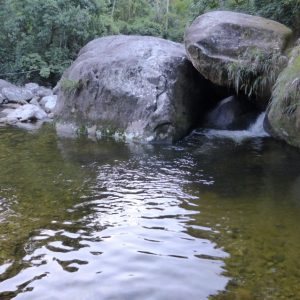 Small waterfall near the church. 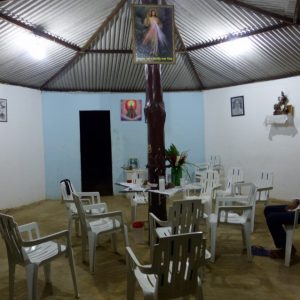 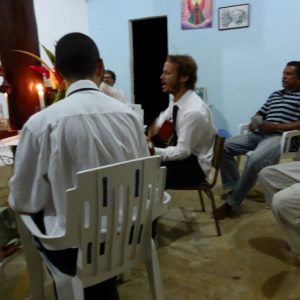 He told me that the Daime channels through his body and teaches him how to play the guitar. 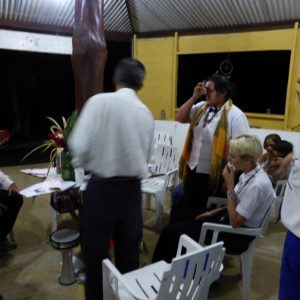 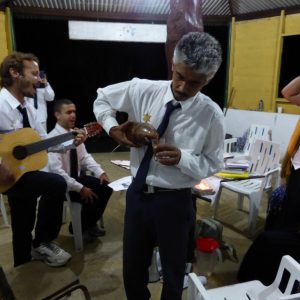 The group leader, pouring the Daime 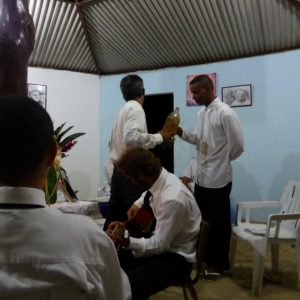 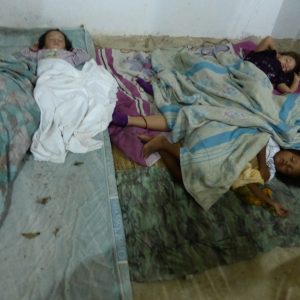 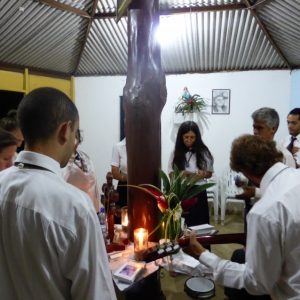 Celebrating with Hymns and Chants. 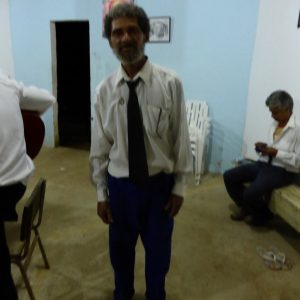 He was my favorite looking character of the entire journey. 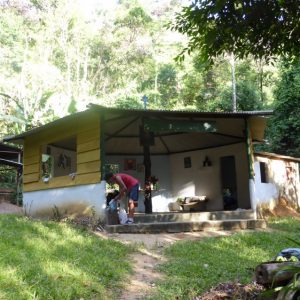 The church from a distance. 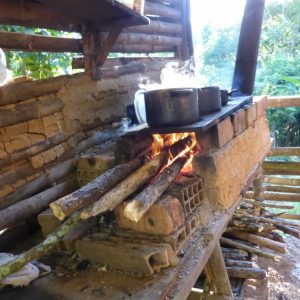 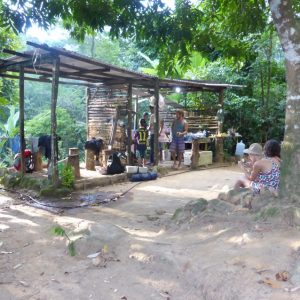 “A police check was set up on the road and my driver told me to put on my seat-belt.  Africa is funny.  Ahead of us was a pick-up truck, for a driving school of all things, and there were at least seven people in the back.  As long as the people in the cab are wearing their seat-belts, it is no problem…”
— Life in Lesotho
[View All]