Pablo Escobar Tour – 22 July 2014,
The tour bus picked me up from my hostel.  I was on the afternoon Pablo Escobar Tour because the morning tour was full, but there were only three of us this morning.  That would allow me a lot of room to ask a lot of questions!  I am a tour guide’s dream for a while.  But then he tires of having to answer so many questions, many of which he has never had to think about before.  The cost was C$65,000.

Pablo Escobar exported over $3 billion worth of cocaine into the U.S. and Europe with his empire.  There were times when he was making $50 million each day.  He was the king of kings during the reign. 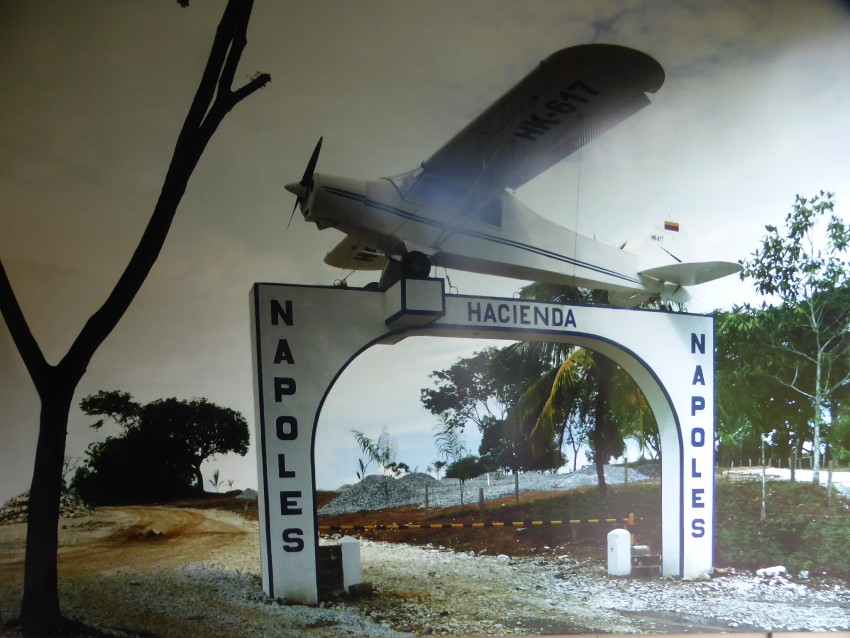 The first plane Pablo Escobar used to move is cocaine. It sits on top of the gate of what was one his greatest ranch.

Escobar grew up with nothing and his family did not always have enough money to feed the entire family of seven children.  He created a cocaine empire that began by transporting cocaine into Colombia from Bolivia and Peru in the days before he made huge farms and labs to create the product himself.  During his height, he had many farms and a zoo with animals for his kids (there is still a growing herd of hippopotamuses wild in Colombia, the largest hippo herd in the world not in Africa with no natural predators to control them).  He had houses all over the Colombia and had built 18 artificial lakes within the country on his farms.  When a massive slum in Medellin was torched, Escobar and a friend drove to slum to see people who were living in garbage misery.  He built houses for all of the 700 families.

As a result, Escobar was seen as a messiah among many of the poor in Colombia.  He built football fields and took care of the poor.  He offered to pay off the government of Colombia’s $700 million debt.  In 1984 he ran for congress and was elected based on the vote of those in poverty.  That would be his downfall.  Escobar had climbed too high and the government opposition decided to expose him for who he was; the kingpin of cocaine and not the real estate agent that he had claimed to be.  He was thrown out of congress.  His fame was too large.  The man who exposed him was murdered.  The government of Colombia realized how dangerous the drug cartel was.  America wanted him extradited, and he battled the government to change the law.  Escobar created a civil war within the country because of the extradition law.  He said, “Rather a grave in Colombia than a jail in the U.S.”

Pablo Escobar was once voted the seventh richest man in the world by Forbes magazine.

Escobar and other drug cartels from different parts of the countries owned football teams which were their toys.  The put millions of dollars into the teams and Colombia rose to the top of football from out of nowhere in the late 1980’s.  He would pick his own teams, some of the players foreign, and another drug kingpin football owner would pick his own team and they would all fly to one of Pablo’s farms where they would have a match with friendly bets of $2 million dollars between the kingpins.

One of Escobar’s office builds was bombed in 1993 that has been confiscated in 1992 by the Colombian government.  For 20 years the building has remained empty and bombed out until eight months ago when a Chilean company bought it and they are restoring it to create a hotel.  No one wanted any connection with the building before now.

The cartel has killed over 540 police officers and injured 1000’s.  When Escobar was being hunted he gave $1000 to the gunner of any policeman killed.  I asked the tour guide, Daniel, how he felt about Escobar.  He told me he is objective about him, but that his family hates Escobar.  Daniel told me that one of his aunts was forced to watch the cartel torture and murder her husband and two of their children.  He said that almost everyone in the country is connected to a story similar to that in some way.

Escobar was being hunted, but he would out-bribe anyone who was after him.  He escaped his hunters for years because whoever was organizing a raid to catch him would call him to warn him, “Pablo, I have organized a raid, with two helicopters and 50 men.  We will be there in 10 minutes,” during which time Pablo would escape.  On one of the farms he had a swimming pool that rose from the ground and there was another house underneath of it.  No one would ever suspect such a place existed.

In 1991-1992 Escobar decided to give himself up.  But rather than go into a Colombian prison, he built his own prison because he did not trust the government.  He built a place called the ‘Cathedral’ that was a five-star mansion jail complete with two chefs and a football pitch.  He brought his two football teams to the Cathedral to play football with him.  It was rumoured the Escobar was out and occasionally in clubs rather than in prison and the Colombian government decided to put a stop to everything.  Escobar escaped from his ‘prison’ and spent the next 18 months in hiding.

We were taken to the house where Escobar had spent his last days.  Escobar was there with a couple of friends, one of who was his bodyguard.  His bodyguard was a very superstitious man and at the table one day a fly came into the room, flew a circle around Pablo’s head and then flew away.  The bodyguard felt that something was wrong.  Moments later Escobar dropped his cup with wine in it, but when the glass fell to the ground it did not shatter and did not spill the wine.  It was too much for the superstitious bodyguard who wanted them to move immediately.  They moved to a house close to the football stadium after where Escobar would be killed days later on December 2, 1993.  No one knew of the house they had been staying in before.

In 2008 there were many rumors swirling that Escobar was still alive with plastic surgery.  There were rumors that he had actually killed himself.  So, 15 year after his death, the body was unearthed to prove that it was Escobar and it was discovered that he had killed himself, rather than the story about the sniper who had shot him.  Escobar had always said to everyone working with him that if it came down to it, killing yourself was better than torture and body mutilation to death.

There are very mixed feelings about Escobar in this country.  Many of the poor still love him.  Daniel has said that he has also seen people urinating on Escobar’s grave.  There are millions of dollars buried somewhere in this country.  Only Pablo and one other man knew where much of the money was buried and the other man was killed in a raid.  There are many stories of bags of $10-15 million bags of money being dug up. 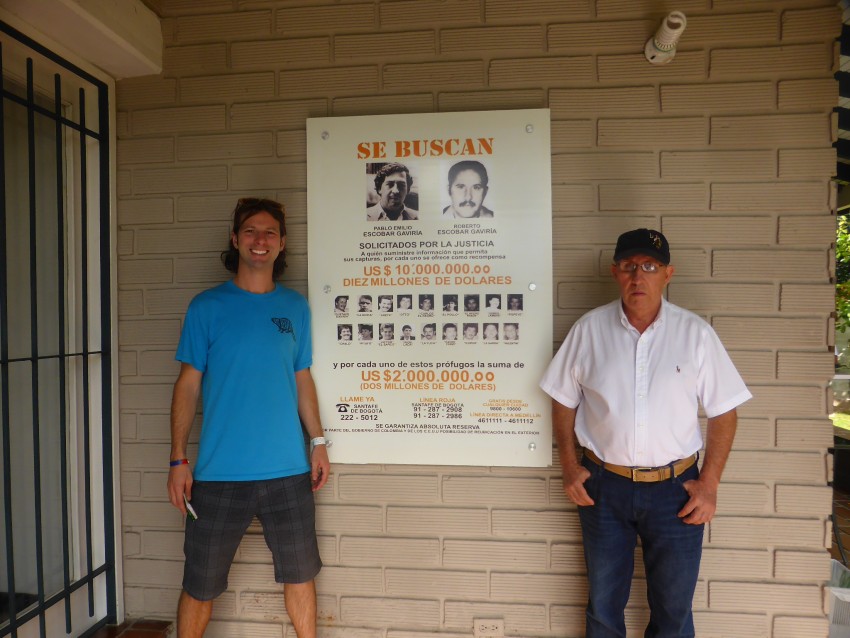 I met Pablo’s older brother, Roberto Escobar, at the ‘final days’ house.  Roberto was bicycle champion who stayed out of Pablo’s trouble as much as he could.  He actually runs the Pablo Escobar Tour.  He was imprisoned for 14 years for helping his brother and withholding information from authorities.  Fifteen days after Pablo’s death, Roberto received a letter bomb and he now has a fake eye, very little hearing, and no ability to taste.  It was very interesting to meet the man.  Three years ago six men nearly killed him when they broke into the yard and shot up the house in search of some of Pablo’s money.  There are many bullet holes in the walls from that night and two of the men were murdered in a shootout with the police.  The saga never seems to end if you are connected to the kingpin drug-lord in the history of time. 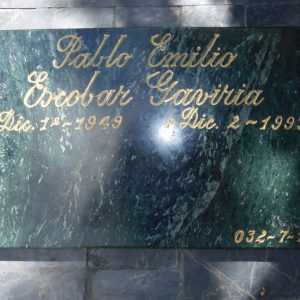 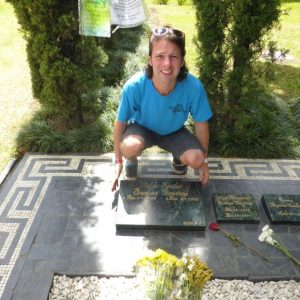 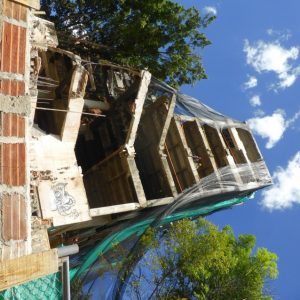 An office the Pablo Escobar used. Bombed in 1993. 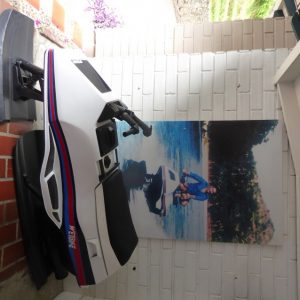 Pablo Escobar on a jet ski. 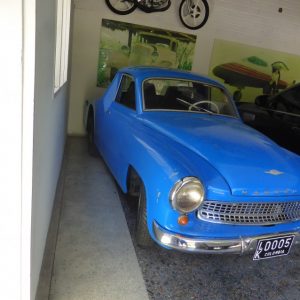 A typical car originally used to move cocaine from Peru and Bolivia during the beginning of the drug kingpin’s career. 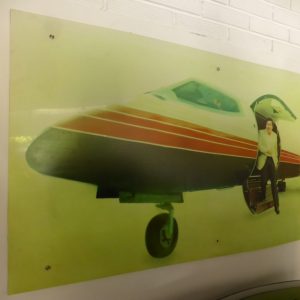 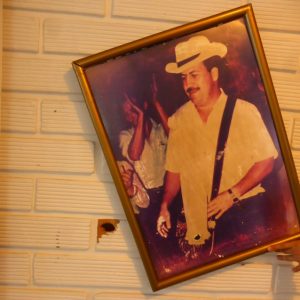 Three years ago a shootout happened in Pablo’s last days house. Here a bullet went though the painting and the wall behind. 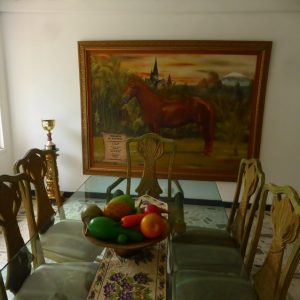 The table where the fly and and the chair at the end where Pablo Escobar sat the day the fly of a bad omen circled his head. 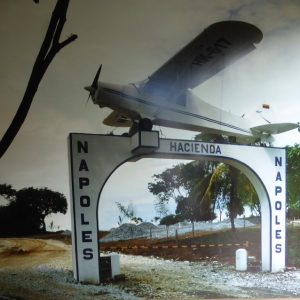 The first plane Pablo Escobar used to move is cocaine. It sits on top of the gate of what was one his greatest ranch. 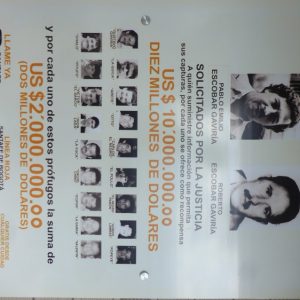 Wanted poster for the Escobar’s. 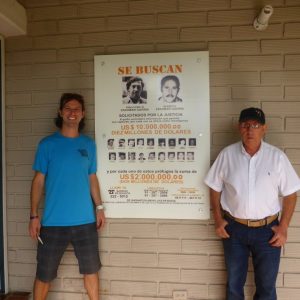 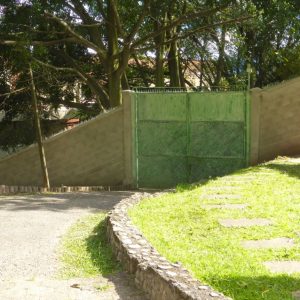 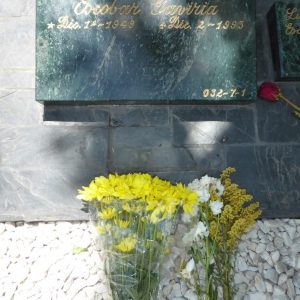 “Christian told me that when he lived in southern Africa about 10 years ago there were Europeans who came in to educate the locals about safe sex.  They were teaching the people how to use condoms and for an example they used a broomstick that they rolled the condom down to demonstrate usage.  Later, when the Europeans returned after some weeks and visited people’s houses, all of the houses had a broomstick with a condom rolled down it.  Apparently there was some misinterpretation between education and witchcraft…”
— Education Vs Witchcraft
[View All]