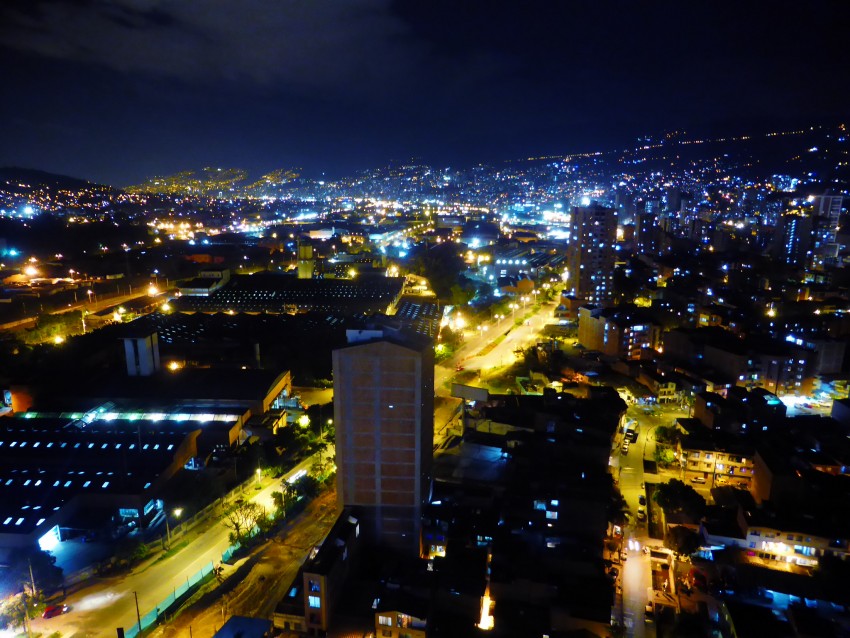 Medellin, Colombia at night from 27 stories.

July 21.
Bogota to Medellin.
Beer is the same price as water in Colombia.  Surely that and the hot weather is one contributing factor to why it is a third world country.  It is always warm enough so that if you do not work to make enough money to cover your rent, you will not freeze to death.  With no pressing need to make sure you survive the winter, you might as well drink beer instead.

I decided to pull the plug on Bogota.  It is cold and does not offer enough sunshine.  I mean, it is not ‘real’ cold, but when you are in Colombia the hot sun is the draw, and that beats wearing a sweater with phone thieves on a bus.

I got up at 5am to head to the bus station for a Bogota to Medellin trip.  On the way a manhole cover was missing on a street and I wonder how much damage that causes cars of unsuspecting drivers who are not paying attention.

I bought a sketchy ticket at the bus station for Medellin for C$50,000.  The ticket said C$65,000 on it and she said the bus would leave at 8am.  She asked for my name, wrote it on the ticket and sent me away.  I found it peculiar that she did not ask for my passport as everyone else does when buying bus tickets…  I had a hour to kill.

At 8am, I was told by a different woman that my bus was not coming.  It would not come until 9:30am.  Of course…  I asked for my money back and a different woman handed me C$55,000.  I feel like I have been cheated so much in Colombia that I pocketed it.  I have been really screwed by three different taxis.  A doorman tried to steal my camera.  My sweater is missing.  Someone stole my phone….  I have had zero trouble in South America before this country and I have been extremely honest with people.  A few days ago I paid for a $20,000 bus when the driver forgot to charge me.  I have given back excess change several times to vendors and other backpackers have looked at me with a ‘Wow that was honest of you’ face.  But, I changed today.  I will cheat Colombia when I can from now on.  I kept the extra C$5,000 from the bus ticket for my troubles and when I left the hostel this morning they had no record of me on file.  I had a bed for three days and had only slept in it for one and a half nights.  I told them I was only there for two nights instead of the three nigth I really owed them.  My information I gave them was accurate but not quite honest.  They would cheat me if they could.  It is time for me to stop being so fucking nice.

I got on a bus from a different company at 9:20am for C$55,000.  I sat in the very front and fell asleep not long after we left until a man in a freshly pressed green dress shirt and dress pants stood at the front of the bus with a microphone and a speaker attached to his belt.  He had slicked back black hair, sunglasses, and could not have looked more sleezy.  As we drove down the road he spent the next 45 minutes to an hour yelling his spiel into the microphone, trying to sell some kind of herbal pills.  I wanted to murder him and I said so aloud.  That speaker was right in my ear.  After his rant that took us through at least two other towns of distance he tried to hand everyone a jar of pills.  I told him to fuck off when he tried to hand one to me.  Fucking asshole…

We were on a decent bus, but the front door was held closed by a seat-belt strap wound around the window frame.  In the middle of the country our bus was stopped for a police check and everyone’s identification was collected from the bus.  They went through my passport and wanted to look in my small bag.  I was expecting the worst, but they sent us on our way after about 30 minutes.  I had been sure money would come into play…

The country is gorgeous and I seen crocodiles gathered around a body of water with horses near them drinking from the water.  Those horses seemed to not care much.  I was nervous for them.

Two Dutch girls on the bus befriended me so I shared a cab with them to the hostel they had pre-booked.  It turned out to be a huge hostel jam-packed with gringos.  I went out with them at night but I was so bored by their same stories and no experience in life but millions of opinions about a culture they do not know that they wanted to share.  I ditched them and made friends with a gorgeous set of lesbians in the park who bought me beer for the next two hours while we hung out and visited in my terrible broken Spanish.  The lesbians said that they play a tough game in a catholic country.  They told me that their parents would think that they were sick in the brain if they ever found out about what they were doing with their pants off.  So, they stay in hostels sometimes to fool around and use any opportunity when they are alone to be a couple anywhere they can in the city.  Both lesbains were attractive.  That is a rarity.  Usually one is a due with a vigina in the relationship.  I hung out with them until 4am when they went home.  I went back to where the gringos were hanging out in the park, listened to them for about three minutes while some guy from Switzerland tried to compare Thailand’s economy to Colombia’s.  I told him the countries are nothing alike and decided I would rather be in bed than have to listen to any more annoying presumptuous bullshit from idiots.  I am really beginning to hate fellow gringo travellers.

“I like to lift my chin up to talk to people every now and then.” – A very tall Norwegian talking about how nice it is to coccasionally talk to other tall people.

“On the subway on the way home, a girl named Oh Ha-na started hitting on me. She was 18 and had bad acne. When she asked for my phone number I pulled the move girls do and said, “Well, I cannot remember my number, but you can give me yours.” Holy smokes, that IS a good move!”
— Learned Deceit: Seoul, South Korea
[View All]