Beaner told me that stench is added to propane because it is actually odourless.  That is my interesting fact of the day.  I wonder how it was agreed on what the international stench added would smell like.  Perhaps someone create a smell and everyone said, “This scent furthermore will represent propane and will never represent anything else.  Hereto, all propane processed on earth will have this specific smell added to its gastric compound.”  That is pretty amazing if you think about it…

I went out for drinks with Tyler and Miera in the evening.  It was a Friday but Regina seemed to be quiet and we had trouble finding fun.  I realized that I miss my friends in this city very much, but I do not miss Regina at all.  As for the city, there is nothing it has that I crave anymore, save for a couple of parties that I would like to participate again.  But the city has some of the most important people in my life and I wish I could spend more time with them.  Perhaps I will have to move to this city for a couple of months and work a lousy job to survive to spend some time here and be around all of my friends here before they are all grown up.

At midnight I called Dan and went to his house.  We bought 12 beer and sat in his basement and just hung out.  It was a really cool visit until 4am.

Dan told me that he bought a 1937 Ford truck in Scobey, Montana at an auction sale for $60.  He got in the truck and it fired right up and he can drive it.  Before he left the sale he sold the fire extinguisher for $40.  When he went to cross the border into Canada with the truck he had to pay a duty/tax on the truck for buying in in a different country.  The duty at the border was $7.

Before I left Dan’s house we fed his Daschhound 1/3 of a bottle of beer.  Dan said, “He is old enough now.”  Ernie the little Beer Dog loves the taste of beer, and even though he is about 6kgs, the beer did not seem to have any effect on him.  He just wanted to have a nap.  I like that little Beer Dog.  Dan told me that Ben, Tyler’s 40kg black Lab/Sheppard cross, and Ernie are buddies.  That happened because one time Ernie and Dan were in the dog park.  There was a young Rottweiler puppy there who just wanted to play with little Ernie, but he was too big and too rough.  So, Dan picked Ernie up and was carrying him.  When Dan later put Ernie down and Ernie went for a run, the Rottweiler puppy came running at Ernie again.  At that moment Ben seen what was going on and came running in.  Before the Rottweiler could get to Ernie, Ben smashed into the side of the Rottweiler, got on top of him and just growled at him.  The Rottweiler ran away.  The Dan said that Ernie fell in love with Ben and followed him around everywhere he went.  Now, that is a pretty cool story about dogs, but the most interesting thing is the psychology behind the scenario.  Ben the dog has a human master named Tyler.  Tyler is friends with another human named Dan.  Dan is the master of a dog named Ernie.  Ben made that connection in his mind and took it upon himself to save Ernie based on their relative positions in life and the connection between Dan and Tyler.  That a dog links all of that together in his mind is totally amazing. 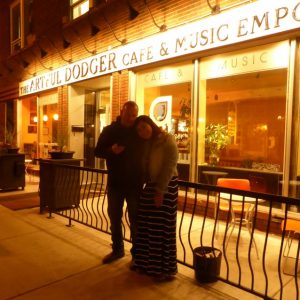 Big Ern, slopping them back.

“We went to Seoul Tower. It is on a mountain, so it overlooks the city pretty well and has a beautiful view at night. There are three hundred feet of stairs from the cable car to the tower entrance and they are the most treacherous set of stairs I have ever been on in public. They were slippery ice and sloped downward. I was hanging onto Hyun Jin’s hand, not to be a man, but because I thought I might go down at any second and she might save me. I failed to mention the 'save' part to her. I think she thought I was being romantic...”
— The South Korea Seoul Tower Non-Romancer
[View All]