Puerto Ayora, Galapagos: The Lion Thief.
June 11.
Muay Consodo.  I do not seem to be sleeping anymore, and that is a shame because I am really good at it when I get to try it.  In the afternoon I headed to the fish market of Puerto Ayora because I heard there is a lot of action there.  The market was finished for the day but there were a lot of pelicans around the place.  Abruptly, a sea lion showed up on the premises jumping high up on the cement dock from the water below.  I was next to a girl and I asked her if the sea lions come often.  She told me that she comes to the Puerto Ayora market everyday to watch them and the action that takes place there.  The sea lions sort of take over the place.  I asked her if the sea lions are invasive or if they respect a little bit of personal space.  She said, “Oh, when the men are cutting up the fish, the sea lions are right there with their noses right next to the men.”  As she was telling me this, the sea lion on the dock had rightfully sauntered in to the fish cutting ledges of the cement market.  He was just moving in slowly, taking his time being casual and inconspicuous.   Suddenly with his mouth, he grabbed a gunny sack full of something and made a quick dash across the cement dock again with the sack in his mouth where in a flash he disappeared over the edge and into the water to not be seen again.  It was hysterical.  He knew he was doing something bad…

A video of my time in the Galapagos, part of this scene is in here:

My friend Stephanie Hess (who’s name is pretty much the same as mine when said drunk) and took a taxi from Puerto Ayora to the Tuneles de Lava (Lave Tunnels) where lava once flowed to escape a volcano.  They are underground and as the lava flowed, the outside edges of the lava cooled in the air to form a casing.  On the inside of the casing, the lava stayed hot and it continued flowing away, leaving tunnels made of hardened rock behind.  The tunnels were as high as 3 meters in places.  It is pretty amazing to think about.

On the farm where we seen the lava tunnels were many tortoises.  I have learned the difference between turtles and tortoises since I arrived in the Galapagos.  ‘Tortoises,’ with regular feet are mostly land dwelling and ‘turtles’ with their webbed feet are mostly water dwelling.  The oldest tortoise lived to be 326 years old.  Amazing.  No wonder they always look so grumpy, they are like angry old people.  The tortoises on this farm were the size of boulders.  They exhale really loudly when you get too close to their personal space.  I am not sure if the exhale is a defense mechanism, or if they need to empty their lungs to create more space inside of their shells to retract into.  A giant tortoise has poop as big as a baseball sized teardrop.  Funny.  I was able to easily fit into a huge abandoned shell.  A hero in a full-shell.  Turtle power.

Once we got back to Puerto Ayora, Stephanie and I went out for dinner to have red snapper again.  Fish is only about two years old in my life.  I did not like it before.  It is amazing how stubbornness really has an effect on taste buds.  What a silly boy I was.  Fish is freaking awesome! 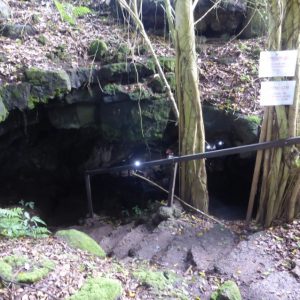 There are lava tunnels on Isla Santa Cruz. 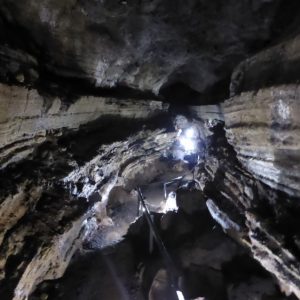 And this is what a lava tunnel looks like. These were underground. When the lava flows, the outside of it cools first and made the casing for the tunnel. The rest of the lava flowed though and this is the tunnel left behind. 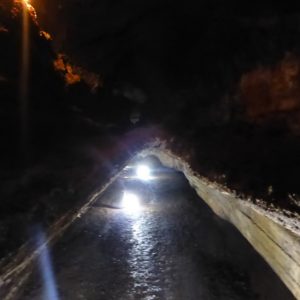 There are some 200 tunnels on Isla Santa Cruz. There are certainly more, but they are yet to be discovered. The lengthiest is 2000 meters long. 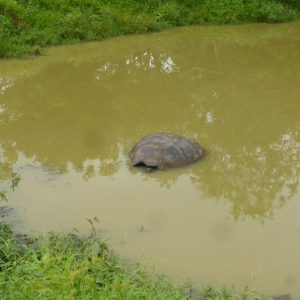 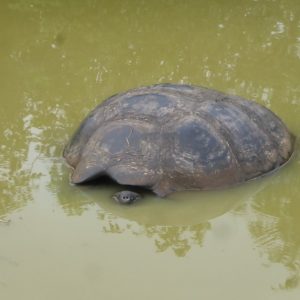 Tortoise. I found out that a tortoise is one who primarily lives on land. A Turtle has webbed feet and lives in the water. All new information for me… 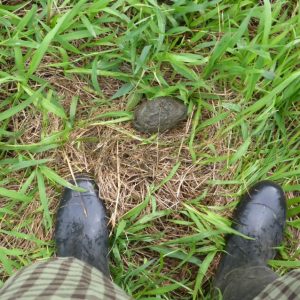 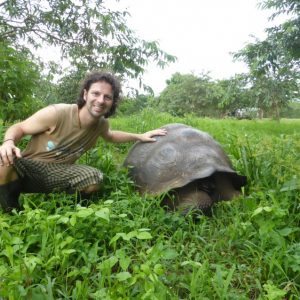 I found out that tortoises exhale loudly when I get close to them. I am not sure if that is a defense mechanism or if they need to empty their lungs so that there is more space inside of the shell to retract into… I am having a better time than the tortoise, that is for certain. 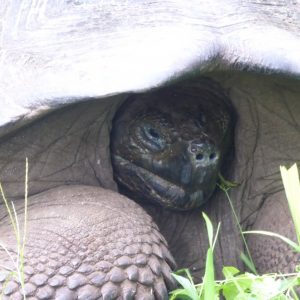 Looks miserable. I would like to meet a happy tortoise, just once. They always an angry old man look. Maybe it is because the oldest one lived to 326 years. So maybe they actually are old grumpy bastards. 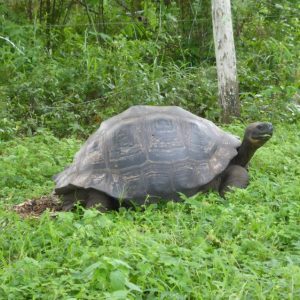 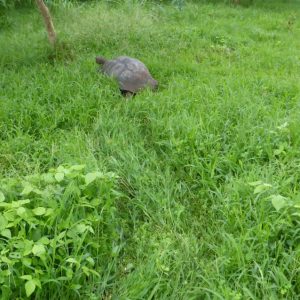 I like the tracks they make in the grass. It looks like a quad bike came though. 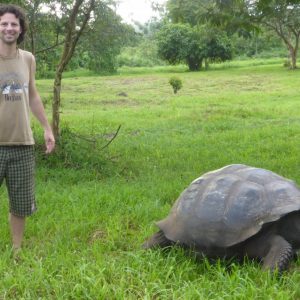 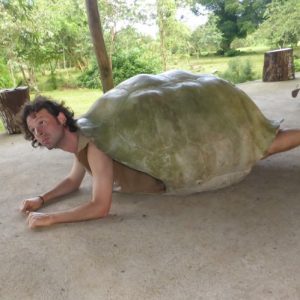 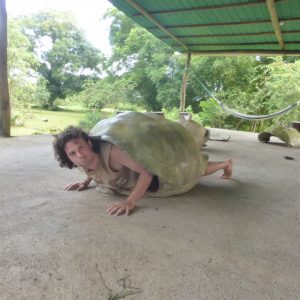 A hero in a full shell, and he’s white.

“Dad and Pat told me a good story.  Apparently they have had trouble with raccoons lately.  On a stormy night a few weeks ago, Pat saw something large in the yard, and shone a flashlight on what appeared to be the biggest raccoon she had ever seen on the farm.  It did not move when she shone the flashlight on it, so Pat ran to get dad and the gun thinking she had hypnotized the raccoon with her light.  Dad was in bed, came running out, naked, with the gun and shot two bullets into the dark creature that still do not move.  The next morning when the sun was out, dad and Pat looked out into the yard to see one of her flowerpots had blown away in the night, and had left large clump of dirt in the yard.”
— My Farm Life
[View All]