Guayaquil to Galapagos Islands – Really, I am in the Galapagos? Awesome!

Guayaquil to Galapagos Islands – Really, I am in the Galapagos?  Awesome!
10 June

Getting up at 6am after going to bed at 2am is not a pleasant experience for me.  At those times I am really glad no one else is around to have to deal with my mental demeanour.  I like a solid 8 of sleep, just to restock the cerebral cabinet.

A taxi to the airport.  Today is Guayaquil to Galapagos Islands.  I was told that I would need to pay a Galapagos fee of $10 before I could even check in.  Sly as I fox, I took no papers with information and made the people behind the counters search for me though my passport, therefore bringing less presentable exposure to the fact that I had only booked a one way ticket.  I did not know if there would be inconvenient immediate return flight booking consequences, but I did not want to find out so I was deceptive.  When the man behind the counter asked me when my return date was I told him, “The 18th.”  He printed off my tax card with an entrance date and I noticed there was also an exit date of ‘No Later than the 18th’ printed on it.  So, I returned to ask him what would happen if I changed my return flight to a later date.  “Nothing, you actually have three months there.”  Awesome.  I checked in for my flight.  They missed my glitch as well.  The Fox Gets Through the Maze!

The flight from Guayaquil to Galapagos Islands was about two hours of charming two older English ladies while flying before my first view of the Galapagos Islands altered my paradise-vision filing cabinet. As we were about to descent, the stewardesses on the plane opened all cabinet doors and fumigated the entirety of their contents as well as our lungs.  No foreign bugs would be coming from my bags or my lungs.  We landed.  $100 entrance fee into The Galapagos Islands upon arrival.  They gave me a map as well.  I decided it was just a very expensive map…

Guayaquil to Galapagos Islands, I am here!

A bus pulled up to the quiet airport on small ‘Isla Baltra’ island, so I got on it.  It took me and several others to the cruise boats.  When I knew I was in the wrong place and just stayed on the bus to take me back to the airport to catch a different bus to Puerto Ayora, the bus driver gave me hell in Spanish and asked me why I did not ask him where the bus was going.  I told him in English that it really did not matter to me and that I had all the time in the world.  It said it was a free tour.  After the right bus, and a ferry ride, I waited for an hour for the next but to take me and three Ecuadorians to Puerto Ayora.  Patience got us and we split a $15 cab four ways for the 42 kms to town.  The leader of our cab committee befriended me and took me around town to find a cheap hostel for me.  $17 a night was the best that we could do. 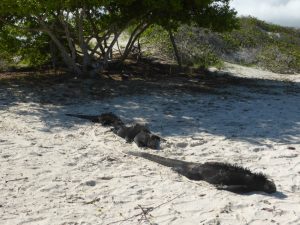 I unloaded and made a Swiss friend immediately.  Stephanie has been here for 14 out of 16 days planned, so I made her my tour guide.  She took me with her to Tortunga Beach (Turtle Beach), one of the nicest beaches on this ‘Isla Santa Cruz’ where there are plenty of marine iguanas catching some rays.  They are very tame and close encounters are easy.  I like them because they look like they have been walking for hours to get to the beach and they are so physically exhausted that they just lay as they fall once they reach the beach.  Funny creatures…

Swimming, white powder sand, paradise, and tiny birds that come within centimetres of your sitting to make acquaintances awaited us.  Stephanie and I made friends with an interrupting Canadian from Quebec and hung out at the beach for a couple of hours.  Few things in life irritate me more than someone who asks you a question and then interrupts you during your answer to tell you something else about themselves, not really wanting your answer but wanting an excuse to talk selfishly and tell you more about what they think you should know about what makes them amazing.  I feel like it is verbal bullying and I am never good at handling this scenario.  I would sooner be alone to work on the thoughts I interpret from what I am looking at than I would like to be with someone who does not really want to listen to what I have to say and only asks questions to be able to talk more…  So, I sort of begin to ignore the person and phase them out of my conversation when I do have something to say.  Other than that it was a great day on the beach on paradise.  At 5pm, the conservation officers came to the beach to tell us that we had to go home for the day.  On the walk back there were lava lizards, and yellow caterpillars hung out on the hot rocks and to say goodbye to the exiting humans.

I picked out the fresh red snapper that would be my fish dinner and we had a feast with some beer.

Life is good.  At the pier after dinner, Stephanie and I went to look at man reef sharks that were swimming around looking for attention, scraps of food and model opportunities for our paparazzi.  Sea lions also lounge about the area on docks.  I went to approach one to take a picture and the sea lion turned, looked, and yelled at me.  I am not even kidding.  I actually got in trouble with a sea lion, perhaps because I woke it up from its slumber…  Then it put its head back down and presumably back to sleep.  I guess it was after 11pm…  I should have been more respectful. 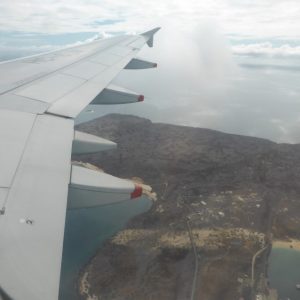 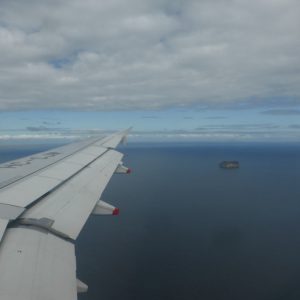 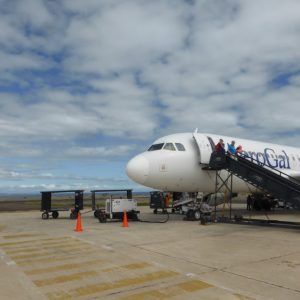 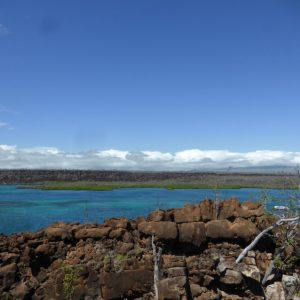 The color of the water… 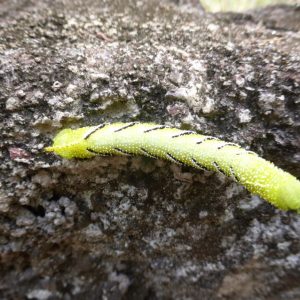 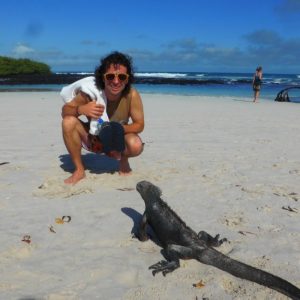 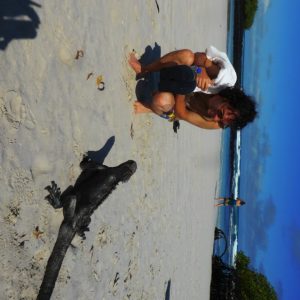 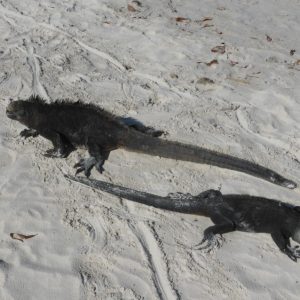 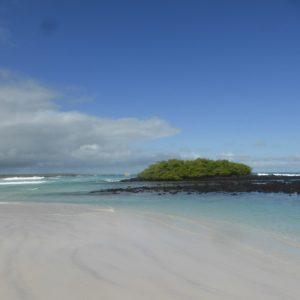 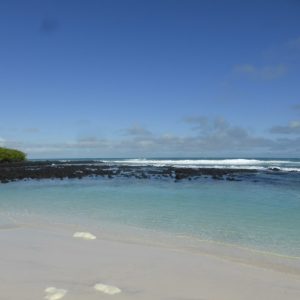 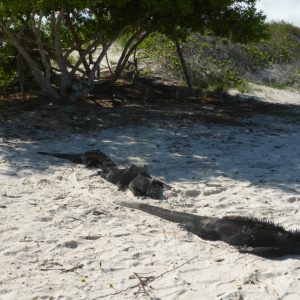 Playa Tortuga (Turtle Beach), one of the nicest beaches on this ‘Isla Santa Cruz’ where there are plenty of marine iguanas catching some rays. They are very tame and close encounters are easy. I like them because they look like they have been walking for hours to get to the beach and they are so physically exhausted that they just lay as they fall once they reach the beach. Funny creatures… 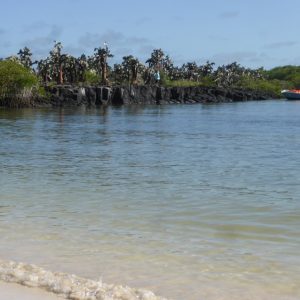 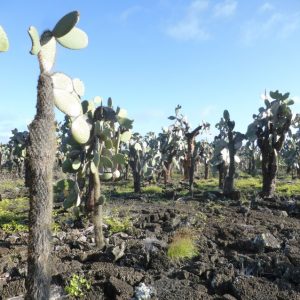 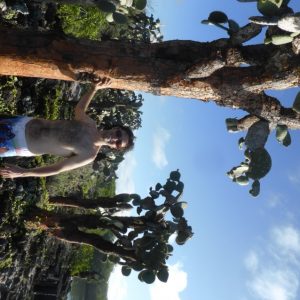 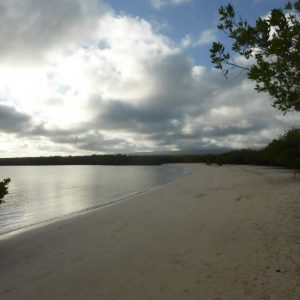 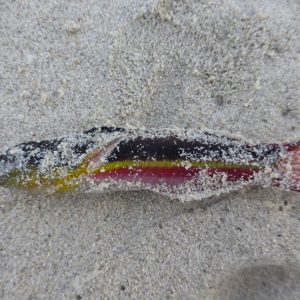 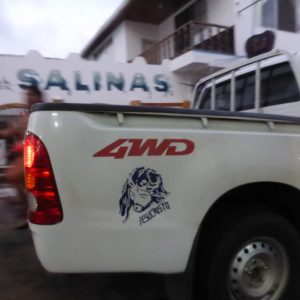 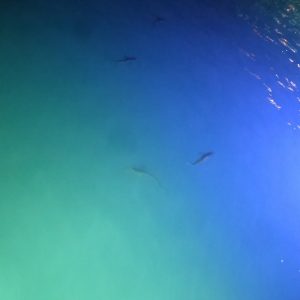 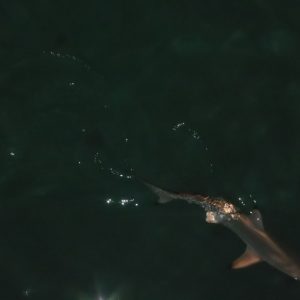 Reef sharks off the Pier in Puerto Ayora, Santa Cruz.

“The school itself is sheet-iron tacked to poles.  It is hot underneath the sheet iron. Tania, who was guiding me around the property, told me that when it rains the school has to stop because it is too noisy to hear anything.”
— Kenyan Schooling
[View All]