My nickname, Beaver, is ‘Castor’ in Spanish, French and Portuguese.  It is the only name I use here in South America.  I never use a last name and treat my first name like I am Elvis or Madonna.  In South America you have to write your name often on tickets, and with no surname usually the man calling names from a group list smirks when he calls out only ‘Castor.’  When I bought a ticket today, a woman at the counter asked me for my name rather than have me write down, which is the norm.  I told her ‘Castor’ and pointed at the Big Beaver Sask logo on my shirt.  When I looked at the name later, she had written down ‘Sask,’ not believing her ears that my name could be Spanish for Beaver.

I caught a $30 boat for just under two hours from Isla Santa Cruz to Isla Floreana.  The tiny dirt town on Isla Floreana is Puerto Velazco Ibarra and has around 100 inhabitants.  There is nothing close to pavement here and the sharp crushed-lava-rock little streets would be tough to travel on barefoot.  I found a beautiful cabin called Hospadaje El Pajas Playa Negra for $15/night on the edge of town.  It is a cabin similar to one from an old western movie, except that the roof is varnished bamboo.  Everything in the cabin is carved and it is incredibly nice with double balconies on either side of the room.  A two tap hot water shower and wifi!  Luxury!  Maybe I will rest here for a couple of days to recharge.

I found a place for breakfast but there was no service coming to me so I peeked into the kitchen.  A middle aged woman who seemed to be feeding a handful of kids looked at me.  We had a small conversation that went like this; Me – “Breakfast?”  Her – “Yes…  How many?”  “One.”  “Yes.”  I went to a table and waited for about 10 minutes and I wondered if she had forgotten me as I waited for a menu.  Suddenly a plate of food and a glass of juice arrived at my table.  The options were that you got what she had.  That cost a fiver.

After a nap I went for a 30 minute walk around town and did not see a soul the entire time.  This is a quiet place.  I walked about 1 km through a lot of rocks towards an area where it looked like a beach was lingering and as I found a turquoise pool of water just off a beach, a handful of pretty 20-something year old girls in bikinis with snorkel goggles on the tops of their heads came out of the water towards me and said hello.  It was like a crazy movie where a man is marooned on an island somewhere and suddenly he finds a pool of water full of gorgeous mermaids who just want to know him and what he can offer them.  There were five of them standing around me asking where I was from and how long I would be on the island while making heavy eye contact.  It was like some kind of crazy dream fantasy sequence taking place in real life…  When they did not all try to make love to me, I figured out that it was actually some kind of weird reality, for the fantasy had a different ending.

When I went out for the evening, I met a very pretty German girl who would not quit talking long enough to actually include me in our conversation.  Nothing is ever worth that kind of torture, so I left her abruptly and went for dinner at the busiest restaurant of the three in town which had two people on the terrace.  There was no menu.  Dinner would be, “Only lasagne.”  “Great, that is what I was going to order…”  The owner of the pizzeria/lasagneria was a lady named Cookie who’s smile could warm Antarctica.  Two beer, lasagna, starter, and desert were $14.

There was no one in the streets at 10pm on a Saturday night in Puerto Velazco Ibarra.  Half of the street lights turned off to conserve island electricity and it seemed like my fantasies had stayed in for the night.  The only humans I could find were on a basketball court where a family was played volleyball with a soccer-ball and across the street from them a group of men were playing cards at a table.  There is no tourism and no tourist offices here.  The gringo fantasy girls from the beach earlier told me that they work as volunteer teachers at the island school where there are 25 students from the ages of 6-18, and there is only one 18 year old, but no 16 or 17 year olds in the school.  This island is Big Beaver except it has sea lions, iguanas, crabs, log cabins, black sand, white sand, a volcanic mountain, Spanish speakers, a tropical ocean, fantasy girls, a basketball court and does not have the greatest general store in the world, Ronnie Aust or Milson Harris.  Otherwise it really feels the same. 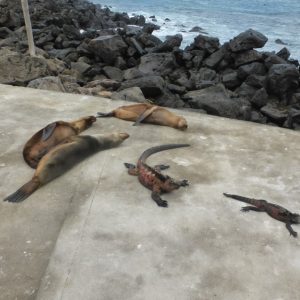 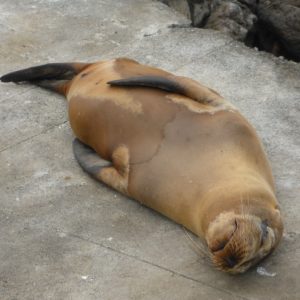 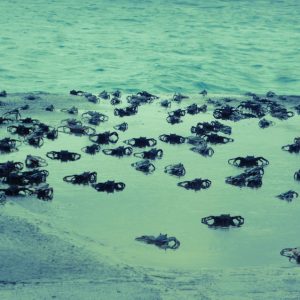 Crabs on the dock. Isla Floreana. 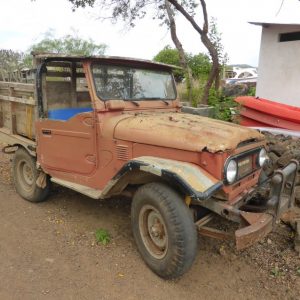 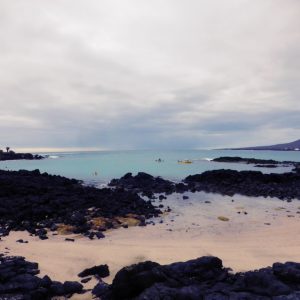 “When I was a little boy, a town close to Big Beaver had a professional rodeo. Sometime during the Bengough Rodeo they used to have a competition for us kids. They would take a six-week-old piglet, cover him in grease, let him loose in the arena and about fifteen or twenty kids between the ages of 6 and 9 would chase him around the arena trying to catch him. Whoever caught him got to take him home to keep. The slipperyness of a greased piglet cannot be overstated...”
— Greased Pig
[View All]