Pineapple, Cucumber, Mint and a mustache straw. (Called the Dali).

Máncora: The Tussler.
June 7
I opened my eyes because someone was waking me up.  It was Mary.  It was light outside.  I was on top of a sheet on a cement floor of a dress shop in Máncora, Peru.  Hard liquor and I are not compatible.  We never work out well.  It is possible that I would have been in this exact scenario had I only drunk beer, but the odds are less likely.  We left the shop, and Mary locked it from the outside.  We got into a tuk-tuk and Mary dropped me off in front of my hostel in Máncora where I went back to bed again from whatever time it was at that moment, until 11am.

I spent the day at the hostel sleeping and hanging out.  It was mostly a wasted day and I am frustrated at myself for not working on writing since I discovered how much I like partying again.  But I made a friend from Slovenia at my hostel.  Eva.  She is the second Slovenian I have ever met and the first on the road.  She told me that they just got Reese’s Peanut Butter Cups in Slovenia 14 days before she lect to come on this vacation.  I told her that I come from a town called Big Beaver that has 55 people in it.  She asked, “55 people?”  “Yea.”  “You mean 5 and 5 with no zeroes?”  Awesome!

Eva told me that got bit by a dog early on her trip in Bolivia.  So, she went to the doctor who put iodine in the wound and sent her home.  The doctor told her, ‘If the dog dies, then I will give you some medication.  But if the dog does not die, then, well….”  Eva left her Bolivian number with the doctor who was going to pay attention to the dog.  Eva’s assurance that everything would be alright was when the doctor told her, “That dog has bit two other people.  They have not died.”  Eva exclaimed to me, “You can not actually get a better prognosis than that!”

I spent much of the night on the beach in Máncora with my Chilean friends.  As I went to pee in the sand on the edge of the ocean, a wave came in and the water rushed in behind me and back out in front of me again.  I looked down about 60 cms from my foot and I thought I seen a snake laying there, which startled me and I jumped about another 60 cms away.  I continued starting at it and then I thought that maybe it was actually just a stick that came in with the tide.  Then as the tide came back, the stick moved, and stick moved and swam off.  I was right the first time.  I have been swimming in this ocean every day since I got here.  For the rest of the night I would be too nervous to go all of the way into the water to pee.

When the Chileans went home, I stopped at the clubs to make a couple of walk arounds.  Mary picked me out in the crowd and was hanging on me.  I sort of blew her off and said I would meet her later.  At the end of the night she found me again, and I wondered how close and how sharing her and Jennifer were.  So, I ended up at the dress shop again to find out.  I suggested that the three of us all sleep in the dress shop.  Jennifer smirked at me, gave me the finger and left to go home.  I remained in the dress shop for another hour with Mary and went home after she fell asleep post-tussle. 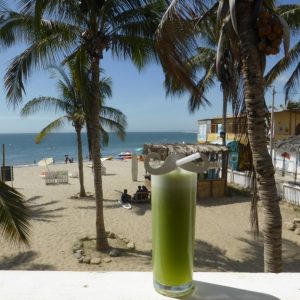 Pineapple, Cucumber, Mint and a mustache straw. (Called the Dali). 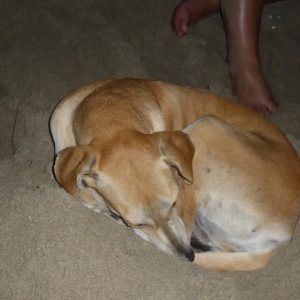 Curled in a hole in the sand on the beach.

“A local guy walked up to me and said, “Hey Jesus, how are you?”  They like my long hair here.”
— Life in Tanzania
[View All]