Popayán to Cartagena: Beating an Airline 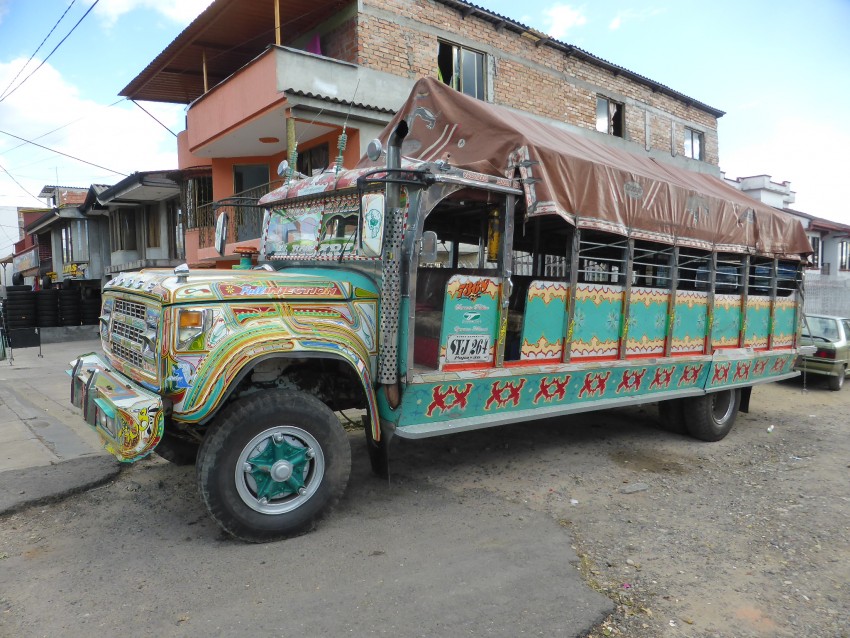 This morning as Lucia went to have a shower before work, I was awakened by a couple moving into the dorm at about 8am.  The pretty girl was apologetic in English rather than Spanish.  A conversation between us took place.  She was from Minnesota and asked me if I was an American.  I told her I was from Big Beaver, Saskatchewan.  She made a funny face and said, “I think I have been there.”  I said, “No you haven’t.”  She replied, “I think I have.  Where is that at?”  I told her it was in the center of the province, six miles north of the Montana border.  She asked me, “Is there a special little general store there?”  I said, “Wow!  You have been to Big Beaver.”  I come from this crazy tiny community, and I meet a girl in a hostel in the bottom of Colombia who has been to my hometown of about 55 people.  Crazy.  She told me that she remembered that there was a lady working behind the counter but she could not remember her well enough to describe her.  But, it would have either been Gail, Maise, or Rhonda.  Very cool.

I am going to miss Popayán.  I am going to miss a beautiful little town where the streets are shared at the same time with cars, bicycles, motorcycles, buses, trucks, taxis and carts with horses pulling them.  It is pretty special to see variety like that waiting together at a red light…

I met with Lucia after she finished her work for the morning.  We went back to my hostel so that I could pack and she cried a little.  A man never likes to see a woman cry, but I have to admit that it does feel good when a woman cries over him.  I think Jen was the last girl to cry over me and that was about 18 months ago.  I forgot how nice that feels inside.  When I was ready, Lucia and I walked to the airport.  That is another great thing about Popayán:  it is the first time in my life I have ever walked to an airport from the center of the city…ever.  Another goodbye to a girl at an airport.  I need to math that out.  I watched her as she sort of skipped to the street after we said goodbye.  That is a cute woman.

My flight was delayed.  The desk ticket man came to me and brought me a new ticket for my connecting flight and told me that my baggage would arrive in Cartagena on the new flight.  I was supposed to arrive in Cartagena at 11pm.  The new ticket made it so that I would arrive in Cartagena very late.  Beating an Airline would be necessary. I seen that flight when I was booking and made sure not to pick it as I did not want to arrive in a new city at 1am.  Especially since my friend Marc was flying to meet me in Cartagena and I have not seen him in years.  I asked the ticket guy what time the flight would arrive. He told me, “1am.  Okay?”  I said, “Well, no, it is not okay, but there is nothing I can do about it…”  In addition to my new ticket that he handed me, he left me with my original connecting flight ticket.

I got on my propellered plane that was four seats wide.  I had forgotten how loud propeller planes are.

This is a little dry and boring, but this is how I found myself beating an airline today;
When I arrived in Bogota, it was cold.  Bogota sucks.  I can only think of cold, rain and thieves.  I checked with two different Avianca Airlines ladies and showed them my original connection ticket from Bogota to Cartagena.  In both cases they told me I will not make my flight.  I caught the shuttle bus to the other airport.  I found the gate on the screen and headed for it.  They had not begun to load the plane yet. I went right the front of the desk though the line-up.  When I asked her about the flight, the girl on the radio and tried to track down my bag so that I could board the flight.  She told me, “Sorry sir, but we can not get your bag as it has been redirected.  You will have to wait for the second flight you are now scheduled for.”  She could not do anything for me.  The plane was there.  My bag was the problem.  I asked her if I could just get on the flight and wait for my bag in Cartagena so that I could be warm.  She told me that passengers and their bags can not be separated.  I understand that for security, but the bag had not been in my hands since they changed my planes.  I did not want to wait for two hours in the airport so I asked her, “What can you do for me?  Maybe you can take care of my taxi in Cartagena.  You have made me two hours late.”  They called the supervisor.  Beating an airline was my goal!

He was my size and they explained the situation to him in Spanish.  I had time to kill.  He asked me, “Do you know why the plane from Popayán was delayed?”  I told him that I am just traveling, and that he works for the company so he is bound to know more than me.  He wanted to know if I knew if it was the weather or what the reason for the delay was.  I asked matter-of-factly, “Why does it matter what the delay was?  It was not my fault in any situation.”  He agreed with me.  I asked him, “What can you do for me?  Maybe they could pay for my taxi to the hostel in Cartagena or else buy me dinner.”  He asked, “Compensation?”  I said, “Yea.”

The supervisor got on a two way radio, and then he handed me a ticket for the plane that they had just loaded.  He told me, “Okay Mr. Harris, you can get on this flight.  Your bag may be on the next plane but you can either wait for it in the Cartagena airport of you can have it delivered to your hotel after it arrives.”  I was the last person to board the plane.  Awesome!  Beating an airline is my game!

It is important to strike when you can, especially when beating an airline.  Because if you wait long enough, life will pass you by…

I arrived in Cartagena, but my bag did not.  Beating an airline is something, but they would not give it all to me…  I filled out some papers to have it delivered to my hostel, caught a taxi to the pre-booked hostel and met with my friend Marc from Montreal who I have not seen in 2.5 years.  Awesome.  A wing-man!

Marc took me to a bar full of gringos.  Then we ended up in a bar full of Colombian hookers.  There were some beautiful women in there, but I was in my version of hell; gringos or hookers.  Yuck.  And C$12,000 Miller Genuine Draft beer.  That is like $7USD a beer…in Colombia.  Hell!

I sat on a stool when the wind went out of my sails because of the price of the place and the place I was in.  A girl from Peru was suddenly standing between my legs.  She was biting my lip.  I made out with her.  I told her all kinds of shit because I was not very attracted to her.  I told her I was a woman.  I told her that I am post-operation.  I did not care if she stayed or if she left.  After we had kissed some, I asked her if she was a prostitute.  Asking a girl if she is a prostitute will make her very angry.  I did not care.  I told her, “Well, a man needs to know…”  She gave me the cold shoulder for a long time so I hung out with Marc at the bar until I guess she decided I was her only option.  Then she came back and was all over me again.  I told her I did not have any condoms.  She told me she only had one.  I told her she was going to have to find more.  I just leaned against the bar and talked to my buddy as this girl ground on me.  I love not giving a shit.  It is powerful.

I was trying to decide whether to go home with her or not.  I did not know if my bag was at the hotel yet.  Also, there were no sheets on my bed.  I decided that instead of going to the hostel to have to put sheets on my bed in the dark when I was drunk, I would just go home with the girl.  So, I gave Marc everything I had in my pockets and headed with her to her hotel. Inside of her hotel she talked to the front desk guy and then she told me that I could not come up to her room.  I looked at her and asked, “Why did you bring me here then?” and I turned around and walked back to the hostel where I put sheets on my bed in the dark when I was a little drunk.  I hate girls like that.  Make a decision and stick with it, either way….

“I met up with Fey after his shift finished and we went to play pool in the local bar again.  There was no chalk for the cues at the pool table and I asked someone where to find some.  I did not get an answer and about 5 minutes later chalk arrived.  Later, one of the guys was laughing when he told me, “We have been asking for chalk for days, and they never have it for us.  Then a foreigner shows up and asks for it and it arrived a few minutes later.  We also need a new cue ball….””
— Life in Zanzibar
[View All]