Cartagena: Life is a Beach

Cartagena: Life is a Beach.
July 30.
I met a very pretty girl in our hostel dorm room today.  She looked at me and asked me in Spanish which bed I was sleeping in.  I pointed to the one beside hers.  She laughed.  It had been dark last night when I returned to the dorm and I found a girl on her phone and asked her to be my light while I tried to put sheets on my bed.  She patiently stood there with a phone aimed at my bed and lit the way for me.  I am a pretty big fan of cute helpful girls.

Marc and I went for a walk around the wall of Cartagena.  Cartagena was seized five times 16th century alone, so the Spanish built a huge wall around the city. The rest of the day was spent at the beach drinking beer where we met a couple of Dutch girls.  This city is full of touts.  Someone always seems to have their hand on you trying to give you a lousy massage so that they can charge you too much money.  After about 15 rejections, Marc finally caved in and let a lady give him a lotioned massage on the beach.  It was like blood in the water the way the piranhas came out.  Suddenly there were four ladies around us on the beach trying to massage everyone, guys had ghetto-blasters and they were rapping along with the music for us, and vendors had crappy items they were trying to hawk.  We were surrounded by people as soon as a gringo decided to spend a little bit of money.  The vultures had found a kill.

Life is a Beach and we have been having a blast.

We went out with the Dutch girls at night for dinner and to party.  A gringo party was taking place in a bar but I was bored when the band was not playing.  Eventually, Marc and I went to find a new party in a bar across the street that was mostly Colombian people.  I met an Englishman there and told him that as a Canadian I spent a bit of spare time clubbing baby seals.  On the walk home Marc and I seen people on the balcony of a place called Hospedaje Montreal.  We talked a lot of shit with the Colombians standing above us and when I went to go into the hostel, two transvestite prostitutes followed me into the hallway.  I dodged them but then they got to Marc and one of them grabbed then end of his crotch through his shorts.  We went home after that.  We were laughing, but tranny’s can kill a night!

Life is a beach in Cartagena. 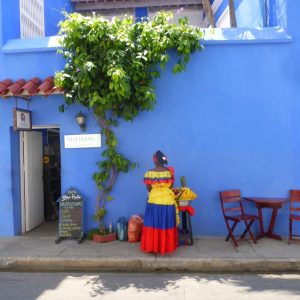 The colors of Cartagena. 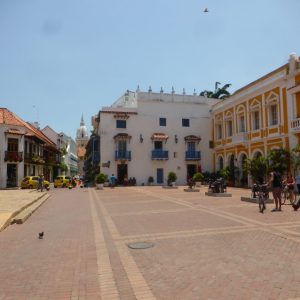 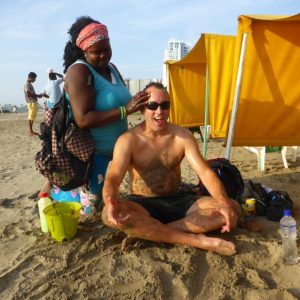 “Uruguay had a deal with Spain to populate the country. For every 100 tons of food that Uruguay sent to the Canary Islands, Spain would send 10 families to Uruguay. People for food. Awesome.”
— Education
[View All]