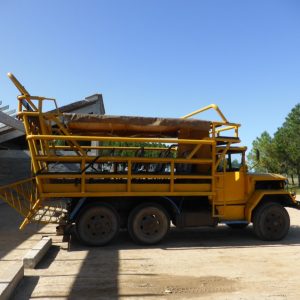 So, we rode a bus towards a town, and then we got off at some sort of station, where we were to ride this truck through the sand dunes to Cabo Polonio, as it is the only way to get there. 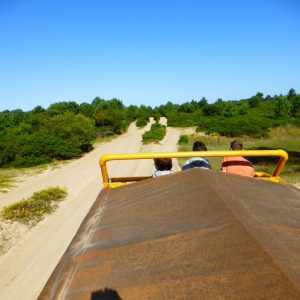 Us cattle got the back racks. 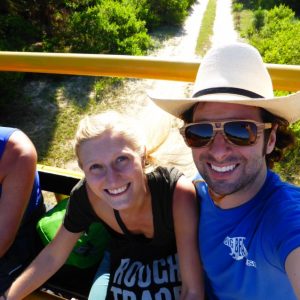 We checked out of the Caballo Loco hostel, where I had made good friends with owner Felipe who told me he was sad to see me leave. There are good people at that hostel.

Irmante and I caught a bus to the main bus transport station to catch a life from Montevideo to Cabo Polonio. My ridiculous hair is making people guess that we are Brazilians, even though Irmante is so obviously Eastern European that the idea of her being Brazilian is complete nonsense…But my untamed locks attempted-ly held in place by a hair-band are really throwing people’s perceptions off. On the bus today Irmante got ‘Finland?’ and ‘Germany?’

The Montevideo to Cabo Polonio bus left at 10:10, just a moment after we arrived at the station. But somehow we made it. It was $464 Uruguayan to get to a building where we were dropped off at 4 hours and 40 minutes later.  There we were to wait for a sand truck. Cabo Polonia is on the beach, but you have to ride in a huge truck where we were racked in like cattle to travel across the sand dunes. It was awesome!

After a very rough ride, we arrived at a strange and beautiful hippie utopia on a hill that 50 other people call home. They catch their own rain water, electricity comes from solar paneling and there is no internet to be found. We found a little posada owned by an old hippie named Fabiana, and for $350 each, we had a bunk in a tiny little room that has a ‘no candles’ policy.

As soon as we left out little hut, a very cute woman named Camella approached us with a tray of brownies. Half of them had marijuana leaves on them. A regular brownie for $15 and a pot brownie for $80. She was super cute and evidently makes a mean brownie because when I seen her about 10 minutes later, half of her tray had already been sold. I like a good adventure, but I can not handle how stupid pot brownies make me. I am nearly incapable of conversation. So, Irmante and I went for lunch and I spend about an hour trying to entice domesticated chickens with bread so that I could catch one to hypnotize for it Irmante. However, they were deceptive chickens who were very leery of me in no time at all.

It is gorgeous here, and I love the emptiness and the vibe of this place. The rolling waves of the beach, the sunset on the hills beside the beach, and the darkness of the night are mesmerizing. We made friends with the other people staying at our posada, joined them for dinner and came back to our terrace to drink beer and wine. I got out the bottle of cachassa that has been in my backpack since Rio, and we drank its entirety in shots. It was a lot of fun, and the absence of light pollution makes for a beautiful Milky Way in the sky. I got high with a guy from Argentina and then I spent a lot of time on the beach studying the sky for constellations I recognize. But, I was too drunk and way too high to be able to make sense and read any of the sky at all, so I came back to the terrace.

My favourite person of the night was Zora, a beautiful Austrian who is in Buenos Aires on a doctor practicum. She told me that the worst patients in Austria or Argentina are the ‘private patients.’ According to her, they are just too much.  She said, “They have pain everywhere, but all they have is depression!”

Gin and tonic sucks. But, I also have quite a sweet tooth. I wonder if all people with a sweet tooth hate the taste of G and T’s?

I sure am glad we came from Montevideo to Cabo Polonio today.  It is awesome and free here.

“Hello Big Beaver, How are you? Right now I'm in India in Arambol. This is my last week here. Yesterday I went to a reggae party to Sporting Heroes bar and I assume that you know that place, is that right?  Because when I was dancing I looked on a table and I found a sticker what is your beaver sticker.  :-)  I was smiling and dancing with you in my mind. :-)”
— A message from my friend Veronica of Hungary who I met in New Orleans
[View All]