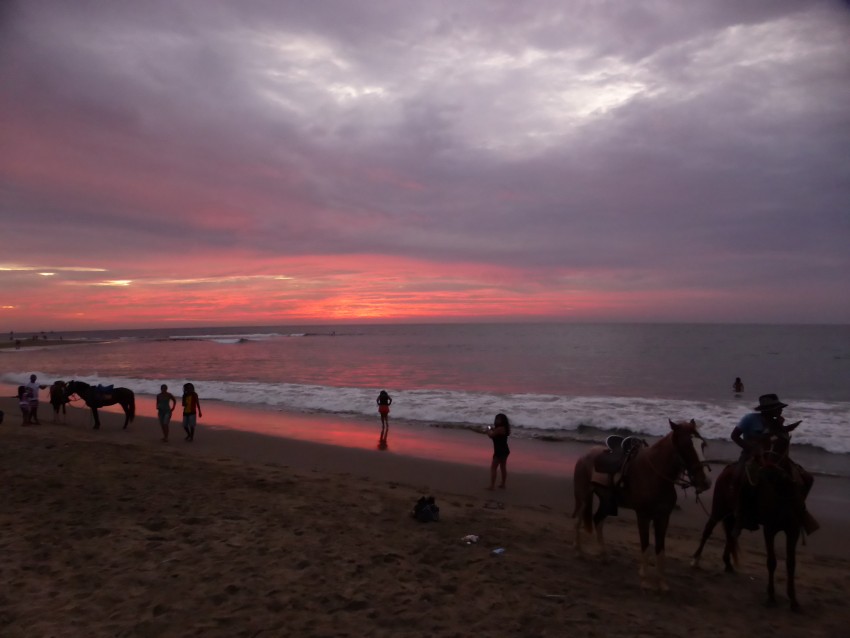 Gorgeous. I like the horses and the sunset on the beach here.

June 6.
Party Boy Wakes Up.
I had a late start, but after a swim in the ocean a girl began walking towards me and she was walking towards me with that walk where you know that the person is going to approach you.  I stood still as she walked my way until she took off her glasses and I recognized her as Angelique from Germany who held the flashlight in Sucre while the English girl peed in the middle of the hostel room.  A friend!  Awesome.

After hanging out with her today, I realized how embarrassing it is that someone from Germany or The Netherlands that grew up speaking German or Dutch and has since learned Spanish has to translate what people say in Spanish to me into English, another language they had to learn.  So, they have a comfortable grasp on three languages while I try to get by on one, and they are not even using their own when they translate from Spanish to English for me.  That is shameful.  I just feel like I do not have enough time to get good at Spanish.  Maybe I need Spanish speaking girlfriend to fix this problem for me!

In my life I am not sure if there has ever been a time where someone yelling at me to get my attention on the street actually had something that I wanted.  It never ends in this country.  To walk down the street means that everywhere there are guys saying, “Taxi? Cocaine?”  Everyone in Peru is a salesman and thinks he has something that you want.  You can not make friends with anyone here.  Angelique and I went to a bar/hostel called Kokopelli’s to have a drink for the evening.  When we sat down on a couch I decided to befriend a young Peruvian guy, about 19 years old, because of his close proximity.  As soon as I got his name and he had mine he was asking me if I wanted to go to a party that he could get me into.  I told him I was fine and got away from him, sitting next to Angelique again on the couch perpendicular to where he was sitting.  You can not make friends with a Peruvian guy because ultimately, within a very short time of meeting you, he will produce a bag of coke that he will want to sell to you.  About three minutes after meeting my new ‘friend’ I heard him say, “Hey!” and he pointed to the side of his pocket where he had a fairly large bag of cocaine that he wanted to know if I was interested in buying.  Fuck off…

I had a little mental hiccup when I noticed me credit card holder was not in my pocket.  So, I downed my drink and headed for my hostel.  Earlier in the day my hostel owner wanted to change the doorknob to my room.  He told me it would take about 10 minutes.  I did not want to wait so I put my trust into him and gave him my room key and told him to just leave the new one at reception.  I had kind of befriended him over the past couple of days so it seemed like a casual move.  When I later returned and collected my new key I noticed that my bathroom light was on, and thought that was peculiar.  I guess the owner needed to use my toilet.  When I changed for the evening, I took everything out of my day-shorts pockets to put them into my night-shorts.  As I transferred my right front pocket, there was only a pack of gum and some coins, which my subconscious picked up on, but my consciousness only thought was a little peculiar and I did not take the time to think the situation through even though somehow that seemed odd.  Fast forward 2 hours and I am in the bar/hostel where I discover that my credit card holder is not in my right front pocket.  Fuck!  I told Angelique it was missing, downed my drink and we headed towards my hostel.  Of course all of the signs suddenly made sense.  I had been ripped off.  Why do people even bother trying to steal credit cards anymore.  You can hardly get away with using them.  All you do is inconvenience someone else’s life for nothing.

As I entered the hostel, the owner was sitting at the front and he said hello to me.  Thief!  I could barely muffle an answer to him and I headed towards my room in a search to confirm his guilt.  I checked my shorts.  No credit card holder.  I checked my jeans.  Nope.  I checked the table.  Nope.  It was gone.  I checked my money belt to see if I still had a passport.  It was there.  I went to check for the money I had stored in the belt.  When I tore back the zipper, there was my credit card holder.  Fuck…  I am a creature of habit and when i do things differently it really throws me off.  My memory came back to me.  On the bus ride here to Máncora I had hid it in there in case it fell out of my pocket as I fell into sleep on the bus.  Relief.  A shrewd personal move, but a sloppy memory caused some stress.  But, the most amazing thing from this experience was having to face the hostel owner again as we left the property once more into head into the night.  Of course he had no idea what had just taken place and all of the scenarios involving him perceiving his theft in my mind.  I found it amazing that I felt so guilty that I could barely make eye contact with him to say goodbye again as walked past.  I sort of swallowed the words into a strange sound that was supposed to be ‘Bye’ as we headed back to the beach.  The psychology of the mind is fascinating…

Angelique went to bed, so I had to make friends new on the beach.  A Chilean couple and a Ecuadorian newlywed couple were lighting the candle to a Chinese lantern to let off over the ocean as a token of their new marriage.  It only went fifty meters or so into the air before the wind blew the candle out and the lantern descended into the ocean.  It was hard to not make bastardly comments on the possible comparisons to their impending marriage.  They began feeding me shots of a strange Sambuca smelling liquor from Colombia.  I warned them that that hard liquor and I are not a match, and that it would be in my best interests to go to bed immediately.  All four were really nice people and the Chilean man had been in Canada on a working visa in 2010.  He told me, “I am dishwasher. I am buser.  I am flyers.  But Olympic job.  I gonna remember forever.  Friends say, ‘Wow, the Olympics!’  Best experience of life!’”  His enthusiasm was contagious.  His girlfriend, also Chilean, told me that her grandfather came from Jordan.  I asked her, “Do you like him?”  She said, “Yea.  But he is dead.  I never met him.”  I liked this couple and the way they talked so much.  They were a highlight of the evening.

When everyone wanted to go to bed I headed to the bar to finish my drink.  A Peruvian girl sat in a swing next to me and hooked one of my legs with her leg.  Her breasts were too big for her body size.  The friend with her was talking to me and they wanted me to join them as they were going to eat.  I did not feel like food as much as I just wanted to keep on partying so I let them leave and watched them walk away through the sand, looking back over their shoulders at me.  About 20 minutes later when it seemed like everything was going to close for the night, I went for a small walk into town.  The two Peruvian girls were eating hamburgers and came into the street to grab me to get me to come over to where they were sitting.  Mary was the one that liked me and Jennifer was the name of the friend.  They asked me if I was going to come with them to their house.  There was no way I was bringing them to my hostel so I decided I would join them.  I was not ready for bed.  Party Boy Wakes Up.  We jumped into a tuk-tuk motorcycle taxi and headed through town.  Mary’s hands were all over me.  They were talking in Spanish and from what I could sort out through words I know, we were going to Jennifer’s work shop.  When we pulled up to a row of small stores and the girls got out, they unlocked as tiny store which we entered.  It was a dress store that Jennifer owned that she sells women’s clothing from during the day.  She found a stuffed animal and threw it on the cement floor.  Then she took a sheet that she laid out in front of the stuffed animal, and walked out the door.  I realized it was a pillow and a blanket.  Mary turned off the lights and we went for a tussle on the sheet.  Crazy.  I am not sure where that all suddenly came from.  Life is a fascinating circus sometimes.

“Giving a man beer is more effective than giving a man money: A) it is a thoughtful gesture. B) you can give a man $10 worth of beer, or you can give him $20 cash, and the $10 worth of beer will feel like it has more value. C) almost all men like beer. D) the man receiving the gift knows that you would sooner be drinking the beer yourself than giving them away, so it really reflects the importance of the situation. E) when someone gives you beer, you naturally cheer inside of yourself at the awesomeness of the gift and you will do all you can to help a person who would give you such a present. F) beer says ‘thanks’ in a way that no words could ever stress by speaking.”
— Bribing Namibian Cargo-Train Drivers
[View All]