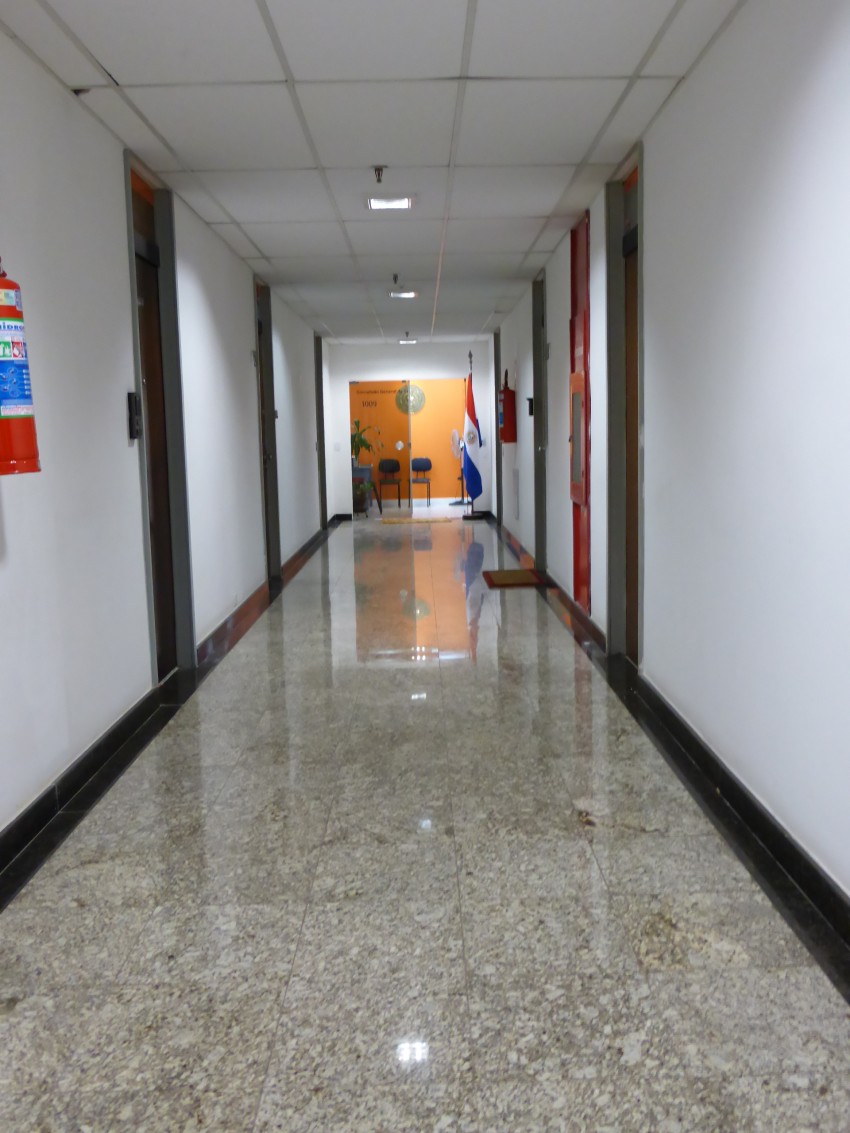 And then we headed to the Paraguayan consulate. Because I have a Canadian passport, which is about as convenient as a Federation of Russian passport in South America, I have to buy visas in advance for some countries. We have decided to go to Paraguay because none of us knows anyone who has ever been there before and none of us knows anyone from Paraguay. So, we have no idea what we will find there. But this is the Paraguayan consulate in Rio de Janeiro. I have never seen an empty consulate before, anywhere. That means our trip through Paraguay will either be the most interesting thing that we ever do, or the least interesting thing that we ever do. I can not wait to see what is there. Paraguayan Consulate Rio de Janeiro, Brasil.

It was hot and the mosquitoes who used to bite Csilla at night, have found me at the half way point to her room and, being lazy mosquitoes that they are, dine on me instead so Csilla no longer has bites in the morning.  You are welcome!  They were relentless to me last night and I could not sleep until 4am and I had to have a shower to make myself tired enough to sleep.

We got up at 11am.  I am always first up and no one was moving this morning at all.  I needed to get to the Paraguayan embassy for my $90 US single entry visa to be installed into my passport where Emilio was once again working.  He really liked my ‘Bad Mother Fucker’ belt buckle and visited with us some.  Then he gave us his phone number to meet him for a beer after work.  Awesome!

Csilla confirmed that we will be going with one of her friends to try ayahausca tomorrow to meet our inner spirits.  As a result, I am not allowed to consume anything potent to the body such as sugar or alcohol before ayahuasca.  But, Irmante and I met with Emilio at his house to hang out and he told us about Paraguay. I asked him about his job and how it is in the office.  He told me that there are four people who work in the office.  My visa today was the only one he had to make all week!  But, he told us that he has to do a lot of things for import and export business.  We had a ton of laughs at his house.  He is the first person we have ever met from Paraguay.  Neither Irmante or I have even met anyone who has been to the country before.  Emilio’s Paraguayan buddy Ivan came over.  We went from zero Paraguayans in our life, to one, to double that amount in the same evening.  And if the rest of the population there is as cool as Emilio and Ivan, then we are in for a treat!

Irmante and I came home and I got ready for before ayahuasca of what tomorrow will bring.  Before ayahuasca, we have to get up early to take a subway to meet a girl in the center of Rio.  Then we will take a bus out of the city.  Then we will walk for an hour into the forest to a church.  There we will help them to do some work to the place and then at night we will drink the ayahuasca.  In preparation before ayahuasca, I spent $45 Brazilian Reals on huge candles for the seance.  There should only be about six or so of us there for it and we do not come home until Sunday evening.  It is going to be a crazy adventure.  I have been trying to eat well for two day so that I do not vomit much or not at all.  Csilla has a friend who hallucinated that she was vomiting huge snake when she was sick from it.  I have no idea what this is going to be like, but I am fascinated by what this will bring to my mind…

“Riding a motorcycle changes everything. I wore my black chaps, gray 1980’s cowboy boots, and 1980’s brown leather jacket all day, everywhere I went, including into stores like Canadian Tire to buy parts. Kids who are about 10 years old stared at me like I may have been the man who invented the word, ‘Cool.’ Other bikes give you the ‘heck yeah, biker brethren’ wave. Two girls in a car honked and waved. Being a biker seems like it is going to be alright...”
— Becoming a Biker
[View All]