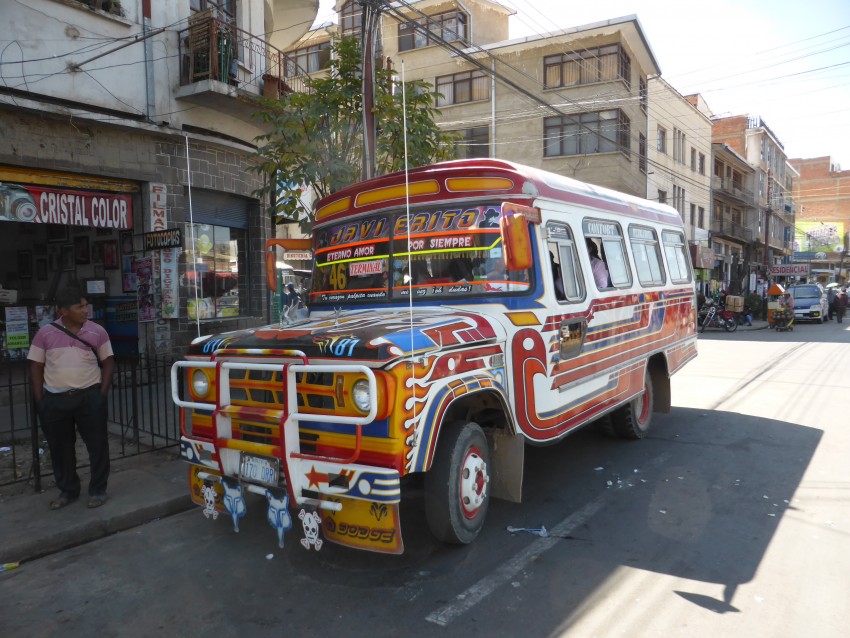 All of the buses in Potosi look like this, but this was my favorite.

Cochabamba to La Paz: Living on Buses.
May 6.

We arrived in Cochabamba at about 6am.  I ran into an Israeli/Dutch girl in the bus station there that I knew from Potosi and Sucre. The Dusty Gringo Trail…

We caught a taxi to a hostel that seemed to be in the middle of nowhere, which also seemed to be in the richest area of the city, which we assumed was the part built with cocaine money.  We stayed at the hostel for about 2 hours, making decisions and decided to just get out and got from Cochabamba to La Paz.  So we rode a bus for about 10 hours to a city where we had a ¼ of chicken to eat, drank two beer and got on a bus for another 8 hours.  We wasted about 6 hours of travel just getting off the main highway to Cochabamba and back.  The bus from Cochabamba to La Paz had lay-z-boy reclining seats was 25 Bolivianos ($4) for 8 hours of driving.  Bolivia kicks a lot of ass.  I love this country when I am not cold.

At the station where we bought our bus tickets from Cochabamba to La Paz, a pretty girl with very tight pants was part of the sales team.  I commented on her camel toe in English by shaking her hand telling her that she had the best camel toe that I have seen in a while and that in fact she had the best camel toe in all of Bolivia.  I feel like I can get away with a lot here.  Then when the bus company they wanted me to enter my name and passport number on my bus ticket I put Beaver as my first name and Eater as my last name.  Maybe not getting to shower for a day puts me in a mental state to match my outer appearance…

On the bus ride for the last three hours heading north to La Paz there are traditionally dressed women lining the road every two kilometres or so.  They have huge wicker baskets in their hands and children standing behind them, as they vend homemade food to anyone who will stop on the side of the road.  Sometimes they seem to be in the middle of nowhere, even in the darkness of night, and there are no houses or villages in any direction that can be seen.  It looks to be lonely hard work to maintain an existence.

After about 25 hours of buses in the past 30 hours, we arrived in La Paz, a beautiful city on top of a mountain.  We checked into Loki Hostel and in the bar was Team Sweden.  Awesome!  The English like to drink shots and spirits, two things I do not enjoy, but I tried to play the game.  We ended up in some bar where a bleached blond Bolivian woman made out with me and tried really hard to take me home.  I had to get up from the table to keep away from her.  At the end of the night, Tom and I got in a taxi to find some food.  Two pretty girls kept on staring at us while the man sitting with them really us.  I was fairly tight and spilled my beer all over the table and they left about a minute later.  Somehow, the night was a blast and we got home at 5am.

P.S.  I just found this in my notepad, written in very drunk handwriting….
‘Sometimes it is hard to remember that hot girls have been hit on for 1 million years, and when you are just being friendly they can sometimes be cunts.’

“People here in Zanzibar are not so tied to technology, so they are not so busy with nothing, yet, and they have time for other people.  Do you ever/always feel like there are not enough hours in the day?  There seems to be too many hours in the day here.  If you need to go somewhere to do something, and it will take you an hour to go there and back, but you do not really know how to get there because you are new, someone local will for sure take you.  I am not talking about touts who are out to make money off of you.  I am talking about the local people who just want to help out and take you around to do your chores out of the goodness of their heart.  It is not about finances.  It is because they are kind and do not have anything to do until 15:00.  Even when I do not have anything to do until 15:00, I still have 60 things that I could/should be doing.  Somehow, we have it all wrong with the way we are in our busy western way of thinking, and we are forgetting about the decency of humanity in our selfishness..”
— Life in Zanzibar
[View All]