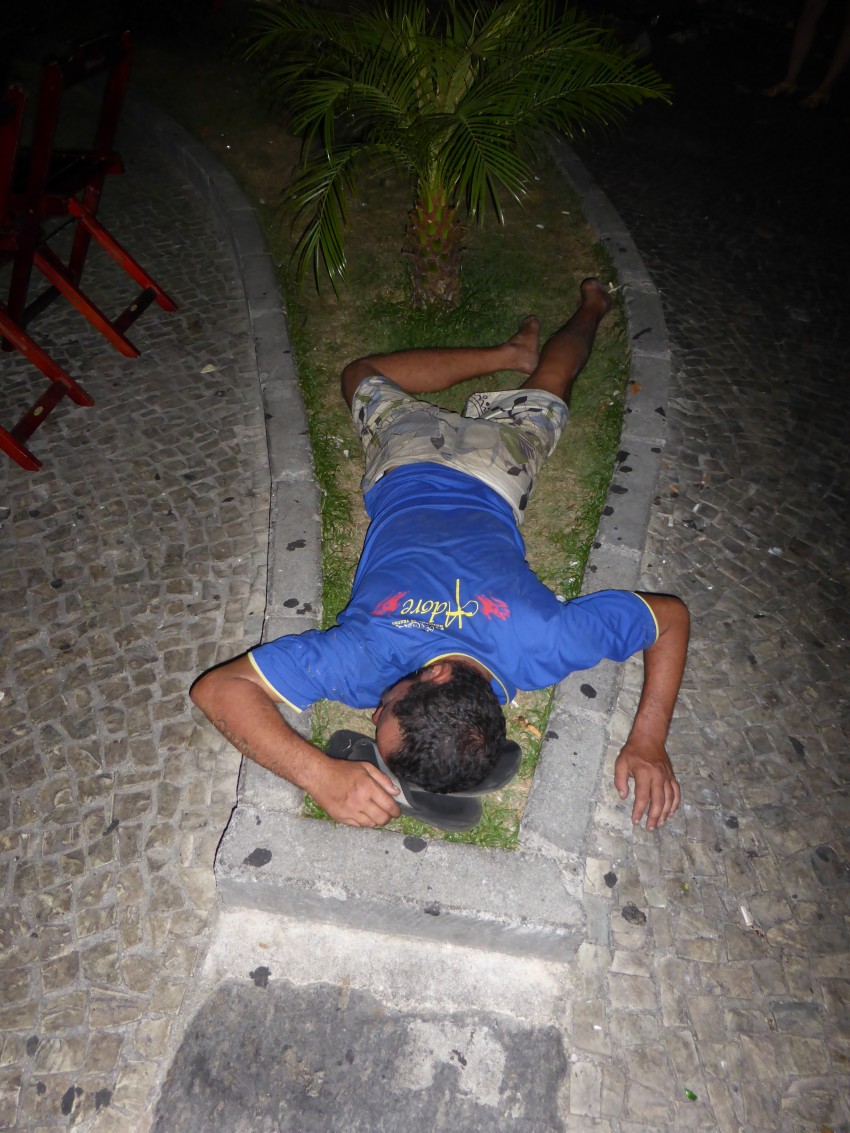 Cash, Csilla, Irmante and I met with Scottie, Shanna, and Marie in the afternoon to do some sightseeing.  Scottie told me that he was having a hard time calling the car rental company.  He took the phone number down the the front desk at his hotel to ask some questions and they told him he had been calling the postal code…  Awesome!

We had a beer and sightseeing turned into partying instead.  We found a bloco party  that was a weed bloco and everyone was partying and smoking grass.  The police allowed it to happen and just stood on the sidelines while music played, people danced, people smoked and people drank.  Carnival Partying is a crazy time.

I was having a really hard time to find party gear, so I got a little high.  But then all I wanted to do was look at things and infrastructure around me. Carnival Partying is a crazy time. became the furthest thing from my mind.  So, that did not work out well.  I hung in there and kept on drinking beer until old familiar took over.  And then party boy showed up to hang out.  And then I was a lot more fun again.

We left the bloco and came to the favela to eat and relax.  Then, when we decided to meet our friend who was working as a bartender for a party in a hostel, we headed into town, but the line-up was full of gringos and the last thing we are interested in doing is hanging out at a white-person party in Brazil, so we pulled the plug and headed home.  I would sooner get a good night of sleep than hang out with stranger travelers right now.

I was talking to Scottie about the video that I made of him.  He said, “Those tranny’s loved being tickled…”  Wow that is a funny quote.

“A hooker fight is taking place right at this very moment as I write this blog before going to bed.  They are just below my window and in front of the bar I was in last night.  Some of them out there last night were very pretty.  The audio levels of high-pitched African female voices screaming at each other are crazy.  They go from yelling to screaming, to squealing, to yelling.  It has been taking place for at least 10 minutes.  I would love to be downstairs watching it right now, but I am too afraid of being murdered.”
— Life in Tanzania
[View All]