Swaziland to Lesotho: The Renegade Bus

March 24
Swaziland, a country where your mini-bus driving 80 km/h uses no signals to pass a police car in a 40 km/h zone.  Actually, we nearly rear-ended the police car because we were driving so fast… No issues.  No second guessing…

I have met a guy here who has never ever heard of McDonald’s.  That is amazing.  That is beautiful!

Swaziland is a safe country.  They still have the death penalty here, but hearsay is that no one has been executed in over 20 years because no one wants the job of being the executor.

The country has extremely traditional festivals such as the Reed Dance, which is an annual festival where 20,000 topless maiden/virgin girls dress in bead mini-skirts and dance for the king.  Sometimes, the king chooses a new wife from these girls.  The previous king had 70 wives.  I would not mind being heir to the throne in Swaziland if anyone out there has any connections for me.

Oh wait, I just found this in a Swaziland Travel guide:

Choosing the King
The heir to the throne is chosen according to his mother’s status and a Queen Mother is selected, based on her rank, by the Royal Council following the king’s death. The King is always a Dlamini and never intermarries so the Queen Mother may not be a Dlamini. The king must be her only son and is expected to choose wives from various clans to ensure national unity. The monarchy is a dual one with the balance of power lying with the King – Ngwenyama (or lion), and the Queen Mother, who is the Ndlovukazi (she—elephant).

But, I think I should come back for these two festivals. These sound fascinating!

The lncwala Ceremony
The lncwala, or first fruits ceremony, in which the King plays a dominant role, is the most sacred of all the Swazi rituals. It is held in December or January on a date chosen by astrologers in conjunction with the phases of the moon and sun. The ritual begins with a journey by the “Bemanti” (people of the water) to the lndian Ocean to collect water and on their return to the royal kraal, the little lncwala begins, on the new moon. At the full moon, youths from all over the kingdom travel to collect the sacred branches of the “lusekwane” shrub, a species of acacia. On the third day, a bull is ritually slaughtered by the youths, instilling solidarity among them and a spirit of valour. The fourth day is the culmination of the lncwala when the King, in full ceremonial dress, joins his warriors in the traditional dance. He then enters a special sanctuary, and after further rituals, eats the first fruits of the season. Once the King appears to his people, they may also eat these fruits with the blessing of the ancestors.

The Umhlanga (Reed) Dance
This takes place in late August or early September and is a ceremony involving young maidens to honour the Queen Mother. Most of the participants are teenagers, although some of the girls are younger. Over 20,000 maidens gather reeds from selected areas and the day of the Umhlanga begins with bathing and grooming prior to appearing before the King and Queen Mother. The girls wear beaded skirts with anklets, bracelets and jewellery and colourful sashes. The royal princesses wear red feathers in their hair and lead the maidens to perform before Their Majesties.

I feel like there is much more to see in Swaziland, but I am running out of time.  So, I was up at 06:55 and was at the bus stand by 08:30 where I waited for the bus to fill up to take us to Johannesburg.  Eventually at 10:30, after two hours of sitting in the hot, waiting for the bus, we were on the road and passed through the border into South Africa.  There were free condoms in the immigration office and then there were more free condoms in the bathroom.  I loaded up.  I am not doing those things right now because I am afraid of what I have been refereeing to as the “vagina kiss of death”, but a free supply of condoms is not one to pass up!

We arrived in Johannesburg at about 15:00 and I had a task of trying to find a bus to take me to Lesotho.  I was directed to a bus stand/street/parking lot where I had to ask about six different people which one of the 100s was the bus for Lesotho.  Eventually, someone pointed to a massive line-up that went way way down the sidewalk down the street.  Great…  I asked the people in the line up.  Yep, they were heading to Lesotho.  The Thursday before Good Friday….  Everyone from Lesotho working in South Africa was heading home… 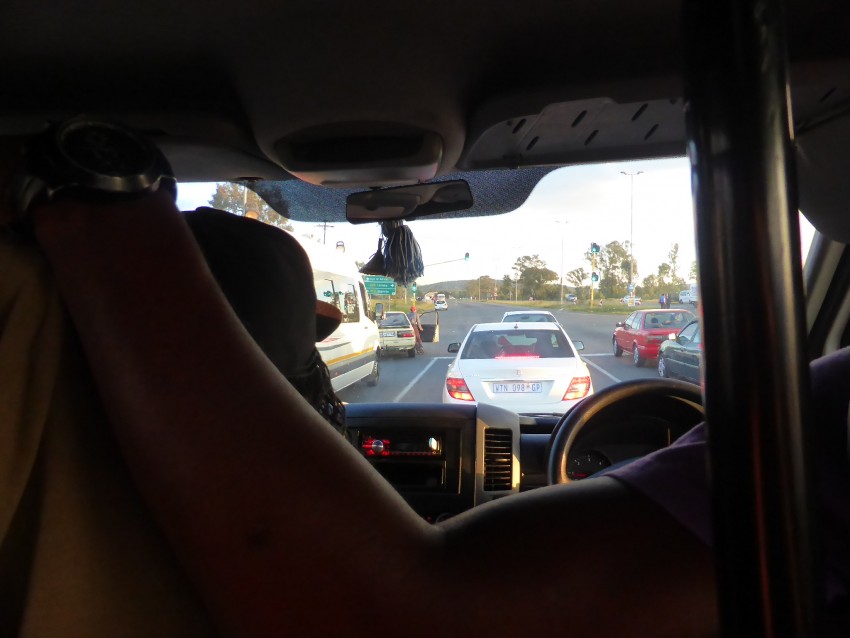 So, I was in amidst a crowd of about 5,000 people and I was in a line-up for Lesotho.  There was one white guy in that line-up.  I was him.  It was going to take hours just to get to a bus to drive us for five hours to Maseru, the Lesotho capital.  After about 40 minutes, a man came up to us and counted 12 of the people in the middle of that line up.  He told us to come with him.  He was not sure whether to count me in or not because I looked very out of place, but I was for sure in and we 12 broke from the line up and chased after him running down the street.  He took us to a renegade van with a smashed side window.  We jostled for seats, climbing over each other to get in and we were off to Lesotho.  240 South African Rand ($15.50). Extremely loud traditional music blared for the next five hours as we drove. 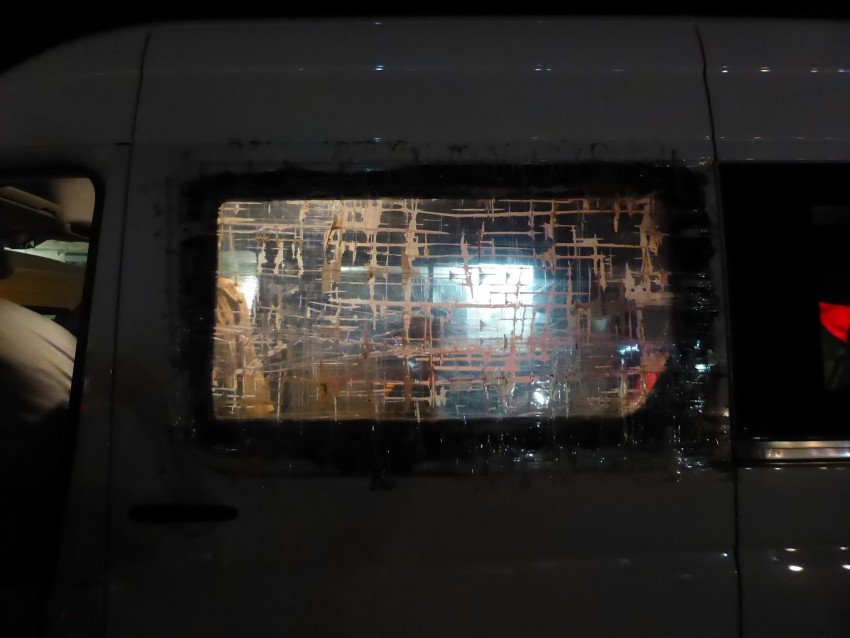 There are Dutch words everywhere as you drive through South Africa.
South Africa is crazy busy right now with people moving because of the holiday.  And there are people everywhere right now.  And I really mean everywhere.  Even in the countryside, there are line ups of people through the trees to the sides of the road, waiting to catch a convi-van to transport them somewhere else in the country.

I made friends with a man named Kevin who was seated beside me.  When we arrived at the South Africa/Lesotho border, he and I got out of the van and walked through the border to Lesotho and on the other side his girlfriend and her three kids came to pick us up at a gas station. 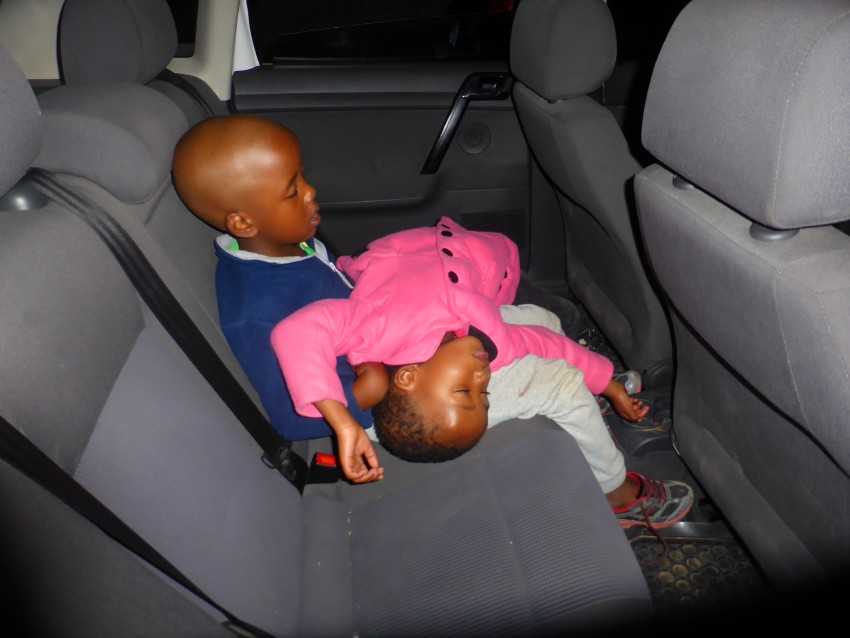 Kids are made out of rubber. Could you imagine sleeping like that?!

Kevin and his girlfriend were going to drive me to a backpacker hostel, but did not quite know how to find it.  Trying to get someone from Africa to read a map is a real chore.  Maybe they are never taught this skill in school because it is always seems like when I am showing someone a map, they are seeing one for the first time in their lives.  It is always like this.  More often than not I have found that Africans would sooner drive in some random direction, with no idea of where they are going in hopes of accidentally stumbling across the place, rather than looking at a map.

Kevin’s girlfriend did just that and could not find the hostel, and did not want to look at the map.  I could feel that she was getting impatient so I asked her if she had a room to rent me for the night.  She did.  Perfect.  She took me with the family to her house. 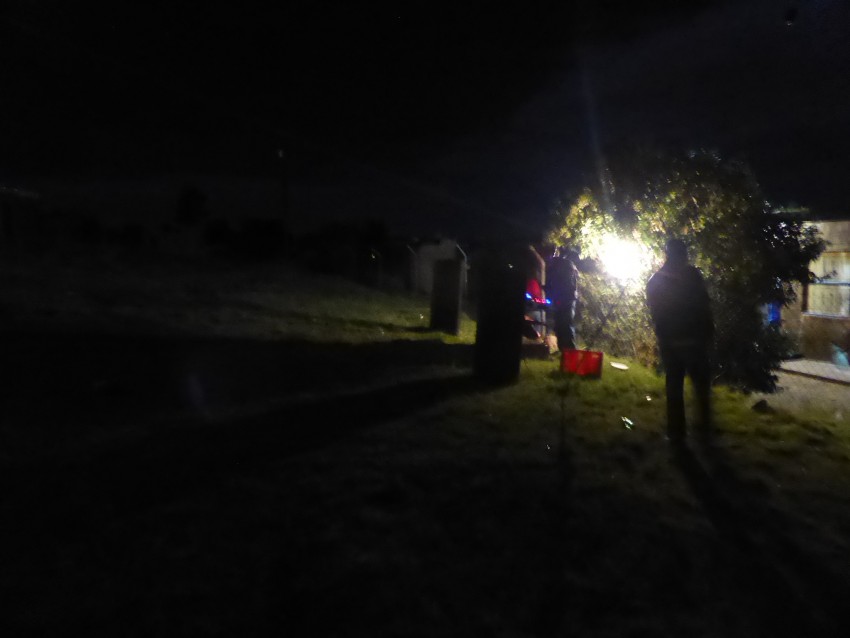 The finished party that I wish I had not missed and would have had the energy for.

A party was taking place as her son had a DJ on the front lawn in celebration of his 28th birthday.  The party was nearly over though and only about six people remained.  I went to make an appearance and say hello.  Three of the six remaining were grinning girls.  I was too tired to be fun.  Nine hours in a min-bus will take the wind out of good sail.  So, I went into the very nice house of Kevin’s girlfriend where I chatted with the two of them until 02:00.  By then, everyone was struggling to keep their eyelids open and we all went to bed.

It would have been nice to have been at the house four hours of less travel earlier, but, nonetheless, it sure was nice to be in someone’s home for the night…  Sometimes a person really gets lucky with who they meet! 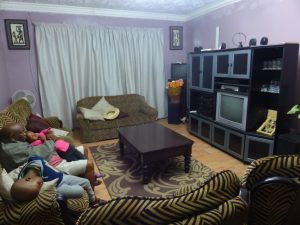 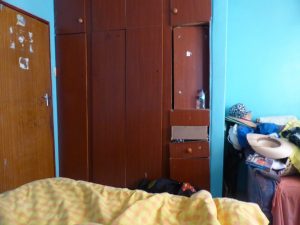 My own room in the house! Yes!