April 27
Dani was moving at 08:00 so I pulled myself totally out of a slumber as well to get ready for the day.

Big idea – Hiking up Table Mountain – the geological and spiritual heart of Capetown.

We had plans to meet Dani’s friends at 10:00 to conquer the mountain on foot, but it started raining which put out everyone’s fires.  However, I needed to see it so I just took the cable car up the mountain for 240 rand ($16.62).  That turned out to be a good move because I met someone up there.  More on this later… 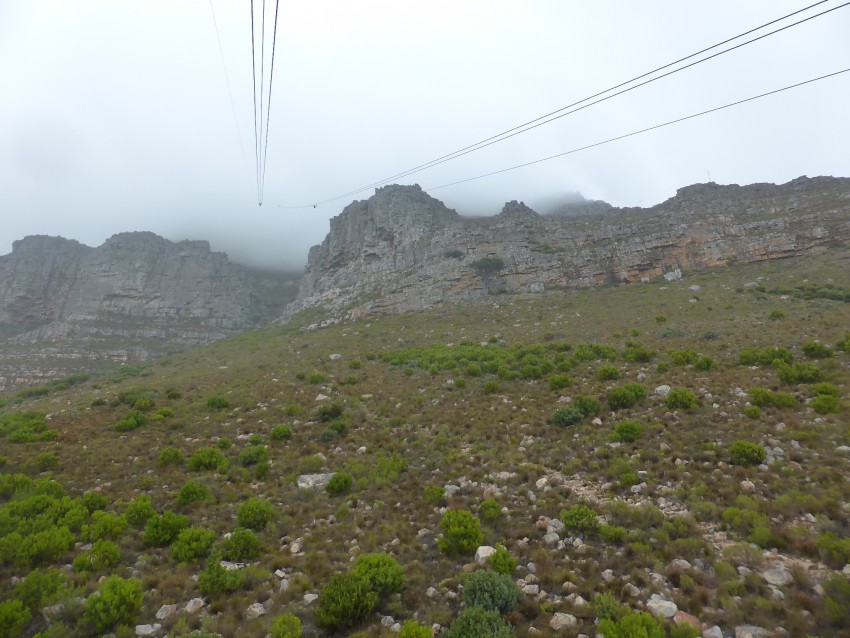 The rocky top of Table Mountain.

The cable car on the way up has a floor that rotates so that everyone standing makes a full revolution during the journey to the top.  I was trying to take photos, but I ended up being very distracted by a very beautiful woman who was also on the cable car who made my mind run. 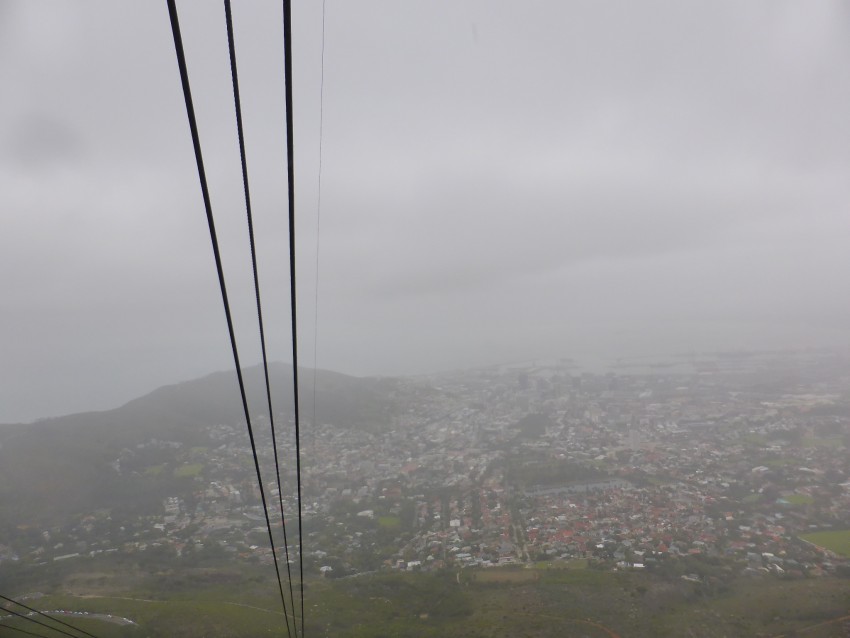 Capetown from the mist on the way up Table Mountain.

Upon arrival at the top, the mass of us in the car moved out and onto the mountain.  The beautiful woman was not far ahead of me so I struck up a conversation with her.  Sumi is an airline hostess for Emirates and she only had a couple of hours to spare before her next flight.  She told me that there are 22,000 airline hosts and hostesses just for Emirates alone.  So on every flight she works she meets new coworkers.  If she likes them at the end of the flight, they go out and party in the city they have arrived in.  If she does not, she gets to spend the night by herself and uses the spas in the luxury hotels Emirates hosts them in.  It is a fresh delivery of new people in your life and a constant supply of new world cities to party in with those people, as well as a job that pays pretty well and a free apartment supplied for you in Dubai…  Wow! Somehow I missed this calling a few years ago.  That job was tailor-made for me… 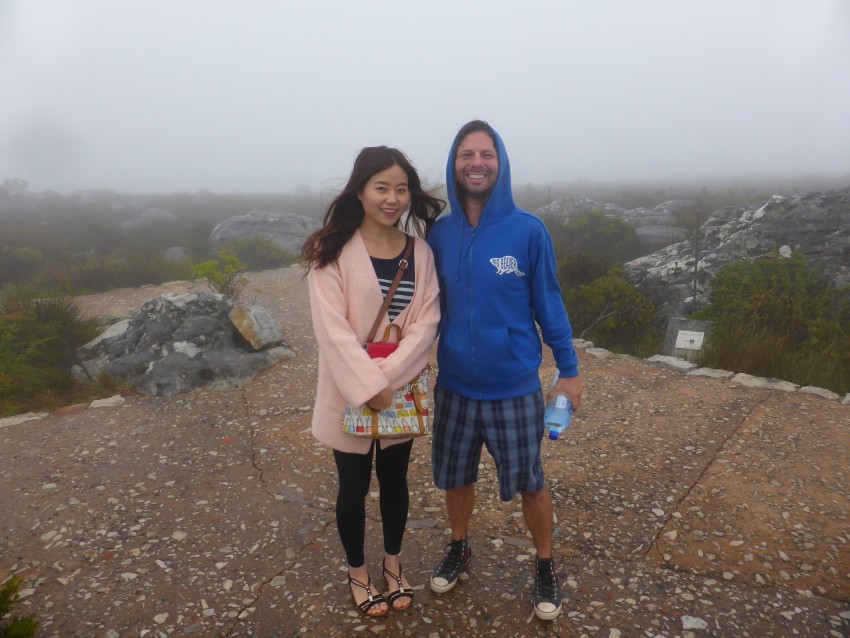 Well, you are awesome and cool!

I was enamored by Sumi and walked around with this beautiful creature in the rain and zero visibility on top of Table Mountain.  I asked her to come and see me in London.  Sumi, if you are reading this, I would really like to hear from you so I hope you write me! 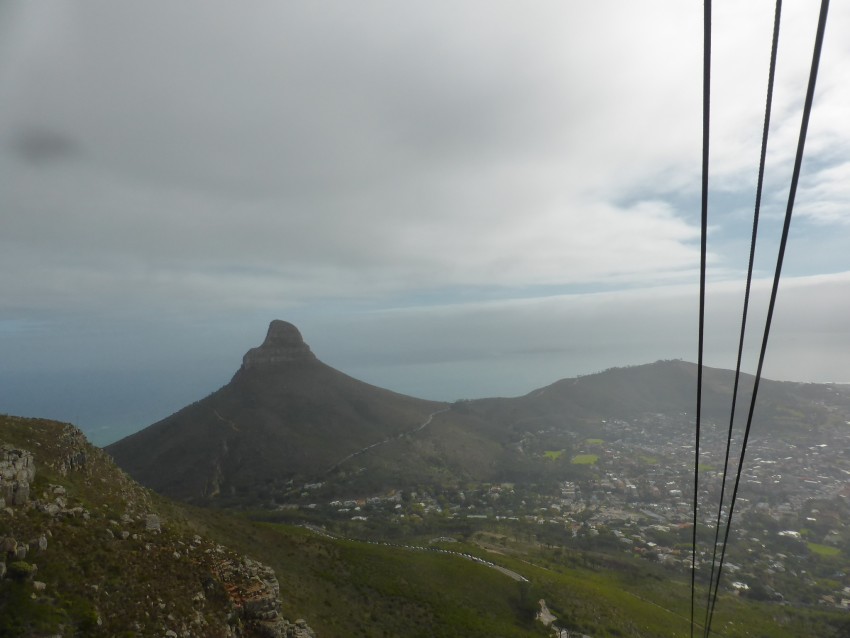 By the time I cable-carred back down the mountain, Dani was there to pick me up.  I had taken longer on top that I had planned due to the distraction.  When Dani asked me what I had seen on the top I told her, “Mostly a girls’ eyes.”

We drove to a restaurant to meet friends of Dani who where there with five year old Ethan who I had met earlier at his birthday party.  Dani said, “He is pretty cool.  He does not like to share his food, but he did let me dip his chips into his Fanta with him.  He seemed to accept me better after that.”  Kids are ridiculous! 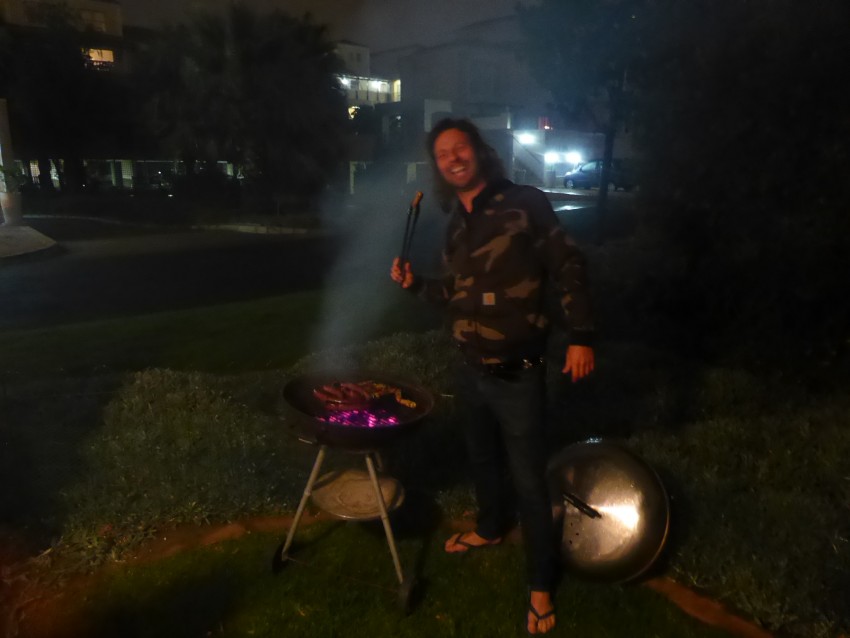 Rainbow Nation is a term in South Africa.  It is how South Africa perceives itself as a country with people of all colors.  That is really nice!
Beer and snack time at a restaurant, and then Dani’s friends invited us to their house for a Braai (South Africa barbeque) for the afternoon.  Security is crazy in South Africa.  A lot of people live behind walls with electric fences ticking around the tops of the walls.  That is life in this country.  The house Dani and I went to was in a gated community where the guards took: photos of the license plate on the car, photos of the registration details on the windshield, and photos of Dani’s driver’s license.  Intense!  The homeowners, Ryan and Nicole, told us, “If you have a criminal record, they will not even let you in.”  So, choose upright friends in South Africa if you want them to ever see your house!  Or perhaps that is the trick…befriend anyone, and then keep them at an arms distance by telling them, “Yea, sorry you can not come over.  Security will not let you.”  It is sort of an escape!

There were six of us out on the back terrace of the house where we played Cards Against Humanity.  I realized that you really need to play that game with people who know you a little.  I knew that I did not stand a chance to win the game when I was not victorious in the round where someone played the question, ‘What turns me on?’ and I played a card that said, ‘A cooler full of organs.’  It was a really fun a really fun night though. 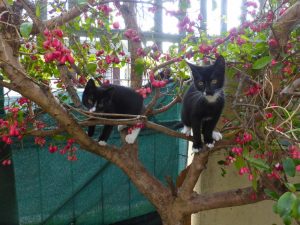 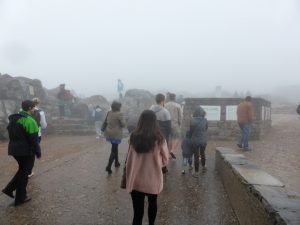 Yea, it is unpleasant up on top. Welcome to rain and mist! 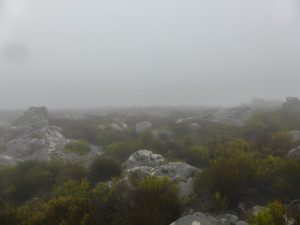 The topography on top of Table Mountain. 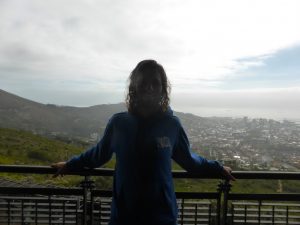 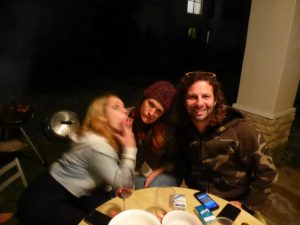 Donelle, Dani and I.

“She is taking care of a dog for her friend. Buddy is an older, small, dog. He was depressed and would not eat for the first two days with his family gone. He did not like her because she was some stranger in the house. Then I showed up at the door and he was excited to meet me. We became better pals than he and her were. Then Buddy figured out that I was there for her and not him. At that discovery, Buddy decided to like her and he stopped liking me so much. He started giving her non-stop attention and started ignoring me. Now Buddy and I are both after the same gal even though he did not even care about her until I showed up. But now he wants her too. It reminds me of a girl that I grew up knowing at home. I always had a crush on the her, but it seemed I was the only one who did. No one else was after her. Then a super cool guy decided that he liked the girl and started dating her. That verified her and then after they broke up everyone wanted her. Buddy the dog is 'everyone' too. Apparently that psychological pattern has no attachment to a specific species and is prone to crossing through them.”
— Male Psychology in all Species
[View All]