I slept a lot better last night as we approach the Salar de Uyuni Salt Falts.  I was not afraid I was going to die of altitude suffocation last night….

Actually, considering I was sharing a room with Roberta, I slept much better than I would have liked.  She reminds me so much of Fabiana in her mannerisms.  That mold of girl that comes out of the machine is just not sexually charged by me.  I had really hoped to write Fabiana a letter and describing what it is probably like to sleep with her based on Roberta…

We got up at 5am and we were on the road by 5:30am to the Salar de Uyuni Salt Falts.  The Salar de Uyuni Salt Falts look like snow covered Canada in the winter, but it is salt, and it is flat.  We drove 100km/h across it, making our own path on the salt.  After the sun came up we drove to an island in the middle of it covered in cactus, some of which were at least 10m tall.  Someone tried to make a fort out of salt blocks, much like we did as kids when we made snow forts.

I have a really hard time not being weird around girls who I am through with, who are through with me, or do not want from me what I want from them.  I try hard to be normal, but it is super difficult for me.  I seem to be most comfortable just ignoring them like they do not exist.  That seems to be my default.  But, that always makes things really ugly, and I would like to correct this.  But, it is such an easy pattern to fall into.  I found myself ignoring this girl in the truck today, and I stopped being so sweet and offering her things like water after every time I had some.  I felt her notice that.  Then I get worried that she is going to think that all of that nice guy business I had been about for the past two days was just an act to get into her pants, when I really am a genuinely nice person.  But by then, I have started ignoring her, and, well, at that point she certainly does not regret her decision at all and thanks her lucky stars that she did not get into something that now seems very ugly.  I do not mean to be so cold, it is just how I am.  And now I have to consciously be a good person and be interactive with someone who I do not want to be interactive with because she has no interest in me.  Life…  I was going through those thoughts sitting in the back of the truck beside Roberta.

We drove out of the Salar de Uyuni Salt Falts and we could see the mirage of the hills in the middle of them reflecting.  I made Johnny stop the truck so that I could climb a massive water tower that turned out to be a way bigger task than I could have ever imagined.  That sucker was high and it was scary to be climbing a super tall Bolivian made ladder on a Bolivian structure, especially since the previous water tower was collapsed on the ground next to the one I climbed.  I was shitting my pants, but team Sweden consists of two boys and two girls and Roberta as well who were all watching me.  I could not let up, so I climbed the shit out of that tower and took some pictures with shaky legs.

We got to Uyuni and jumped on a bus heading to Potosi, a gorgeous bus ride where the mountains and valleys are magnificent colors and shades or awesome.  The rocks and hills are marbled in places.  It is so nice.  We found a hostel in Potosi where Roberta and I are sharing a double room.  It is a much less than desirable position to be in, especially since I have been hanging around with everyone except for her since we got here.  But, here we are.  And so that makes tonight really suck, as I sure wish I was sleeping anywhere else.

*For more on the Salar de Uyuni Salt Flats, click: 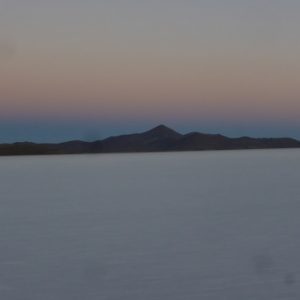 Welcome to the salt flats of Uyuni. The Salar de Uyuni is one of the most amazing things I have ever seen… 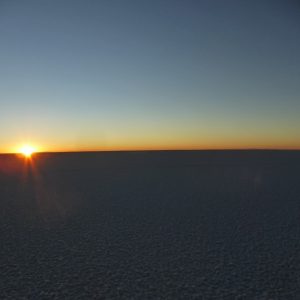 My crew wanted to get up at 5am to watch the sunrise. I was not too fussed, but I had to be a good sport. I think the sunset in the same place would have been fine. Salar de Uyuni 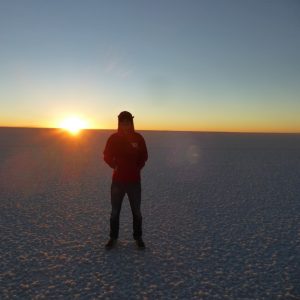 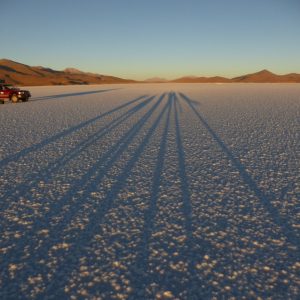 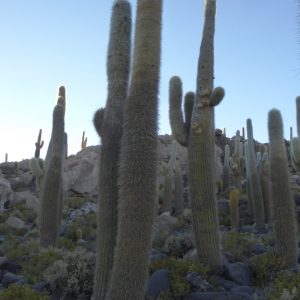 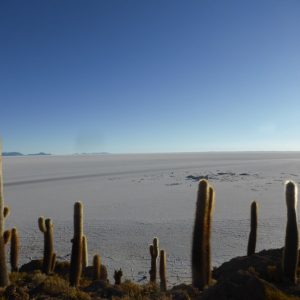 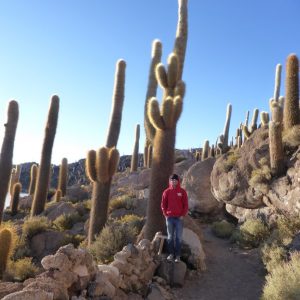 How big are those cacti? This freaking big! Salar de Uyuni 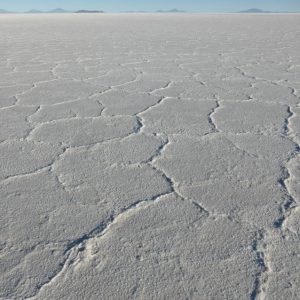 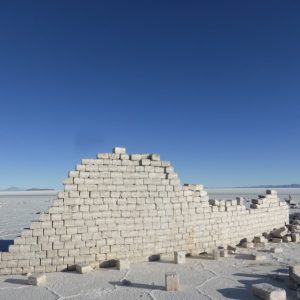 Someone decided to build a salt fort. I think a salt ball in the eye would be one of those that our moms warned us about. Salar de Uyuni 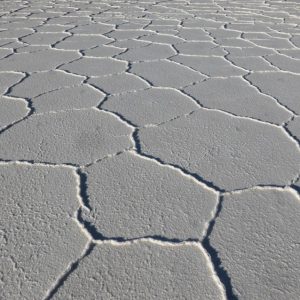 I just can not wrap my mind around these honeycomb salt flats. It is like this for about 80 kms by 80 kms. Salar de Uyuni 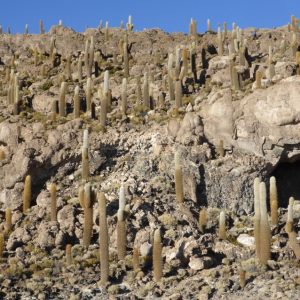 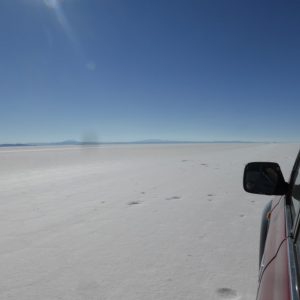 Roads in Bolivia. We drove this sucker at about 100km/h. Salar de Uyuni 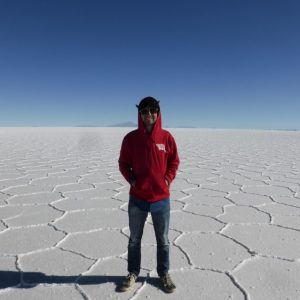 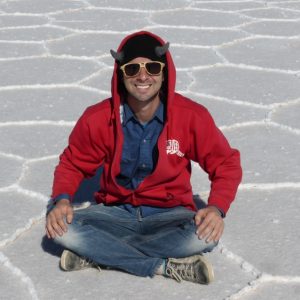 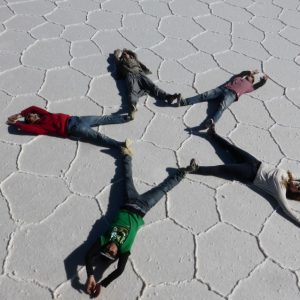 My favorite picture of the day. Salar de Uyuni 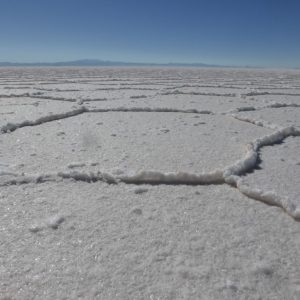 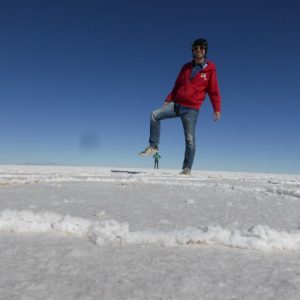 That is my friend Mike. I didn’t. He is too good of a guy. 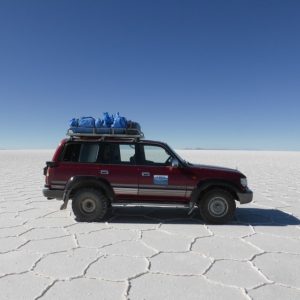 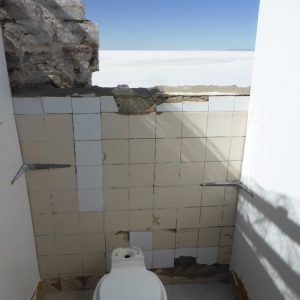 I just found this to be a fascinating toilet. Salar de Uyuni 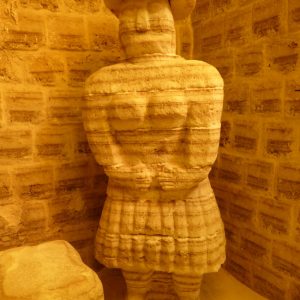 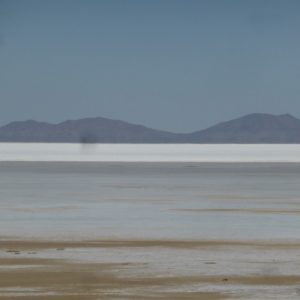 I made our driver stop the truck so that I could climb a massive water tower that turned out to be a way bigger task than I could have ever imagined. Just getting to it with my terrible altitude lungs was nearly enough to do me in. Then, that sucker was high and it was scary to be climbing a super tall Bolivian made ladder on a Bolivian structure, especially since the previous water tower was collapsed on the ground next to the one I climbed. I was shitting my pants, but team Sweden consists of two boys and two girls and another girl as well who were all watching me. I could not let up, so I climbed the shit out of that tower and took some pictures with shaky legs. Salar de Uyuni 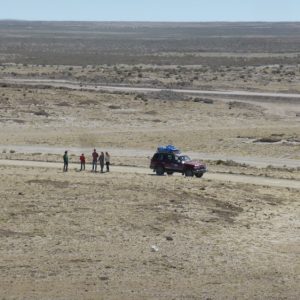 The crew below. Salar de Uyuni 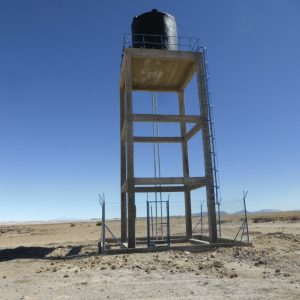 The tower. It may not look tall, but believe me, this sonofagun was huge. That is a 3 meter fence around it. Salar de Uyuni 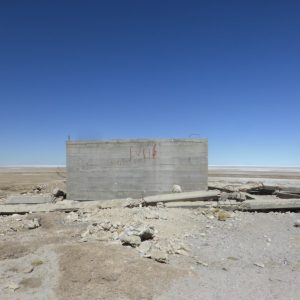 There is the collapsed previous tower right next to it to make me feel secure. Salar de Uyuni 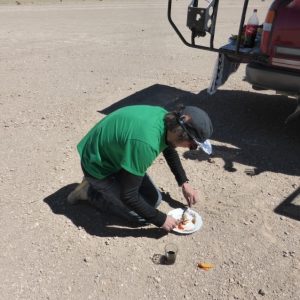 Eating on the dirt on the go. Salar de Uyuni 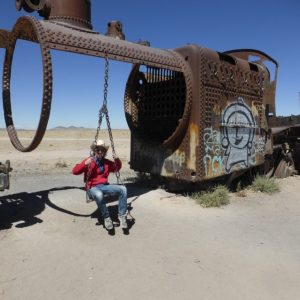 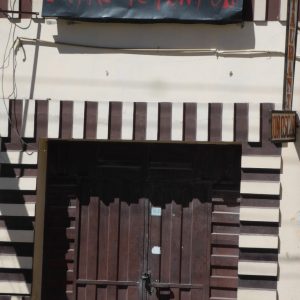 It was closed, but I was sure it would have been the best day ever in the history of time! Uyuni 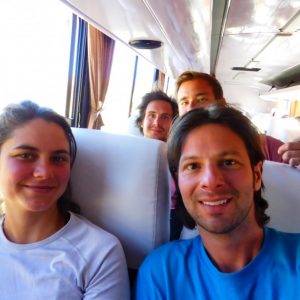