After a late start because of a little lady’s illness last night, Travis and I left Penhold and went to Red Deer to buy diapers and beer.  That is quite a combination.  I tried carrying the diapers and felt that it was bad luck so I had Travis carry them instead.  Some things just do not look right on me.  Perhaps one day I will have to buy diapers.  Maybe for a child.  Maybe my own.  I will carry them then.  Not before.

Canada has painted-lined spaces between parking spaces.  That is how you know Canada has a lot of room and not a lot of people.  In Korea you get out of your car and it is elevatored on a small platform and remote control placed in an unmanned storage space which is the actual parking lot.  In Canada lines are on the pavement to make sure no one parks too closely to anyone which might make it uncomfortable to get in and out of their cars.

It was time to head to the school in Penhold to get there in time for the end of the kindergarten day to pick up Travis and Nicole’s little boy, Kellen.  Now that was a pretty interesting experience.  Travis and I were standing in front of the school door with all of the other parents.  It is just so strange because it does not seem like that long ago since Travis and I were in school, and now we are at the school to pick up a smaller version of his DNA.  For me it is a shot of what life is really like.  Travis says it is even feels strange for him.  There were a lot of circular shaped mom’s standing around waiting for their children to come out the door.  When did it become more common for a mother to look like a ‘O’ than an ‘I’?  An ‘I’ shape mom seems to be an outsider.  Scary.

Upon further thought, maybe the parking space spaces are so that some of the people are able to actually to the doors of their cars?

Kellen wanted to play on the playground before we went home.  Travis followed Kellen, smiled at me and said, “We might have to pretend to be pirates or something here…”  Imagination is so strong in children.  It makes me jealous.  The things they see…  When we came back to Travis and Nicole’s house I played with Kellen.  In Kellen’s imagination we were exploring a haunted house where we could have pepperoni hamburgers served to us.  It is awesome how children can take themselves on a mental adventure like that.  Are sci-fi writes more connected to their childhood imagination than the minds of the mass population?

I am really not used to being around children.  They are really involved in what they are doing.  After I took a massive red car off the side of the face, Nicole, Travis, and I visited for an hour or so after dinner about life and then Travis and I played guitars and tried ripping through ‘Killing in the Name of.’  Drinking beer and playing guitars with a person who has been so important in my life for about 25 years is very special.  Thanks buddy.  Penhold has been great! 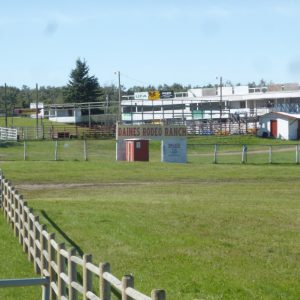 How a ranch looks in Alberta which is so prestigious that they have an arena for the professional rodeo they host. 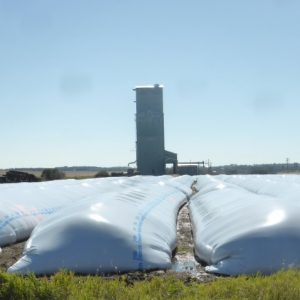 Wheat storage outside of an Alberta elevator. 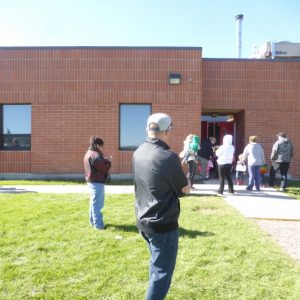 Travis, waiting outside the school for Kellen.

“I went to try to find out about the ferry that leaves town tomorrow.  When I got to the ticket office of the building, there was not a person to be found anywhere.  I walked back out and found a uniformed security guard who was about my age.  As I was walking towards him, he was making eye contact, ready to try and decipher what I might want.  Once I was close, I asked him, “Do you speak a little bit of English?”  He replied in very broken English, “I heard speaking sometimes…”  I laughed so hard at what he had said that he was laughing at me laughing at him.  It was awesome!  He was not kidding about himself.  That was basically the extent of his English, but he knew how funny it was that he had said that to me.”
— My new Tanzanian friend, Wanja
[View All]