I had just about the worst sleep of my night last night in the Salar de Uyuni Atacama Desert.  I went through hell and anxiety.  My lungs hurt so much, that I can only take short breaths and I feel like I am suffocating.  Because my lungs hurt so much, I could only lay on my back, but I can not sleep on my back, so everything was just terrible.  And then an idle mind goes through terror, and I as having minor anxiety attacks about my breathing and I worried about my heart beating so fast.  I was thinking about doctors and how I was so far away from anything in the middle of the desert in Bolivia, that there was nothing I could do so I just had to deal with the situation…!

I do not usually react to things like that.  But, I had to do all I could to keep myself in check so that I did not totally freak out and wake up my roommates who were sure to think I was a psycho.  It is so strange to not be able to control your body.  So, I just laid there and tried to control my breathing with thinking about other things and try to fall asleep.  I laid in terror for about 3 hours until I slept a bit, and then I was awake for a couple of hours, just tossing and trying to get comfortable, and then I slept some more.

As I was laying there, I could hear everyone else sleeping around me.  Roberta was talking in her sleep and she said in English, “Uh, I am sleeping alone…” which I was not sure if it was because she was sad, or because in her dream, an English speaker was trying to get into bed with her, which was my goal….  An intuition dream?  So, I kept a bit of distance from her for the first part of the day through the Salar de Uyuni Atacama Desert after we got up.  …Precautionary measures!

Sharing a bathroom when everyone is in a rush for their tour is something I may not forget for a while.  Brushing your teeth at 7am, when a woman on the tour, a beautiful Brazilian, comes in to the toilet and you get to hear her fart and shit, was something that will probably not slip my mind for a while.  She is still attractive, but something is tainted when you hear a girl you are attracted to, but barely know, shitting and farting…

I was sick for about half of the day through the Salar de Uyuni Atacama Desert.  I kind of pulled out of it, but I just do not have any breath.  As soon as I try to climb something, I get to the top and 80 year old Beaver tries to catch his breath.  It is a look at the future and that shit is scary.

We saw a lot of wildlife today in the Salar de Uyuni Atacama Desert.  There were a lot of wild lamas, three ostriches, and we fed a rabbit with a tail as long as a dog.  Weird.  We have also seen so many pink flamingos and stopped at so many lagoons to look at them that I am flamingo-ed out in the Salar de Uyuni Atacama Desert.

Roberta’s grandfathers grandfather was an Italian.  She can get a passport because of that.  Fuck!  If England was only like that my life would be a lot better…

At 5pm we arrived at our hostel made out of salt.  It is wild.  You can lick the walls.  As we were walking in, Johnny, our Bolivian 4WD driver directed us to our rooms, two by two.  He put Roberta and I in the same rooms, smiled at me and said, “Cheeka…”  I had hopes that it was the best wing-man move ever.

We showered with lukecold water and had dinner which was a meat that no one recognized, but everyone ate it anyhow.  I taught Roberta and Team Sweden how to play Asshole and we drank three bottles of wine.  A French girl who was standing around told us that they play the same game in France that the name of the game is a direct French translation of the word ‘Asshole.’  Interesting.  I suggested it could just be called ‘Frenchman!’

Everyone went to bed at about 9pm because someone in our crew thought we should watch the sunrise from the salt flats.  I was not interested in getting up at 5am, but sometimes you have to play the game.  So, Roberta and I went to our room.  I sat on her bed and we were kind of touchy, but when I went to kiss her she pulled away.  Shame.  I stayed totally cool and went to my own bed.  I made sure to not get weird.  Girls….

*For more on the Salar de Uyuni Atacama Desert, click: 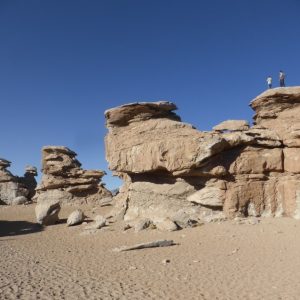 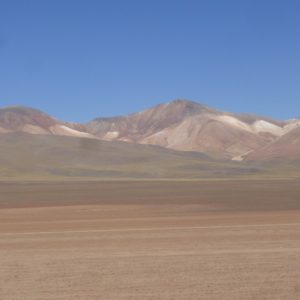 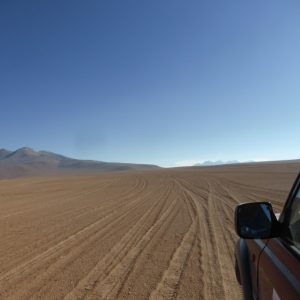 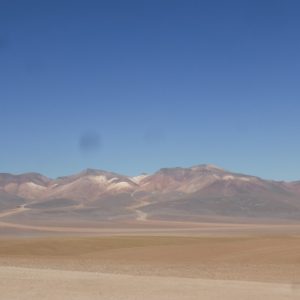 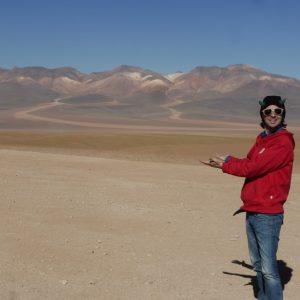 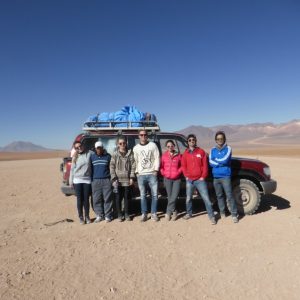 My crew. Our three day desert trek SUV. A Canadian, an Argentinean, and Team Sweden. 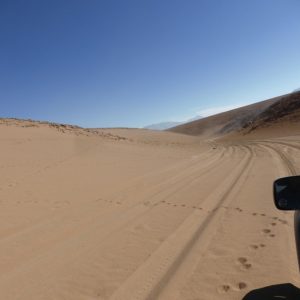 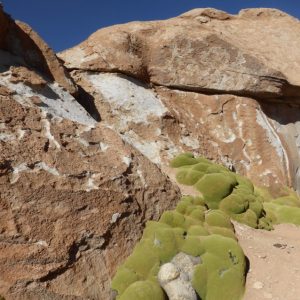 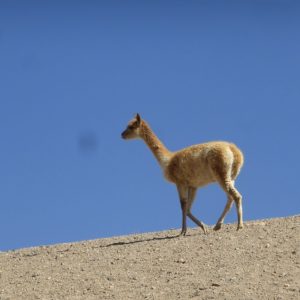 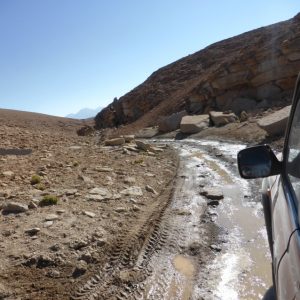 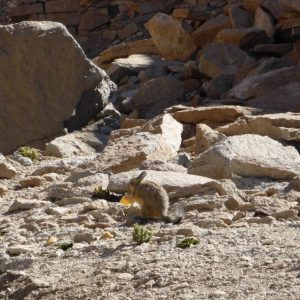 Look at the tail on that rabbit. It freaks me out… 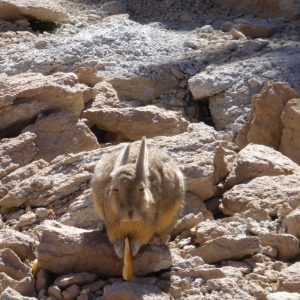 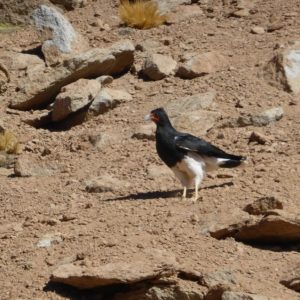 This guy is cool. 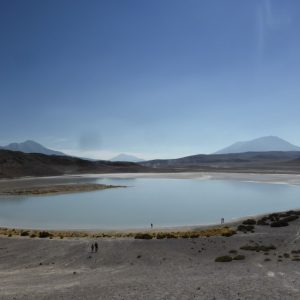 There are lagoons everywhere. 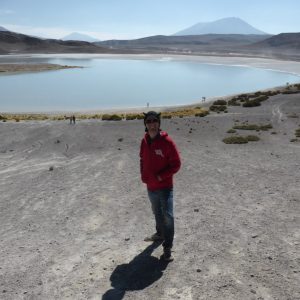 More lamas. They are everywhere. 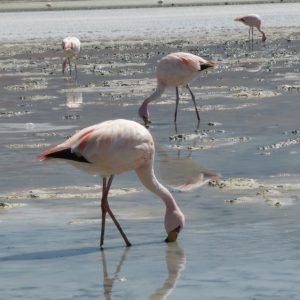 Pink flamingos. I have seen a lot of these things in the past couple of days. 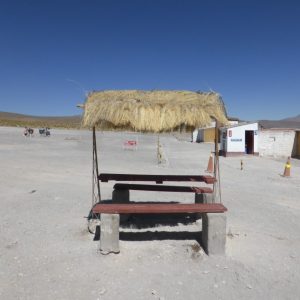 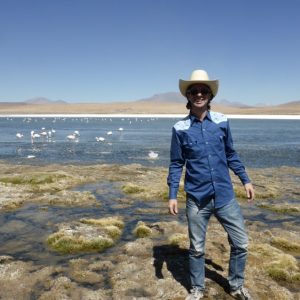 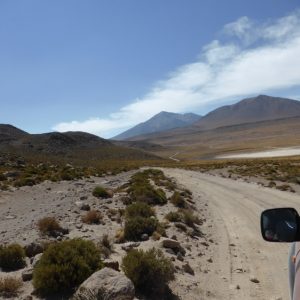 Roads in Bolivia. That sucker just keeps on going and going. 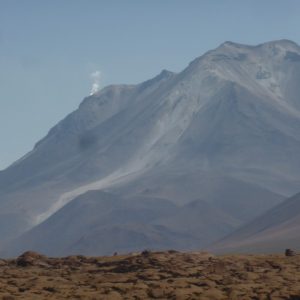 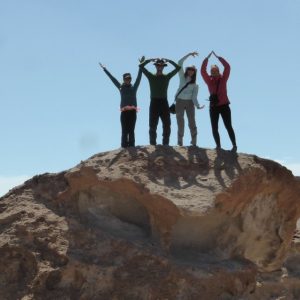 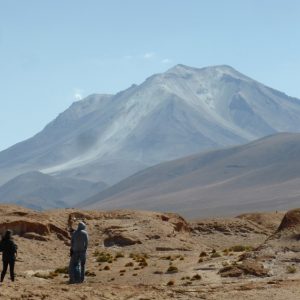 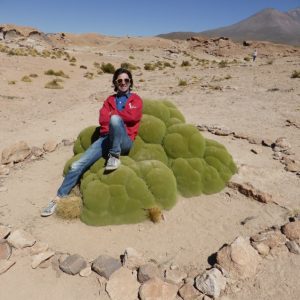 It ain’t easy being green. 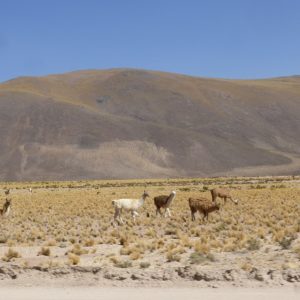 Wild lamas. I seem to have taken a lot of pictures of those… 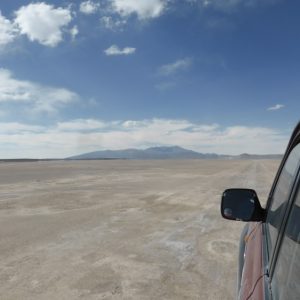 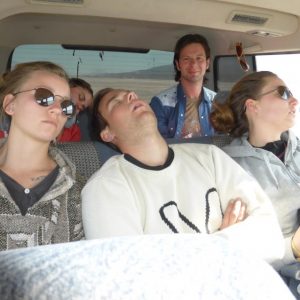 It appears to have been a long day for Team Sweden. 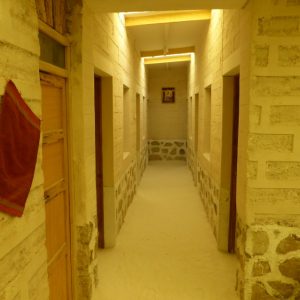 Our hotel for the evening. Made of salt.

Salt hotel. You could lick the walls for a heart attack. 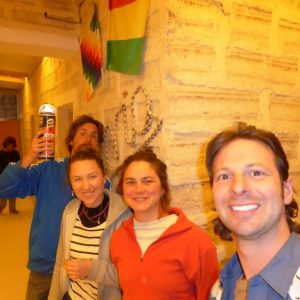 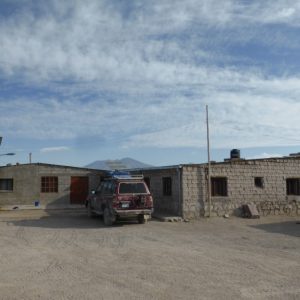 “Fatty came out of the toilet and the seat was down: Me - “Do you pee sitting down?” Fatty - “No, I always pee with the seat down. I never hit the seat.” Me - “Wow, you must have good aim. I must be dealing with a bigger hose here.” Fatty - “That or you have a sloppy hole.””
— Fatty
[View All]