Nairobi Mardi Gras.
Feb 27
I started the day by making a fake plane ticket that will fly from Lusaka, Zambia to Johannesburg, South Africa on March 10th.  Tanzania is in my way heading south and I cannot go around it because I cannot get into Congo.  So, the only way to get to Zambia is to pass through Tanzania.

A regular visa is $50, which I bought last time, but a transit visa (good for 14 days) is only $30.  I might as well save myself $20, but the thing is that they will ask for proof of onward travel at the Tanzania border to get the transit visa.  Hence, the fake onward flight ticket to prove that I am really just going to pass through Tanzania… 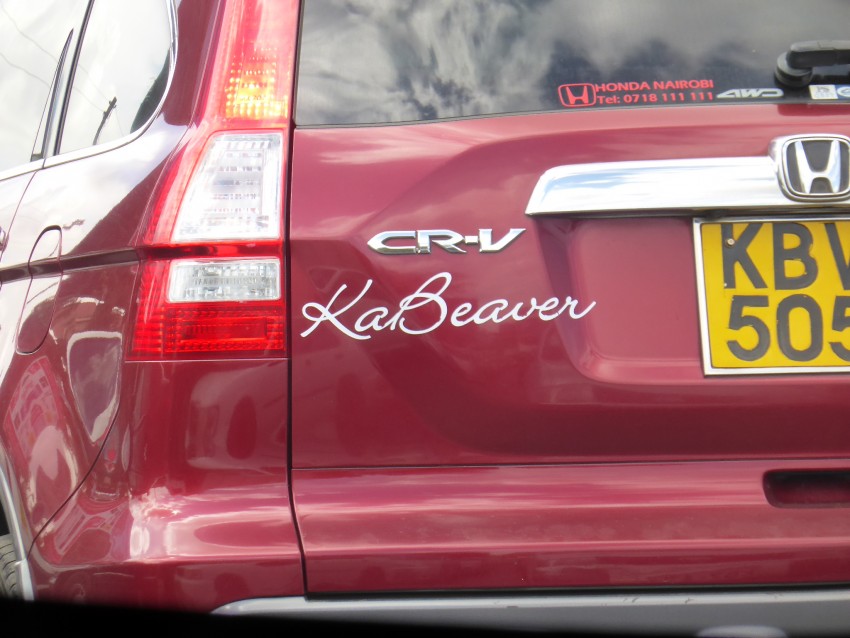 Ulrika, Steve and I started our day off in the Central Business District of Nairobi for pizza.  I have been craving western foods.  I guess that is probably normal when you are around things that you cannot really find anywhere else… You want them again.

After eating, Ulrika went for coffee while Steve and I went to a store to buy beer and wine for a party we were going to later.  As I was buying a six pack of Tusker beer, a local man next to us at the counter told me, “Ah, Tusker is good.  Last night I drink 12.  I was like a banana after.  Wife says can’t do again.”

I was laughing and as he walked away he said, “Thanks for being Tusker-boy.”  Ah, people are so great…

Nairobi is a pretty clean city.  Before I came, I had heard nothing but negativity about the city. I would not have visited the place had my friend Ulrika not lived here.  People said it is crowded, has a lot of crime and is dangerous… There are children beggars downtown and there are preachers yelling at crowds with bibles in their hands, but Nairobi feels quite comfortable. The safety issue is no different than anywhere else I have been in Africa.

But the best thing about Nairobi is the connection to Steve and Ulrika.  Steve is local, so he really knows how to get around, and he can keep the beggars at bay with his language.  Touts do not even approach me.  It is nice.  And, it is a real treat for me to not have to think about anything.  I do not have to plan, I do not have to figure anything out, I do not have to wonder if I am paying too much…  It is like having a life guide.  And not carrying anything with me because it is all at Steve’s house…no bag, no money belt, nothing…it is like taking a holiday! 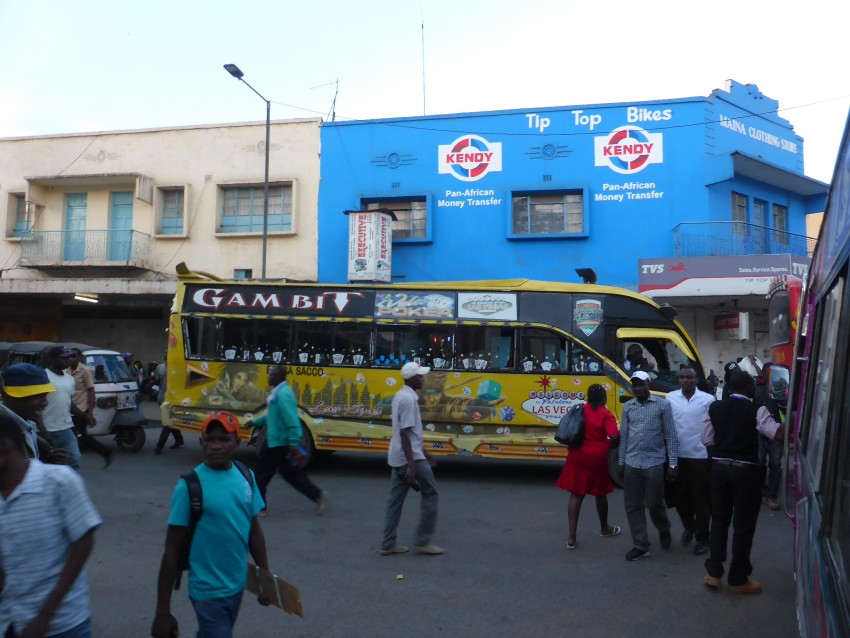 Steve took us to a party in the neighborhood where he grew up.  On the way, the matatu we were in was a typical matatu public transportation bus, but we had to stop at a fuel station for about 15 minutes so that the driver could put air in the front tires.  Ah, typical Africa.  It was a feast, with plenty of beer, and many of Steve’s friends that he grew up with in the area of Nairobi. 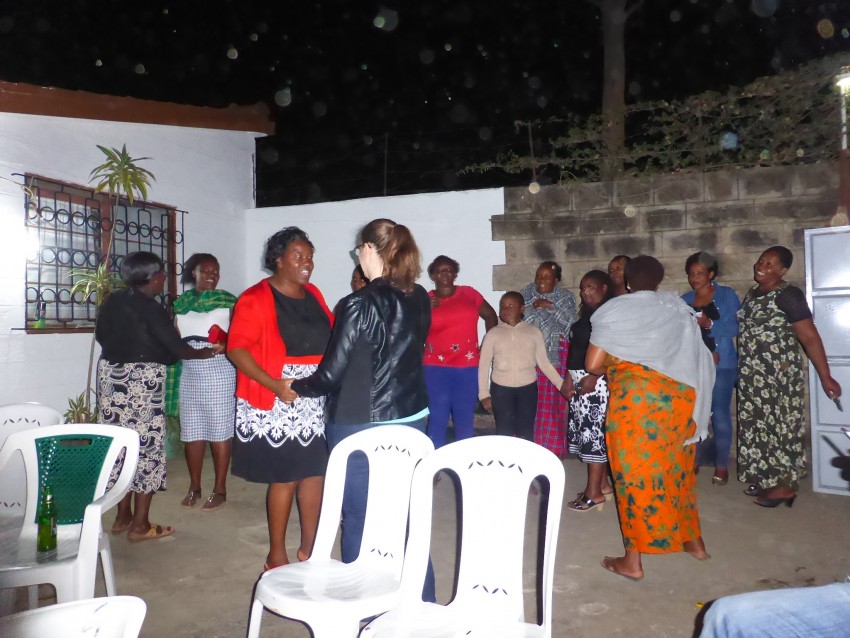 Ladies singing and dancing to welcome a new bride to the community.

The party we arrived at was for Steve’s friend, who recently got married.  It was a gathering for all of his family and friends.  We talked about weather where Ulrika (Swedish) and I come from.  They locals said that in July of 1997, the temperature in Nairobi dropped to 5⁰ Celsius.  They said that life stopped in Nairobi.  People still went to work, but they were wrapped in blankets covering jackets.  It was clear that the temperature was so cold for them that they remembered the exact date.

I got to try “motura”, which is a traditional Kenyan version of blood-sausage where the ground meat is inside of intestines.  It was very tasty.
Ulrika, Steve and I caught a taxi to a party called Nairobi Mardi Gras in an area of the city called Kiambu.  It was $20 to get into the party, which was part carnival, part fair and part music festival.  I was really glad to be there as live music was playing, something I have not been able to watch in a very long time.  There were men dancing on crazy stilts and acrobats on the grass dance floor in front of the stage where the music was playing. 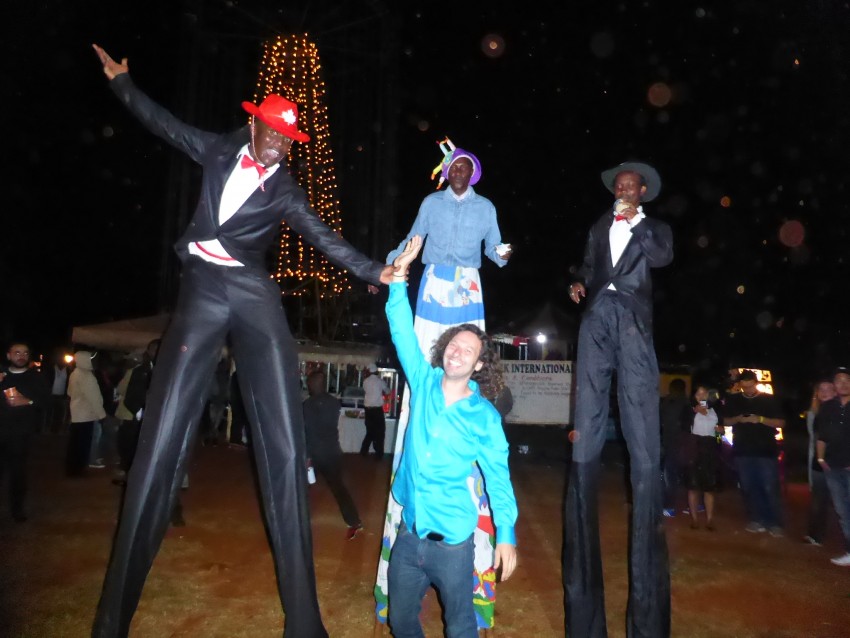 Just beyond the stage, a swing-ride that I had been terrified to even look at when I was in Uganda was running. It looked like a lot of fun which it turned out to be.  The rickety wooden stairs getting up to the ride were actually the most frightening part of the ride itself. 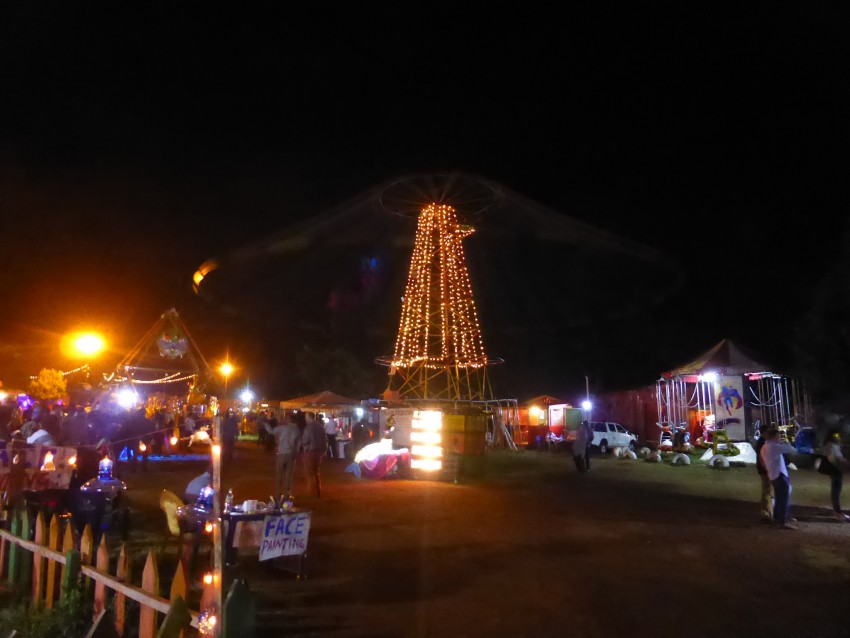 There was also an old Ferris wheel, but the bumper cars were the best part.  People in the cars, having a great time, but the electricity kept on cutting out.  So, people would smash into each other and then the power would cut and the cars would stop.  In the immediate stillness, everyone would talk trash to everyone around them about what they were going to do to each other when the electricity came back.

People would take off and hit each other in the bumper cars to back up their words, then the electricity would stop again, and everything would stop moving.

It was very entertaining… 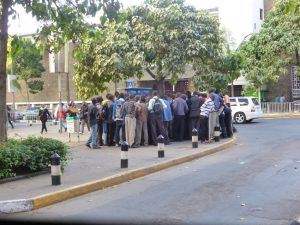 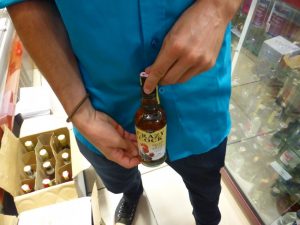 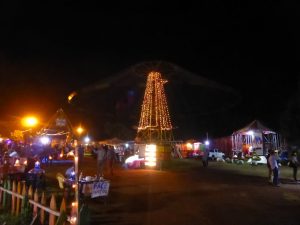 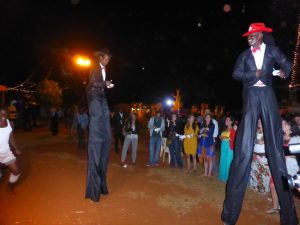 Tall! These guys were dancing. 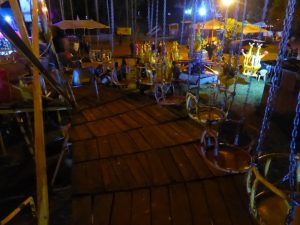 Rickity planks to get onto the swing ride. Getting to the swings was more frightening than the ride. 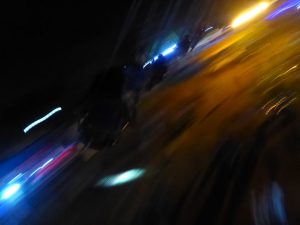 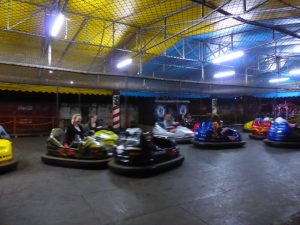 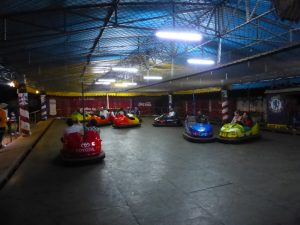 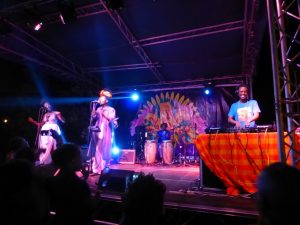 Live music. The DJ loves his part of the job!

“You know you are getting close to home through your hitchhike when you start to know everyone. A friend travelling the opposite direction drove past me. I did not see him but he backed up to talk to me. He said, “I am heading to my mom’s for supper. If you can get to my house, the fridge is full of cold beer. You can just stay there. Or else you can just take my Dodge home and bring it back tomorrow.” How to tell when you are in your own local countryside!”
— Bengough, Saskatchewan.
[View All]