Nairobi to Arusha: Blagging Immigration.
Feb 28
So I realize that it is a leap year and that means tomorrow is a fancy day. I feel like I need an explanation as to why some months have 30 days and some have 31. What is the reason that February normally only has 28 for ¾ of the time?  Who came up with this nonsensical number system…and now that I think about it, why 24 hours?  Why did they not base it in a 10-scale and lengthen the seconds…?

Ulrika, Steve and I caught a local taxi into the center of Nairobi at lunch time so that I could figure out how to get myself to Arusha, Tanzania, to get across to Zambia.  The buses were leaving only at 13:30 and at 14:00.  There were about six buses leaving at the same time.  I am not sure why one bus is not leaving at 10:00, the next at 11:00 and so on.  Instead it is a convoy of buses leaving half full at the same time.  Sometimes, I feel like I need to sit down and have a meeting with people about productivity and numbers… 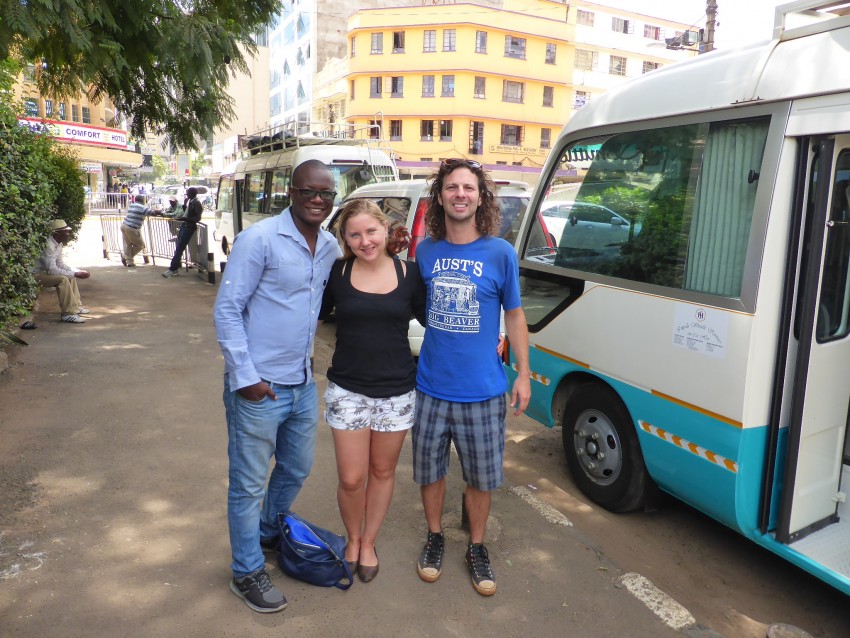 Steve, Ulrika and I.

After killing some time with lunch, I said goodbye to Ulrika and Steve and waited a half hour for the bus to leave.  The guy running the bus sat to chat with me.  He was talking about a camping trip he takes care of and told me, “You can cook or we can cook you.”  I told him it did not sound like a good time unless he had missed the word “for”.  He did not know what I meant so I explained the sentences “We can cook you” and “We can cook for you” to him.  He got so embarrassed.  It was fantastic! 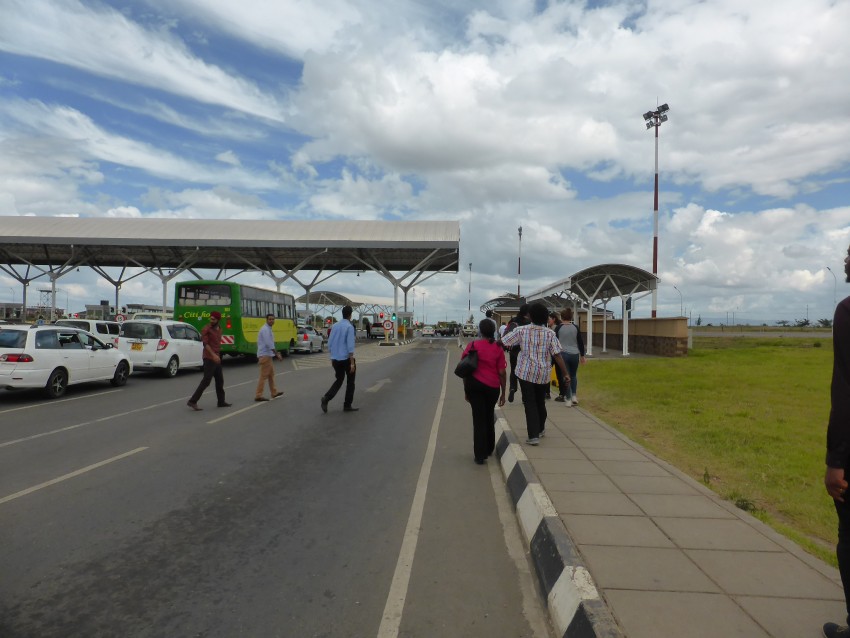 At a security check-point along a Kenyan highway.

The bus finally got going.  Just as we left Nairobi, the bus pulled into a patrolled area that resembled something between a toll area and a border control station.  When the bus stopped, everyone had to get off and walk into a building.  It was just a security check, which the Kenyans love.  Our entire bus unloaded so that we could walk into a building, to walk through a metal detector, were patted-down, and then went out the other side of the building to get back on the bus.  That is the future of the world my friends.  The future sucks…

The bus I was on was a Nairobi to Arusha tourist bus.  Had I been aware of that initially, I would have found another way, but I did not know until it was too late.  It was a bus for muzoongoes and for rich local travelers.  The bus made a stop for a bathroom break at a building full of wooden carvings of giraffes, elephants and hippos.  To get to the toilet, we had to walk through the mess of trinkets, much like a museum finishes in the gift-shop…  Someone gets a kick-back for taking us there. 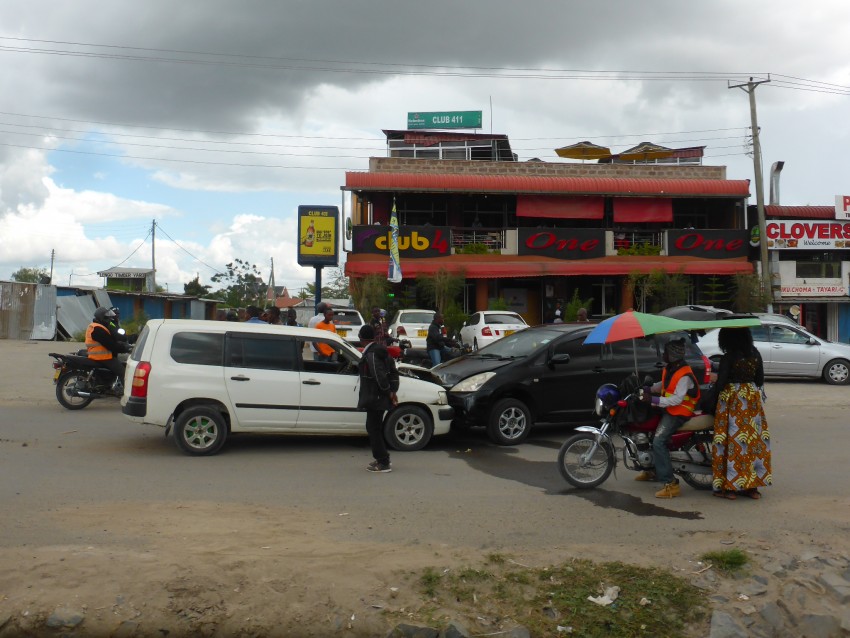 How did this happen? Both guys were playing chicken and no one was backing down?

We got to the border and I had to get an exit stamp from the Kenyan border.  I handed my opened passport to the immigration officer with the page exposed where I obviously wanted him to stamp the page.  He did just that and never bothered to even look at the passport, look at the information section and photo to be certain it was me.  He just took the passport, hammered it with the stamp and handed it back to me.  I have never ever had that happen before.  I walked to the Tanzanian border building…

The first thing I had to do was show immigration my medical booklet to show that I have yellow-fever vaccinations.  Then, I had to fill out a form about the visa I wanted.  I just wanted a transit visa for $30 instead of the regular visa for $50.  I had my fake plane ticket ready to show immigration. I also had my old and obsolete $100 US note from 1999 that they no longer take in my hand.  I was sort of pushing my luck hard today, but I was ready to be confident that my plane ticket was legitimate and that my $100 was very spendable….

Unbelievably, and perhaps due to my over-friendliness, the man did not question my desire for a transit visa. He issued it to me with no questions for 14-days and he took my obsolete $100 for the transaction.  No questions.  No issues.  No situation.  The ducks all lined up.  Nice!

I was the last guy on the bus and we headed into Tanzania towards Arusha and the Nairobi to Arusha leg.  Tanzania feels very familiar.  The lay of the land sort of feels homey as I’ve gotten used to it from being in this country for so long.  The side of the road, the mountains and the vegetation look like something I have known for most of my life.  It is strange as I can remember when I first took photos of how strange and fresh the land looked after I left Zanzibar, and now it feels a little like home when I return.

The north of Tanzania against Kenya is a beautiful range of land.  I think it is the most beautiful part of Africa that I have seen on this trip so far.  The world outside of the bus windows looks like it is a part of a safari…

We arrived in Arusha six hours from when we left Nairobi and the tourist bus made a final stop at an exotic hotel that probably costs the same a night as I am spending in 10 days.  I had to catch a motorcycle taxi for 3 kilometer in the center of the city.  I found a place called the “Amazon Hotel” and scored a room for $10 a night.  It is not nice, but what does a man need to spend an extra $90 a night on carpeted floors for…! 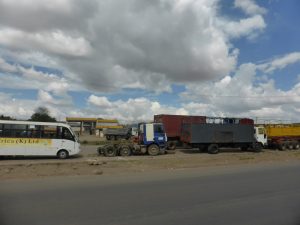 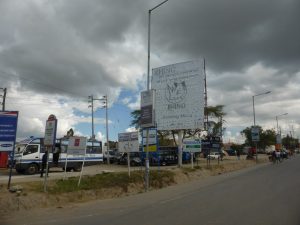 There are a crazy and distracting amount of signs here.

“As we were walking past, a man with a motorcycle pointed to his bike and said, “Photo?”  Umm, I think you mean “Moto” my friend.  It was funny.”
— Tanzanian English
[View All]