Nakuru: Juliette Meets Romeo.
Feb 25
I accidentally hitchhiked from the Korando Education Center back into Kisumu.  I was just standing on the side of the road waiting for a bus when a man pulled up and gave me a ride into town. He left me at a Kisumu bus station at a mall where I waited for an hour for a bus to haul me to Nakuru.

There are some major differences in Kenya to everywhere else I have been in Africa.  For one, Kenyan women are gorgeous and they are generally much thinner than Tanzania, Uganda, and Rwanda.  And they have nicer hair.  The supermarkets here in Kenya are really nice and great in terms of quality compared to Copenhagen… 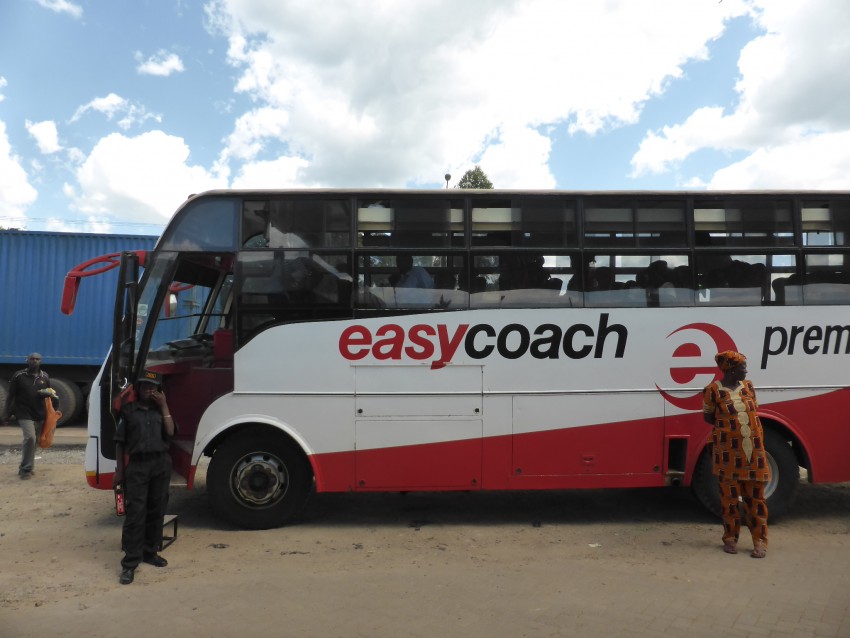 Metal detectors are everywhere in Kenya. Here is one just to get on the bus.

I got on a bus for about four hours for about $8 (I love how the Kenyans call their money “bob” as slang.  ‘That will be 800 bob!’)  When the bus arrived I went into the station to ask where to stay for the night.  A man behind the counter called another man named Allen. Allen arrived in cover-alls and walked me to a place called the Village Park Resort where Johnston rented me a room for $8.  Allen waited for me the whole time to make sure I liked the room, and I appreciated his help so much that I offered to take him out for a beer after he finished his shift 45 minutes later. 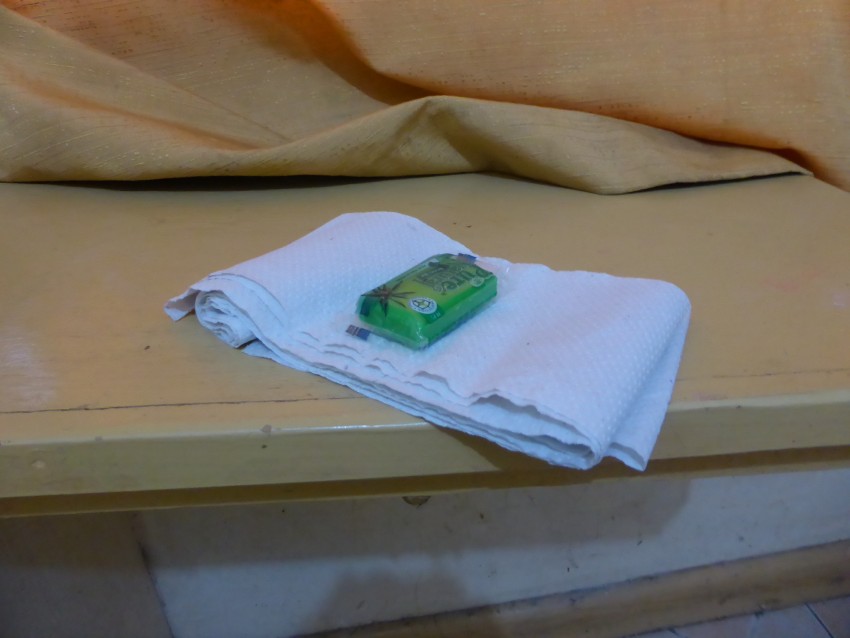 My hotel. Not flashy. Here is my alloted supply of toilet paper for my stay.

Allen and I walked to a small bar and drank Kenyan beer.  His phone kept on ringing and he kept on answering.  I asked him if his wife was wondering when he was going to be home.  He was surprised at this question and asked me if I understand Swahili.  I told him no, but sometimes I know some things about women…

Allen was missing the tips of both of his index fingers.  I asked him what happened.  One he chopped off with a machete when he was about 9 years of age.  He told me it happened as he was chopping wood.  He did not feel it at all.  The other was from when he was too young to remember, but he smashed it into a tree root when he was running and lost the tip.  That is a pretty unlucky index run before he even reached double digits in age…  He told me, “Sometimes, just limbs want be free!”  I liked his attitude.

I asked Allen about his job.  He said he is a “loader/unloader” for the buses when they come into town.  He told me that the bus company transferred him to Nakuru nine years ago and he has been here ever since.  I asked him if he is happy here.  He said he has no choice but to be happy as he was transferred.  It was either move or move on and jobs are hard to come by.  That is a lot of control by a company for a very minimal job.  Life is pretty unfair here a lot of the time… 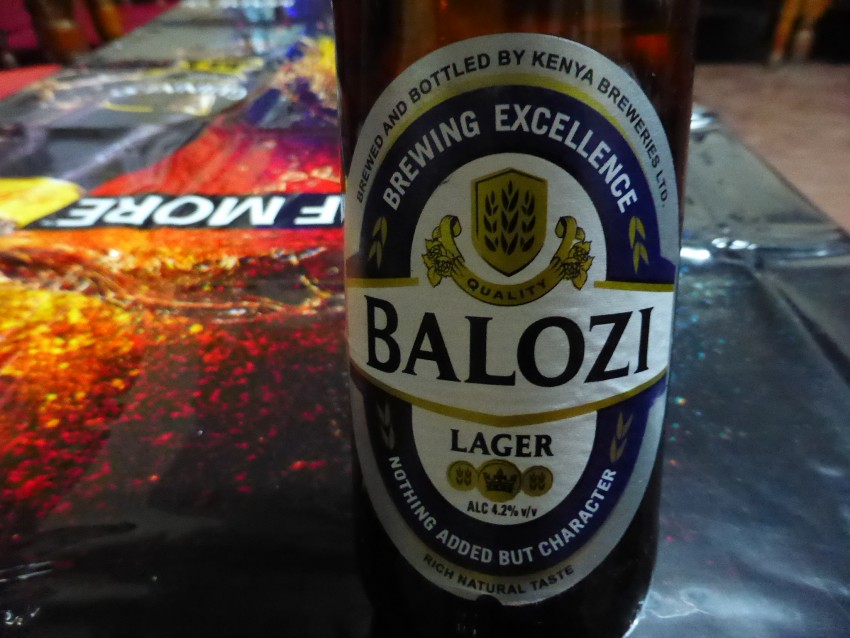 “Nothing Added But Character” – What a great beer slogan.

For dinner, I walked into town as Allen and Johnston had told me that it is safe to be out at night here in Nakuru, even as a mazoongo.  No one hassled me in town for business (my kind of town) as I walked around.  Awesome.   I found a second floor bar/restaurant with a terrace that overlooked the street below. I went in for some traditional dishes called “mokimo” (mashed maize and potato together) and “managu” which is leaves and vegetables.

I chased it down with a beer and introduced myself to the pretty girl sitting to my left.  She told me her name was Juliette.  I told her mine was Romeo.  Life is too easy sometimes…  She was amazed.  I could not lead her on and told her that I was actually Beaver.  Still fun, but not quite as much fun as it would have been to have been Romeo meeting Juliette…

Juliette sells Nivea products around town, which made certain that she had soft skin.  I inspected quite a lot of her with my hands to make sure.  It made her giggle.  We ended up chatting for about an hour and I felt bad for her friend, who was being ignored.  Her friend Unis decided to go home.  I asked her if I was allowed to keep Juliette.  She said I could not keep her, but that I could accompany her for the night.

Juliette is from the countryside east of Nairobi.  She said it is really dry land where she and her family lived as she grew up.  She said that at the age of 12, her grandmother would awaken her and four of her cousins at 03:00.  The five kids of similar approximate ages would have to walk 10 kilometers to fetch water for the family households.  They would all carry 10 liter jerry-cans.  Once they would arrive at the place of known water, they would dig holes in the sand.  From the hole they dug, they could expect three liters of water, and never more.  When they had collected all of that water, from that hole, they would find a place and dig another until they had collected 50L of water that they would then carry 10 kilometers home again and arrive at 15:00.  It was a 12 hour journey just to collect water.  But, the water was contaminated and once they got it home they had tablets that they would put inside of the water to make it consumable…  Incredible…

*Juliette told me that she can make banana beer from extremely ripe bananas (black ripe).  She said if you take four bananas and squeeze two lemons on them, and then run them through a blender, they ferment immediately and banana beer is created.  That seems suspect, but if anyone tries this, please let me know if it works…

My wonderful lady friend and I walked across the street to another bar and sat down.  We were kind of in the open and pretty touchy, which attracted a lot of eyes on us.  It did not bother me, but I was concerned about Juliette living here in Nakuru. Now every time someone sees her, they will remember her as the girl with the mazoongo.  But, she had no issues with the situation. 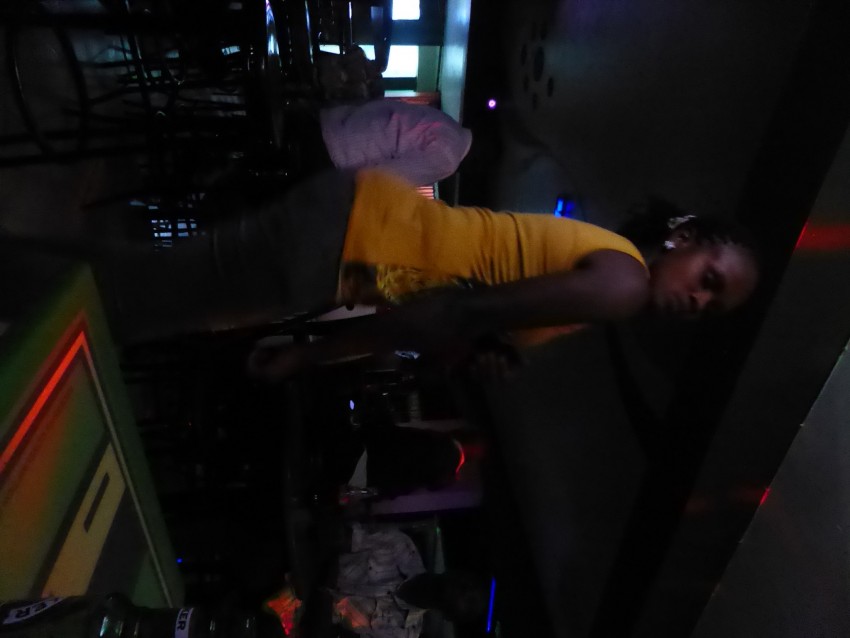 She wanted to dance and I never want to dance.  So, Juliette would get up from the table and dance in front of me.  That was nice.  Just after midnight we left the bar holding hands.  She told me that it was one of the best nights of her life.  Wow!  Thanks!  We were just getting started!

Once we arrived at my Nakuru hotel, I pushed Juliette on the bed.

It was on, but it turned out that it was not on…

It was that obstacle time of the month where nature was punishing her for not being pregnant.  So, her pants were not coming off like her shirt magically had.  That put a stop to things going as far as I wanted them to go, but such is life.  Nonetheless, it was a great night with a very pretty girl!

* Life is full of patterns…  A) In my life I have been with three different Marsha’s.  None of the Marsha’s would sleep with me.  They were up for anything and everything except for going all the way…  B) I have now went home with two different girls from Kenya in my life.  One was way back, just before I started university, and one was last night.  I got to the same place with both of them, stopping at the pants.  I am incapable of sleeping with a Marsha, and Kenyan girls do not let me take off their pants. 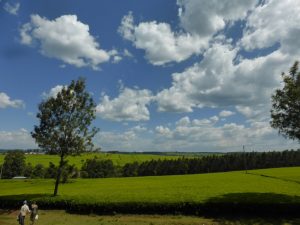 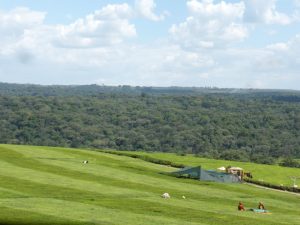 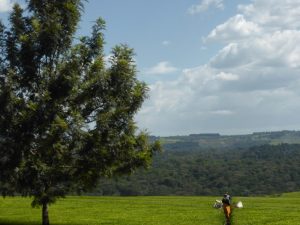 Tea is a beautiful green.

“I have been on different 18 airplanes in the past 3 months, making an entire revolution of the planet travelling east. No wonder I am tired...”
— Somewhere between Manila and Regina
[View All]