Juliette asked me if I went to church.  I told her I am an atheist.  She asked me if I pray to God.  I told her that I do not believe in God.  The extremely confused look that she gave me was pretty incredible.  She just looked at me with really wide eyes.  It is certain that no one has ever told her such a thing before…

I decided to jump in the shower.  Before I went into the bathroom, I discreetly took the skeleton key out of the hotel room door and took it into the shower with me so that Juliette could not leave and would remain locked inside of the hotel room.  I was pretty sure that she was a really good girl, but I do not know this girl well.  What if a guy came out of the shower and everything he owned was gone!  A man has to be careful!

After I was clean and packed, Juliette walked me to the mini-van taxis in Nakuru.  She told me on the way that she was a little sad that I was leaving.  That felt nice. 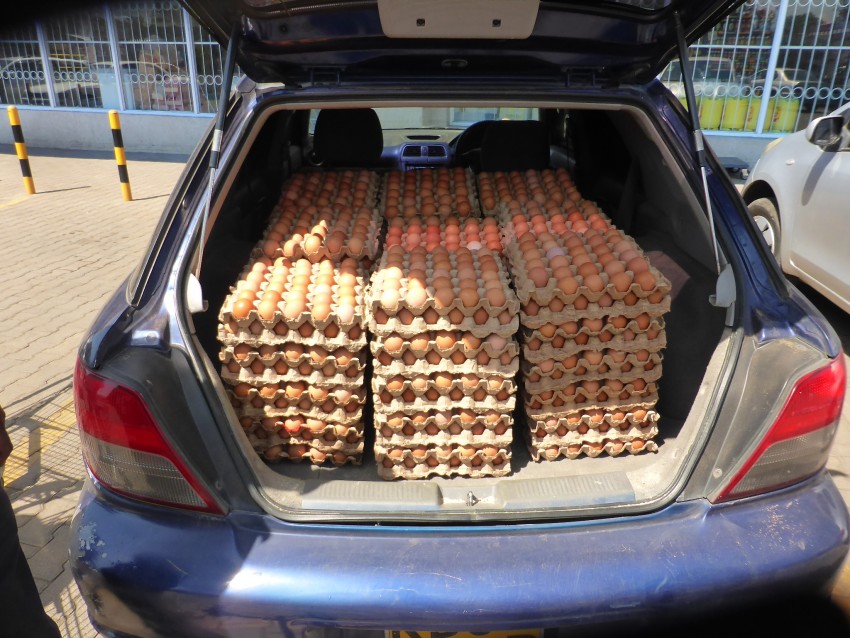 The Egg-Man arrives on the scene with a load of embryos.

We made our goodbyes at the mini-van and I caught a $4 ride for three hours to Nairobi.  During the ride, a zebra was casually grazing in the ditch on the side of a busy highway…just a small reminder of the exoticness of this continent.

On the side of the road, locals were selling hats made out of cow hide, with part of the tail attached to the hat, much like a coon-skin cap.
I arrived in Nairobi around 15:00 and found a bar/restaurant to sit in while I waited for Ulrika’s boyfriend and friend, Steve, to collect me.  I was in a nice place, but when Steve arrived, he told me that he had entered the bar next door . It was full of prostitutes who were eyeing him up and he wondered why I was in there.  I was not.  Prostitutes are terrifying and soulless creatures. 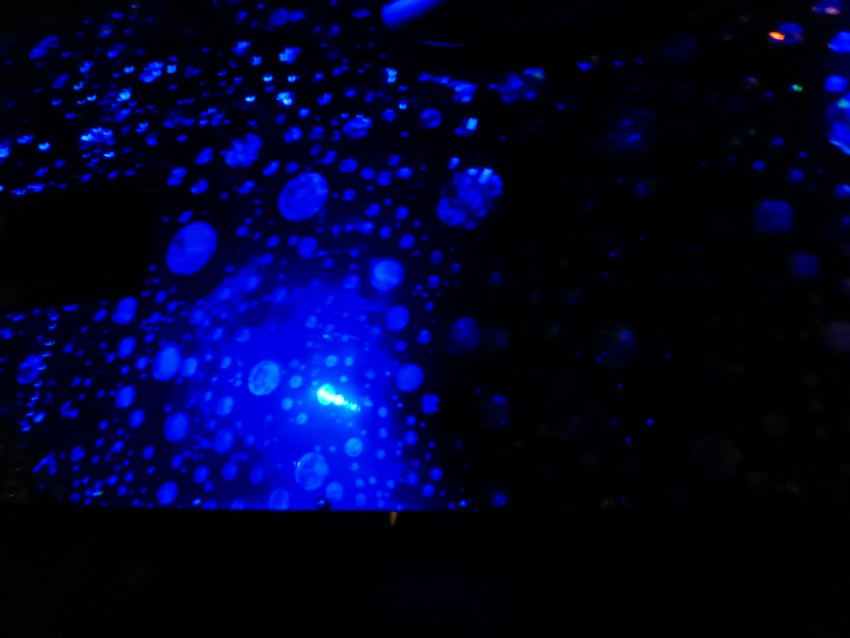 The inside of a matatu. When your public transportation looks like a party within….

Steve took me to his house to unload my backpack.  There is an amazing public transportation culture here in Nairobi that I have not seen anywhere else on the earth.  Nairobi Matatu Culture.  There are “matatus” (vans/buses) that have been pimped-out (I hate that term, but there is no better way to describe it) with amazing painting and graffiti on the outside of the vehicles.  Inside of the vehicles are seats like any other bus, but the rest of the interior basically resembles the inside of a disco.  There are speakers in all corners of the vehicles and they music is cranked up so that you have to yell at the person next to you to communicate.  LED lights align the interior at night to make the vehicles glow.  Most of the matatus are like this.  It is like you are climbing into a party when you are catching a ride across the city.  Nairobi Matatu Culture is amazing! 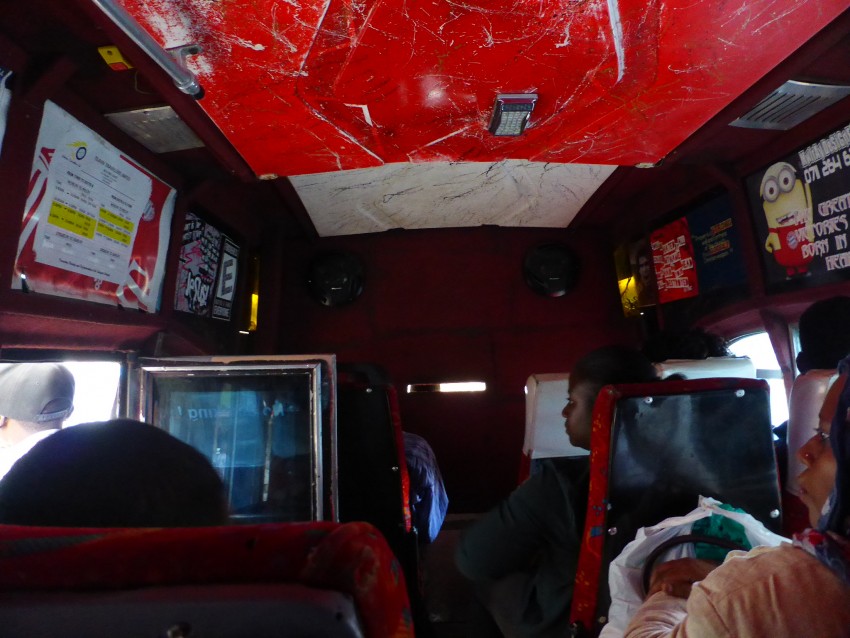 The inside of a matatu.

In the evening, Steve and I went into the center of Nairobi to meet Ulrika, a Swede working at the embassy here who I met in Rome last June.  The three of us went to a couple of bars and met up with some of their friends who work at the Danish embassy.  Ulrika and I spent much of the night chatting about our lives as expats.

Our crew of 10 barhopped a little. A waitress tried to cheat me out of money and I ended up making out with one of the Danish girls in our group on the terrace of one of the bars.  I had been talking to her and I could see that she wanted to kiss me.  I caught the moment, said, “Oh, I think you want to kiss me,” and went for it.  Then immediately after the kiss, I told her just like I was talking to an old friend, “You know, I am learning and growing. I could see in your eyes that you wanted to kiss me.  Ten years ago, I would have been oblivious to your look.  Things get better with age.”

She was shocked at what I was sharing with her and what I was telling her.  She told me she had not realized that she had looked at me so, and asked me to make the look for her back at her so that she could see what she looked like.

I said, “You know that look people make when they want to make out with you,” and told her that it would be impossible to mock her.  Then, I made out with her again.

Ulrika and Steve told me that they were ready to go home.  I overheard my Danish friend telling them that she was going to sleep at a friend’s house, so I figured that was probably not going to work out well for me.  I was quickly trying to think about how it would all go down. Then, I was trying to figure out how I would find Steve’s house alone the next day…  I told Manka that I would go with Ulrika and Steve.  She seemed surprised, hugged me, and I got into the taxi with my friends to go home. 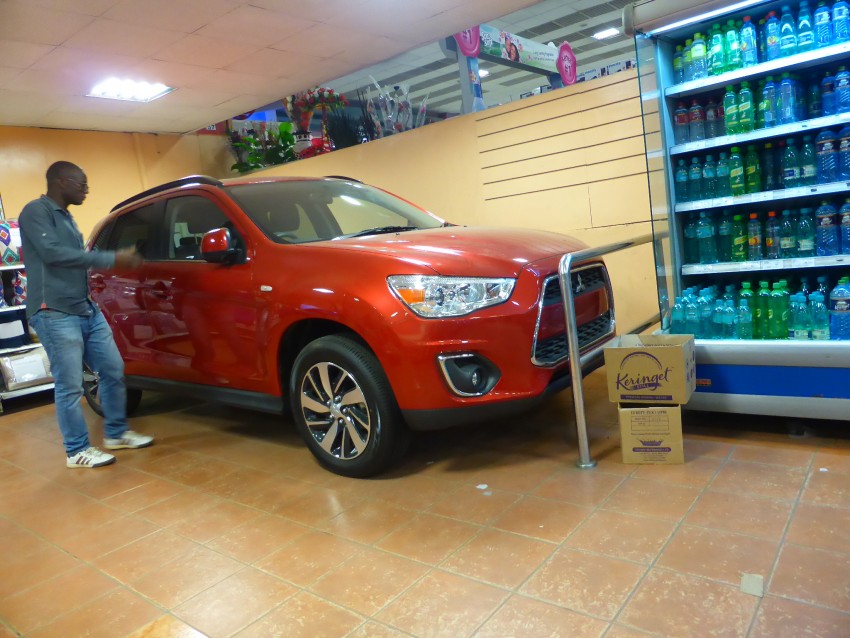 It appears that you can buy cars from Nairobi supermarkets!

On the drive, we stopped at a supermarket.  Nairobi is far more advanced than any city I have been to in Uganda or Tanzania and things from home are accessible here.  Unfortunately, because of this, I am craving western things like pizza.  It is shameful, but I guess I miss things.  In the supermarket, I realized how much I miss granola breakfast cereal, so I bought 750 grams of it for $7.50 and some milk.  I could not wait until we got home where Ulrika and I each had a bowl before we went to bed at 04:00. It was nearly breakfast time by then anyhow… 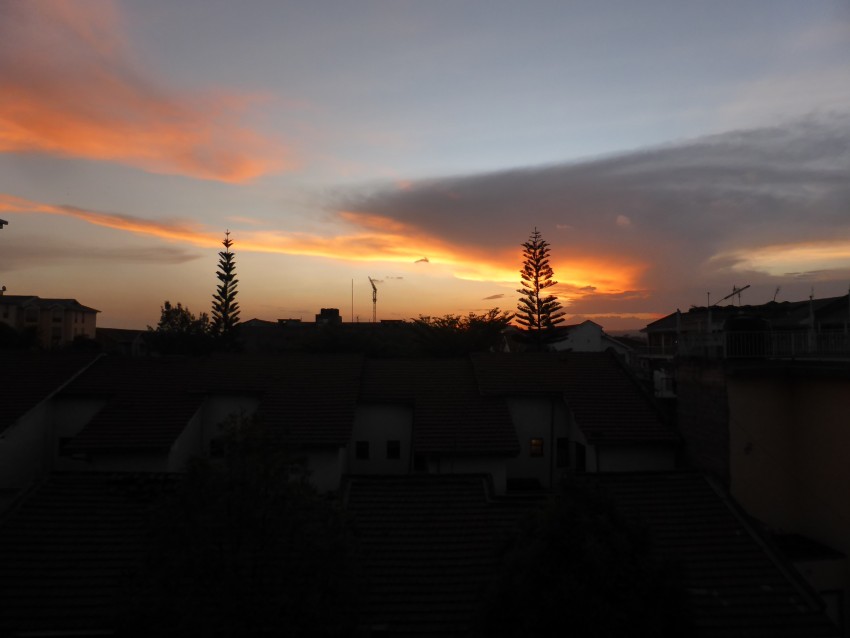 Nairobi sunset from Steve’s balcony earlier in the day.

“Trying to get someone from Africa to read a map is a real chore.  I guess they are never taught this skill in school because it is always seems like when I am showing someone a map, they are seeing one for the first time in their lives.  It is always like this.  More often than not I have found that Africans would sooner drive in some random direction, with no idea of where they are going in hopes of accidentally stumbling across the place, rather than looking at a map.”
— Life in Africa
[View All]