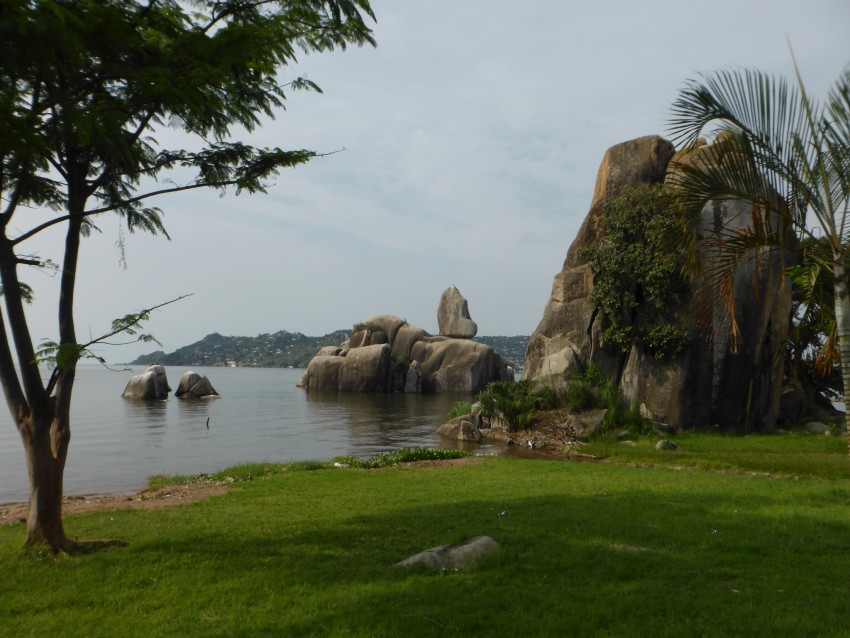 
And just when I think how tough it can be in Africa as a Caucasian man battling through the touts, the would-be scammers, and the relentless drunks, I meet a young Chinese girl staying in the guesthouse who is traveling all alone and barely speaks English.  Yeah, I know.  And that makes me think that I kind of suck and am being a little bitch.  Imagine the battle for her…
Today was a maintenance day.  I need one of those from time to time.

I have hired someone to help me to keep the blog tidy and to try to make it grow through marketing.  I just do not have time to write and try and learn the marketing skills to make it all grow.  Last year I read Dare to Succeed by Mark Burnett, the man who created the Eco–Challenge and Survivor series.

He says:
– A person needs a team.  One cannot climb a mountain alone.
– Never use negative energy.  It is incredibly draining.  Like a tub of water draining, negative energy increases the speed.
– Be positive all of the time.
– Enjoy competition.
– Handle all situations with confidence.  Obstacles make you creative.
– So handle obstacles calmly and confidently.
– Trust your gut.
– Stick to your guns when you know you are right.
– It is okay to be disliked now and then, if that is the way the best results are achieved.  In the long run,  you will be remembered for results, not brief moments of unpopularity.
– Make your dream one you can handle.
– Make it a dream you cannot live without.
– Design a map to get there.
– Set a series of achievable goals leading to the dream, small and realistic.  These will bring confidence.
– No goal is complete until it is entirely finished.  Halfway does not count, nor do good intentions or high hopes.
– Your words and actions reflect off of each other, holding your behavior up for examination.
– Theodore Rosevelt said it is only the brave souls venturing from the stands to the arena floor to join the action who achieve greatness – so try to live life to the fullest.
– Believe in yourself.
– Push for your absolute best, all of the time no matter what you do.
– Refuse other’s limitations instilled on you.
– Put yourself in positions that scare you from time to time.
– Keep pushing forward.  Always forward.

So, I have hired someone who brought positive energy to the application for the job posting.  I really hope this works well…!

I applied to some talent agencies in London today to see if they are interested in what I do, and then I went out for a task…

1.) I entered a pharmacy.  It happened by chance to be the pharmacy I had been in yesterday and the guy behind the counter was the same guy as before.  When I was in there yesterday, I bought condoms off of him.  I remembered him because I had really grilled the heck out of him about the best brand to buy in Tanzania.  (No brand-name knock-offs on purchases of those in Africa!)  When I realized I was in the same store and it was the same guy, I immediately wished I had been there to buy more condoms, just to have imagined what his mind would have been processing about what kind of night I must have had…

2.) Unfortunately, I was there for dental floss and I told him so.  I did the “flossing my teeth” charades action to make it clear that it was dental floss I was after.

3.) His English was about 20% and that is upper echelon in Tanzania.  He did not have dental floss, but he recommended that I go to find it at a local dentist.  He tried to explain the way and mentioned landmarks, none of which I knew.  I told him I knew how to find this pharmacy and I could get back to my guesthouse.

A guy from a small adjacent office came out to see what the English was all about.  That guy tried to explain the way to the dentist.  He also tried to use landmarks.  The guy I knew laughed and said in Swahili, what was sure to be, “The silly white man has no idea where that is.”  The second guy said, “Ah, I will just take you.”  And he did.  We went for a five minute walk together and he took me to a dental office with a sign showing a Caucasian man with a white shiny smile.  I asked my leader if he drank beer, thinking I would buy him one tonight for his hassles, but was almost certain that he did not drink because his name was ‘Hassan’ which sounded like the name of a man who probably did not drink beer.  Hassan confirmed my guess.  I shook his hand and thanked him for his help.  Nice guy.  Most Tanzanians are really wonderful people…

5.) In the dentist’s office, I looked really out of place.  I asked the secretary if she could sell me some dental floss.  She said they did not actually sell it as a product, but told me I might be able to make a deal with the dentist.  The dentist came out of the office and wondered what I might be doing there.  I told him I needed dental floss.  The same conversation happened; he said they did not actually sell it as a product.  I told him I had been to at least six pharmacies in the past few days, and that no one sells it and that he is my only hope.  He said he usually has it, but that he is out of it right now.  He made a phone call to his favorite pharmacy.  A pattern was developing and the pharmacy told him they were out.

6.) The dentist told me to leave my phone number with his secretary and he would try to find dental floss for me.  I told him it would not do any good because I would never be able to find the place that he found that sold it.  He said he would get it to his office and I could come and pick it up from him there.  Deal.

7.) I complimented the secretary on her hair.  It was nice.

8.) Outside I went to head back to my guesthouse.  On the way, I found a pharmacy I had not noticed before.  I tried them.  Same thing…they usually have it, but they were out.  They send me to a building that they said would be in the same position as theirs on the next street over.  I said, “I’ll never find it!”  They said, “It is the exact same building position, the next street over.  You can not fail!”  That seemed suspiciously too easy…

9.) I found that building, though it had no sign out front, and was not the exact location as theirs on the next street but it was close.  I also found that they were out of dental floss.  What a surprise.  They told me to try to find the Crest Hotel and maybe I could find it in the pharmacy on the very next street after the hotel.

10.) Off I went.  I knew of the Crest Hotel as I had passed it between the dentist office on the way back to my guesthouse and the new pharmacy I had found that had sent me on this very wild goose/dental floss chase.  I had been around enough in my hunt that I was now remembering landmarks.

11.) I found the pharmacy. I walked in and looked behind the counter. There on the rack was one package of dental floss remaining. I pointed at it and shouted, “YESSSS!” The man behind the counter was confused at my unbridled-weird-white-guy-enthusiasm. I told the man I had been looking for what he had for nearly the whole afternoon. I do not think he understood a word I said and charged me the marked price of six freaking dollars for the floss. $6! I had worked too hard to go back on it over a 300% increase, so I paid the man…

And that my friends, is how much work Africa often is for the simplest little things…That was just dental floss.  Imagine trying to get anything substantial completed…

When I went out for dinner, there were a group of African men at the table in front of me.  African people yell at each other a lot.  Yelling occurs here far more often than in North America or Europe.  Actually, if you hear someone yelling in western culture, you are like, “Holy.  Yelling.  What could ever be a reason to be yelling for.”  Not so in Africa.  You can yell over nothing here.  There were five men, four at the table, and one standing above it, and the four at the table were yelling at the man standing above the table who was trying to hold his own against them and yelling back.  But what I find crazy is that, yeah, it is clear that I am a foreigner and it is without a doubt that they are aware of my presence.  When they were arguing in Swahili, sometimes they would use English sentences.  For what, I do not know, because the English was badly broken English.  Were they doing it for me so that I could know what the argument was about from time to time?  Were they using English to make points and hoping I would chose a side?  I have no idea what the rational was.  But they would be arguing in Swahili and then one would say, “I didn’t say that.”  And more Swahili and then one would say, “That’s it!”  Then more Swahili yelling and then “Let me tell you one point…”  Then back to Swahili.  Weird…!

“As we were filling out forms in the office, it asked, ‘Sex?’ I wrote down, ‘Last Night.’ I showed that to her. She almost peed in her pants laughing.”
— Manila, Philippines.
[View All]