Mwanza Hooker Fight Lullabies.
Jan 18
Mwanza is a very pretty town. It is gorgeous.  The rocks. The colorful lizards.  And no one really hassles me in the streets…. 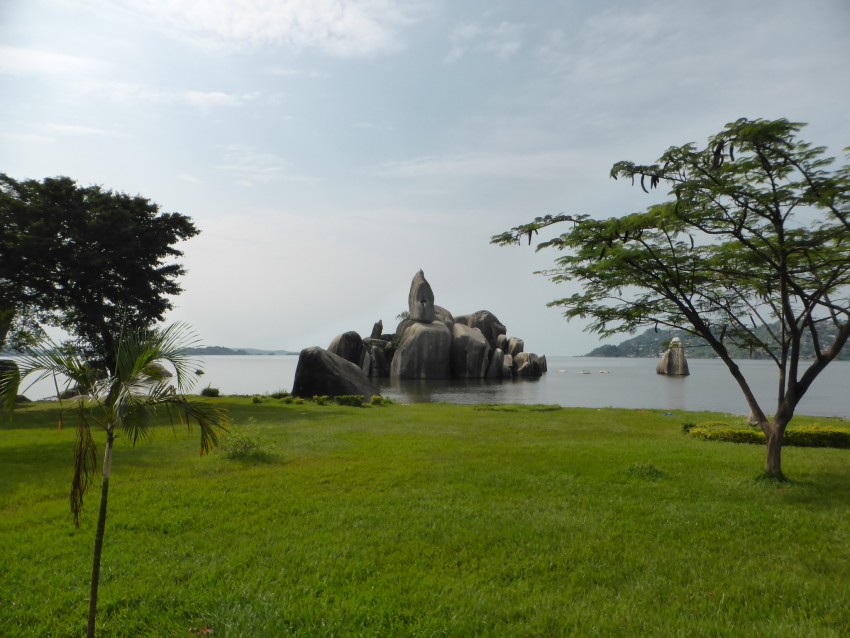 Just look at the water’s edge of this pretty city.

Actually, it’s not entirely true that no one hassles me in the streets.  This town is nothing like Arusha or Moshi. Most people just stare at me in disbelief that there is someone in their town who is not an albino and has skin that is white.  I am not even sure if having green skin would cause as many stares as I am getting now…

But, they leave me alone, except for two people today.

One was a drunk of about 28 who came running after me when he saw me at the market.  I could hear him talking to me as I kept on walking.  Then, I heard someone running and I knew it was him coming for me.  He had a plastic shot bag of gin in his hand and he was following me around talking nonstop about whatever. I was ignoring him.

He was very drunk.  I did not know how to get rid of him.  I was just walking through the stalls and ignoring him.  Eventually, I had to duck into a market restaurant area where he kept on trying to talk to me and eventually the staff got in his way and would not let him near me.  Eventually he gave up and left.  I was not hungry, but I needed an escape.

It is the drunks who are especially relentless.  They come after me aggressively with ideas of finding a small fortune in my foreign pocket and try to drunkenly con me into giving money to them. It is hard to deal with.

Drunks do not know when to quit.

The second person who was all over me was a girl of about 22 who came into that very restaurant with a friend and sat down at a table next to me.  The girl was friendly at first and asked my name.  Then she asked where I was from.  Then she asked me to buy her dinner.  She did not look any worse off than me.  I told her no.

Her friend had a meal of chips and eggs delivered.  I told her that now she could share with her friend who obviously has money and it was a great opportunity for her.  I said it harsh with a straight face.  Not long after she ordered a Coke, that she paid for with her own money, I moved to a seat further away from her at the table.

Some things in Africa are so wonderful and beautiful.  The land is.  The animals are.  And most of the people are.

Most of the people are pure and so sweet. They have genuine smiles and they are so happy. They are not out to try and take all that I might have.  However, because  of people like the two I met today, I am naturally defensive towards everyone who approaches me for anything.  And while many of the people approaching me are probably pure and true, I am hesitant to be too open because of their possible sinister desires.

I wish there was a way to say to all of the wonderful people that I am not really cold, but that I have to be defensive because of the two in every crowd of their fellow country-people who are trying to take advantage of me.

And so I have to be a bit of an asshole all of the time because I am forced to have an edge. Then people who do not deserve it feel that edge and probably assume that I am a complete dick. Which I am not, but I have to be prepared for those people out to get me who are ruining it for everyone…

A couple of really entertaining things did happen today though… 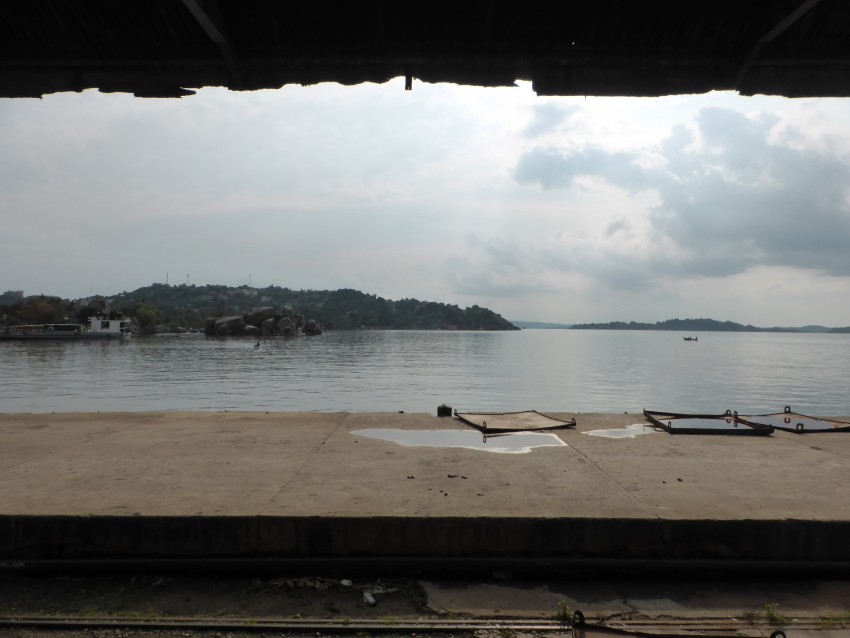 From the ferry terminal.

2. I found a woman with a sewing machine on the street.  I approached her, undid my belt and showed her that my button was missing from my shorts.  She knew what I wanted and found a button.  Two men, who were keeping her company, were looking at me.  She got out a needle and thread, so I shrugged my shoulders, took off my shorts on the street in front of then, handed her the shorts and stood there in my underwear.  Oh, those men thought that was pretty hysterical.  It made their day! 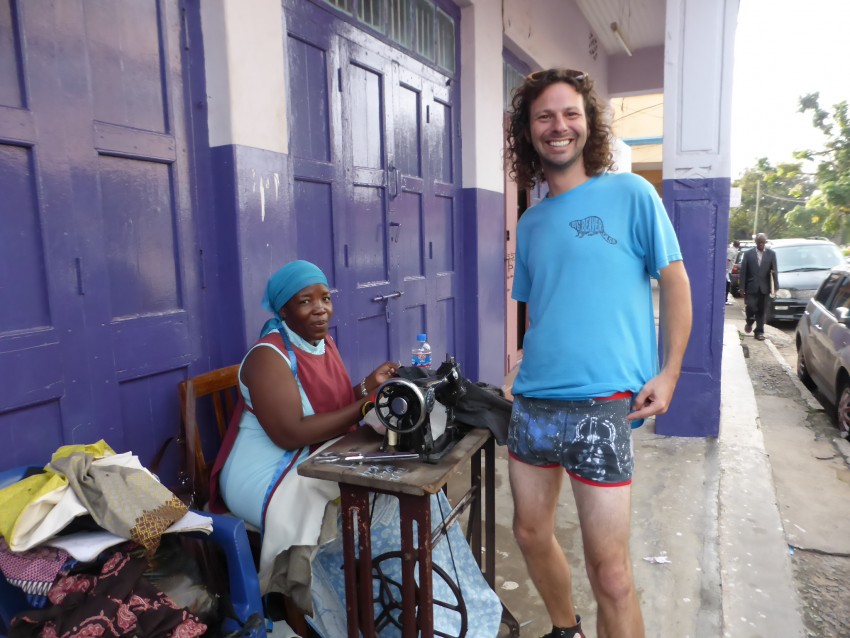 I found this lady to sew a button on my shorts. Two local man sitting with her really enjoyed the foreigner who took off his shorts to stand there in his underwear while she sewed a button.

3.  A Mwanza Hooker Fight is taking place right at this very moment as I write this blog before going to bed.  They are just below my window and in front of the bar I was in last night.  Some of them out there last night were very pretty.  The audio levels of high-pitched African female voices screaming at each other are crazy.  They go from yelling to screaming, to squealing, to yelling.  It has been taking place for at least 10 minutes.  A Mwanza Hooker Fight is entertaining to listen to.  I would love to be downstairs watching it right now, but I am too afraid of being murdered. 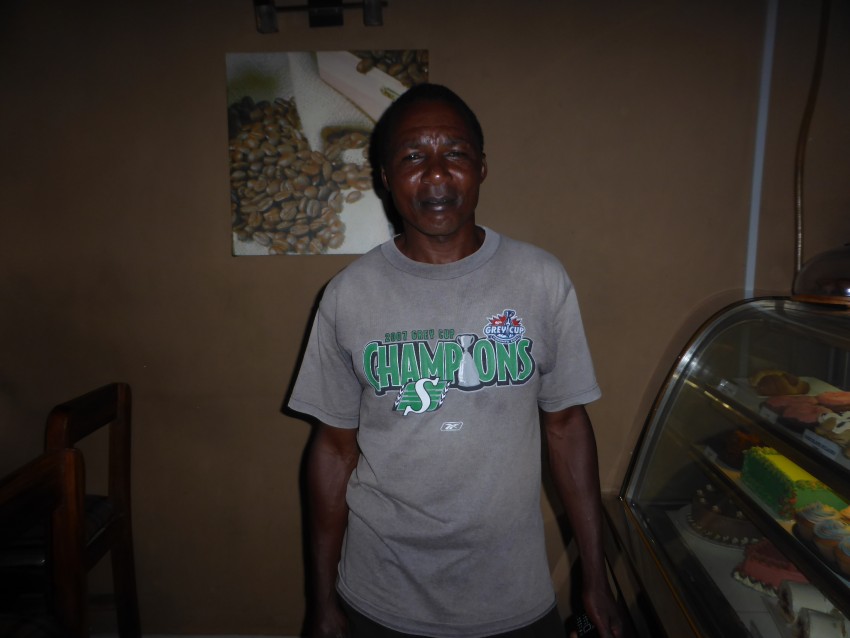 * A man came into a shop where I was today wearing a Saskatchewan Roughrider shirt 2007 Grey Cup Champions.  In Mwanza, Tanzania.  Wow!  Value Village cast off clothing.  Wow! 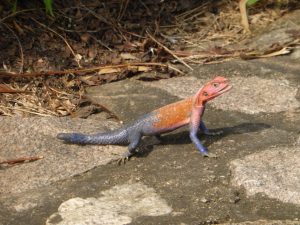 Yea, that is a colorful little lizard. 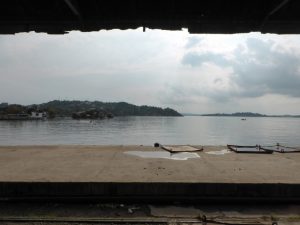 From the ferry terminal.

“I had a really nice time hanging out at the little bar next to the guesthouse.  A woman there in her 50’s cooks me lunch and dinner.  I call her ‘My Mamma!’ today.  She liked that.  The beer-garden area was full, but I sat at the bar.  There were four younger women in the area around me: a bartender and three of her friends.  One of the friends spoke fantastic English.  She was talking about the bartender when she said, “Maureen is loving you, but she doesn’t speak English.  Only Swahili.”  Maureen shared her bananas and pork dinner with me.”
— Life in Tanzania
[View All]