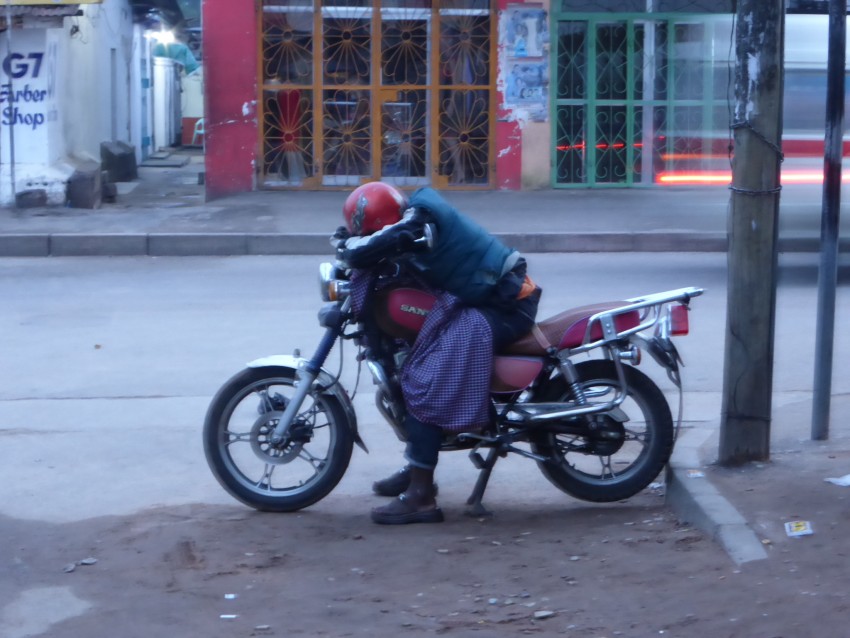 06:40 is too early for this motorcycle taxi man. He did not even wake up when I approached him about a ride.

I decided to catch the ferry to Ukerewe, the biggest island on Lake Victoria. Ukerewe is a strange place famous for witchcraft and for having a very high percentage of albinism.  I got up at 06:00 to get to the ferry by 07:00, but it did not leave until 09:00.  I have learned that African time is not accurate in any way, but it is tough to chance getting left behind in case something does runs on time…

The ferry to Ukerewe, a three hour journey…$2.50.  There were probably 60 people on the ferry.  The ferry must have used close to that $150 on fuel consumption.

For most of the journey, I stood up on deck enjoying the ride.  Then, it started to rain so I went inside to seek refuge.  When I found a place to sit down, I was across from a man about my age who had his feet out of his shoes.  On his feet was a small portion of cloth that was once a pair of socks. The socks could actually just be called “holes”.  I went into my backpack, found a pair of socks, tapped him on the knee and went to hand him a new pair of socks.

He looked at me in confusion so I pointed to his feet.  His buddy, who was sitting beside me, had a laughing fit and would not quit high fiving me as he laughed.  It made his day.  The man put the socks in his bag, then 30 seconds later, he took them out again, pulled his holes off, threw them in the ocean, and put my pair of socks on.

It seemed to be the best part of the day for his friend who giggled for a very long time every time we made eye contact. 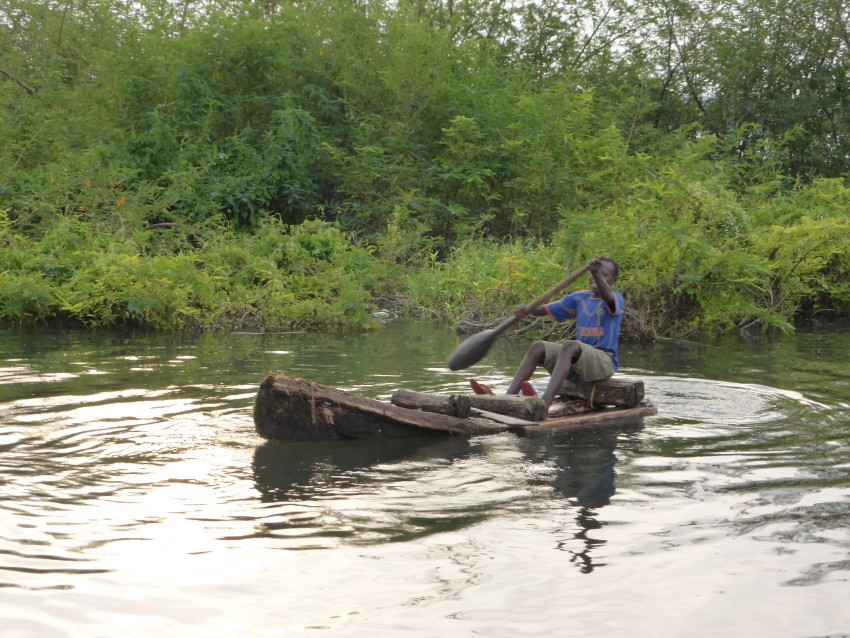 Young boy on a local boat.

Once I got to Ukerewe, the laughing man (whose name turned out to be Andrew) and two of his friends walked me to La Bima Guesthouse.  That was nice of them.  A very pretty girl took me to check-in and led me to my room.  There seemed to be chemistry immediately and I think she wanted to stay in the room with me.  She went to work and I went for lunch. 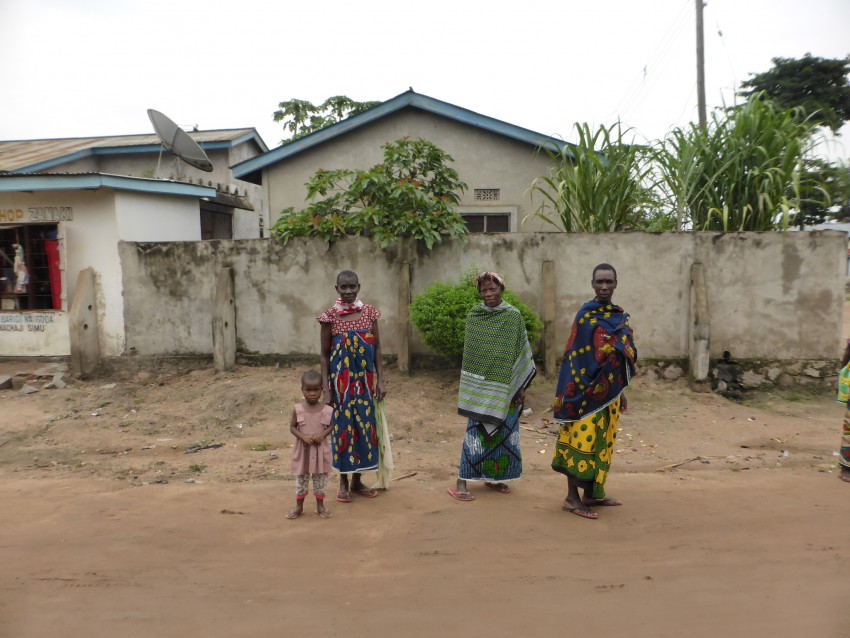 I spent the afternoon walking around.  Locals are amazed that there is a Caucasian man in town.  People are so warm.

‘”A white guy! Holy shit, I have never seen one of those before! I had better say ‘hello.'”

A lot of big, big genuine smiles greeted me, but I felt weird walking around, like a celebrity parading himself through town. I stopped at a children’s volunteer center today. It was ridiculous/crazy. A toddler was so scared of what might be wrong with my skin that he was bawling his eyes out! He freaked out every time I got close to him and his mom. A boy of about 6 came to the door to see what the fuss was about, and I am not kidding…. He saw me, his mouth dropped open, and he ran the other way to hide. The ladies who run the center and I laughed so hard together…It is what I do: make babies cry and terrify children… 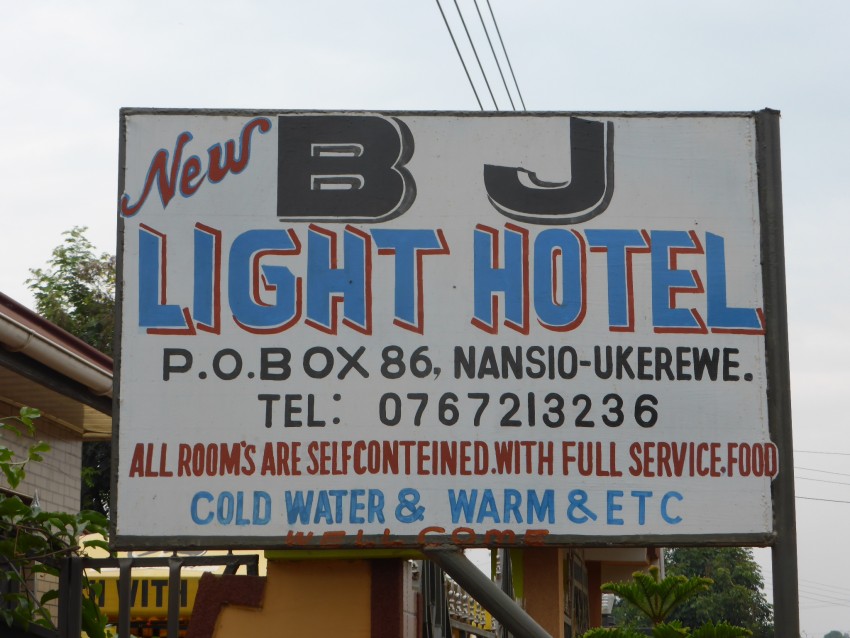 I came back to the guesthouse later for dinner.  I ordered inside the restaurant they had and then went to sit outside in the courtyard at one of the tables.  The girl asked me where I was going to sit.  I pointed at my hair and said, “Just look for this!”

At the bar, the receptionist who had checked me in was in charge.  She had a big smile for me.  I ate, drank, and when I was bored of the place, I went to talk broken English with her and another man at the bar.  I currently have a visa for East Africa which started today and that I am supposed to get at the Rwanda border. But I am so remote right now, that Lonely Planet says nothing about this island and I enjoy being so far off the trail.  Lonely Planet even admitted they know nothing about this island on their website if you Google “Ukerewe”.

The man and I discussed, Ukara/Ukora, the next island north.  He called a friend who confirmed that I can get there by local taxi and a boat for $1.65 total. He says I will be able to find accommodations.  It is even more remote: just farmers, fishermen and an island.  I asked the girl with the big smile, who was standing there, if she wants to see Ukara.

Her English is only about 10%, but that is 9.7% better than my Swahili…I want to get deeper into places in Africa, but the problem for me is a language barrier and I cannot seem to get past the surface.  But with a local, maybe even 10% can get me deeper…So, perhaps I will take the big smile with me tomorrow even though I do not know her.  She is attractive, and while I wish her English was better, maybe it can be a fantastic time.  I ate a meal in the restaurant for $2.50, a beer for $1.25, and hotels are $7.50, so I can probably afford to take a guide. I sure hope this works and opens doors….

** I have yet to see any albinos, but Ukerewe Island has the highest concentration of cross-eyed people I have ever seen in my life… 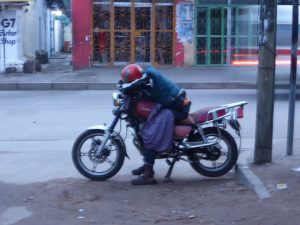 06:40 is too early for this motorcycle taxi man. He did not even wake up when I approached him about a ride. 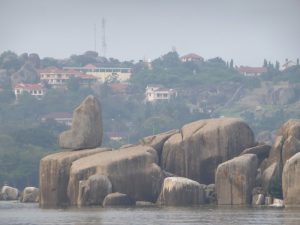 Look at that rock on the left having a seat. How did that happen? 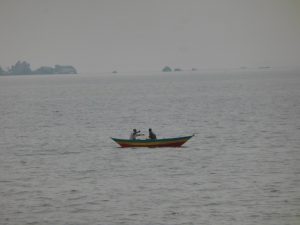 “Morning, fishermen!” I love the colors of the boat against the grey. 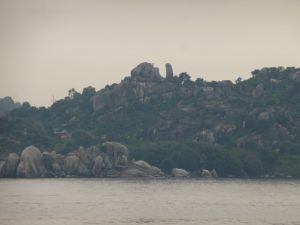 The outskirts of Mwanza houses and rocks. 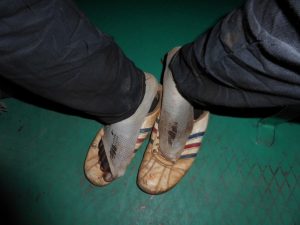 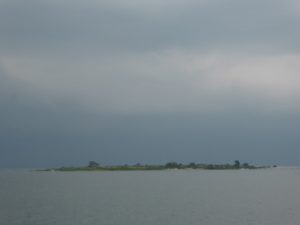 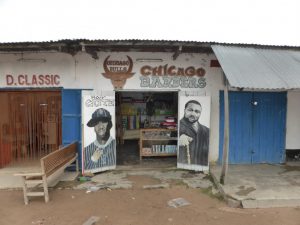 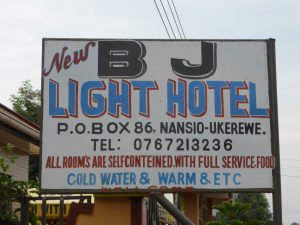 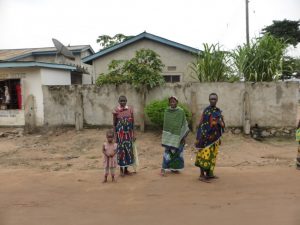 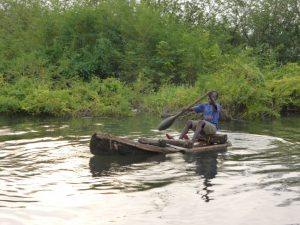 Young boy on a local boat. 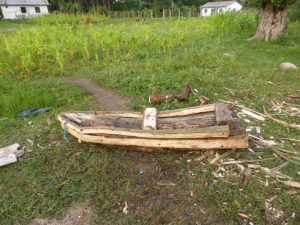 A boy of about 15 was hacking this apparatus into shape with a machete when I arrived.

“She is taking care of a dog for her friend. Buddy is an older, small, dog. He was depressed and would not eat for the first two days with his family gone. He did not like her because she was some stranger in the house. Then I showed up at the door and he was excited to meet me. We became better pals than he and her were. Then Buddy figured out that I was there for her and not him. At that discovery, Buddy decided to like her and he stopped liking me so much. He started giving her non-stop attention and started ignoring me. Now Buddy and I are both after the same gal even though he did not even care about her until I showed up. But now he wants her too. It reminds me of a girl that I grew up knowing at home. I always had a crush on the her, but it seemed I was the only one who did. No one else was after her. Then a super cool guy decided that he liked the girl and started dating her. That verified her and then after they broke up everyone wanted her. Buddy the dog is 'everyone' too. Apparently that psychological pattern has no attachment to a specific species and is prone to crossing through them.”
— Male Psychology in all Species
[View All]