Arusha to Mwanza – A Sore Ass and Overlooking the Obvious 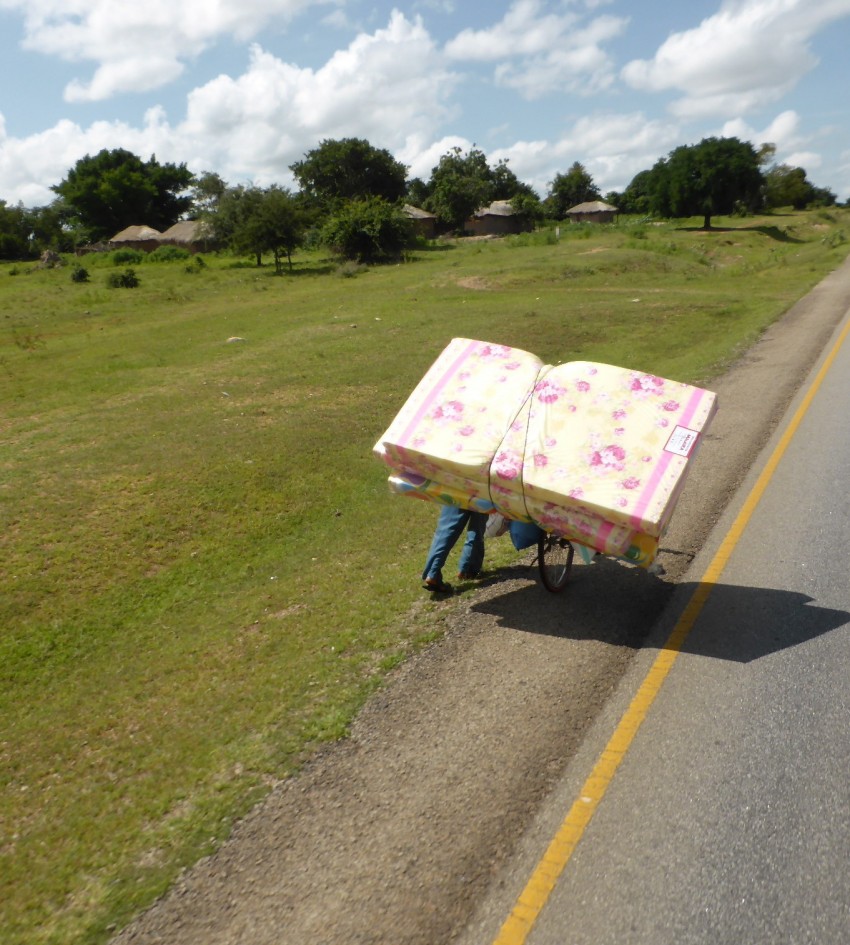 I've just got to get this mattress home somehow....

Arusha to Mwanza – A Sore Ass and Overlooking the Obvious.
Jan 17
Swahili loves to double up on the words language-wise.  Here are some examples.  Almost every word I know in the language is doubled.

I was up at 04:30 so that I could shower and check in for my Arusha to Mwanza bus.  I had bought a bus ticket for a reputable bus company called Air Jordan (it is incredible how much they love Michael Jordan here).

When I got to the bus, my seat was partly broken and leaning to the side.  The padding just covered the wood inside, but the word ‘cushion’ would be an exaggeration.  I spent 12 hours in that sucker today giving me a sore ass and a lack of sleep.

Wait a minute…that sounds way worse than it actually was.  But, it was an unpleasant bus ride.

Before we got going, the bus sat in the station parking lot among 10 other buses.  The side door of the bus was open, and the exhaust of the diesel bus next to us was positioned so that it went right into our door. It filled our whole bus with smoke that we had to breath for 30 minutes while we were waiting to go.

The air in the bus was actually blue in the light.  Good morning diesel!  Welcome to 05:30 in the morning.

I could hardly breathe and my eyes were burning….

In the meantime, hawkers were selling everything you could imagine.  Some guy came around selling loaves of bread to the people sitting on the buses at the station at 05:30.  And not only that, but people were buying the loaves of bread.  The hawker sold six loaves of bread to our bus alone.  I guess a hot item is cold generic sliced white bread at that time of the morning… 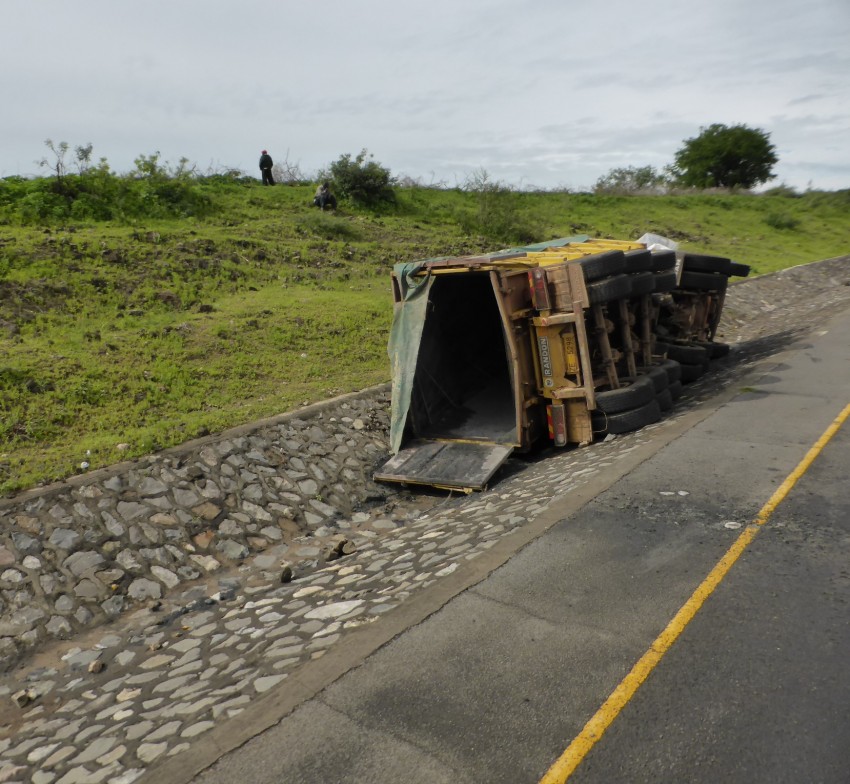 On the Arusha to Mwanza road, hawkers were selling everything when we would pull into small villages.  A guy with a set of wrenches.  A guy selling jugs of motor oil outside of the bus windows to the people inside.  A guy selling huge jugs of sunflower oil.  Honey in old alcohol bottles.  And they all wanted to sell it to me.  What would a foreigner need a whole huge jug of honey for?

“Who knows!  We just know you have money!” is probably what goes through their heads…

The bus driver drove the hell out of the bus. He drove so fast that I could see locals in villages giving him dirty looks.

About every 20 minutes there would be a police officer on the highway.  The officer would climb aboard the bus, look around, get off and bang the side of the bus to let us know we could carry on again.  I think that happened at least 20 times today on the 12 hour trip from Arusha to Mwanza.

The road was crazy and at one point the driver had to dodge a car tire on the road.  Instead of someone removing the tire from the road, they had placed several green branches inside of it so that it would be easier to identify by a vehicle speeding along down the highway.

On the way from Arusha to Mwanza, the land changed and suddenly became very rocky.  Then, those rocks became boulders.  Rocks seemed to be coming from out of nowhere and they were freaking massive!  And they were everywhere.

I am talking about someone in a village having a house and a small yard around the house.  But, almost the whole yard is taken up by one giant rock that is equivalent to the size of the entire house.  Weird! 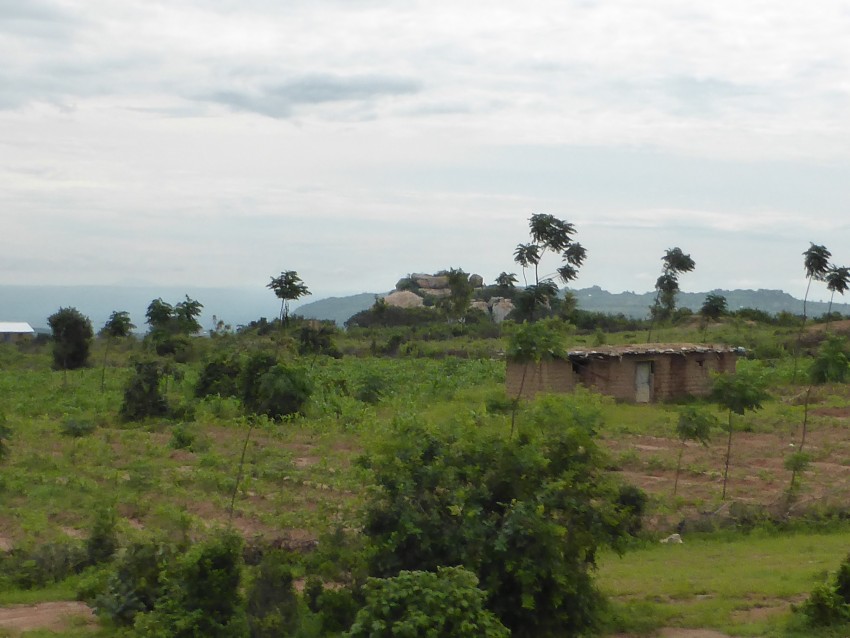 The start of the huge rocky landscape.

After arriving from Arusha to Mwanza, I found a guesthouse and went for dinner.  One child followed me begging for money..then it turned into four… which eventually turned into six.  None of the kids looked dirty or homeless.  They just looked like kids who have been told that foreigners have money.

There were six voices at once, following me around for at least five minutes, hounding me.  They would not stop.  They followed me stop by step.  I started to lose my patience.  A man getting into his car could see this happening and yelled at the kids in Swahili and eventually they left me to walk on alone.  It was terrible…

Across the street from my guesthouse was a bar so I walked there for a beer.  A very attractive local woman outside said hello to me.  I went in and sat at the counter on a stool to make friends with the bartender and her friend, who was sitting beside me.  The bartender introduced herself to me as ‘Happiness.’

As we were talking a girl came and stood beside me.  She introduced herself and asked me if I would buy her a beer.

I told her that you cannot just come and stand beside me, introduce yourself, and then ask me to buy things for you.  I found her unattractive, which should not make a difference, but it does.

When I had finished the neck of my beer, another unattractive girl came and stood in the same place, introduced herself and asked me to buy her a beer.  Nope.  She was asking and asking and asking.  Nope.  Then she asked me if I wanted a woman.  I asked her, “You?” She said yes.  I said, “Nope.”

When I could finally get rid of her, I asked Happiness, “Is this what a Mwanzan woman is always like?”  She confirmed.  I was bored by the gold-digger and decided to go home.  When I went outside, the very beautiful woman I had initially seen was still standing there.  I approached her and said, “You are gorgeous.  What is your job here?  To bring people into the bar?”  She said, “No speak English, but I love you!”  She asked, “Where go?”  I pointed across the street to my guesthouse.  She asked, “I come with?”

It all made sense.  She was very friendly and in love with me because she was a prostitute.  I looked a little further down the building and there were three more standing there in the shady light.

I left the beautiful hooker and went to my guesthouse where I asked the local man running the place, “Are all of the women out there prostitutes? ”  He laughed, high-fived me and said, “Yes.”  I went to my room to go to bed… 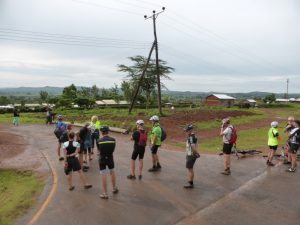 What the heck is this in the middle of Tanzania? A Caucasian bike party? 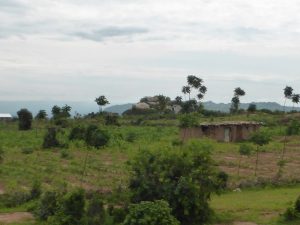 The start of the huge rocky landscape. 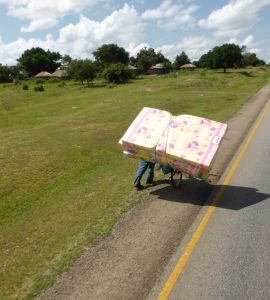 I’ve just got to get this mattress home somehow…. 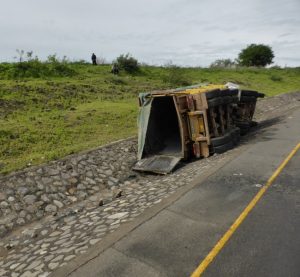