Masindi to Entebbe: Smooth Ridin’ Boring Timin’.
Feb 16
My hotel cleaning ladies seem to have a thing for me.  Both of them were in my room this morning.  One of them was on my bed and asked me to take her with me when I leave.  I asked her if she wanted to fall in love and if I was looking at my future right now.  She told me she wants to see Europe and North America.  She asked me if I am married, when I will marry, and if I have children.

If you are reading this and you are looking to settle down, come to Africa for a week.  You will have plenty of options…

My clothes were not covered in red dust.  I was still clean.  What is the fun in that?
Masindi seems limited and I did not really know what I would do there again today. So, I packed up and moved on out.  I was going to stop in a town called Luweero, that is closer to Kampala.  I was in the front passenger seat of a 13,000 ($3.80) shilling van, seated next to a local woman.  The price was the same to go to Luweero or to Kampala.

The woman asked me where I was going.  I told her Luweero.  She looked confused and asked me why I was going there. She convinced me that there is nothing there at all.  Just another small town…I decided to pass through Kampala and go to Entebbe instead.  So, the trip would be be Masindi to Entebbe.  Entebbe is on Lake Victoria and it looks nice in photos.

We were riding in a generic new mini-van, driving down a generic smooth black-top highway.  It has been a long time since I have been on a proper highway, but I have not missed it.

How characterless the new vehicle and smooth ride were.  110 km/h down the highway feels pretty boring now.  I do not like bashing my head on the roof of the vehicle much. At least on roads where you do, there is a lot of interest to be had for everything, from the vehicles to the scenery to the roads to the people walking barefoot down them…  When I arrived in Kampala, my clothes were not covered in red dust.  I was still clean.  What is the fun in that?!

The driver of the mini-van was sharing his cooked and salted coffee beans with me.  They were very tasty.  The girl beside me told me that long distance drivers eat them to stay awake on the road.  They came wrapped in a banana leaf. 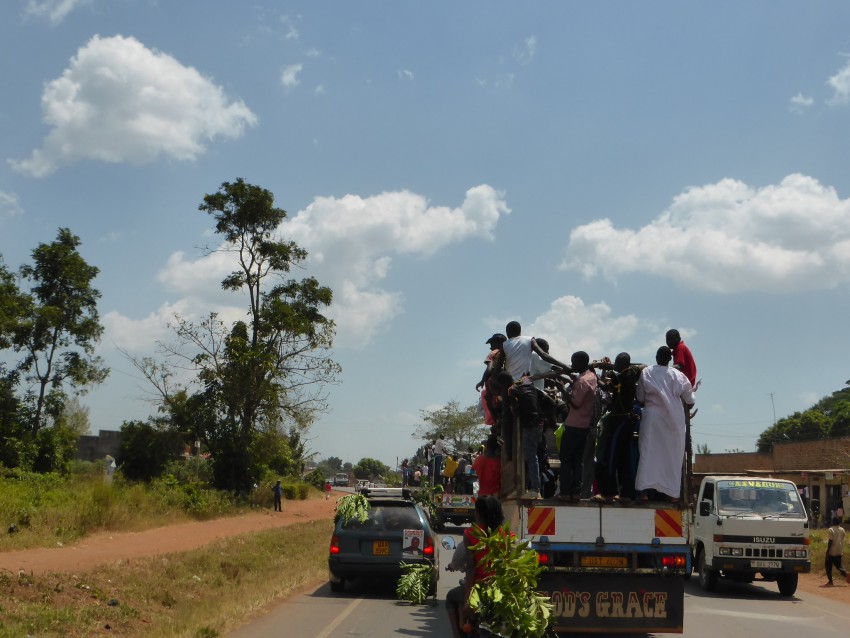 With the elections to take place in two days, there are political rallies everywhere.  Today,  they were in the vehicles driving down the road overcrowded with people blowing whistles and horns in preparation for the elections.  People were stuffed in vans, buses, and lorry-trucks, with many hanging off the sides.  Some of the vehicles had political posters stuck to them and some played very loud music.  People outside of their houses on the sides of the roads cheered for the vehicles.  Motorcycles whizzed by covered in political advertising to show support.  It felt like we were going to a massive football game.  It should be very crazy in Kampala on the 18th. 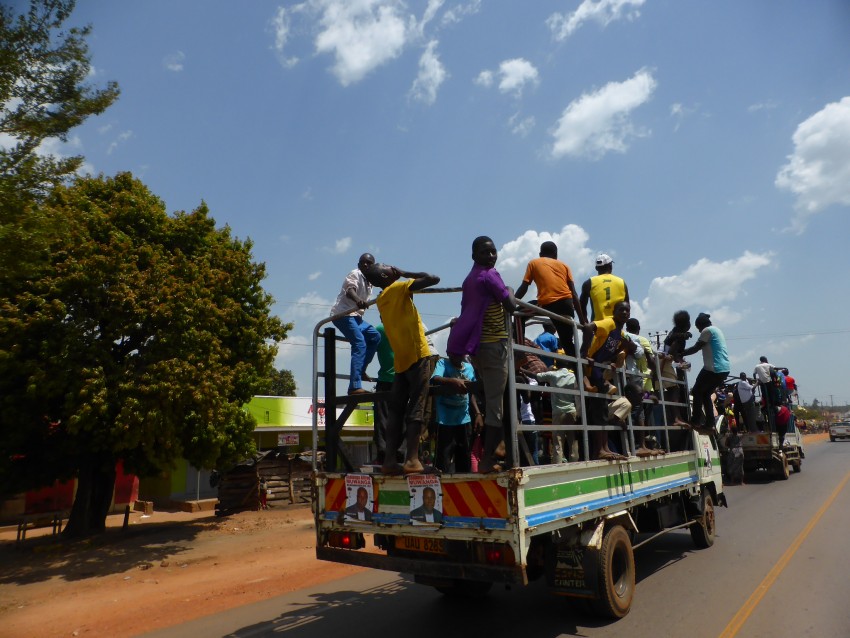 I found a hotel and made a reservation for the 18th and 19th with a room facing the street so that I can see what is going on below me during the election day and the following day, should there be riots.  I am curious to know how this is all going to go down.

Then, I caught a mini-van to Entebbe and forgot my Lonely Planet book on the sidewalk.  I was pretty mentally angry at myself for doing that.  I really hate the Lonely Planet guides, but they are so useful for the maps, border towns, and information on visas and countries.  It was a huge and heavy hunk of lumber at 1,000 pages, but I will miss the unpleasant weight of it and all the information I have lost without it.

There is no way I will find the Lonely Planet book referencing every African country here in Africa…  That sucker was handy.  So, I spent the next few hours trying to not be grumpy at my carelessness.  At least, it was just a book. 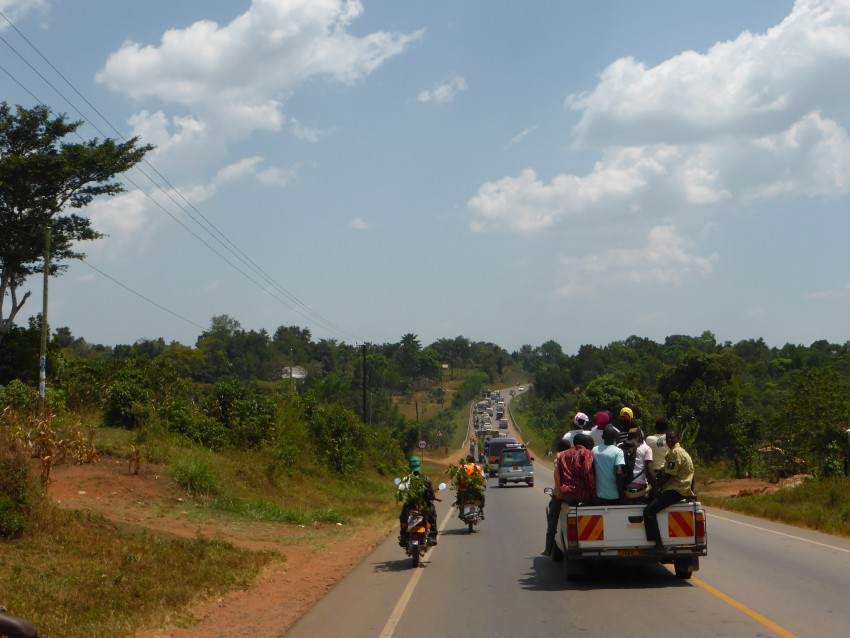 Lanes on the highway full of people getting ready for elections and making a lot of noise.

I found a guesthouse in Entebbe and found out that this is a very nice little city.  It is very safe at night, modern, clean, and somehow feels nothing like the Uganda I have been in for the past week.

Roasted bananas are freaking tasty.  Roast them like you would a hot dog.  You will not be disappointed!

So, I wrote that blog and was winding down for the night.  I was uploading it to the website when there was a knock at my door.  It was the cute 19 year old desk girl, who I had met earlier, wanting to know if I wanted her to cook my breakfast in the morning.

I was not sure if there would be a morning for me, so I declined in case I had a fantastic sleep in.  She, Stella, stayed with me to chat.  She would come and go and come and go from my room.  I told her she was cute because she was.  She said she was going to go and have a rest.  I suggested she rest in my room.  She got embarrassed and left.  Like a horse who knew she was going to get caught, but could not resist eating oats from the pail, she kept on returning, leaving and returning.

I had been having a bit of a lousy day and somehow the cake got iced anyhow after the adversity.

Ah, life is crazy.  Life is good.  It comes at you suddenly and you never know where from… Thanks Wonderful-Balancing-World-Vibrations! 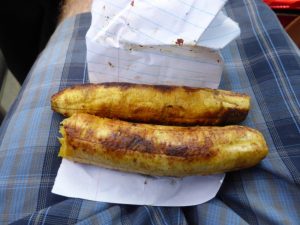 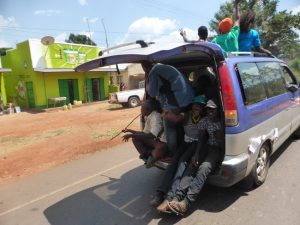 Ugandan political campaigners. The guy on the left was chewing on a stick. 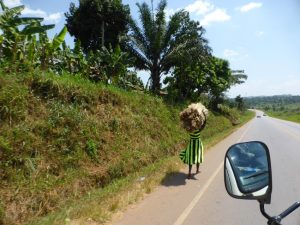 “Amy wanted to take us back to the venue where she had been as nothing else was open. She had stamps on her hands. One was kind of a smear, so Irmante found mascara in her backpack and we made our own stamps. Then after we made and smeared them to perfection, Amy wondered if it was not the ‘x’ stamp on her other hand that was the one to get into the venue. Irmante came through again with a permanent marker. Then, on the walk we found that the Camden Head would still let us in so we just stopped there and got drinks. At the end of the night as the bouncers were throwing everyone out, Amy did a fake ‘palm-reading’ on the bouncer who wanted our section to leave. “I see this line here. Are you creative? Oh, you are a musician. And this line here is very definitive. Was there a major change in your life here? Oh, you separated from your wife…” The bouncer was so happy to have his palm read that we were allowed to stay after everyone was gone. When we finally left he told us that we are the first people that he had ever let stay long enough to have to exit the side door. Fun!”
— Charm and Entertainment
[View All]