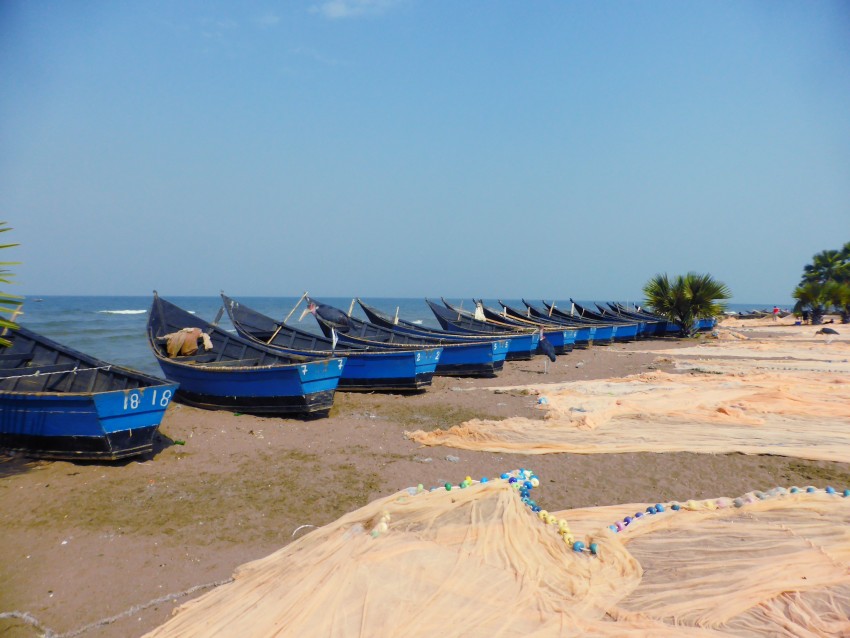 A fishing fleet owned by one man.

Butiaba to Masindi: Scrap-Heap Car Adventures.
Feb 14
Happy Valentine’s Day!  The closest I got to romance was this:

I walked into a cheap hotel in a town called Masindi in Uganda.  While I was waiting for a receptionist to appear, I noticed on the wall was a glass cabinet that said “Free Condoms” on the outside of it.  I wondered what kind of a hotel this was.  Free condoms is a bargain price. I went to take a handful, but I could not get my arm inside of the top of the cabinet opening.

A moment later, a local pretty woman came into the reception area.  I asked her about rooms and she had some free for 7,000 Ugandan shillings ($2.05). However, they did not have electricity sockets in the rooms so I would have to find a new place as the electrical device I have was dead.

Before I went to leave the registration office, I asked the girl if I could have some free condoms.  She told me that would be fine and went to reach into the top of the glass cabinet with her smaller arm to retrieve a connection of four condoms . She handed them to me and asked, “Is that enough?”

I said with a smirk, “For the first half of the evening….”  That made her laugh.  As I was leaving she asked, “Where is your girlfriend?”  I pointed at her and said, “Right here!”  She was laughing and embarassed.  I asked her if she was married.  She said she was.  I said, “Well, that is probably good news for you then,” as I stepped down from the property.  She was super embarrassed and giggling as I headed onto the street.  That was fun. 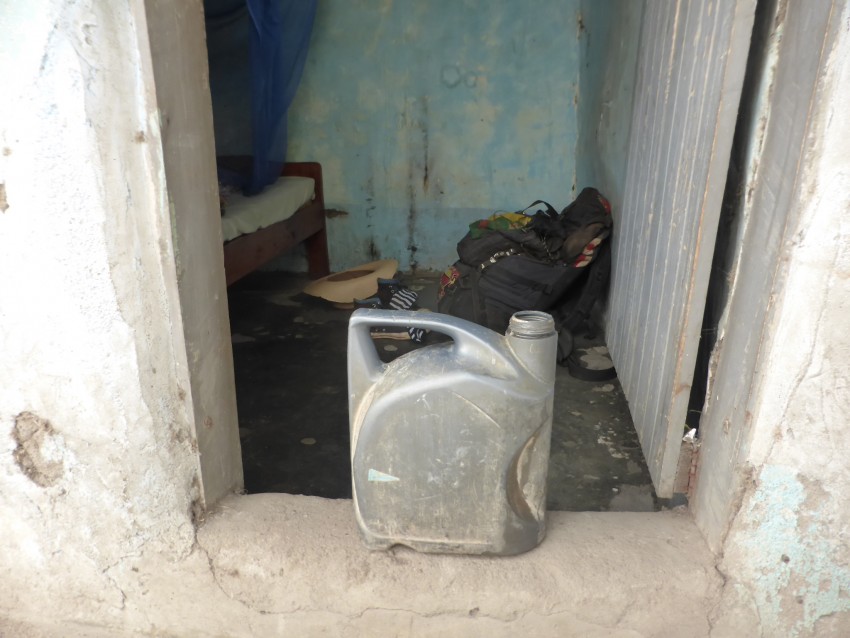 My day started much differently.  I woke up in the Ammoti Spice Lodge and Restaurant in a village called Butiaba on the edge of Lake Albert.  When I got my day going, Ronny, the guy working asked me if I was going to bathe.  I agreed that it would be the best way to start my day, so Ronny brought me a plastic 10L empty oil container full of lake water.

That was my shower.

Ronny asked me if I knew were the “bathing room” was.  I had to admit that I did not, so he took me through the dirt to the side of the building where he pointed to a pile of gravel that had a fence around it.  The fence would leave most of me exposed to the street behind, except for an area that was filled in between the crotch-level and breast level.

Ronny left.  I stood in the “bathing room” naked and then got the 10L container of water ready.  Using gravity to my advantage, I started dumping the water on my head to wash the rest of me.  Just as I was finished dumping the 10L of water on myself, I looked into the yard next door and there was a very beautiful woman staring at me.  I realized that she could see all of me naked from that angle.  Her mother was also standing there beside her, looking at me.  I smirked, knowing it was too late, and moved a little to the right to hide my crotch the best I could from them.  As I did that, I nodded at the pretty girl and said, “Hey…”

I finished the job, and toweled myself off, but I felt too bashful to make eye contact with her again…. 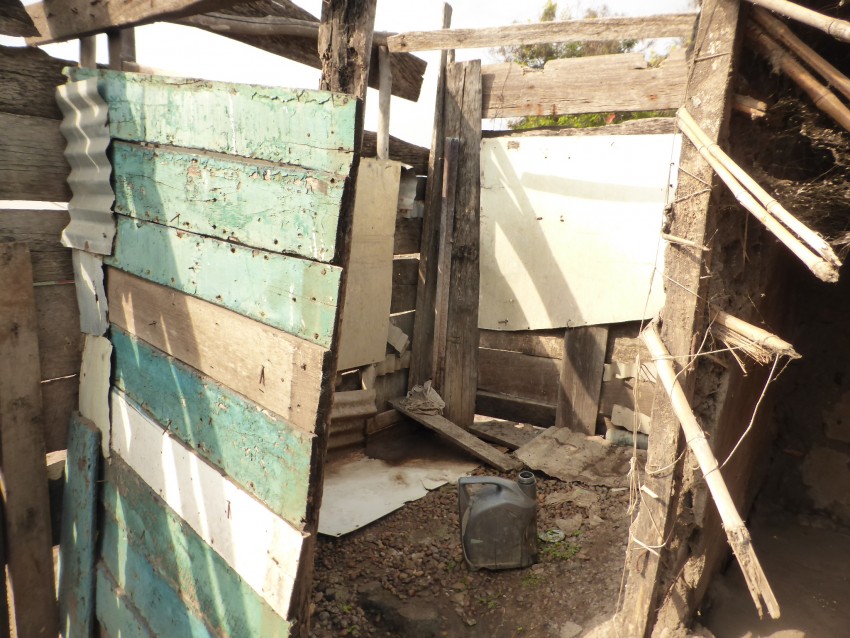 After I was clean, Ronny took me for a walk around town.  Lake Albert is Africa’s 7th largest lake and it is the 27th largest lake in the world by volume.  It is said to have oil underneath of it.  Many kids were down at the lake with jerry cans collecting water for their homes.  But, being kids, most of the jerry cans were on the sandy beach and a group of about 10 kids were having a great time playing in the water.  Small wooden boats lined the shores with nets stretched out behind them from the evening fishing.

A fishing fleet owned by one man.

Ronny and I walked around the shore alongside of the thatched roof houses.  According to Ronny, they use thatch roof structures because they can build them very low to the ground and it keeps the buildings cooler.  My friend said that the winds come from Lake Albert to the shore and the breeze also helps to keep things cooler.  The small houses were wonderful. 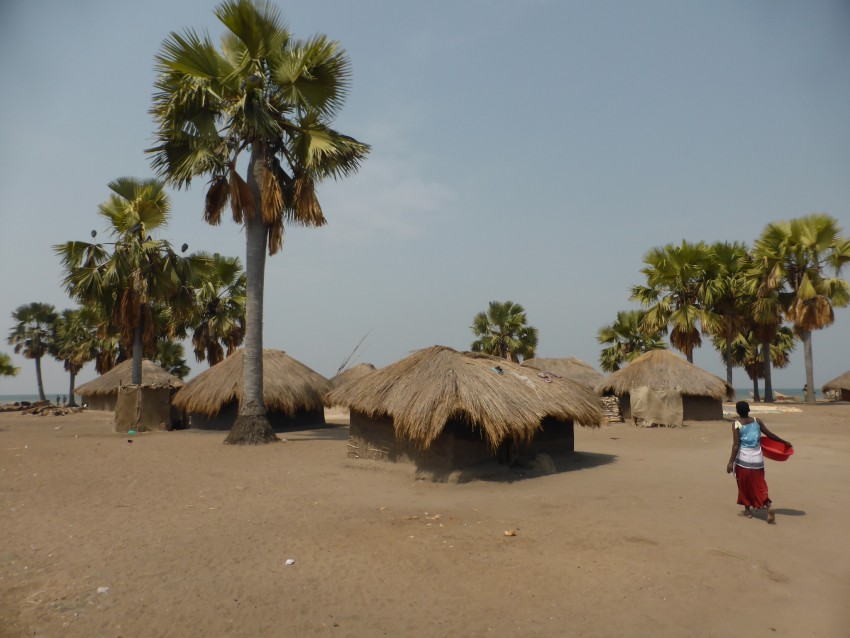 Some children were very interested to see me.  Some were terrified of me.  Ronny was laughing at the kids who would run away and he would say, “Oh, feels some fear of you.”

A little boy of about 7 was in a small boat in a little pond.  Ronny said he was, “Training to drive the boat!”  I went to take a picture of the boy and it scared him so much that he jumped out of the boat, into the water, leaped to the ground and ran for it.

There was a group of adults laughing with Ronny and I at the scene.  The boy dropped his paddle along the run.  The boy was still moving away and was looking over his shoulder at me.  I went to walk past the paddle, picked it up, pointed at myself and said, “Mine!”  I was smiling, but the boy was not taking any chances.  He kept on moving.  It was ridiculous.  Later, a little girl ran away from me with a toy car made out of a plastic bottle because she was worried the that man with the weird colored skin would probably steal it! 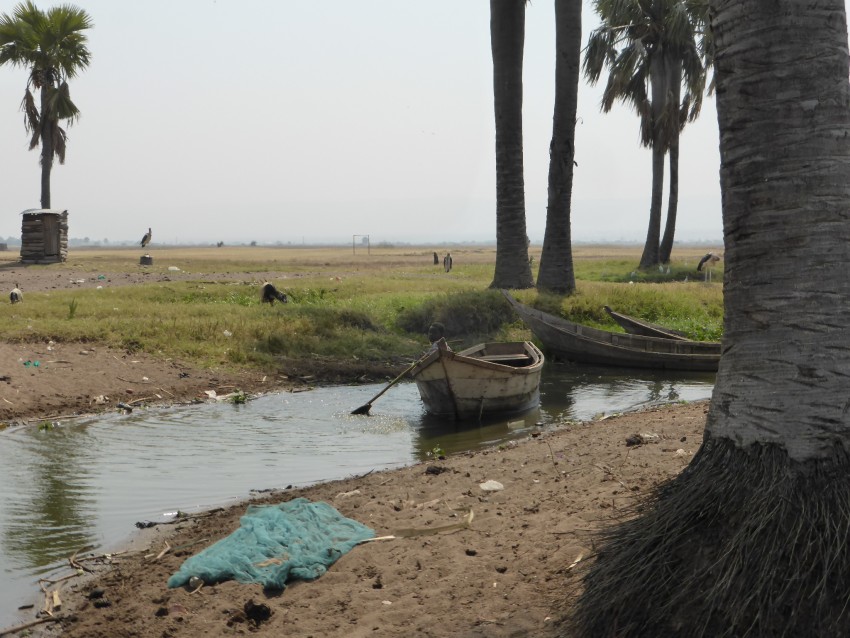 Driver training; little boy about to be terrified!

As I was waiting for people to gather for the car ride, a local man walked past with a pink umbrella shading him from the sun.  The umbrella said, “Always – Absorbs in one second.”  Amazing!
I took Ronny out for breakfast and then decided to head to a bigger center.  I decided to go from Butiaba to Masindi.

I have not had internet for a week and my website has been down.  (Incidentally, when my website was up and running in the US again, it took another day before it was working in Canada and took two days to start working in Africa.)  I had a lot of work to do so I caught a motorcycle to the next village and waited for an hour and a half for a car to fill up with people to drive to Masindi.

The car we were to take was just barely that.  It was actually a scrap heap that still moved on wheels.  The doors barely closed and the back hatch had to be held closed with a rope.  The hood did not close entirely and the windows would not roll up.  There were wires sticking out of all four tires.  When we were driving and had to stop, it was with a skid on one front wheel brake…

National Parks?  Whatever…  Get in cars with locals.  That is pretty interesting.

The car driver was a bad driver.  He was all over the road and seemed to take pleasure in getting as close to pedestrians as he could. He often would swerve at them to make them move out of the way as we drove.  He would actually cross to the other side of the road to make pedestrians, bicyclers, and motorcyclists get out of his way.  It shows a lack of education in Uganda.  I wanted to grab the wheel several times and smack him on the side of the head.  One day he is going to kill someone. 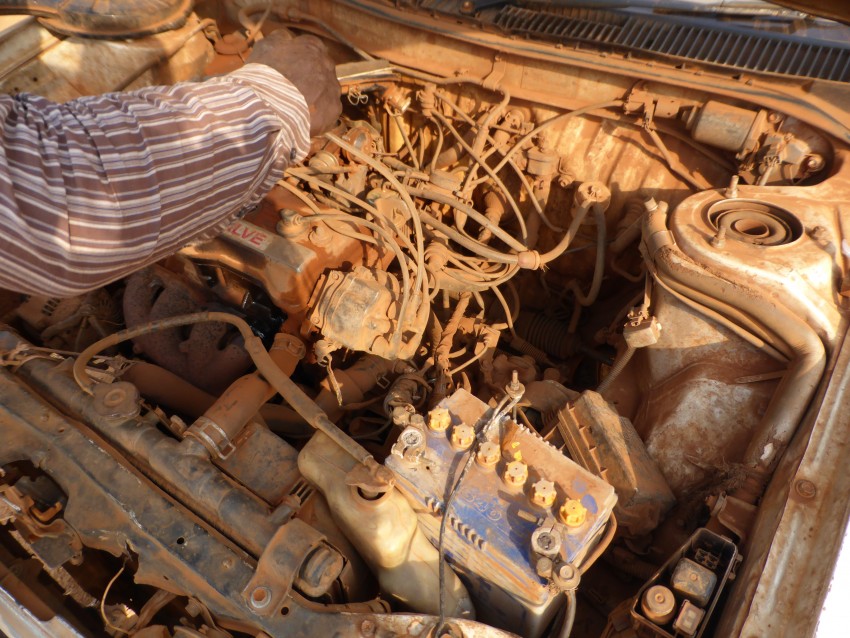 On the drive, the car could not climb a hill, so our driver backed down the hill and got out of the car.  He was under the hood, and got tools out of the glove-box.  I decided to get out of the car because it was hot.  It turned out that he was checking and changing spark plugs.  One of the plugs was fouled so he swapped it for a new one.  When he got the car started again, one of the back tires was in a rut and the car did not have enough power to pull itself out, so all of the people had to get out of the car to decrease the weight.  Another man and I helped to push the car free.  The driver drove up the hill and the rest of us walked to get back in at the top.  In the next town, we stopped and the driver bought a 2L water bottle full of gasoline that he dumped into the tank.  What a drive from Butiaba to Masindi… 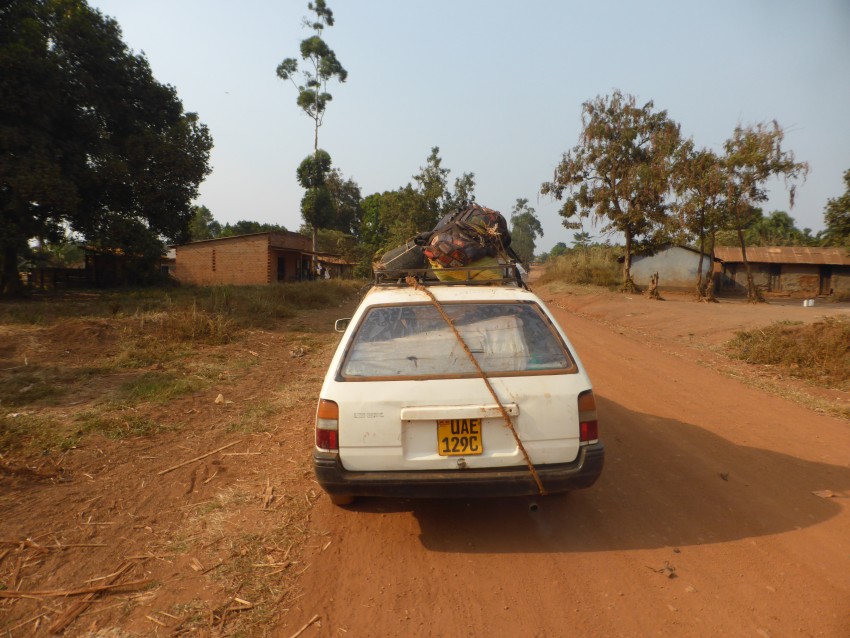 The jelopy to take us from Butiaba to Masindi.

In Masindi, I found several guesthouses/hotels for the same 7,000 shilling price as mentioned at the beginning, but none of them have electrical sockets in the rooms.  I eventually found a place for 20,000 shillings ($5.87) that has electricity and a hot water shower!  Luxury!  Whoa…

I bought a lot of mobile phone data credit and spent the evening on catching up on the last week of this blog.  It is terrible to get so far behind.  It took me 8 hours to catch up, and I was finally in bed at 05:30.  Yeesh! 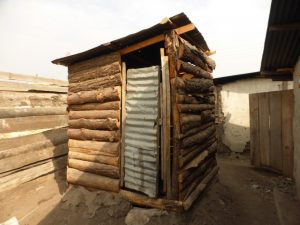 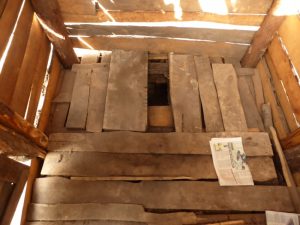 This place is a real shit-hole. 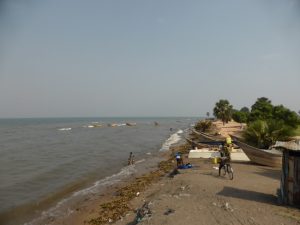 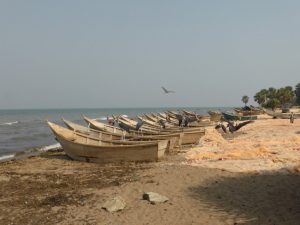 Fishing boats and netting. Giants storks on the hunt for fish scraps. 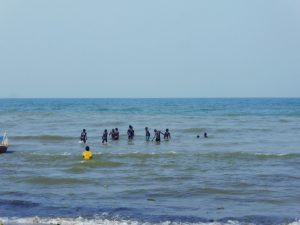 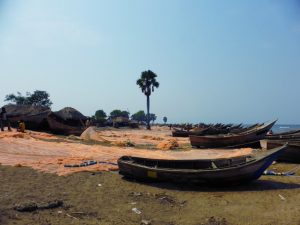 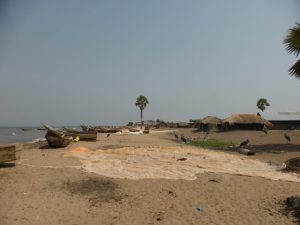 I like the boats, the nets and the thatched roof huts. 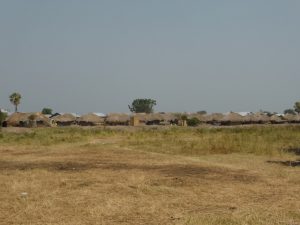 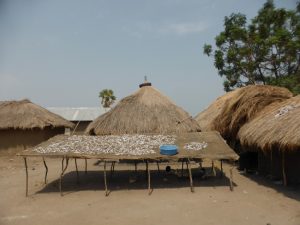 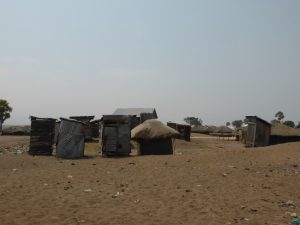 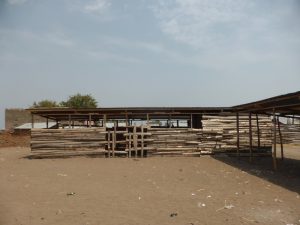 This is the school in Butiaba. 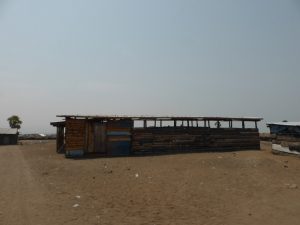 “I woke up in the Ammoti Spice Lodge and Restaurant in a village called Butiaba on the edge of Lake Albert.  When I got my day going, Ronny, the guy working asked me if I was going to bathe.  I agreed that it would be the best way to start my day, so Ronny brought me a plastic 10L empty oil container full of lake water. That was my shower.”
— Life in Uganda
[View All]