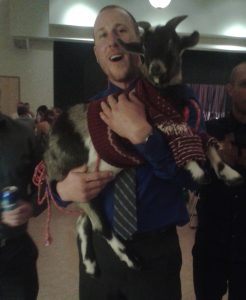 It was a Friday afternoon when Fatty called me and asked if I want to go 50/50 in buying a goat with him for our friend Luke’s wedding present.  Fatty had originally asked Luke if he wanted a raccoon or a badger for the nuptial tribute.  Luke jokingly said, “A badger.”  But, short of time to try to catch one of those, Fatty came up with this other fantastic idea.  Gifting Luke and Kimberlee a goat for their wedding present?  Originality counts for a lot with old buddies at weddings and the inconvenience it would bring them would be immeasurable!  Of course I was in 50/50!

Fatty had talked to a goat farmer, and the man said he had a young male ram for sale.  The farmer told Fatty, “He is young.  He is only three months old, but he has been humping everything in sight.”  Yeah!  Perfect!  That was just the kind of goat we needed.  So after work I met with Fatty and his girlfriend Karlee to go to the goat farmer’s place.  We had a dog-kennel with us in the back of the pick-up truck.  The farmer was a really nice man and he took us to his heard and showed us a really handsome young ram.  The young goat was awesome and even cooler than I could have expected.  Fatty named him ‘Ramstein,’ and we paid the farmer $100.  The farmer gave us some grain for feed, and two small straw bales for his bedding.  Suddenly, we were proud new goat owners.  We put Ramstein in the large dog-kennel and left the farm.

Once we got back into town we dropped Karlee off at the house and then Fatty, Ramstein, and I went to the home of another friend who was having a keg-party.  Fatty walked into the house first and then I followed him in…with our excellent new goat.  Fatty was a few steps ahead of me and when I exited the porch and entered the kitchen, someone saw the goat in my arms and asked, “What the hell kind of a party is this?!”  I put Ramstein down, he took a few steps and then had a goat-pebble-shit on the floor.  We should have first considered that Ramstein was obviously not house trained, but we were too anxious to show him off.  Fatty and I took Ramstein out to a horse trailer and bedded him down in straw for the night with some feed and water.  He was too young to party anyhow.

I worked until 1 PM the following afternoon and was extremely  anxious to finish up for the day.  I raced home to shower and then got into my wedding clothes.  Rushing to meet Fatty, we hustled to our friend’s place so we could pick up Ramstein and were in a hurry to begin the long drive all the way to Saskatoon.  When we arrived in our friend’s yard, Ramstein seemed pleasantly happy in his horse-trailer hotel.  Fatty went to take him out of the trailer said, “Uh, Ramstein stinks…  We are going to have to shower him.”  Fatty looked at me and asked, “…Who’s gonna wash him?”  Well, I knew what that meant; he was clearly hoping ‘who’ was going to be me.  I figured that since it was his idea, I could pay my dues.  Plus, if I did it then Fatty could owe me one someday when I needed him to do something he absolutely did not want to do.  So, I decided to be the goat cleaner…

Fatty carried Ramstein into the house.  The previous evening keg-party in the house was still showing effects.  There were left-over people in the house who had just woken up to start their day and they happened to be really high.  The blinds had been pulled down and it was dark in the place.  That must have been something else for them…waking up really hung over in a darkened room, getting high, and trying to start the day when two guys, one well-dressed, unexpectedly came into the house…with a goat…

I took off my tie, shirt, boots, pants, and socks.  I wanted to keep my wedding clothes clean.  Stripped down the my boxer shorts, I carried Ramstein from the porch into the bathroom of the house and he stood patiently on the floor.  He was such a well behaved little goat; just calm and cool the whole time.  I got the water in the shower to a warm temperature and carried him into the shower placed him under the stream.  He just stood there, and let me wash him.  I was on the outside of the shower standing there naked except for my boxer shorts, and I had a shampooed and very foamy goat standing quite patiently inside of the tub.  Fatty decided to video record the goat washing.  Two guys who were very high sauntered into the bathroom.  One remained at the doorway and the other walked further into the bathroom where our task was taking place.  He looked at me standing there with almost no clothes on.  He looked at the foamy goat standing in the shower.  He looked at Fatty backed up against the wall video recording the scene.  He looked at me.  He looked at the goat.  He looked at Fatty.  Me.  The goat.  He looked at Fatty and asked, “Ummmm, hey….…so this is…….weird, right?”  He seemed to be begging for confirmation…  Fatty laughed and said, “Yeah, this is weird…”  The guy nodded his head and said, “…yeah…” as he turned and walked back out of the bathroom.  Imagine walking into that scene when you are high…

A wet goat shaking himself off in the bathroom after a shower is a funny sight.  It made Ramstein very fluffy.  After he was cleaned and dried, we put him in the large dog-kennel and drove to Saskatoon.  It was a seven hour journey.  That little goat was so well behaved, all through the shower and all through the whole ride.  We arrived at the Radisson Hotel where Robin, the girl I was seeing, was waiting in a room that she had reserved for her and I.  Fatty went for a shower in his room next door, so Robin and I greeted each other, and then headed to Luke and Kimberlee Cobb’s wedding dance once Fatty was clean and ready.

As we pulled up to the venue where the dance and social were taking place, Fatty just put the truck in park, and bailed out to say hello to old faces.  I moved into the driver’s seat and found a parking spot for the vehicle.  Robin and I gave Ramstein some time to roam and munch on the grass.  Then we dressed him in a fancy sweater and a bow-tie.  Robin was walking behind and video recorded as I walked through the dark to the front door of the building where the bride and groom, Kimberlee and Luke, were standing with a small crowd.  I was wearing an awesome ladies mink coat that came to my knees, my dice/flame cowboy boots, and I was carrying a well dressed goat in my arms that I handed to Luke as their wedding gift.  Well, the crowd completely erupted.  Luke was at a loss for excited words, screaming, “A goat?  A goat!  Finally, I have goat!  Kimberlee, we have a goat!  We’ve got a goat!  Mom, Dad, you’ve got a grandchild!”  He enthusiastically yelled out for about three minutes, while hanging onto Ramstein who he immediately renamed ‘Totes McGoats.’  The small crowd was going off and cameras were flashing, taking pictures.

I went to hug Kimberlee.  When I squeezed her I had not seen that in her hand between us that was a plastic glass of whiskey and Coke, which crushed and spilled and all over her wedding dress.  She was shaking her head and started using my mink-fur to wipe off her dress.  I jumped back at first but then realized that it was her wedding dress that had paid the price and my fur would unfortunately have to suffer the consequences.  Sorry mink fur, it was a woman’s wedding dress on her wedding night…  Kimberlee said, “Stephen Harris…that was quite an entrance.”

Well, the goat was a hit.  He was passed around all night and he must have been in 200 different arms, lovingly held and babied.  He put up no fuss and made no mess.  Our friend Jonny best-friended the goat and took care of him for the night, completely ignoring his girlfriend who seemed to sulk for the entire evening after.  It was likely the first time she had ever played second fiddle to a goat.  It was the best wedding present we could have ever given.

When I wake-up called Fatty the following morning, he came to our room with his hands on his head and could only speak cave-man.  Everyone had partied hard all night.  Our little Ramstein had spent the night at our friend Stenson’s house, and in the morning he was picked up by a man from a petting zoo.  So, the future for that gentle soul of a goat will be making children very happy as they hand-feed him and his new petting-zoo friends.  I expect that he will be humping the lady-goats on the side so I guess we gave him a pretty good life.  After lunch I said goodbye to everyone, kissed Robin farewell, and then Fatty and I drove the seven hours back where we had started our previous afternoon, minus one goat.  It was more hours in a truck than it was partying, but it was great to spend time together like that being the boys we have always been since we were kids.  And it is nice to know that we are the still the same trouble and mischief, even after all of these years.