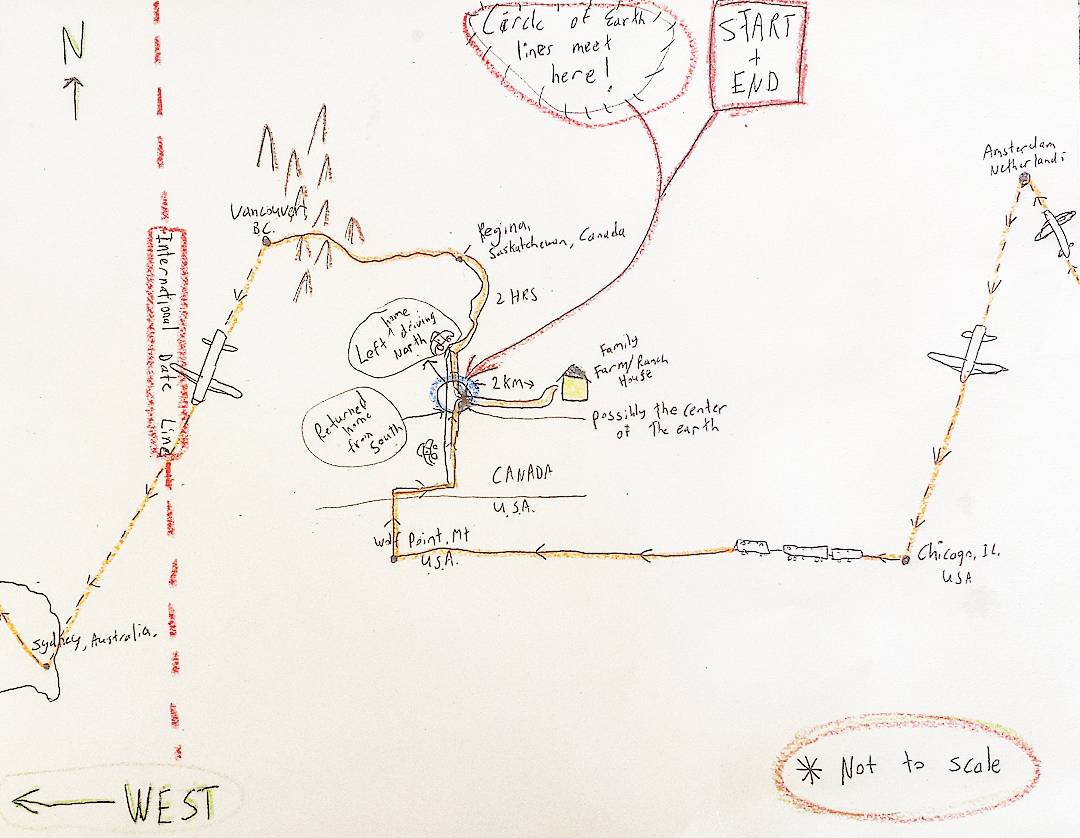 Maybe it is common knowledge but perhaps it is not… I have been thinking about this for the past couple of days and it is likely that no one has had to think about it unless it has happened to them… When you fly around this planet from east to west, you lose a day of your life when you cross the International Date Line. One day full of your life! Poof! Gone!

I was on a flight from Vancouver to Sydney and with a layover, it was 25 hours of transit. In 2007, I left Canada on August 15th, lost August 16th when I crossed the International Date Line during flight time, and eventually arrived in Sydney on August 17th. The 16th of August of 2007 is a mystical day that never actually existed in my life. I know…it is strange to think about… I have lost days to hangovers from five-day benders, but never before had I lost a day due to a technicality of the way man deciphers time.

So, this means that 2007 was actually a 364 day year for me in linear terms, and sort of made me a day younger than I actually was. Essentially, it makes me a time traveler! *
*Also, because of the time change, it was always fun to call my family on a Tuesday from where I was because it would still be Monday at home in Canada. I used to tell my family I was calling from the future. Sometimes I would give them the weather forecast…

My Australian home for that year.

Luckily though, I have made two earth revolutions: one going entirely west that took that mysteriously missing day from me, and one circle traveling east that gave that day back five years later to even me out. (More on that later!) But the most interesting part of those circles is that the lines of those earth revolutions met up at the end of the drive into the yard of the farm where I grew up in Canada.

On the day that my eastern journey started in 2007, it began by leaving my dad’s farm in Big Beaver, Saskatchewan, Canada. When I left the farm to start that trip we drove out of the 2 km lane-way of the farm. From there we drove two hours north to Regina. From Regina, I caught a bus west to Vancouver. I flew from Vancouver to Sydney, Australia, crossing the International Date Line in the process losing the man-time-calculated day of life. After a year in Australia, I flew to Amsterdam.

Following a year in Europe, I flew from Amsterdam to Chicago, USA. From Chicago, I caught the Amtrak train across much of North America to arrive in Wolf Point, Montana. My father drove down to Wolf Point to pick me up as it is not so far from our home in Big Beaver, Saskatchewan. Dad and I drove north to cross the border into Canada and when we approached the lane-way of our farm we approached it from the south. There, at the very end of the lane-way of the family farm, as we went to turned right down the last 2km stretch to the house, my earth-lines met up. It was there at the end of our lane-way that I had officially made a full earth revolution, one day younger.

If that seems cloudy in any way, here is a map that is certain to alleviate any confusion! 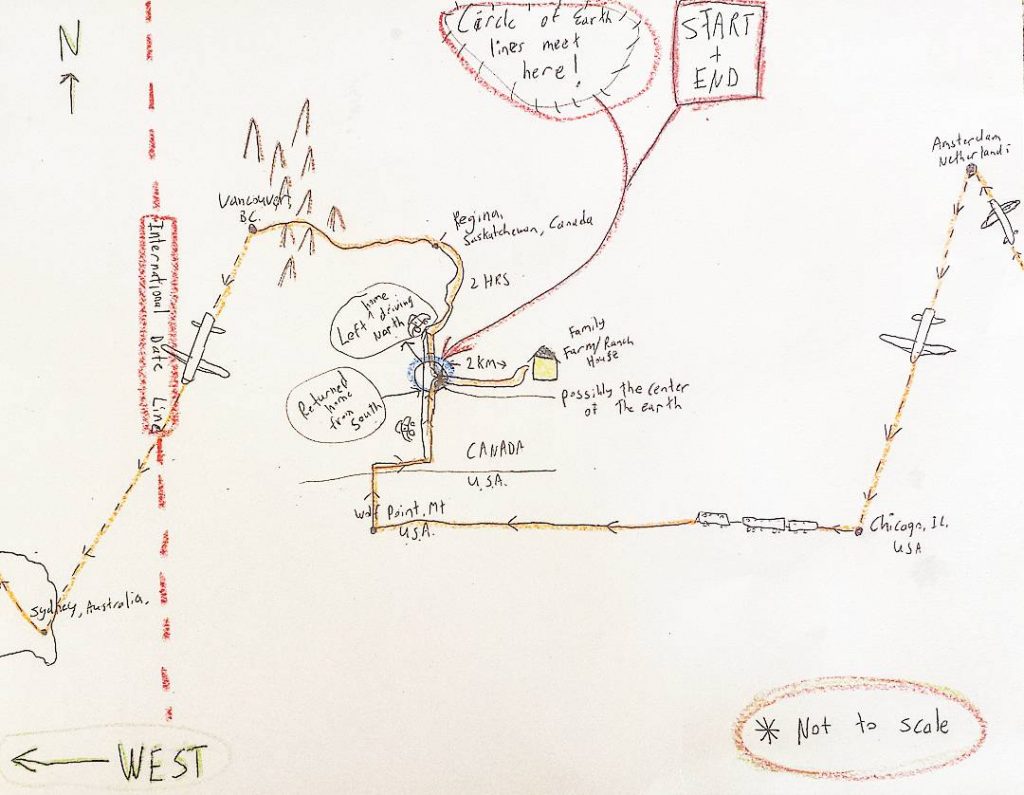 There, that should fix things for you!

It is amazing, as the lines of my global circle that met to complete my planetary revolution could have joined in any place in the world. It could have happened in Regina. It could have happened in Vancouver… But, instead, it happened in a very special place…at the end of the lane-way where I grew up… The lines met where the road begins to take you anywhere else but home. It was there at the end of the driveway that my global circle completed itself. How perfect. That very road had lead me back!  The earth is not flat afterall!

And that lost day that I spoke about and I managed to get that back five years later, just by coincidence of circumstance… This is how I did it!…

Just by chance, I made an eastbound circle of the globe. It was the same kind of thing, but reversed. Once again I headed north from the lane-way of the farm when I was leaving home. I went to Regina where I caught a ride to Edmonton, and from Edmonton, I flew to England where I was living. A year later, from London, I flew to Malaysia where I took a train north to the border and then rode a motorcycle across Thailand.

From Thailand, I flew to South Korea and then another flight to a Pacific Island called Guam. In Guam, I met up with a man who owned a 10 meter sailboat which I helped ocean-navigate to Japan over a 17-day trip. From Japan, it was a flight to Los Angeles, California. From Los Angeles, I caught a train to Portland, Oregon. And finally, from Oregon, a friend of mine drove me across much of America and we entered Canada into southern Saskatchewan. Eventually, we approached the lane-way of my family farm from the south.

Again, at the very end of the lane-way of the farm, my lines met up. A full revolution of the planet had taken place again, this time traveling east! And, best of all while heading east, somewhere between Japan and the US, I crossed the International Date Line again and gained back the day that traveling west five years ago had taken from me!

I am the same age as I am supposed to be!

It seems incredible that both of those full earth revolutions started and finished at the end of the lane-way of the farm in Canada, and that just by chance both of those circles were in opposite directions with one being entirely east and one being entirely west. And the thing about is it that neither of those trips had been planned to end in such a special and beloved place…the family farm in Canada.

The fascination of life is full of bizarre and incredible circumstances.

Earth and time…you and I are even!