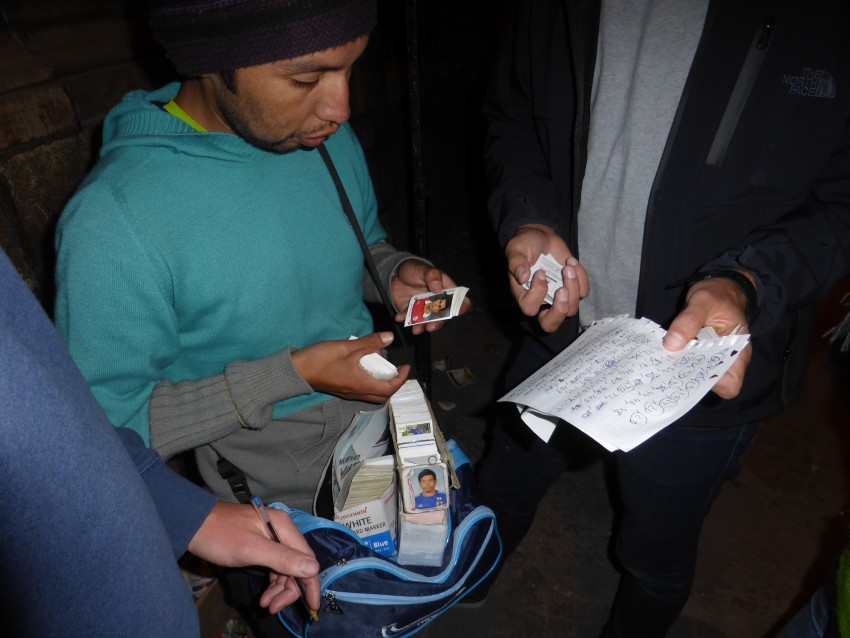 It was a ‘by-myself’ kind of day, and that was totally awesome.  It has been a long time since I fought the Spanish speaking war alone.  And I am terrible at it, but sometimes it is great to just get through it and try to communicate with my  33 word vocabulary without someone interjecting with their more useful and fancy Spanish words.

Roberta was heading to Sucre as well, but I waited her out and let her leave so that I would be separated from her.  Then in the afternoon I caught local transport to the bus station, and sorted out a ticket and headed to Sucre, sitting at the top of the bus right in front of the window.  I was the only gringo on the $3.11 U.S. three hour bus ride which was a real treat.

Here are four reasons why Bolivia is Awesome:
– There road is absolutely stunning and Bolivia is Beautiful.
– There are donkeys grazing on the side of the road.
– There is a hitchhiker about every 2 kms.  Sometimes toddlers are standing there with their mothers, and the little ones have their thumbs out to try to hitch a ride.
– There are sleepy roadside dogs all over the place, patrolling their chunk of highway for about 1km or more.  There are no houses or villages around, just a dog hanging out having a nap roadside watching the cars go by.  Then in about another 1km, there is another dog, napping to patrol his jurisdiction.  I like to imagine that these dogs are Bolivian versions of Lassie, and they will run for help if your car breaks down or encounter any kind of road problems.

When I got to Sucre, I met a Dutch girl and four Aussies.  The Aussie guys were collecting picture cards of players for a World Cup book.  They had spent over $100 U.S. on the cards.  I told them that I found it interesting that they were collecting pictures of men at their age.  Then, they wanted to go to a seedy area of Sucre to card swap with some locals.  I thought it was too geeky to pass up, so I joined the fun.  And it was actually a blast.  There were about 7 guys with boxes of their own cards, wanting to swap their doubles for ours.  I say ‘ours’ because I was totally into it by now and I was helping to sort through sticker cards with some of the weirdest people around.  People who collect things are really weird people.  I am sure one of the weirdo collectors with his greased back hair also collected strange porn and human bodies.  It was a little like buying drugs, as we always felt leery because the area we were in was kind of grungy and dark.  But, I enjoyed the experience and it is amazing how much fun geeks can actually have.  Maybe life’s pleasure are not just about parties, sex, and rock and roll…

Bolivia is Beautiful for so many reasons.

“Sometimes kids in Rwanda said “Ni Hao” in passing today, assuming that since I do not have dark African skin, I must be Chinese.”
— Children in Rwanda
[View All]