I got up at 6am with Irmante and walked her to the bus station.  It was not a sad goodbye at all.  I think we were too tired and still too drunk.  So, we made a quick ‘Take Care’ and I headed back to the hostel to sleep for another hour.  At 8:30am I got on a bus for 10.5 hours from Chañaral to San Pedro de Atacama.  I slept for the first three hours.  Yikes, alone in South America and not able to speak Spanish.  This should be a challenge.

And I would find out that it is about 4 hours into the trip when the bus arrives in Antofagasta.  I got off for a 30 minute break.  I had left my red sweater on my seat.  When I went to get back on the bus, it seemed like the bus driver was telling me that I was getting on the wrong bus to get to San Pedro.  I looked at the bus in front of me, and I seen someone in my seat and a red sweater against the front window.  I sort of had to get past the driver to get up the stairs to retrieve my sweater, and I knew he was telling me that it was not the right bus for me, so I assumed I had to switch buses.  When I got to the seat where my sweater was, there was a guy in the seat I had been sitting in.  I went to pick up the red sweater and the guy looked at me.  It turned out that he had a red sweater too.  I was some psycho guy who got onto the bus and it looked like I was trying to steal his clothing.  I said, “Lo siento..” and backed back off the bus in shame.  I had a look in the yard and my bus was 20 meter away refuelling.

People in South America are very nice people.  They all are nice everywhere we have been.  When I figured out to get on my bus again, I was seated next to Marenka, a 25 year old Chilean.  We visited for hours and I used the pick-up lines from my Spanish phrasebook on her until she was tired of them.  I was having a lot of fun with that. She used to have hair down to her ass until about a month ago when she cut it off to make a wig for her mom who does not have any hair.  She said her mom is beautiful again.  That is super sweet.  Marenka thought that Montreal was in Europe, which made me feel a lot better about knowing nothing about Chile.  Marenka travelled to Finland last year and according to a Chilean girl, Finland is very boring.  There is only 7 hours of sunlight a day in the cold and winter snow.  All the houses are cubes, there are no screams and no honking in the streets.  Finland does not meet a Chilean standard of amusement.

A woman in her 50’s got on the bus from Chañaral to San Pedro de Atacama and sat behind me.  She was blasting Rage Against the Machine, and Iron Maiden into her ears loud enough that I could sing along.  Rage and Maiden in your 50’s at that volume.  Amazing!  I gave her a thumbs-up when she started playing Rage though her earphones and then again when she went to Maiden.  She laughed and liked that.

Marenka told me that when the Atacameños  (people of the Atacama desert) spoke their native tongue, Kuzma, during times of Spanish rule, the Spaniards cut their tongues out.  I think a man could easily hate the Spanish for their work here once enough South American education is gathered.

The road was once again amazing and full of desert contrasts.  There are huge mines along the road.  The land is pushed up in huge piles by machinery in places, and since it is the desert, no one cares, so when the work is finished, whatever excavation was talking place is just left behind.  They just leave the ugly.  There are volcanoes on the way to Pedro de Atacama, and the town is in what was once the bottom of an ocean.  There is nothing growing anywhere, not even cacti, and you get the feeling of what it would like to drive along the bottom of the Pacific Ocean if it dried up.  The earth that is left behind an ocean looks pretty incredible.  There are even small mountain ranges within the massive valley bottom. I checked into a hostel and went to check out the town.  I think this is the kind of town I would like to spend a week or so in.  I wish it was not so ridiculously expensive in Chile.  $18 U.S. per night for a hostel room is a lot.  A meal is about $8-9 in a restaurant.  I am a big fan of $3 meals! 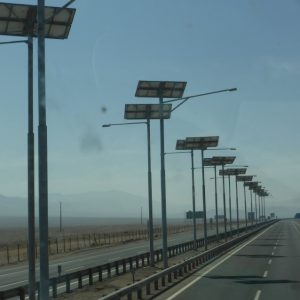 There is no electricity here, so the highway lights all run off solar paneling. 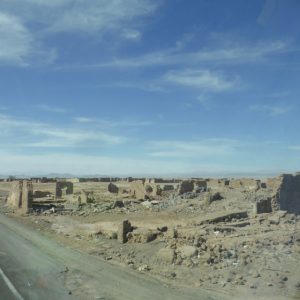 There used to be a town here for a mine, but the work ran out, and the adobe town was abandoned. 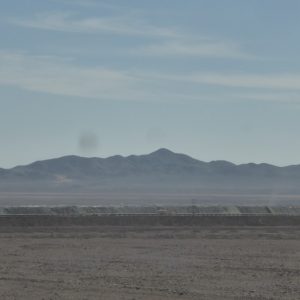 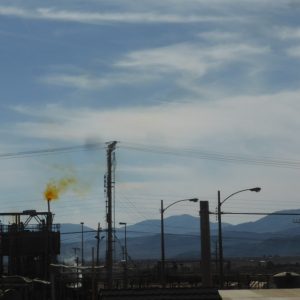 It was the dirtiest colored smoke pollution I have ever seen. 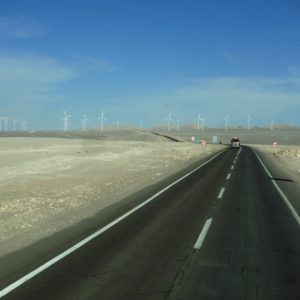 That is a lot of windmills. 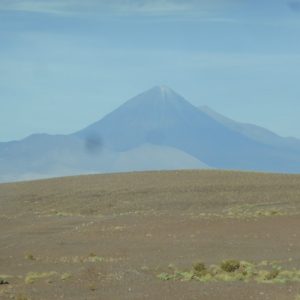 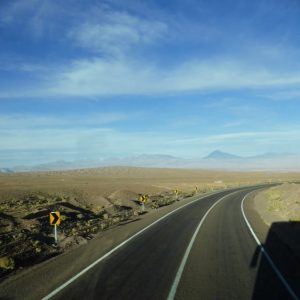 The driest desert in the world. 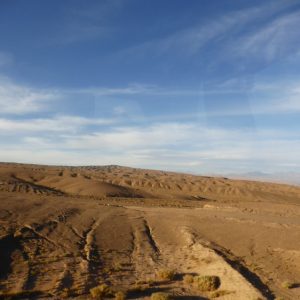 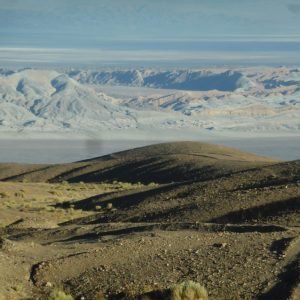 This is a former ocean bottom. There is a small mountain range on the bottom of it. It gives you the feeling of what the bottom of the Pacific might look like. 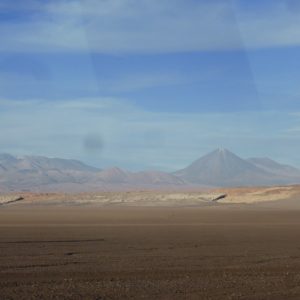 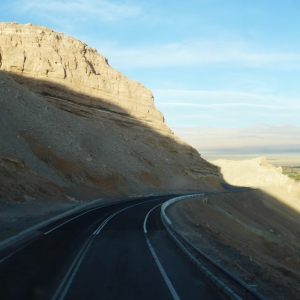 “I have a stiff neck from the dirt-path teeth-chattering countryside journey yesterday.  A stiff neck from a car ride!  As if!  Body, don’t let me get old!  I started giving you greens as a part of your fuel consumption.  I did not want to have to do that, but I did it for you.  Now, be fair…”
— Travelling through Rwanda
[View All]