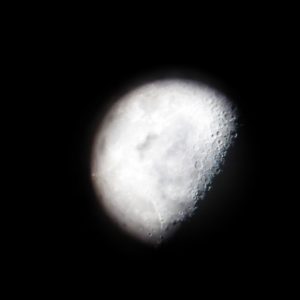 I took this picture with my camera though a telescope during an astronomy expedition. I can not believe how it turned out! 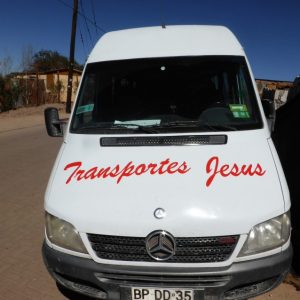 The big man, hauled in a van…

Last night at about 11pm, I signed up for a San Pedro de Atacama Astronomy Observation expedition. San Pedro de Atacama is a very high desert.  The Atacama is the driest desert in the world, there is no light pollution, and the air is very clear, so NASA has been doing things here to observe the sky.  On the San Pedro de Atacama Astronomy Observation expedition, we got to look at Mars, and Saturn through a powerful telescope.  The image of Saturn and it’s rings looked like a drawn picture from a magazine.  We also looked at stars like Sirius and Alpha.  It is amazing how Sirius looks, with red, blue, green, white, colors revolving in a circle.  Gorgeous.  Some of the stars move when you look at them, because of the gases in between your view and their light and the gasses they give off.  Then the moon came out and we could look at the craters on its surface.  It was amazing.  I took a picture through the telescope with my camera.

I took a day off today.  I have been on the move so much that I just wanted a chill day.  So, I just hung out and read some.  I made friends with a Dutch girl and hung out with her in the evening.  We went out for dinner and had a good visit.  She had altitude sickness yesterday and spend the whole day vomiting on a trip around San Pedro de Atacama.  After dinner we had a couple of beer and she developed a stammer, which I really enjoyed because she did not have it at all before she drank.  She sounded like a scratched record sometimes, which I thought was very cute.

We walked home at about midnight.  I decided to just let her go to bed.

“I have zero religion but I have recently found hell. Christians will be happy to know that hell is being trapped on a bus in Quito, Ecuador, stuck in a traffic jam with a bus driver who is blasting Abba´s ´Gimme Gimme Gimme´ at a volume three times what my mother would tolerate.”
— Education
[View All]