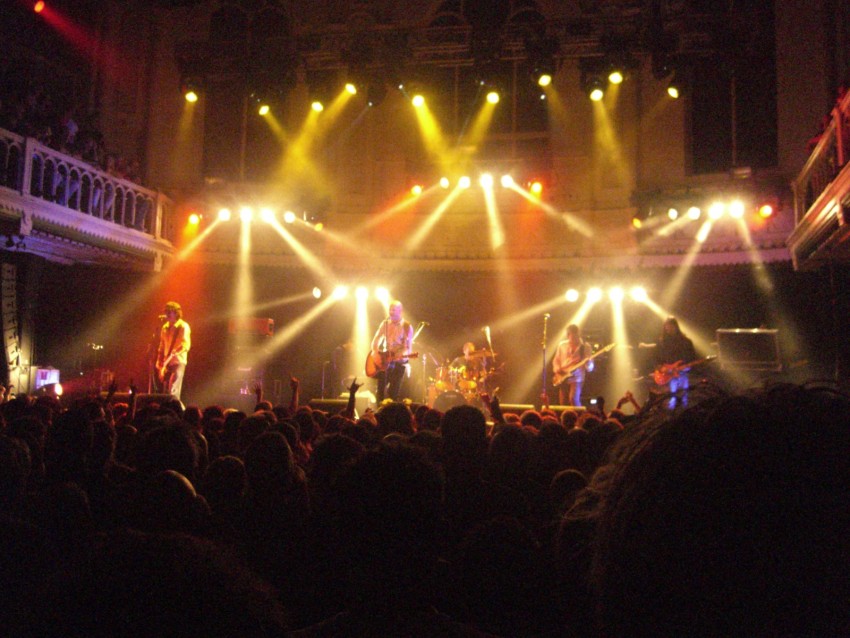 Time is really taking my rockstar heroes.  It took Gord Downie today. Downie was from a Canadian band called The Tragically Hip.  There is a small possibility that you have you have heard their name if you are from anywhere else, but if you are from Canada, and under 50, you grew up with them or you grew up listening to them.  Gord Downie was a iconic legendary poetic rockstar.  Brain cancer, more specifically, glioblastoma, took him.

You will be missed you iconic legendary poetic rockstar.
*All photos from a concert I attended at the Paradiso in Amsterdam, Netherlands.

Sure, there are a few big name rockstars from Canada, but the country usually loses them all to the US and they all seem to end up living in LA after they gain success.  Who can blame them for embellishing in a more temperate climate…  But the Tragically Hip, who have been around since 1983, could never break through commercial success outside of Canada.  But they have been selling out 17,000 seat arenas within Canada for over 30 years.

I once got to seem them in Amsterdam with about 2,000 people in a small venue called the Paradiso because the only people that know who they are outside of Canada are Canadian ex-pats and a weird collection of rogue Dutch fans.  Other Canadian Tragically Hip fans spread through Europe fans caught trains from as far as Paris for that small show in Amsterdam.
(Psst! – The journal entry of that evening is at the bottom…)

Because the Tragically Hip never blew up outside of Canada, they always felt like our own.

They were our amazing secret.

Sometime in the early 1990’s the Hip realized they had a niche to fill and started writing their songs with very Canadian themes.

I first found The Tragically Hip because of my brother Danny.  In his pick-up truck I found the ‘Fully Completely’ and ‘Up to Here’ albums dubbed on each side of a blank cassette tape. The names of the album on each side was written in pen, as it was done in those days.  I was quite young and I was trying to figure out what Fully Completely/Up to Here meant. I guessed the cassette did not have any more room left.

Those two records, Fully Completely, and Up to Here, are still my Hip go-to albums today.

Both albums are front to back and there is no need to skip any song on either album. They are incredible albums.

When Gord Downie found out that he had brain cancer last summer and knew he would not live long, the Hip scheduled a tour across Canada immediately and played 15 shows across the country.  They wanted one more run for the fans.  The Prime Minister of Canada was wearing a t-shirt and partying at the last show they would ever play, in their hometown of Kingston, Ontario.  That last ever concert was broadcast on the CBC and 11.7 million Canadians watched from their homes and from packed bars.  11.7 million people is roughly 1/3 of Canada.

Yes, 1/3 of the nation watched that last concert together.

This morning Gord Downie’s death was announced.  I was really proud of Canada, as nearly every radio station in the area where I was where I was, said, ‘Shove it!’ to Camcom.  Camcome is in charge of radio programming in the country and dictates what will be played.  Seemingly all of the DJ’s were in mourning and they played The Hip…all…day…long.  The entire nation of DJ’s had a, ‘Screw it.  I am sad.  What are you going to do, fire me?’ attitude and played their favorite Hip songs they chose themselves from the 14 studio albums.  All you really got to hear on the radio today was Tragically Hip.  It was amazing.  I have never seen that before, in any country, with any artist…

I have not felt very Canadian for years as I have been gone for so long.  Actually, I feel like a stranger in my own country as time has changed so much.  But, I felt quintessentially Canadian today.  I truly felt it.  I felt my roots.  I mourned with the entire nation.

This is my favorite song Tragically Hip.  It sounds nothing like most of their music.  This piece of work is a real gem…

The acoustic guitar is just so great.  Listen to how much fun the guy playing is having.  It is a blast for him.  It is certain that the guitar that brought me into the song for the first time, but then I heard these lyrics…

Good, huh?  But, I found this video below today as well…  If you never got to see The Tragically Hip in concert, this is what you missed.

Gord Downie at his art…
This will bring you smiles.
Take 4:28 and enjoy this man. He was so entertaining on stage doing his thing…
A real treasure has been lost.

Gord Downie may be the best frontman that I have ever seen in my life.  He was so awesome and distracting that you could probably see the rest of the band on the street outside of the venue after the show and you would might not even recognize them because you could not stop watching Downie on stage.

I think even the parents of the rest of the band members watched Gord Downie when they went to shows.

Below is my journal from the night I got to see The Tragically Hip play in Amsterdam.  I am so grateful that timing made this evening happen in my life…

17 November 2009.
Amsterdam, Netherlands.
I went to work at 10 AM very tired.  Had a couple of 45-year-old long hair stoners at one of my table at Hard Rock Cafe.  They said they have been to 12 Cannabis Cups.  They must be single.

I met Nadine at 6 PM and raced back to the Paradiso for The Tragically Hip concert.  On the bike ride on the way there, I was telling her about the Cannabis Cup and some guy overheard us as he was walking down the street and he yelled to us, “That it is a great time.”

People were lined up so we stood by the Paradiso hunting for spare tickets.  Some girl asked me if I had been in Hard Rock earlier because she recognized my Russian had.  Cool.

I paid €35 for Nadine’s €25 ticket and €30 for mine from people in the line-up.  The Tragically Hip played a three hour show with a set break in between.  There were many Canadian ex-pats in the venue, but a surprising number of Dutch people.  The Paradiso was completely packed with maybe 1,500 people.

The balcony and main floor of the Paradiso in Amsterdam.

Gordon Downie, the lead singer of The Tragically Hip, is a great entertainer.  He is a clown/funny man who moves a little like a humourous Michael Jackson might.  Gord Downie is very good on his feet!  The stage looks a little like a theatre play and he is the main actor.  He was so good that I was unable to pay any attention to any of the other musicians because Downie really drew us in and he made us laugh.  He even crowd surfed.  Very cool.

Gord Downie is a man who loves to make scarves being thrown at him by a roadiefrom the side of the stage, a part of his performance.  He danced, dived, dodged, and made characters out of scarves, the entire time he sand.  It was a totally awesome show.

Canadians at the show in Amsterdam.

Nadine and I went to HRC and got free food and drinks for showing up.  I needed to take Nadine there because many people I work with have never got to meet her.  I introduced her to her first piece of pumpkin pie, and then we went back to my house.  There was a huge party on the roof of my apartment building, so we went there for a half-hour.  I met a guy from Romania who said that he is from Transylvania.  He told the Dracula mean Satan in Romanian.  Wow!

Set One:
New Orleans Is Sinking
The Depression Suite
Twist My Arm
It’s a Good Life if You Don’t Weaken
Fireworks
Morning Moon
Locked in the Trunk of a Car
The Last Recluse
Fully Completely
Poets
Love Is a First
Set Two:
Courage (for Hugh MacLennan)
Coffee Girl
Fiddler’s Green
The Last of the Unplucked Gems
Gift Shop
Ahead by a Century
In View
At the Hundredth Meridian
Long Time Running
Family Band
Grace, Too
My Music at Work
Encore:
The Lonely End of the Rink
Blow at High Dough

Look at that guy! Those locks from that Amsterdam show! I wish I was still rocking those!

“The whole echo experience made me wonder how well sound travels.  It goes to the other side of the canyon, which is kilometers away, and comes back with an average ‘Africa to North America Skype call’ delay.  But, does it travel downwards as well?  Would people in the bottom of the canyon hear me as well?  Would the people on the other side hear the same volume of audio as I could hear on my own echo return?  I wished I had two clones and some walkie-talkie’s (what a word, clearly invented by a genius!) that I could have strategically placed – making them do the hard work of crossing the canyon and climbing down the canyon – so I could have tested where my yells were going with them.  And, if they were clones, they would understand what I was talking about in my crazy yells.  The problem with them being clones though, is that they might have used the same charming tactics on me to get me to go to the other side of the canyon or to crawl into the canyon to yell yells at me instead….”
— Pondering Audio and Clones in Namibia
[View All]