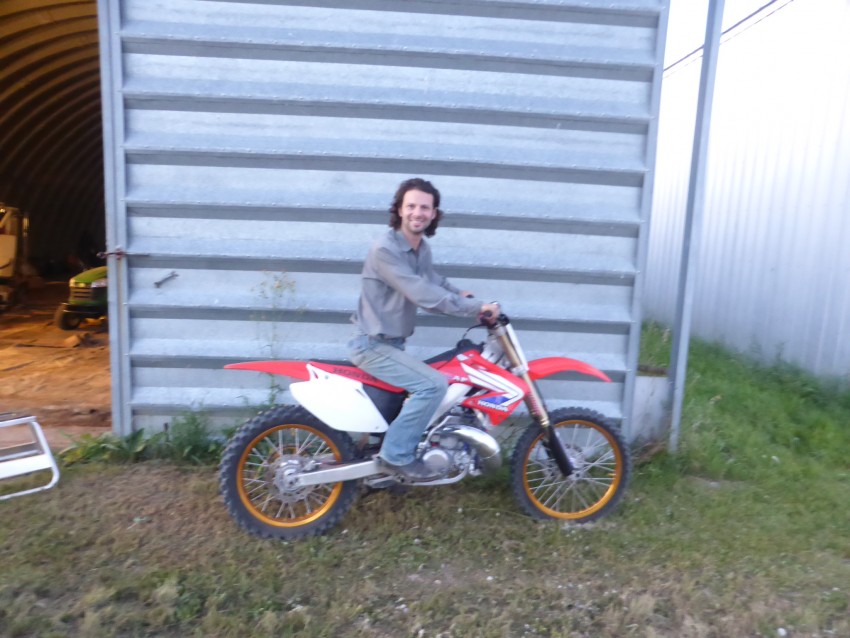 A slice of my past!

Becoming a farm-kid again is a transition that seems natural, but in a way it is a slow process.  I am out of practice and out of farm-kid shape.  I have the calluses of a writer.

In the evening I went to see my friend Chad in Bengough.  I got to his house and he had two motocross bikes in his garage.  I couldn’t resist.  I spent about 15 years on bikes like those, but I have not been on a real motocross bike in 12 years.  Those bikes are like having a rocket between your legs, and not just the heat you are packing.  Those bikes have an insane amount of power.

There are not a lot of things that I can brag about that I am really good at, but I am a good skier, I am good at sex, and I used to be able to ride a motocross bike like it was just an extension of my own body.  I used to be really good on a bike.  I still am to some degree, even when I am riding a scooter in Asia or whatever, those skills still translate.

However, I have been cursing my motocross skills for years.  When I was a boy I had both a really awesome motorcycle and a really awesome guitar.  Only one could take up all my time.  Unfortunately, I used to get off the school bus at 4:30pm and I would ride my motorcycle until dark every single night.  My guitar playing suffered.  What sounds like more fun, riding the shit out of a motorcycle, or making your fingers ache trying to learn how to make an ‘F’ chord.  As a result, today I am awesome on a motorcycle and lousy on a guitar.  If I could make one change to my life, it would be to inverse those two skills.  It is convenient to have keen ability on a motorcycle so that when I am on a bike in Thailand, I can handle any situation.  I can also play a few songs on a guitar.  But, I would much sooner be lousy on a bike, but be able to play the hell out of a guitar.  There is not enough motorcycle in my life today to justify being a shitty guitar player.  So, I am resentful of my motorcycle skills.

I went to Chad’s house and we got the bikes ready and I rode the shit out of his 2005 CR250.  It was F U N!  I think in about two days of riding I could bring my skills back up to snuff.  I could feel that I could still ride well, but I did not have the nerve that I had 12 years ago.  My brain is not comfortable doing things that look nearly impossible that are very possible on a motocross bike.  It would take time to rewire my brain to erase fears.  But, I can say for sure that being at the back of the throttle in 5th gear with your front tire off the ground, pulling a wheelie doing 60mph is still an incredible feeling.  Wow those bikes are still fun.  Resentment lifted for the evening!

Chad says it best when he says that riding motocross is the most fun you can have with your pants on.

We spent the rest of the night drinking beer and listening to memory country music that we grew up on in the 1980’s and partied to in the 1990’s.  What a great night, hanging out with an old buddy, drinking and singing old country music until 3am, reminding each other of times of our lives.  Awesome!

I need to buy a Waylon Jennings t-shirt.

Chad slept in his house so I slept in his fancy luxury camper.  It is a ‘Cougar.’  I like that Chad sleeps in a Cougar every night that he is on the road.

I would like to learn to cover this song.  It is a beauty.  It reminds me of riding around in the pick-up truck while fixing fence on the ranch with my dad while we listened to country music one of the two radio stations we could pick up, both of which were country:
http://youtu.be/0H_rr9m9jaE

“I met a Spanish guy a couple of weeks ago who told me he does not watch football/soccer because he does not see the point in 22 men chasing around one ball.  He thinks that everyone should have a ball and then no one will be mad at anyone.”
— Education
[View All]