It took us a while to get out of the house.  Everyone is exhausted.  We have been hitting Mexico City hard for about two weeks now.  Eventually all three of us were ready.

My date from last night had asked me what I was planning to do today.  I told her that my friends and I were going to visit Santuario Nacional del Angel de la Santa Muerte, which is a church dedicated to the Mexican skeleton saint.  She told me that I should be very careful if we head into that area of the Mexico City.  She said that she has never been there because it is too dangerous. 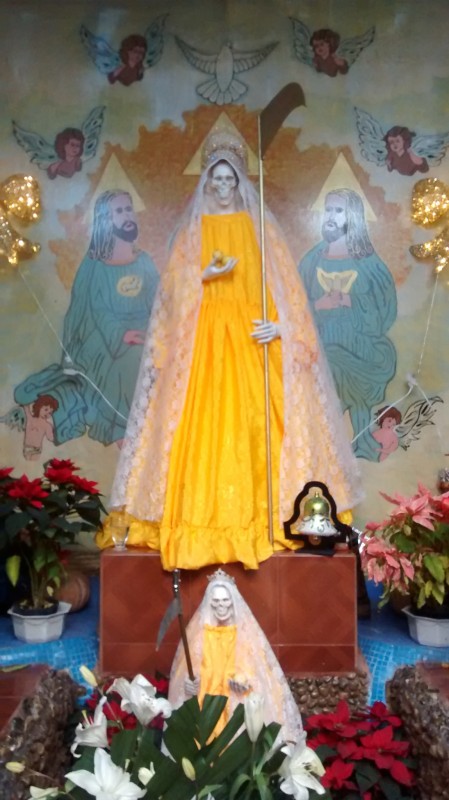 I like the images of the skulls in blending in with the images painted.

This afternoon, Irmante and I checked the street map and realized that it was four blocks to walk from the Morelos metro station to the Santuario Nacional del Angel de la Santa Muerte church.  One street on the other side of the church is Topito, which is said to be the most dangerous street in all of Mexico City.  Irmante knew about it already from having a driver take her through Topito neighborhood.  Between the two of us being informed of the same thing, we were considering not going to the see the church, nervous of what we have heard about the area. 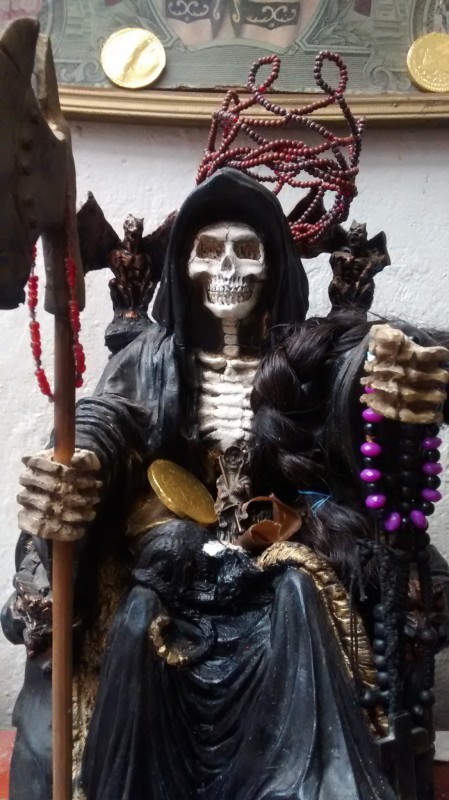 Then Irmante found the website of Santuario Nacional del Angel de la Santa Muerte, and found out that they had a scheduled exorcism earlier in the day.

I sure wish we could have been there for that.  They also have a mass for prisoners…

We needed to go to see this place!

We decided we would go and we would leave all of our valuables in the apartment except for a few dollars worth of pesos.  We caught the metro and make our way to the area. 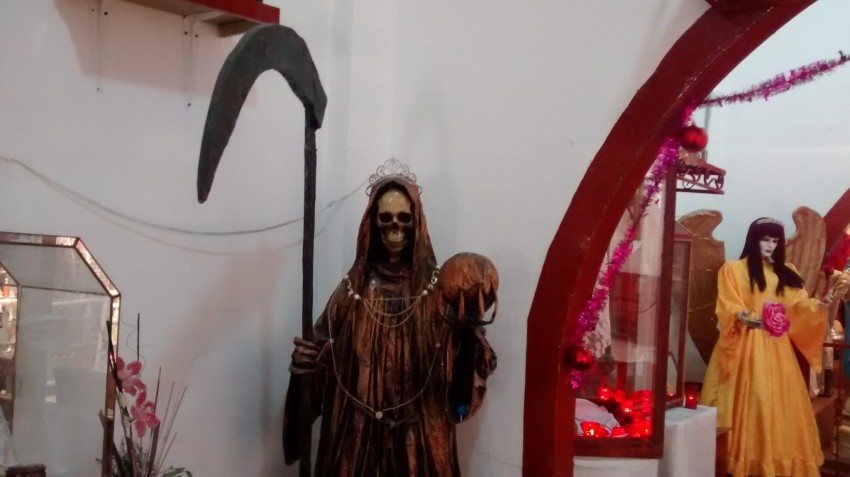 The imagery is so strong.

It sucks living in fear.  Had we not been provided with any previous information we would have just went casually.  We would have felt a bad energy in the air if there was any and we would have planned things accordingly from that moment.  However, we were scared of going before we even went.

On the metro, just before we got off of the train at Morelos station, closest to Santuario Nacional del Angel de la Santa Muerte church, a man took off his watch and put it in his pocket.

That made us even more nervous.  All we had for valuables beyond our few dollars was my cheap phone that we were using for navigation. 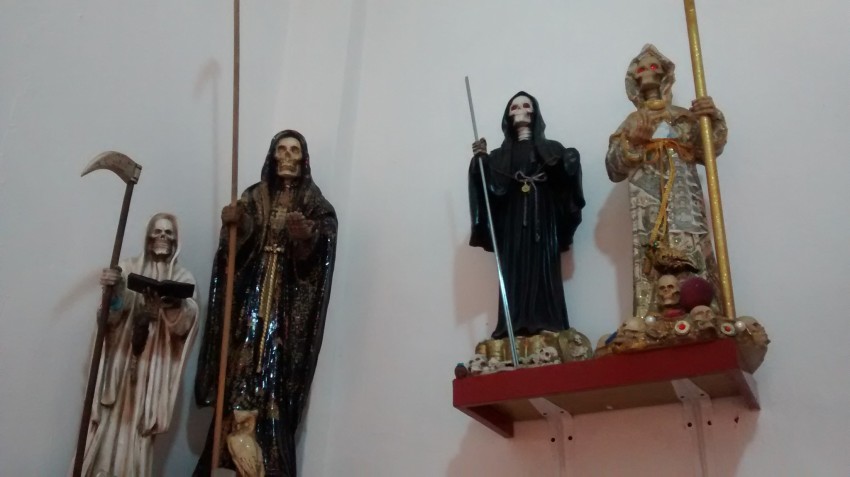 We found Santuario Nacional del Angel de la Santa Muerte, but I was so uncomfortable the whole time.  Even for the task of taking out my phone to make sure we were heading in the correction direction I found myself hiding around corners so that no locals would what I had in my hands.

The front door of Santuario Nacional del Angel de la Santa Muerte is right on the street.  We entered.  It was amazing. 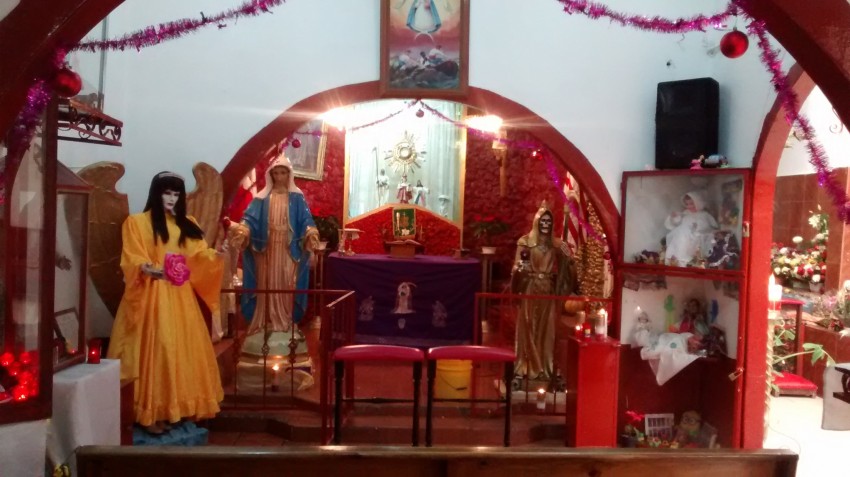 I have never come across an altar like this before.

I was immediately glad that we had made the decision to take a chance and go into such a neighborhood that we had been warned of earlier.

It turns out that Santa Muerte is a retaliation of the Spanish imposing Roman Catholic religion on the natives of the Americas.  I found this on the Spanish website of Santuario Nacional del Angel de la Santa Muerte.

“When the Roman Catholic religion came to American lands, the idea of death was introduced into the liturgy, through the death of Christ for the salvation of men, and with the expiration of saints and martyrs, as an example of a ‘living Good,’ to attain eternal life in heaven. As an inheritance of medieval Europe came the representation of the Danza Macabra (Dance of Death). Since death forms part of the foundations of dogma, the ‘Triumph of Death’ was deliberately introduced. Within the Catholic iconography, whether in the form of dance or under the name of ‘Car of the Cortes de la Muerte.’”

It seems that the deity Santa Muerte (Holy Death) is the offspring of Catholic repression.  The religion is to celebrate death in life.  The ‘La’ in la Santa Muerte indicates that the image you have seen in your life of Santa Muerte as the grim reaper is actually a the skeleton of a female figure.  This was a brand new realization for me. 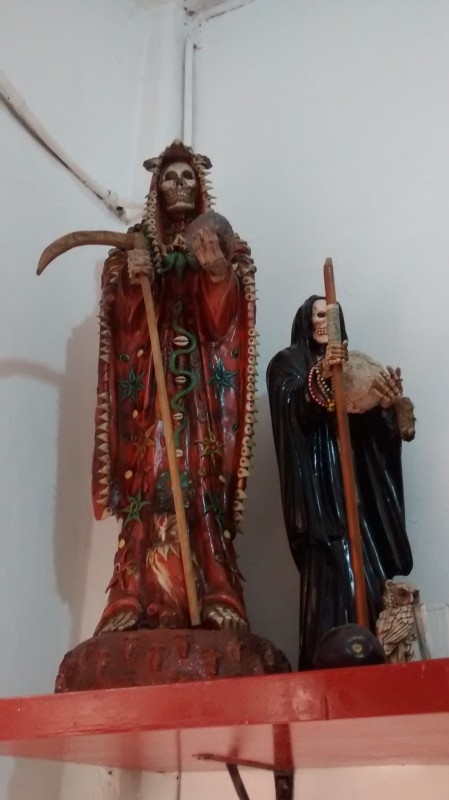 Santa Muerte is responsible for the safety, protection and delivery to the afterlife by her devoted followers.

I do not pretend to know any more than this, but here are some more photos from inside of Santuario Nacional del Angel de la Santa Muerte: 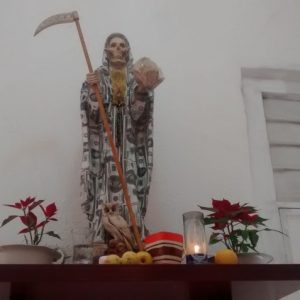 Interestingly made with USD… 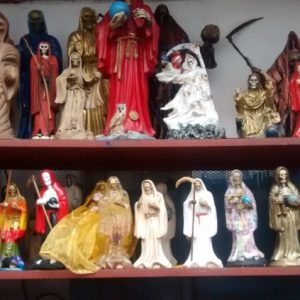 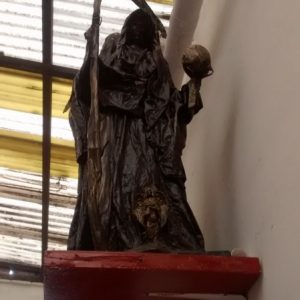 Dark. But maybe we are just brainwashed to think as such… 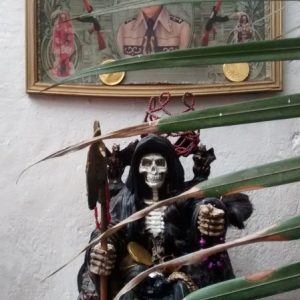 Santa Muerte, is there, waiting for you behind the fern! 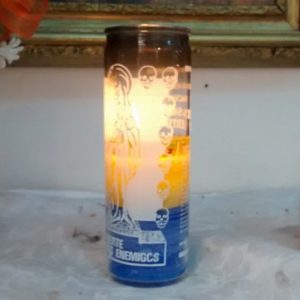 The candles were covered in images of Santa Muerte. 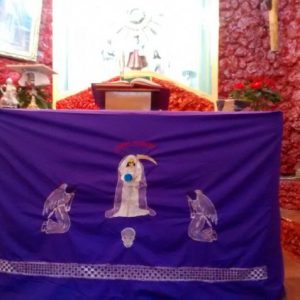 That is quite a flag. 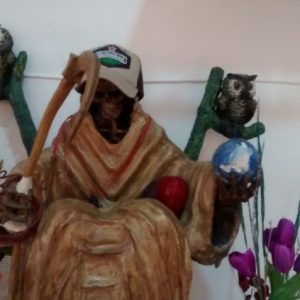 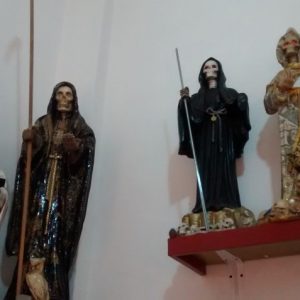 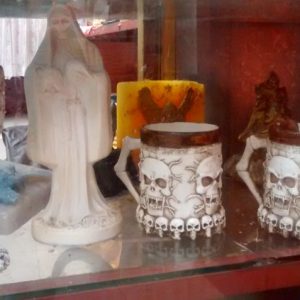 That would be a coffee cup for discussion at the office. 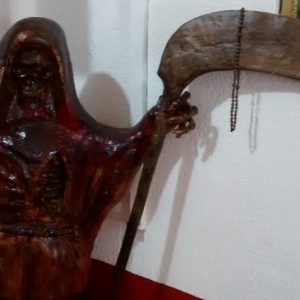 It is hard to get a photo that represents the power of the actual statues.

After finishing in Santuario Nacional del Angel de la Santa Muerte, we decided to take a chance and walk to Tepido.  Clint and I have never seen the street before and I just wanted to be on the most dangerous street in Mexico City for a moment to see what that feels like.  I would not have made a special trip to go and see it, but we were only a city block away, so I wanted to make a loop to it, walk up two blocks and head back out to get to the metro station Morelos.

We had no idea what to expect and we were still nervous approaching Tepido.

Once we got to the street, it felt okay.  We walked down the street for a couple of blocks and realized there were woman and children walking around by themselves.  And there were awesome little stores that sold really cool clothes for very little money.  I bought a Motörhead shirt for $4.20 and a really nice dress shirt for charm women for me for $7.50.  Irmante bought the coolest tights anyone has ever seen.

We were totally cool walking around and I did not feel any less safe in Tepido than I would feel anywhere else in Mexico City, and I have yet to really feel unsafe here anywhere.

People love fear.  Their lives are so boring that they have nothing better to talk about than fear, and fear spreads.  Fear is more interesting to talk about in conversation than comfort.  And, as a result, we were scared out of our minds to go somewhere that felt just like anywhere else.  Had no one spoken to us about the place, we would have never considered it anything different than anywhere else we have been and the idea of danger would have never crossed our minds.  Thinking back before we realized we were comfortable, what were we so scared of, men shoving machetes into our faces in the middle of a busy street of onlookers during the middle of the sunshine coming down on us during the day?

With pre-empted fear, we nearly missed out on a fascinating experience, new information, and really cool new clothes.

Thanks terrified society.  Thanks for continuing to try to make the world a worse place.

We spend over an hour in Tepido and even left the area after we walked blocks down the street to left from Tepido metro station.

I am not saying I want to be in Tepido after dark, but during the day, you are missing a really great part of the city and cheap amazing clothes by being a chicken shit that the rest of society thinks you should be as well.

“Dad told me about a friend of his who drank a lot. He said, “One time someone went to wake him up. The guy waking him asked, ‘Hey...can you see me?’ The drunk guy responded, ‘Yeah...can you see me?’ I guess he thought he’d gone to another world.””
— Partying Somewhere
[View All]