The house got moving around 10:00.  I thought Irmante, Clint and I would tackle the day earlier, but everyone was tired.  Irmante made breakfast and we headed for the Teotihuacan pyramids close to Mexico City. 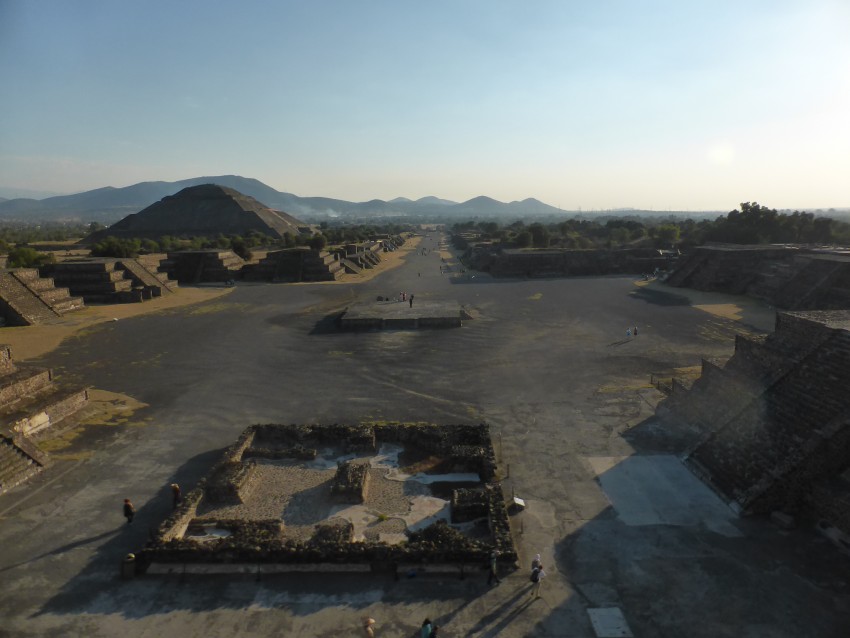 The Avenue of the Dead through the ruined city of Teotihuacan.  Photo from the Temple of the Moon

Teotihuacan was an ancient Mesoamerican city which was the largest city in the Americas…pre-Columbus.  The city is thought to have been of 125,000 inhabitants and was built from 100 to 250 CE.

To get to the pyramids close to Mexico City from the district of Condesa in Mexico City, we rode the MetroBus to Potrero for 5.50 pesos ($0.26), and then we walked through a really dodgy area of the city to Terminal Central de Autobuses del Norte.  It was a huge bus station and from there we caught a 46 peso ($2.30) bus for an hour to Teotihuacan.

Most of the drive is getting through Mexico City itself.  This city is a monster.  It just keeps on going as it lines all the way up the mountainsides in a flurry of vibrant Latin-American expectant colors.

A gorgeous Japanese girl had been waiting in line to get on the bus with us to also go to pyramids close to Mexico City.  I had given her the moniker ‘Boner Maker’.  I had tried to talk to her earlier but she did not speak English.  It is amazing how Asian women travel the world alone, barely speaking any language but their own, and with a big book in their hands they manage to navigate everywhere.  Incredible and determined people…

When we arrived in Teotihuacan, the ancient city ruins and pyramids close to Mexico City, it cost us 65 pesos ($3.25) to get in.  Boner Maker got off the bus where we did, but she did not seem to want to be best friends or kindle the romance that had bubbled in my mind.  I could tell she did not want to because she was in no hurry to acknowledge my existence.  I guess I will not be moving to Tokyo… 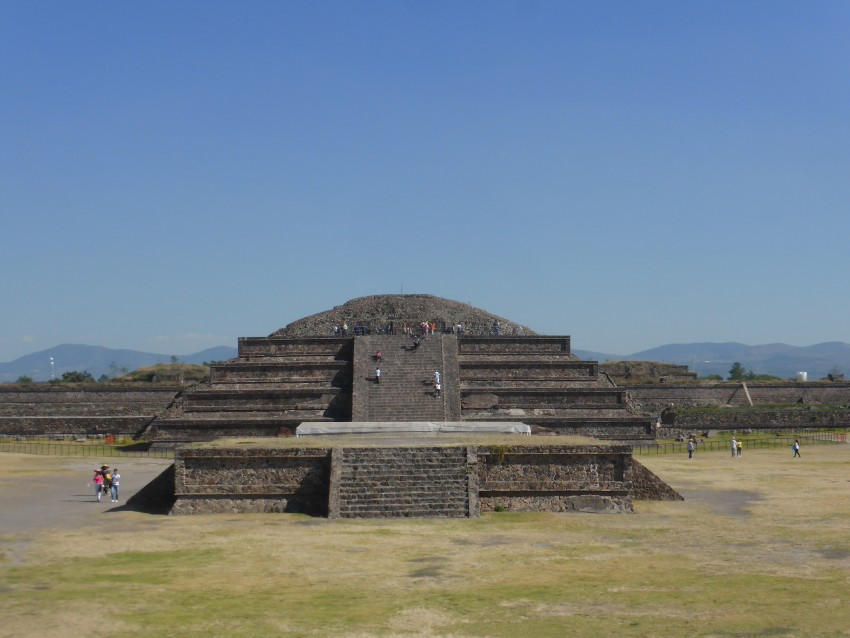 The Temple of the Feathered Serpent.

When Clint, Irmante and I walked into Teotihuacan, we just stood and stared at the majestic force it imposes.  There are three main pyramids on the massive ruins: The Pyramid of the Sun, the Pyramid of the Moon, and The Temple of the Feathered Serpent. 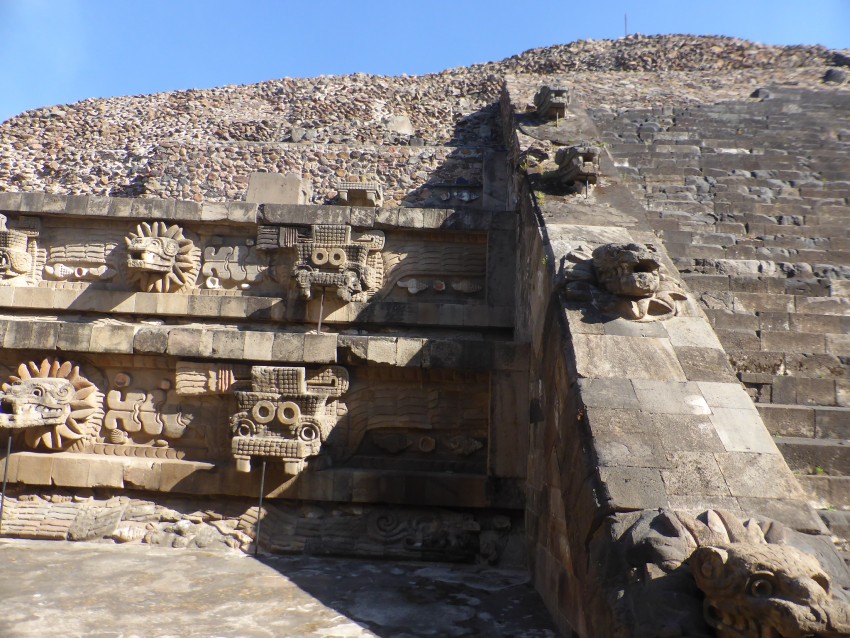 Those figures and heads, made almost 2,000 years ago. Incredible.

Interestingly, the pyramids were named thus by the Aztecs who arrived centuries later.  There is little known about the people who actually built these incredible pyramids and lived in Teotihuacan.

Found on a sign at the Teotihuacan Ruins:
Various human burials dating between 150 and 250 A.D. were found below at the perimeter of the Temple of the Plumed (Feathered) Serpent or Quetzalcoatl. It is believed that the individuals were sacrificed and given in offering at the beginning of the construction of the temple, due to their kneeling position, with their hands tied behind their backs. The majority are men aged 13 its 55, with some displaying cranial, deformities, mutilation and dental inlays. Part of the funeral costume and offering included large collars made from actual pieces of human jawbones and dog fangs, as well as with shell imitations. Other offerings included small prismatic knives, blades and obsidium arrowheads; sea shells; ear pieces and shell disks; slate disks or texcacuitlapillis, worn at the back of the waist, in addition to figurines, cones, collars and ear and nose rings of green stone. 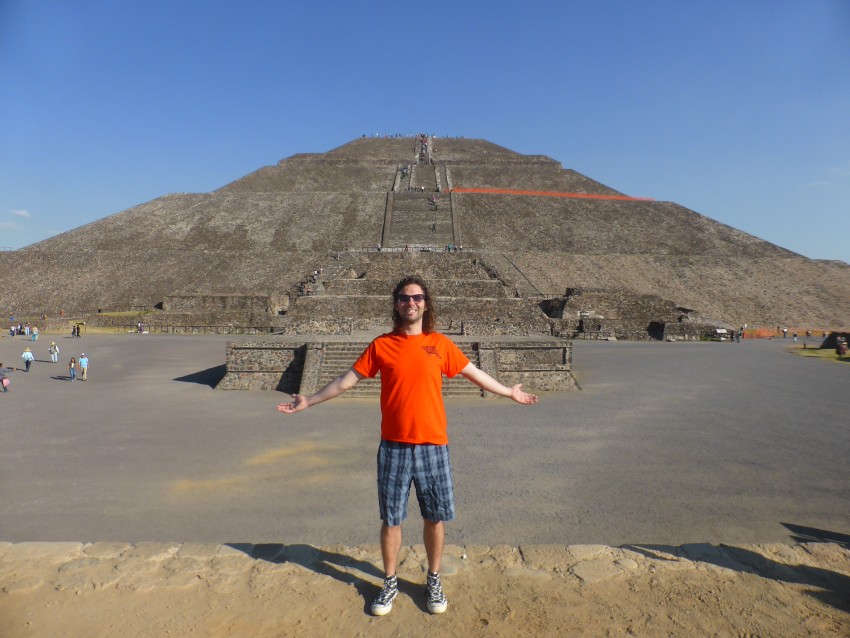 The Pyramid of the Sun.

The Pyramid of the Sun is the third largest pyramid in the world.  (The Pyramid of Giza in Egypt is the second biggest.)  The largest pyramid in the world is the Great Pyramid of Cholula here in Mexico, but in 1594 the Spanish built a church on top of it when they invaded, so it has not been excavated.  The Spanish…Conquer and build a church on top of what was most precious to that newly destroyed culture…

Since the world is not going to let anyone knock down a 400 year old church to excavate a pyramid, so the largest pyramid in the world remains hidden under the earth.  Perhaps in 300 years innovation and invention we will have created some kind of machine that will cut a thin layer of earth under the church to pick it up and move to somewhere else and the pyramid will be revealed to humanity.  I will probably not be interested in the process by the time 300 years pass, but perhaps my descendants will be extremely pleased and fascinated…

The Spanish Inquisition…  Those were despicable people.  The more history I read about this continent, the more I find myself not liking the Spanish, and that is not fair at all today…  It is hard to not feel animosity for their torture and the genocide of the natives though… 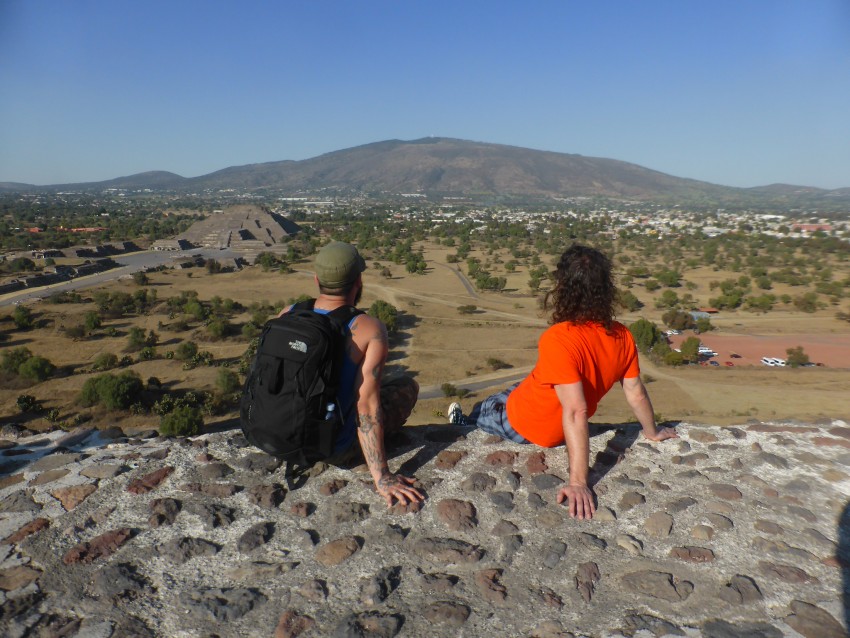 So, we got to marvel at, look at, and climb the third largest pyramid in the world.  There are many smaller pyramids all over the ruins area, but they have also yet to be unearthed.  They pyramids are curious themselves as the insides are filled with dirt and soil.  There are other mounds everywhere in the area. 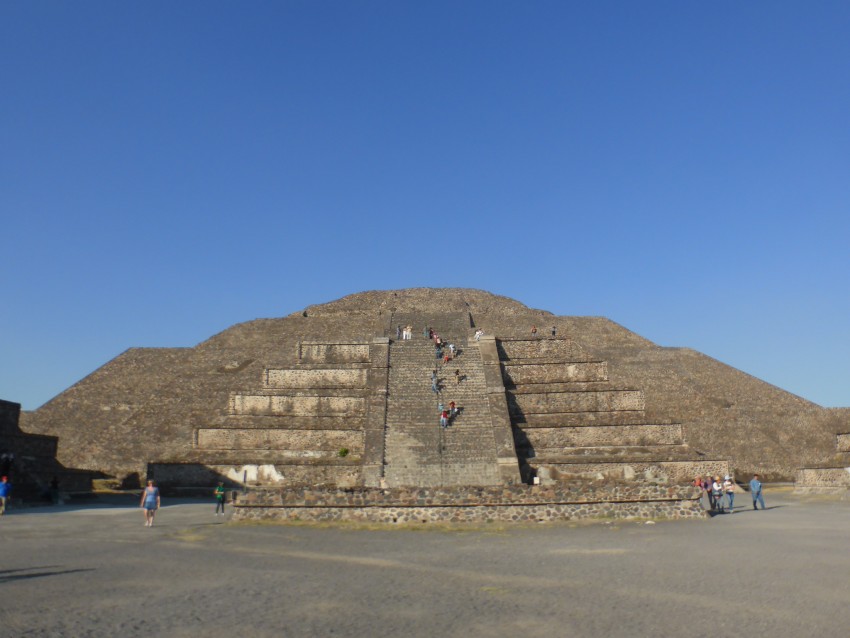 Temple of the Moon.

I climbed on top of one of the pyramids that tourists are not so busy or concerned with.  Alone on top, I felt strange emotion come through me so I asked for the things that I want in life.  I also took a moment to lie down on the rocks in the center of the pyramid to absorb any of the energy that I could.  Maybe it will all come…. 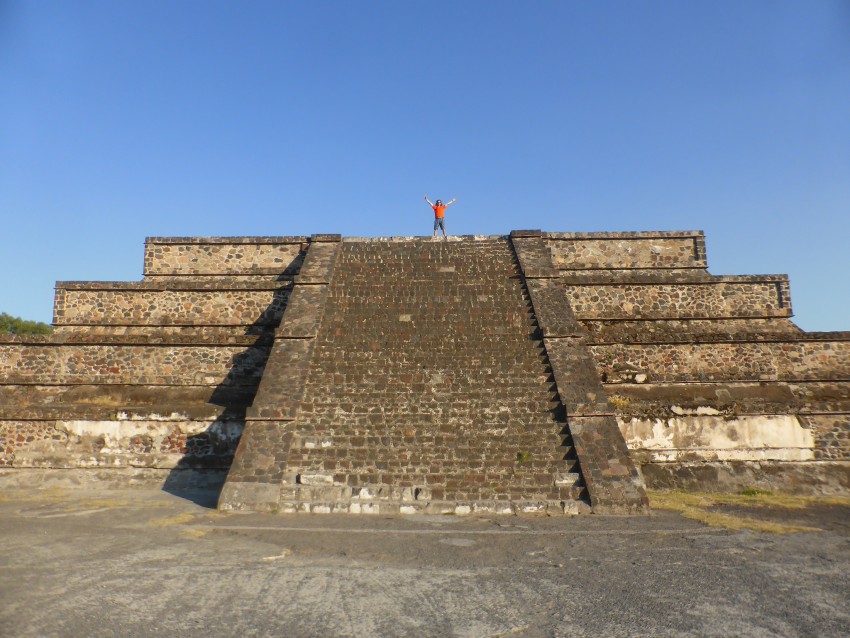 My own pyramid, where I felt an emotion come through my body from the top. It took me 11 seconds to get to the top.

It was a great day and it is truly incredible to peer at ponder at something so precise, built nearly 2,000 years ago in a way that we would be incapable of replicating today with all of our advances in technology.  Ancient societies…so fascinating.

Here are a few more photos of astonishing Teotihuacan, and the pyramids close to Mexico City.  In the peak of its heyday, the city of Teotihuacan was the sixth largest in the entire world: 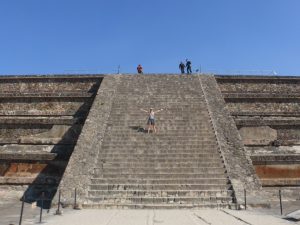 Climbing the steep stairs of the Temple of the Feathered Serpent. 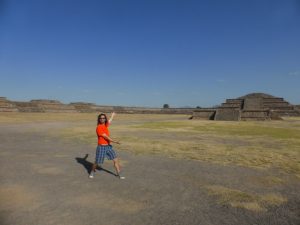 The Temple of the Feathered Serpent. 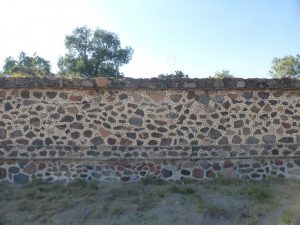 The structure of that wall. Incredible masonry from almost twenty centuries ago. 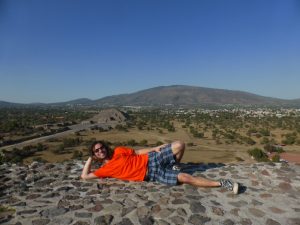 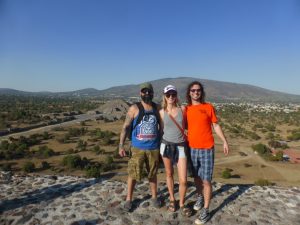 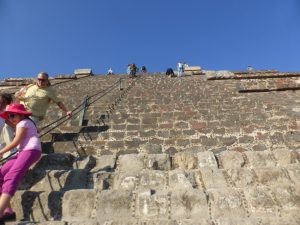 Steep, Steep stairs. Terrifyingly steep. The People of Teotihuacan clearly did not have vertigo.

“After Les and I left the bar we went for a walk up ‘Hooker Hill’ in Seoul, South Korea. Hooker Hill has a couple of dozen prostitutes along it sanding in doorways. Many were attractive, but then Les pointed one out to me who had a comb-over because s/he was going bald. It was incredible. Les and I then got on the subway going in the wrong direction, and then the subway closed for the night before we could get home. So, a drunk Korean businessman took us with him in his cab to get the silly white people home. Koreans are very helpful people. He even paid for the cab.”
— Hooker-Hill/Businessman Culture
[View All]