Why did the Mexican push his wife off of a cliff?
TEQUILA! 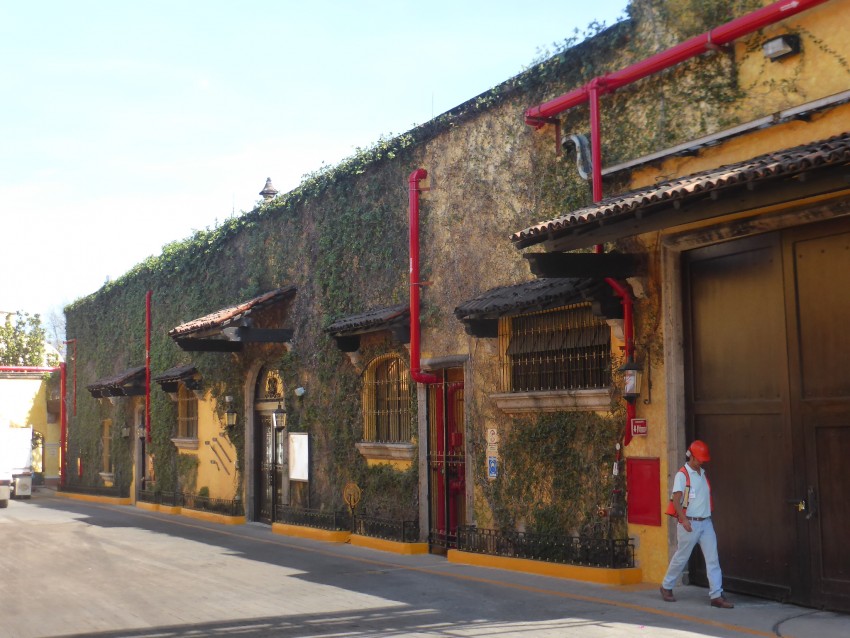 The ivy is nice. And the worker in the hard hat is a nice image.

Jose Curevo has 35% of the tequila market of the entire world.
Over 1/3 of the tequila consumed worldwide is Jose Cuervo and the other 65% is the rest of the tequila brands combined.  They are a tequila monopoly and sell two times the amount of tequila than the second most popular brand, Sauza.  Jose Cuervo is a family business to some extent, as it is majority owned by the Beckmann family.  Don Juan Beckmann is a direct descendant six generations from of Don Jose Antonio de Curevo who began the brand in 1795.  However, in 1989, the Beckmann family sold 45% of the company to International Distillers and Vintners, so it is not the family business that it once was… 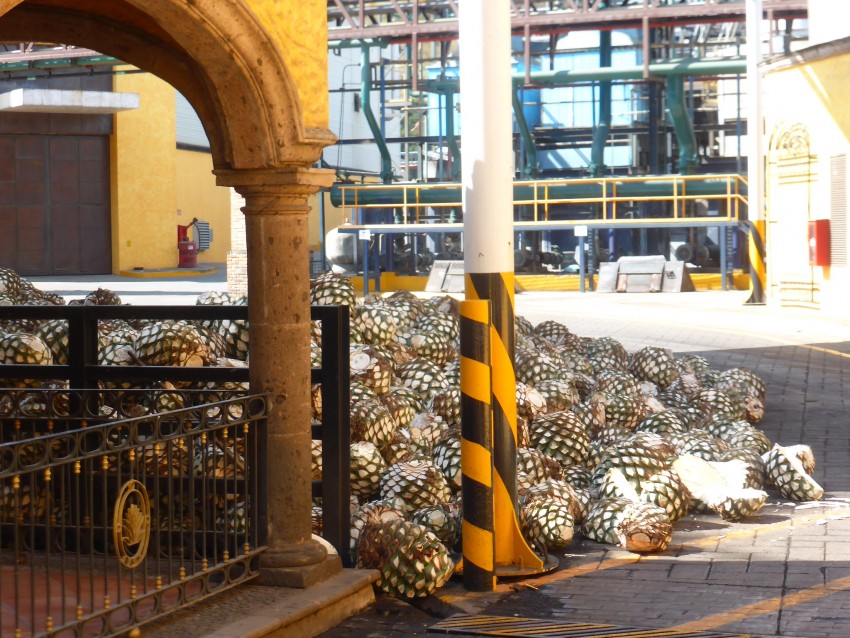 A Brief Timeline of Tequila:
1758 – Don Jose Antonio de Curevo issued land by the Spanish government.
1795 – Jose Cuervo officially becomes a brand.
1873 – Sauza company founded by Don Cenobio Sauza.  Sauza is the first to call the product ‘Tequila’ after the town in where the mezcal is distilled.
1880 – The Cuervo family bottles tequila individually for commercial distribution.  Previous to this, everyone else was still selling tequila by the barrel.
1893 – The Mexican government simplifies the name of the product called ‘mezcal de tequila’ to ‘tequila’ so that it becomes the standard name.
1920’s – Tequila makes major strides in popularity during prohibition in the U.S. as it is smuggled into the southwestern states from Mexico.
1940’s – tequila takes another major leap forward during the second World War when US distilleries switch production to war related items rather than alcohol. 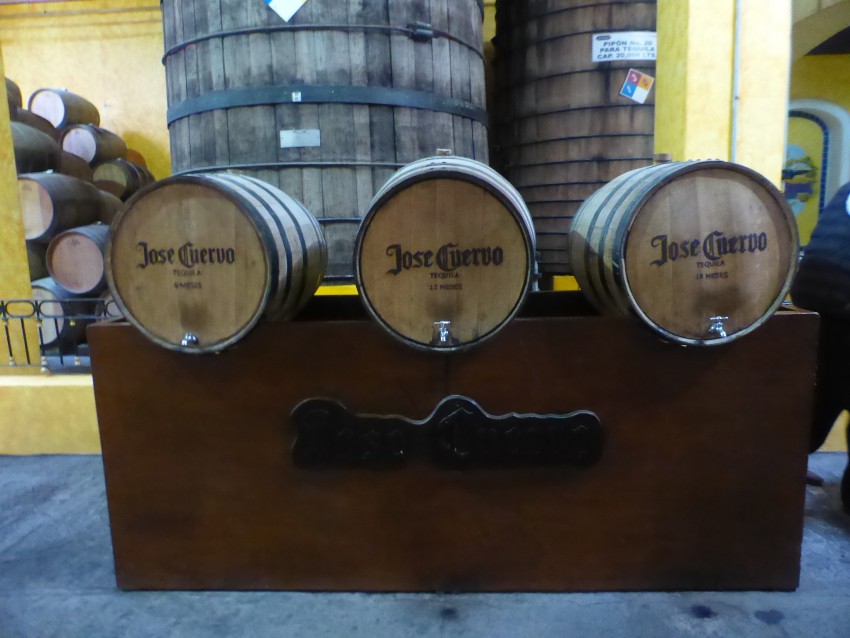 We had plenty of free samples of tequila during the tour.  After an hour we were kicked off of the tequila distillery tour that continued because we did not pay for the next tier of tour. 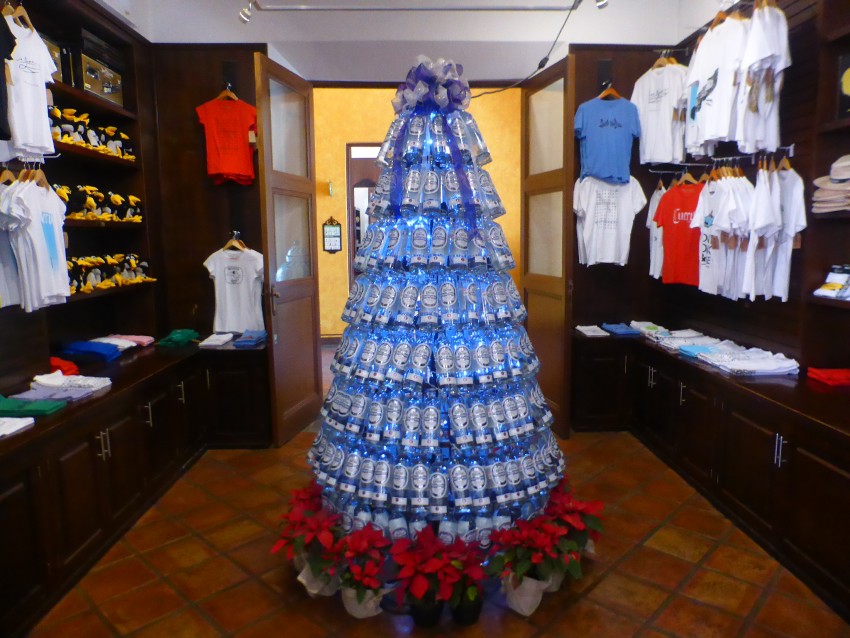 Overall, the Jose Cuervo tequila distillery tour was overpriced for the corporate feel which the experience provides…

…So, we left Jose Cuervo a little drunk, we made our way to the Sauza tequila distillery! 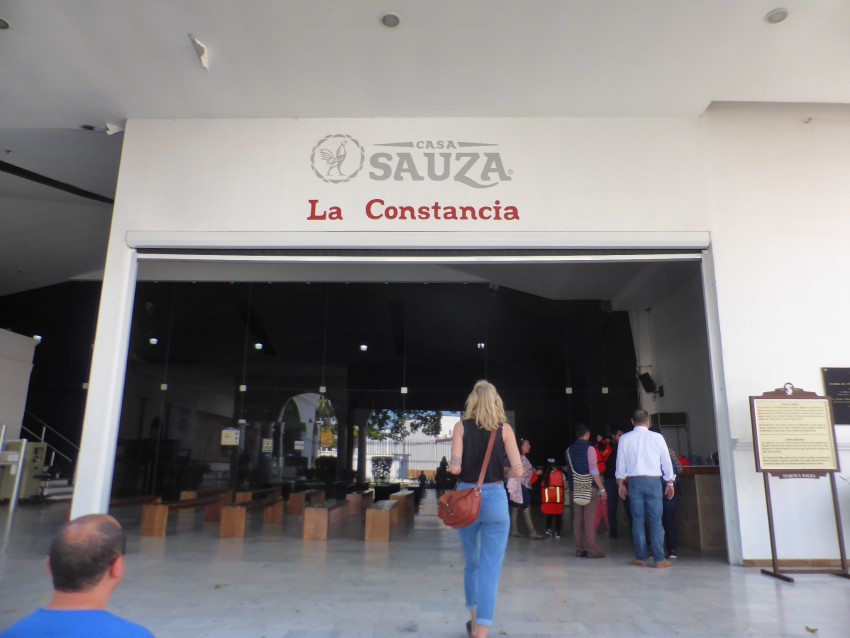 At Sauza, we paid 160 for entrance onto their tequila distillery tour and lovely Monica took care of us.  The tour felt quite intimate, though maybe that was just the tequila buzz talking. 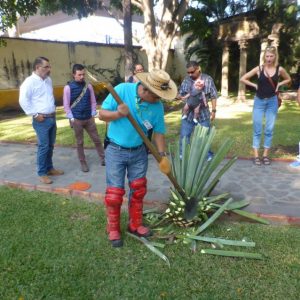 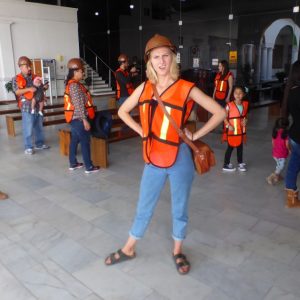 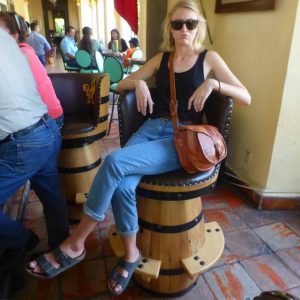 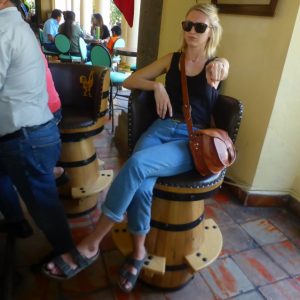 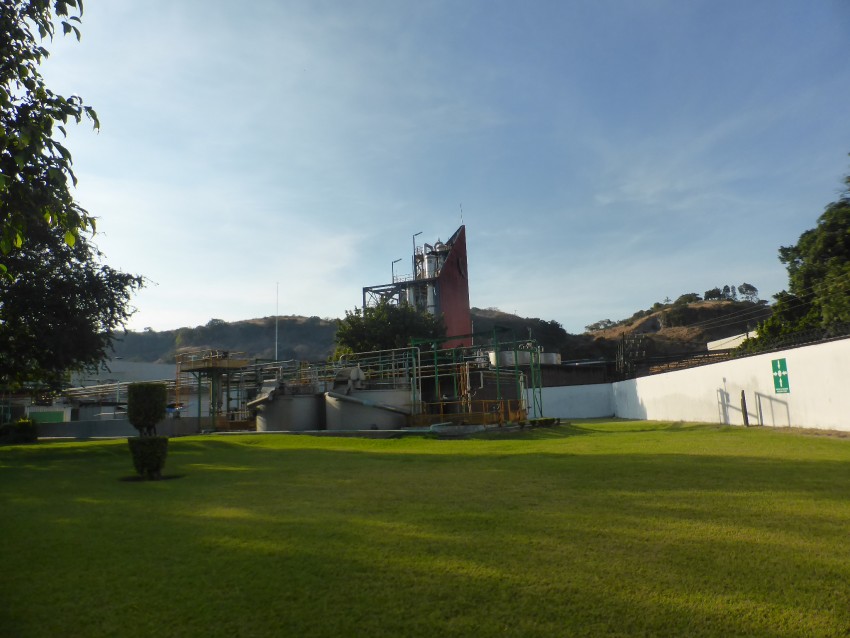 Interesting facts from the Jose Cuervo and Sauza Tequila Distillery Tour:
– In order to be called tequila, it has to be made from agave plants grown in the Jalisco state, or of the other four nearby states of central Mexico.  The other 27 states must call the product ‘Agave Stilled.’
– Agave takes 10 to 12 years to mature and ripen to be harvested for tequila distilling.
– Jose Cuervo is the oldest distillery in Latin Amerinca.
– The town of Tequila has been listed as a UNESCO heritage site since 2006.
– Agave is not a cactus.  It is actually genetically related to asparagus.
– It takes 7 kgs of agave to produce 1 liter of tequila.
– There are four presses of the agave plant.  After the forth, the remaining fiber of the plant is recycled as livestock feed, or it can be used a fabric for satchels and purses.  – There is no specific season for agave to be harvested.  According to the tequila distillery tour, the plant grows year round.
– The man who blends tequila is called the ‘Tequila Master’!  (Imagine if that if your job title! “Hi.  I’m Dave.  I sell used cars.”  “That is interesting Dave.  My name is Juan.  I’m a Tequila Master.”  Winner!)
– All shots of tequila should be consumed within 10 minutes of being poured from the bottle before they oxidize.
– Tequila that says ‘100% Agave’ is for sipping.  Blended tequila without this badge of honour is for making cocktails.
– The leaves of the agave plant left on the ground break down and after five months the indigenous collect them to make bags.
– There are four things to assess with tequila: body, smell, color, and taste.
– Jose Cuervo produces 50,000 liters of tequila each day.
– 40% of Sauza is consumed in Mexico, the other 60% is consumed globally. 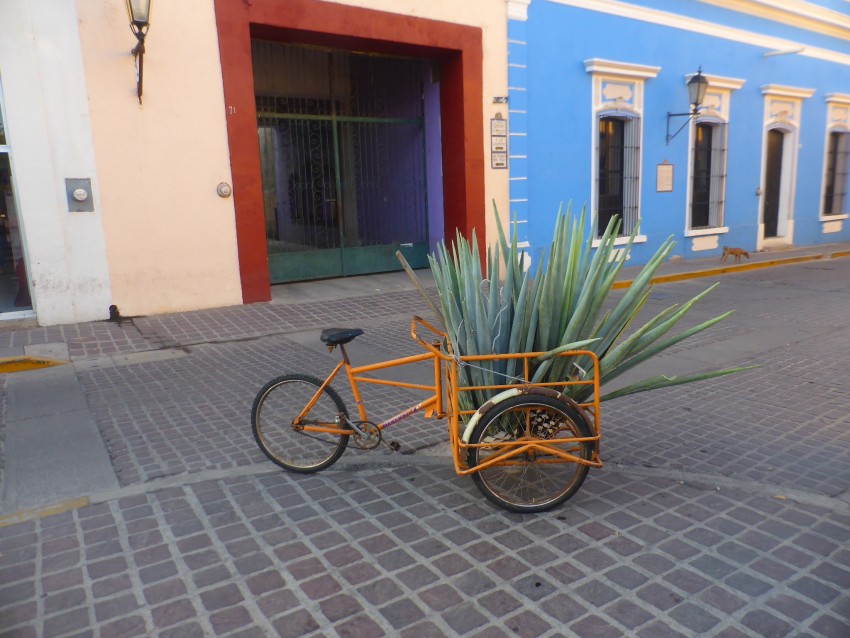 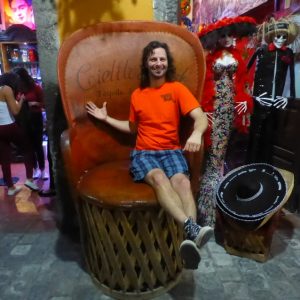 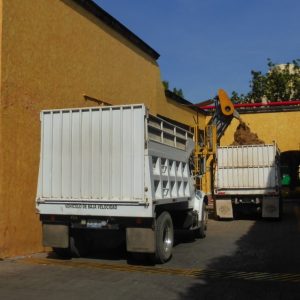 Agave fiber being trucked away. 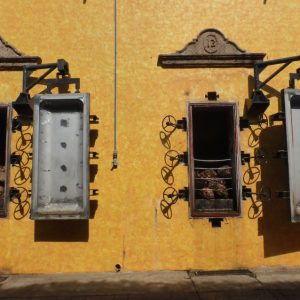 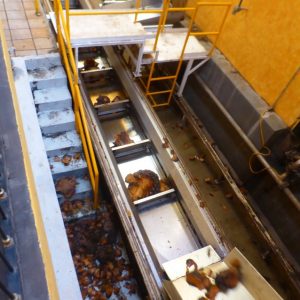 After it has been roasted, agave is quite sweet. 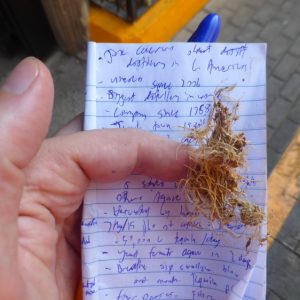 Agave fiber after the forth press. 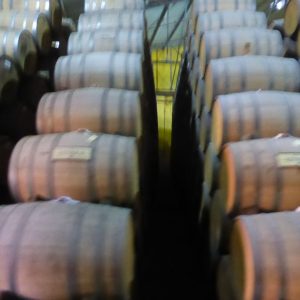 A neatly stacked pile of blackout. 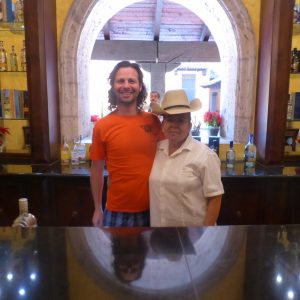 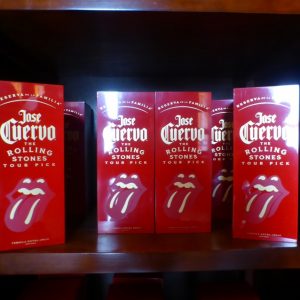 Who is buying this shit? Who is the, “Honey, I just have to have this bottle of Rolling Stones tequila!” guy? I love the Stones, but this is silly. 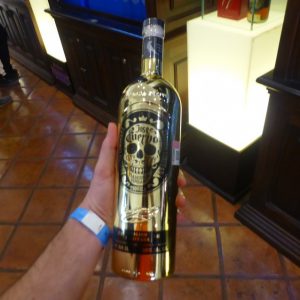 I would have liked to have mailed a bottle of this to a friend at home, but boxing and customs seemed to be a headache. 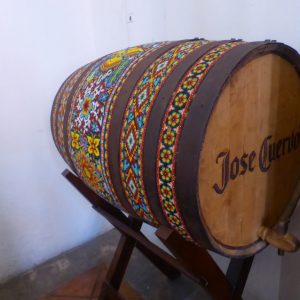 A lot of effort. 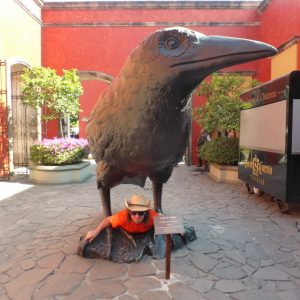 I was trying to emulate being captured here, but I was unsuccessful… 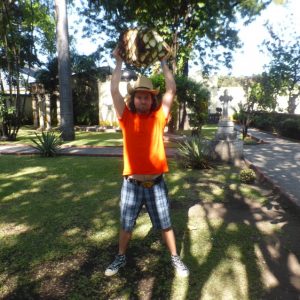 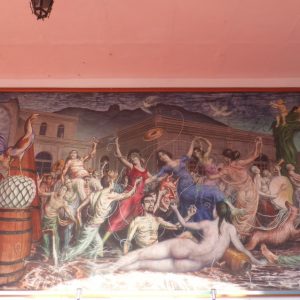 Painted at the Sauza distillery. 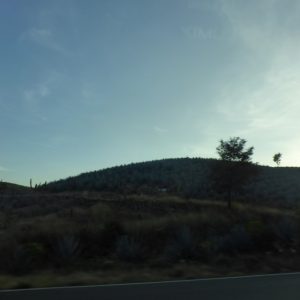 Fields of agave cover the landscape around Tequila.

“He said that he nearly got an escort last night. He told us, “I got her down the $150.” I asked him if that gets him a whole night? He responded, “One nut. That’s it.” What an expression...”
— Fort McMurray, Alberta
[View All]