San Cipraino to Bogota: Jungle Waterfalls and the Appalling French

I made friends with an American named Eric who was raised in Switzerland from the time he was 4 until he was 12.  Swiss-German was his first language that he was fluent in and he attended a Swiss-German school during that time. His family went back to the U.S. when he was 12 where he enrolled in an English speaking school.  Three years later when he was 15 his family returned to Switzerland and he could not communicate with them.  He hung out with them and he wanted to tell them about his life and how much he liked them, but he had lost the language except for a few words.  That is crazy!

My crew wanted to go with a local guide to some jungle waterfalls.  I met the guide last night when we were in search of local moonshine.  He came running off his balcony to walk with us.  Of course he had something to sell.  His services.  I have never wanted anything that someone followed me down the street trying to sell me.  We were six people and three other people came to our hostel in the morning to come on the tour with us.  Then I had to deal with a Frenchman and a Swiss woman who did not want to pay the C$5000 peso ($2.70 U.S.) price that the guide wanted for the two hour walking tour to the jungle waterfalls.  The new ‘friends’ thought that since there were now nine of us, that we should get a better price because the guide was not going to get ‘so much money.’  And they spent about the next 20 minutes trying to deal him down so that he would do it for C$4000 pesos ($2.15 U.S.) per person.  It drove me nuts.  They wasted 20 minutes of my time for $0.55.  To save that from a man in poverty.  Granted, I did not like the man in the first place, but I was willing to let him have an extra $0.55.  I really hate travelling with cheap people.

Yes, you have to be aware all the time and you have to watch your money and be weary of gringo-skin tax, but sometimes it is not worth your time.  The Frenchman was French and the Swiss girl was Swiss-French.  Have I mentioned lately how much I do not like the French?  I feel like I need to stress that again.  Go home.  No one likes you.  Take your secondary-status chip on your shitty shoulder attitude with you.

So we went trekked through the green jungle to the jungle waterfalls.  I was the only one of nine to wear flip-flops.  It is important to look at the footwear of the guide.  If he shows up wearing rubber boots, your shoes are going to get wet.  Eight other people learned that lesson today.  I did a lot of the trek barefoot because it was too muddy for flip-flops in places.  At the jungle waterfalls, we all went swimming and jumping off of rocks and trees into the water.  It was a lot of fun.  On the way back from the jungle waterfalls, everyone went for another swim, and as they were swimming it began raining.  Everyone got out of the water to find refuge from the rain under a roof.  I asked them if they did not want to get wet.  They gave me semi-shameful sideways glances.

Back in town the kids were following us around and I just felt that everyone seen us as white-gringo money and not human.  Prices for lunch were too high when we went to eat and I no longer felt like being someone to cheat so I decided to get out of town.  It was a great little stop for a day but I did not need day two in San Cipraino so I paid for the extra night of the room that I had said I would stay for, left the room to my friend Felix and headed for the motorcycle rail-trolley with the cheap French that I did not like.  I caught a hour 3 bus with them to Cali for C$20,000 and once we arrived in Cali at 8pm I got directly on a 12 hour bus to Bogota.  I decided that since I had already paid for a hostel once tonight, that I did not want to pay for anther so I just got on an overnight bus to sleep instead for C$45,000.

I had to run for my bus and as I did my cowboy hat fell off my backpack unbeknownst to me.  I heard someone yelling for me and looked back to see a pretty Colombian security guard with my cowboy hat in her hand.  I ran back for her saying, “Gracias” and I went to kiss her on the cheek.  She pulled her head back and out of the way not wanting a random gringo kiss.  It made me laugh and I ran off for my bus that I just got to in time before it left.  I was really happy that the one-eyed man who helped me put my luggage under the bus was not the one who would drive it for the next 12 hours on winding mountainous roads.  We were stopped once on the road where a Colombian policeman got onto the bus and searched the bag of a random man who was two seats behind me.  When he found nothing of note, he got off the bus and we carried on through the night.
$2.15 – Two hour jungle walking waterfall tour (French cheapened).
$4.30 – Inflated gringo-skin taxed lunch set menu.
$2.15 – Motorcycle rail-trolley return from San Ciprano to Córdoba (French cheapened).
$10.80 – Three hour bus from Córdoba to Cali.
$24.30 – Twelve hour bus ride from Cali to Bogota.

I liked their little umbrellas. 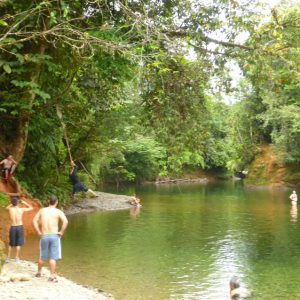 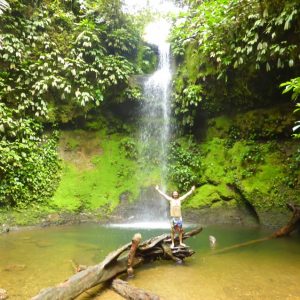 A two hour mostly barefoot jungle trek for this trickle of waterfall. 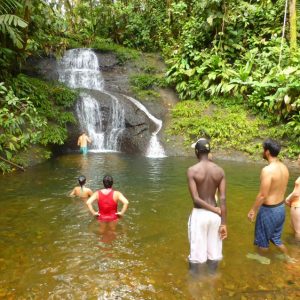 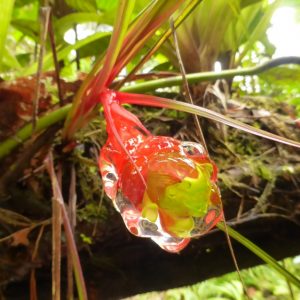 Jungle flower. It was covered in a kind of natural water liquid that looked like KY jelly, but was not as slippery. 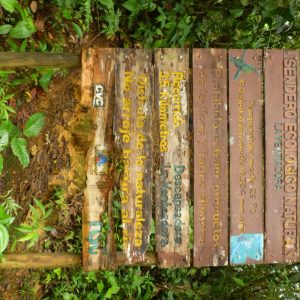 Jungle trek start. I just liked the age of the un-maintenance. 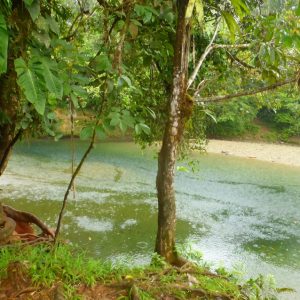 Gorgeous jungle river with the rain coming down. 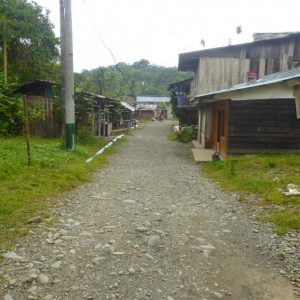 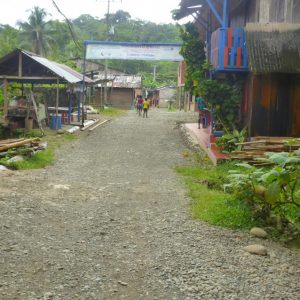 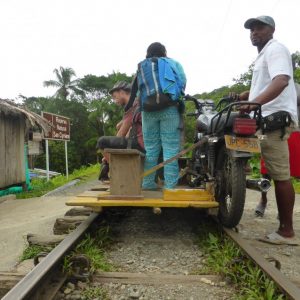 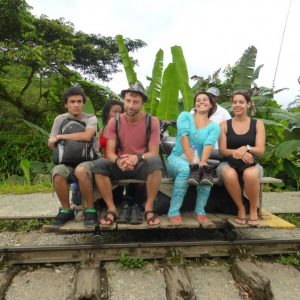 Heading from San Cipriano to Córdoba. 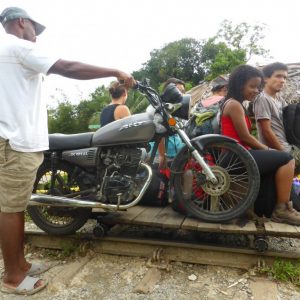 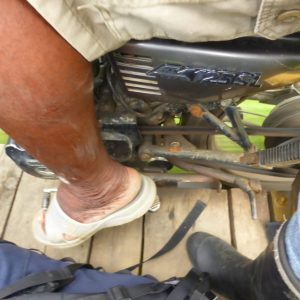 “At work I was talking my friend Gladstone who is 55 and I said to him, “Hey, I am in my 30's and when I drink water it does not seem to bother to stop at my stomach. It runs right through me and seems to go directly to my bladder. As soon as I drink water I have to pee. Does this happen with you and is this what happens with age?” Gladstone said, “I had a friend like that once. He’s dead now.” I looked at Gladstone and repeated, “Dead?” Well, Gladstone almost blew apart with laughter. He had not meant it like that and the friend of his had drown, but he sure laughed after he realized how he had said what he had said. It was hysterical!”
— Gladstone
[View All]