Well, for starters, I found out that the word ‘sperm’ is used as a swear word in Brazilian Portuguese.  You might say, “Where in the sperm is my camera?”  That is funny! 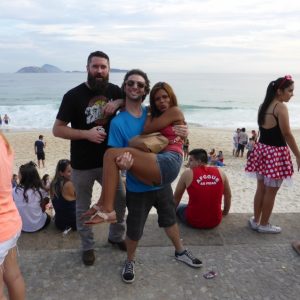 I found Scottie. And this little thing. I got to keep Scottie though…

We had lunch and then we went to meet with Scottie Duncan Smith, a friend form Fillmore, Saskatchewan, who is here in Rio de Janeiro with a girl from Saskatoon and a girl from Sweden.  So, we met up and we went on a party together.  The Swedish girl was very drunk when we met, and things could not sustain themselves.  We went for a walk around Rio, drinking beer and we ended up at Ipanema Beach.  Then, the girls decided to go swimming, so I geared down to my underwear and joined them in the ocean.  I nearly lost my underwear in the waves and I had to keep one hand on them.  By the time we got out of the water, the Swedish girl was a wreck, with protruding nipples.  I had a quick dry, and then Shanna, the Canadian girl and Christine, the Swedish girl, disappeared into the crowd and got into a taxi so that Christine could go back to the hotel.  We stayed to party.

I have fun teasing girls.  I stepped on some girls toe, apologized, and then Scottie told her to punch me in the arm.  So she did.  Then I punched her in the arm.  It was playful, and she sort of chased me down in a playful manner.  Then I apologized to her.  Then she got mad at me when she seen that I was willing to show remorse.  Girls…

There were so many great costumes.  A man in the middle of a shave.  Dudes as lady-bugs.  Men with beards in drag.  It was funny.  And it is hard to get used to peeing in the urinals and out of the corner of your eye you see pink leggings walking past in the men’s urinal section because some dude is drag needs to pee as well. 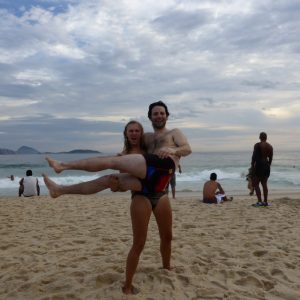 Our colors make it look like we are from different races…

We followed a blocko party around a little.  It was basically a parade and people walking behind it and partying for about 1km. We left it and headed to Vigigal Favala to a party/bbq Rio de Janeiro Favela Party that one of Csilla’s gringo friends was hosting.  Scottie and I did a roof jump between favelas and we got smashed with Irmante, on top of the roof of the bbq host’s house overlooking Ipanema Beach.  It was a beautiful view and we got to enjoy a Rio de Janeiro favela party.

By the time we went to leave the Rio de Janeiro favela party, I was pretty nervous about all of the alcohol in me and having to climb the rickety ladder to get back down from the roof, but we all survived.  Other highlights include yelling at people from the city bus we were on, and Scottie getting too close for a picture with my nipple and bumping it with his tongue when the bus hit a pothole. 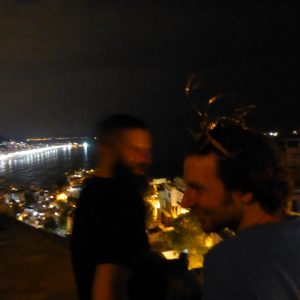 I like favelas and now I am a fan of a a good old fashioned Rio de Janeiro favela party.  Favelas have a bad reputation, but the seem safer than the rest of the city as they do not want any trouble directed to their area.  We took a a bus and got home at about 3am.  It felt like 6am, and I was pumped that it felt so late and was so early.  We nailed it today.

“I went to work today and picked on two guys who got drunk last night and slept in. One was found passed out in the other’s room, but they live in the same hotel. So, the whole crew was all over them about that today. One passed out on the couch and the other on the bed, but we ignored that fact. My best line to them today was, “I am surprised you guys slept in and the one of you did not wake up when the other rolled over.” It made for a pretty fun day today picking on those two all day.”
— Working in Fort McMurray, Alberta
[View All]