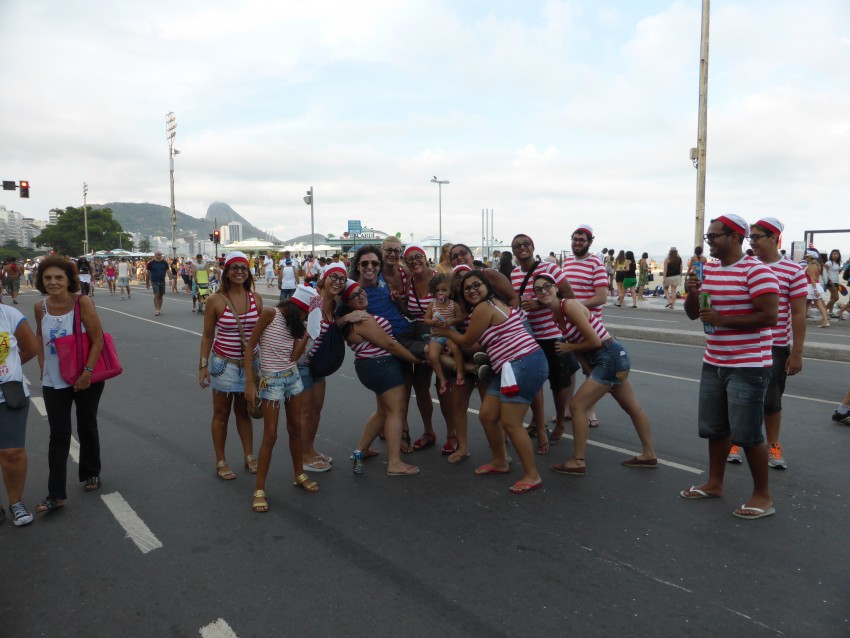 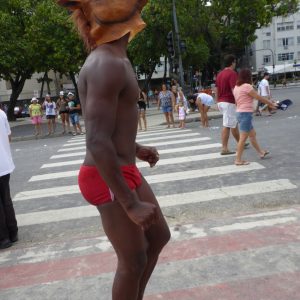 Horse Head Guy at a trot. 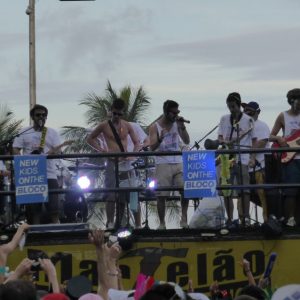 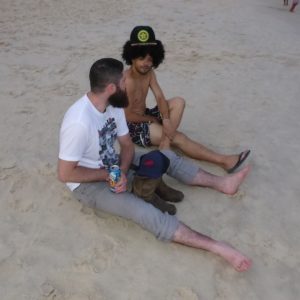 How to pee on a busy beach. Rio, Carnival. 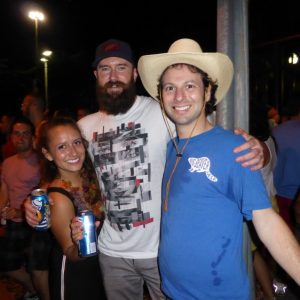 March 2.
Rio de Janeiro Carnaval.
After a late start, Csilla, Cash, Irmante and I got down the hill to meet Scottie, Shanna, and Marie.  It turns out that Christine is Marie.  I blew that.  We went and found a blocko party and a band was on a tall trailer, and they were called New Kids on the Blocko.  They played New Kids on the Block, Spice Girls, N-Sync, and Backstreet Boys.  The music was terrible, but the party was fun.  We just hung out and drank beer and danced occasionally.  Marie got too drunk again and Scottie had to take her back to the hotel.  She is a trauma surgeon in Sweden.  She must have spent her semesters studying rather that building up an alcohol tolerance.

Shanna seemed to be kind of touchy.  I mentioned it to Irmante.  Shanna and I started holding hands.  When we were separated from the rest of the crew and dancing, we made out.  Nice.  Then, when we got back to the rest of the crew they told us that they all wanted to go home so that we could get a good rest and have a huge day tomorrow.  That was right after the make-out.  Poorly executed timing by my crew.  Shanna and Scottie went back to their hotel and the rest of us went home.  It was 9pm.  I was in bed my 11pm and mildly disappointed.

“You cannot ever let someone influence you away from something that you are sure you are capable of doing.  You know you best.  Had I listened to the man on the road where I caught the bus, I would have quickly traveled down a highway and missed the beauty that was before my eyes here.  Other people are always sure they know what is best for you, but they do not.  They do not know what you are really looking for when they spew out their opinion.  They only know what they are not looking for and assume you are going to feel the exact same way about everything they feel.  So, they encourage you to miss something amazing so that you can have the comfort they prefer.”
— Life
[View All]