Palomino to Riohacha – Breaking the Group

Palomino to Riohacha – Breaking the Group.
August 7.
The Italian women said goodbye to us this morning with our American friend Julia.  I think Rosie was ready to leave us but Chiara did not really want to leave.  Those are two really awesome women that we had a great time with.  I will miss those girls.

Marc, Knut and I caught a bus from Palomino to Riohacha at about 11am.  We found a crumbling hotel and got our own rooms for C$25,000.  Sweet!  I love hotels in terrible shape.  I went into the toilet and had to pull a string hanging out of the tank to flush it.  Then when I went to wash my hands the tap on the sink fell off into my hands.

Later on the beach as we were sitting there drinking a beer, an old man showed up with an old weigh-scale that was so shitty and overused that there was barely any green paint still clinging to the metal that was attached to a large piece of plywood so that he could weigh you on the beach.  I love that kind of thing.  I love the silliness and the shittiness.

Riohacha is cheap, and there are not enough tourists for the locals to know to rip us off.  Beer are C$2,000 ($1 UDS) and kids sell bracelets for C$1,000.  There are very few gringos in town and when we see them we wish they were somewhere else.

It is a holiday today in Colombia and at a Tienda (small convenience store) Knut befriended a local who told us about a fiesta in a barrio called ‘7 de Agosto.’  The man, whose eyes did not seem to be warm, told us that he was a good guy and we could name check him with the people behind the counter.  A man who says something like that probably needs to be name-checked.  We set out to find other locals and ask them about the party.  When we found a group of people in a park and asked them how the fiesta would be, they all pretended to draw guns and shoot at us, and pretended to stab knives in their ribs.  They told us it was very dangerous.  All of the guys encouraged us to go anywhere but there.  It is difficult to take the information for certain as one bad incident is always remembered and a good incident is not, but we opted not to go in the end.  Out of the ten people we talked to about the party, only two told us that it would be alright for us.  It really peeked out interest to know what was there, but sometimes you have to listen to the masses.

We drank beer in a shitty bar and met a man from Peru who lives in Australia who told us that in the south of Mexico there are banditos who are stopping buses and separating the men from the women and children.  He said they are kidnapping the men and then taking them to a place where they give two of them a hammer for a fight and tell them that the winner who lives will do dirty work for the banditos.  It sounds like an isolated incident to me and that is exactly what the problem is, that people remember the bad and live accordingly in a re-calibrated life.  He said that now instead of bussing though Nicaragua, Guatemala, and Mexico he will now fly from point to point.  In any case, I would say that the banditos have seen the movie Django Unchained.

* “I can actually fart my way throughout the night.  I have a room to myself! Hilarious!” – Knut 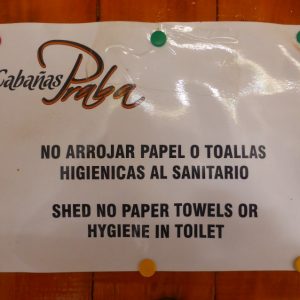 No shedding hygiene here! Ever! 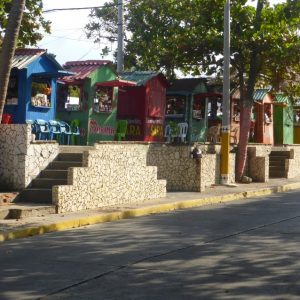 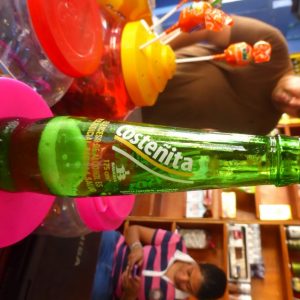 175 ml, the smallest beer bottle I have ever seen. 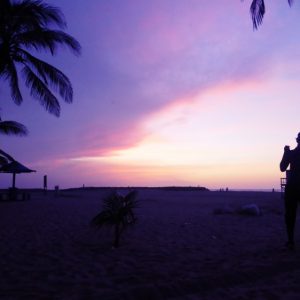 Sunset with a beach raker in Riohacha.

“I have not had a towel for a little over a week now and I have been looking for one to buy or waiting for one to steal from a hotel or hostel that I did not like.  This morning that ship came in.The guesthouse I ended up in last night was far too expensive. The girl, who was preparing breakfast this morning, was miserable and incapable of smiling.  That was enough to justify it.  New towel! I know it is bad karma, but when you are overpriced and miserable, that should nearly bring my bad move to evens.  It is tough to start your morning with a jump in your step when your associates around you are dejected. So, I left the guesthouse sort of unhappy myself, though I had made a major gain in life of a future no longer needing to drip dry...”
— Part Time Felon in Botswana
[View All]