The postal service in Colombia has been a pain in my ass.  I have had postcards I wanted to send out since I was in Bogota about three weeks ago.  A girl who worked in a hostel there told me where the post office was and drew it on a map for me.  I walked across town.  It was not there.  I asked someone else.  They send me somewhere else.  I tried again from somewhere else.  There was no post office.  I was pissed off.  I gave up because I had to meet friends.

Today I asked a girl in our hotel where the post office is at as I have postcards to mail out that I am probably going to beat home.  She directed me on a map. I found the building and stood in line with many people holding parcels.  I waited in line and had to fight to keep my place for 30 minutes.  When I got to the front of the line the woman told me that I would have to mail postcards from somewhere else.  I was pissed off.  I made the very obvious.  She wrote ‘472’ on a piece of paper and handed it to me and sent me away.  What in the ‘f’ was 472?  An address?  No street name?  Just the numbers ‘472’?  I had stood in line for 30 minutes for three numbers together and no other information.  I walked out of the building.  I am sure that by my facial expressions and the tone in my voice, all of the locals now think that all gringos are psychos because I am likely the closest most of them have been to one.

I walked outside and down the street trying to make sense of these three shitty numbers I had on a piece of paper.  I went into a shop.  I showed them the paper. I showed them the postcards.  They tried to send me back to the same place where I had stood in line for 30 minutes.  I told them in Spanish that was not where I needed to be.  Then they tried to send me some other place down the street and said a lot of Spanish words that I did not understand.  It is my fault for not being better at this language by now.  I left and a block later I entered another store and asked them.  A man seen the paper and pointed to a building.  I walked towards the building I supposed he pointed at.  A security guard at the front door told me I needed to go next door.  I entered a building called ‘472’.  Apparently that is the name of the currier service.  I stood in line.  When I got to the counter at 9:30am they told me that they could not help me until 10:30am.  I was nearly freaking out and it was apparent in my eyes.  Fucking postcards; the road to hell is paved with good intentions.  I asked the people behind the counter in a rude tone with my broken Spanish why the mail service was so difficult in Colombia.  A guy came to me with a broken ribbon from a printer dangling from his hands and pointed at the printer on the counter.  Ah.  It would be fixed at 10:30am.  I was so grumpy.

I went back to the hotel to find my travel buddies who had just finished breakfast and told me that they no longer wanted to go to Venezuela.  F!.  We were supposed to leave today and we are about an hour from the border.  Everyone we talked to last night scared them off.  Going alone would nearly be suicide so I had to cope with them and agreed to go with them into northern Guajira, the most northern point of South America.  I had been dreaming of a crazy Venezuela experience and cheap airfare back to North America.  Gone, when I was not there to defend the plans we had initially made during their breakfast while I was dealing with the shitty Colombian post and trying to send out postcards.  Great…

I had to compromise and we decided to go from Riohacha to Cabo de la Vela.

So, six of us got into a colectivo (some guys car used as a taxi) and headed for Uribia, the Indigenous capital of Colombia.  There was no room in the trunk of the car for my backpack, so I had to keep it on my lap for the one hour drive while I sat in the back seat of the car beside a huge fat woman in the middle who had a child on her lap and Marc sat on the other side of her.  It was a terrible ride.  I tried to sleep my way through as much of it as I could in hopes that my sub-par temperament would disappear by the time we arrived in crazy dirt town in the middle of the desert where houses were fenced off with giant two meter cactuses to keep out the unwanted.  My mood was only a little better, but the state of the town was fascinating.  It was a hot and very dry bustling community of cars, pick-up trucks, bicycles, three-wheeled trikes, and motorcycles where we ate goat for lunch amid a nasty stench everything rotten.  Knut and I were looking for beer while Marc was on the priority hunt for soft toilet paper as his stomach has not been tip-top in at least five days.

It turns out that Riohacha to Cabo de la Vela is a big job.  We found a truck to take us two hours into the desert to the coast in Cabo de la Vela for C$15,000 each.  The three of us loaded into the back of a pick-up truck with four others as well as; bags of cement, bottles of Coca-Cola, small plastic bags of water, containers of water, eggs, Styrofoam coolers, cleaning supplies and rakes.  An indigenous guy who was the drunkest man in Colombia also was a part of our crew until he found another truck, which fell off of two times and onto his back while trying to load a nun-cooperating intoxicated uncoordinated body into the back of the truck.  I was sure that if he remained in the back of the truck for the two hour ride he would have to be scraped off the road somewhere along our journey.

To travel into Guajira from Uribia means about one hour of a dirt road and one hour through the desert on trails made for vehicles.  There is nothing in the desert save for a few shrubs and little dusty shacks where the Wayuu, the only indigenous people of South America to never be conquered by the Spanish live. The growing shrubs appear to be plastic bag bearing trees.  All of the shrubs are covered in more plastic bags than the average human will see in a lifetime.  It is terrible to see.  Plastic and Christianity are man’s two worst creations in the history of existence.

Eventually we arrived from Riohacha to Cabo de la Vela, which is where the Wayuu believe the souls of the dead go to rest.  We checked into a hostel, went for a walk and bought beer from a ten year old boy with a cooler.  I like that.  Told my friends that I will only buy my beer from children selling them on the side of the road from now on in Colombia.

$8 – Colectivo car for one hour from Riohacha to Uribia.
$4 – Plate of goat meat for lunch.
$8 – Back of a pick-up truck two hour ride from Uribia to Cabo de la Vela. 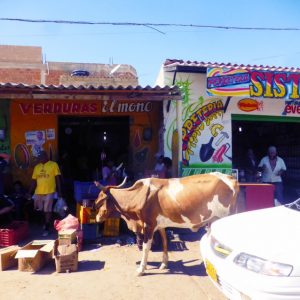 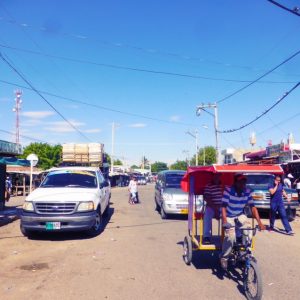 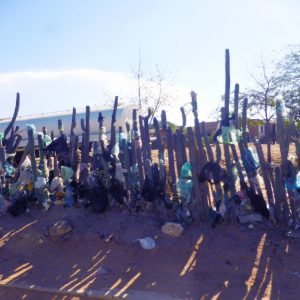 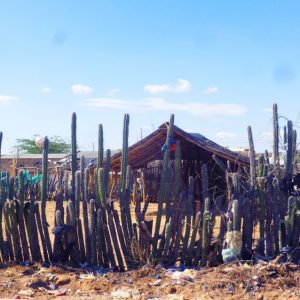 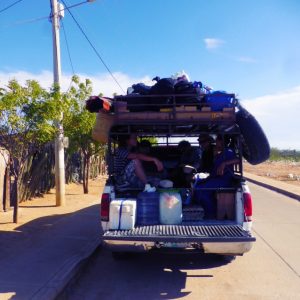 Hauling a load to the Cactus fences in Guajira desert. 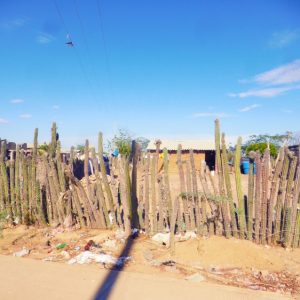 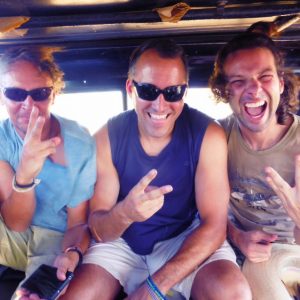 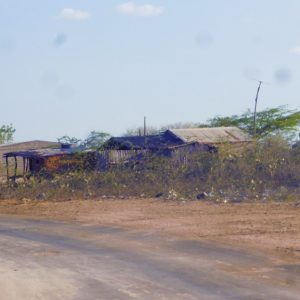 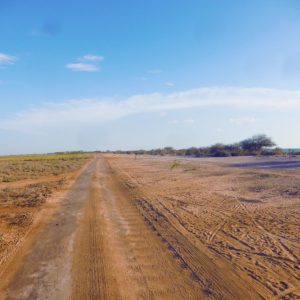 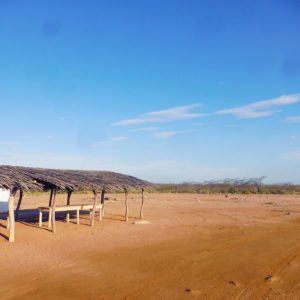 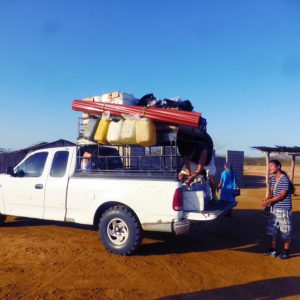 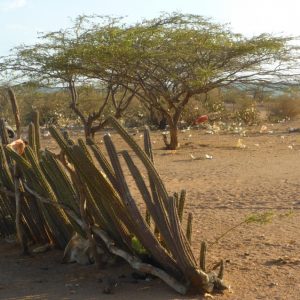 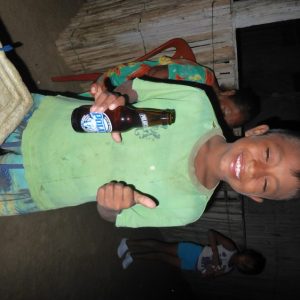 For the rest of the time I am in Colombia I may only buy my beer from children in the streets. This 10 year-old entrepreneur had a cooler full of cold ones he was hawking to passers by.

“I learned this today. Fascinating: -The closest star to our sun is Proxima Centauri, and it is a little over 4 light years away. At the speed of light, it will take four full years to get to the next closest star! Think about that for a moment... That is amazing! That is freaking far! Just to borrow the light of the neighbour's garage is 4 light years of travel. Pack a lunch! -Light travels over 10 trillion km in a year (10,000,000,000,000 km if you want to count zeroes). -The space probe, Voyager, travels at 56,000 km/h. At that speed, it would 80,000 years to get to Proxima Centauri. Just imagine the windburn (I know there is no atmosphere! This is just for imagination. You are probably not really going). Think about the time you stuck your head out the window of a car at 160 km/h...Voyager travels at a speed 350 times that speed. So, 80,000 years of imaginary windburn later, you would arrive at your destination that light had beat you to by 79,996 years.
Other fun numbers: -It takes 8 minutes for the light of the sun to get to us on earth (though some people seem to live in eternal darkness). -At the speed of light, it is four full hours to get to Neptune, the furthest planet in our galaxy (sorry Pluto, you have been bumped…) -The Earth rotates at 1,600 km/h (on restless nights, I roll over in bed at 3 km/h). -The Earth orbit of the sun is at 100,000 km/h. This rock is ripping doughnuts at 100,000 km/h! -The sun (and us too) moves through the Milky Way at 500,000 km/h. -And finally, the Milky Way moves through the universe at 1.5 million km/h (1,500,000 for the zero people!) Those are some fascinating numbers! Tell your friends during your coffee break. Make yourself sound smart! No Big Beaver Diaries reference needed (I borrowed these numbers too...just in case you thought I may have been busy with a pencil and paper figuring them out for myself).
”
— Fascinating Facts
[View All]